It’s time for the November update! I’ve been looking forward to writing this one because it’s pretty darn simple: we are ahead of schedule. That’s come at the cost of a lot of hard work across the team, though, so this update’s a little later in the month than usual.

There’s not a lot to cover, so this will be pretty short.

We continue to update https://glowforge.com/account at least once a week (and sometimes as often as once a day) with the latest information based on our team’s progress. It will move around from day to day as we enter the daily build plans and data, but will serve as a good indicator of when we’re ready to start the shipping process for you. Once you reply that you’re ready for shipment and provide us with your address, it will be up to six weeks before you receive it. We’re working through the final days of the campaign right now - there were a lot of orders at the end, so it will take a bit longer than past days.

We’re building more units than planned and dates are moving in.

I’m going to savor that and say it once more: We’re building more units than planned, and dates are moving in.

There’s a sense of joy in the air at Glowforge headquarters. Even as we’re working nonstop to stay ahead of our schedule, we pause every Friday to get together as a company, review our latest build metrics, and have a big round of applause for the number of units delivered. That’s what we’re all here for - to get your Glowforge to you, and to make it awesome.

In any case, the biggest variability right now is the split of Pro and Basic. Depending on how parts arrive, we may build more of one or the other than planned. Besides that variable, domestic shipping has been surprisingly predictable. We’re constantly making improvements large and small; for example, based on your feedback, units are shipping out in a protective plastic film bag that will dramatically reduce cosmetic issues on arrival. Pro Shields are also being shipped pre-installed shortly.

We’re moving forward on both international shipping and air filter projects. Both of these have bigger variability - we’re trying to bring them in, but there’s risk that they could slip out. If we have any setbacks or accomplishments that modify our schedule, we’ll update the delivery dates. On the international front, we continue to work through the process to get everything ready, and will start releasing units to different countries as soon as we’re able to do so.

We keep track of our major customer-facing improvements here:


Keep an eye for the latest developments.

We were troubleshooting a machine at the office and used a high-end distance sensor to measure the X-rail as it advanced during a print. It reads in millimeters. The rightmost digit is measuring hundredths of a millimeter, about the diameter of a red blood cell. (It was working fine).

A while ago, we ran a factory exercise where the focus was building at maximum speed, setting aside any units that needed additional testing for later. I took this picture of the resulting rework pile of units waiting for a little love and attention. It reminded me of a famous scene from a movie… 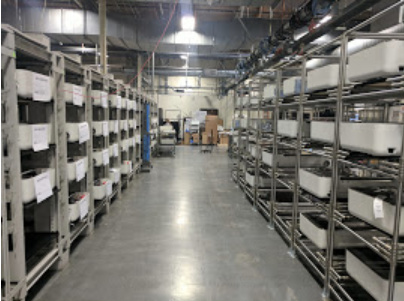 Ark of the Covenant, awaiting processing: 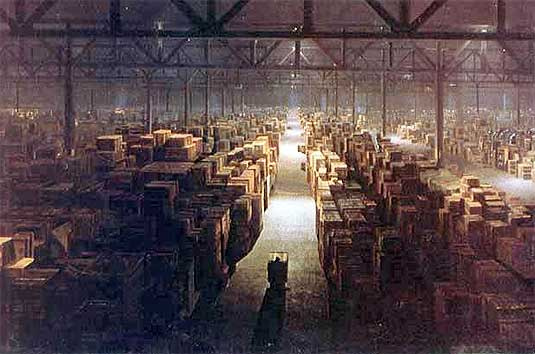 I used to use the pictures section of these updates to highlight neat stuff we were making at the office, but… you all are exceeding our ability to keep up!

We’d love to hear your thoughts in the discussion topic here. We’re hard at work making your Glowforge - and making it better. Thanks as always for your feedback and for being a customer.

60 Likes
Frustrated, from the UK
Should I have received the Pro Shields? (if unit shipped Nov 15)