Tonight had some colleagues over for dinner given it is finally BBQ weather. They came with their 5 year old and 11 year old, both exhausted from a day’s activities. Given most of the talk was adult talk, they were getting restless and cranky.

Asking if they enjoyed drawing, would they want to make their drawings and place them in a laser? Well I hadn’t used the trace function, but sure seemed the time to do it. When you are used to CAD or even trace/expand/fix in AI, GFUI trace is so easy (albeit somewhat limited)…

Absolute hit of the party. The kids were mesmerized and hitting “the button” (I did remove the army of the 12 monkeys escutcheon since that was a tad creepy for them) was pretty exciting!

The 5 year old took it all in stride that you could even do this (I mean sure why couldn’t you just laser cut something you draw?). Once I traced her drawing, we cut it out of cherry (first piece of proof grade that came out of the stack) and then I ran over to illustrator because it really needed to be mounted, and cut a rectangle with her name (misspelled since I let her spell it - right letters wrong order) and the CA glued the drawing (her holding a balloon with a card saying love next to it) onto the maple square 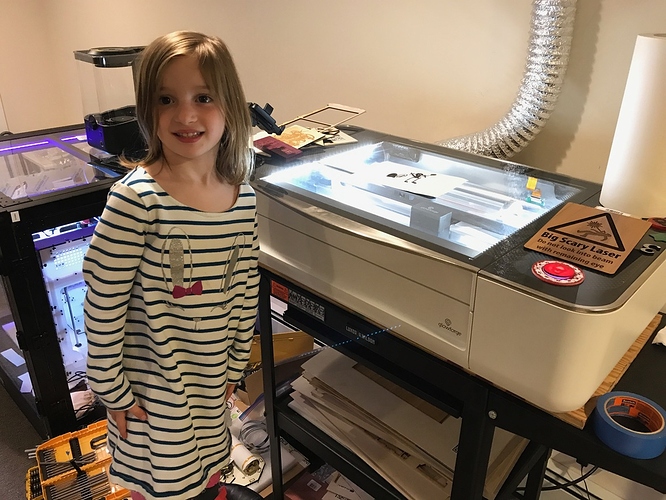 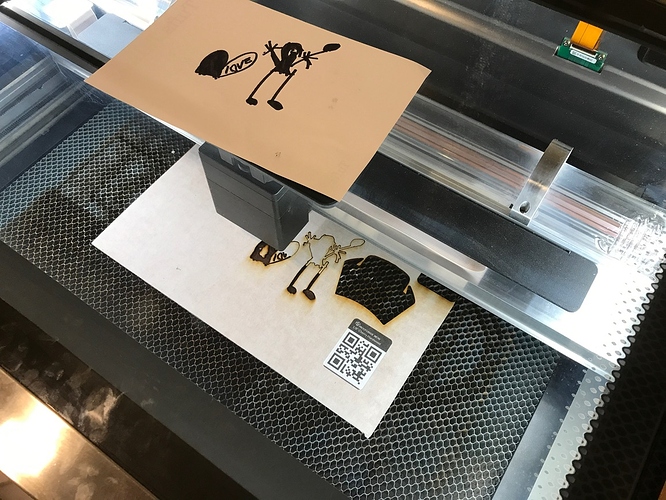 Her sister did a cutout horse galloping and then we mounted that on a walnut backing for her teacher. 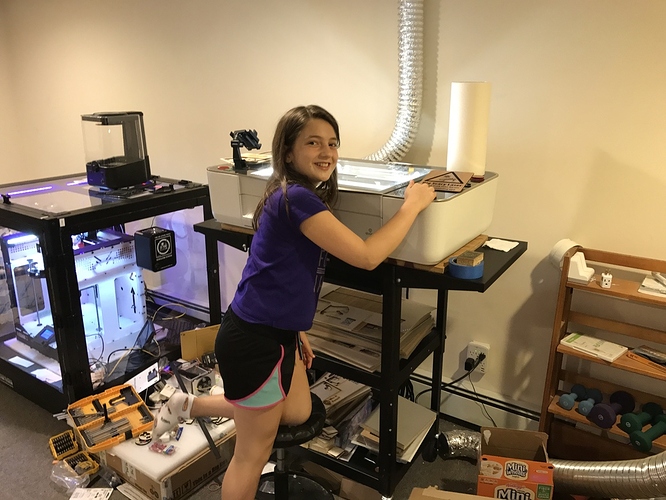 This kept the kids occupied for a good hour of extra adult time, and while the adults had to endure a bit of laser exhaust (but the smoker and grill were going too, so I didn’t worry since we had apple wood smoke from one side of the deck and cherry and walnut on the other…)

By the way the mini-wheats box is of course scrap ply for the GF… (that’s really heavy dense cardboard!)

It’s so awesome that the 5 yo just assumes that technology will work this way. When I was 5 nobody had walked on the moon yet (but it wasn’t long after that) and we certainly didn’t expect this kind of tech (or cell phones, etc.)

I think I could keep myself entertained in that room for more then a few hours. Between the GF and the 3D printers I could keep busy for a few days straight.

Throw in a cot, minifrig and a bucket and you could be there for weeks…lol

I saw the enclosure you have for your 3d printer. Where did you get it?

the enclosure you have for your 3d printer. Where did you get it? Yea I just looked at the prices. I would rather just build a stand at that price. Thanks for the quick reply!

Looks like the party was a hit for all concerned!

What kind of 3D printer do you have?

I remember when the twins were confused and annoyed because I couldn’t print them an iPad.

I like the way you have your E3D Big Box printer inside a very big box!

Looks like even a five year old can draw better than me.

What kind of 3D printer do you have?

As @palmercr notes, it is an E3D BigBox Dual Hybrid, which at some point I plan on converting to IDEX but haven’t had the time.

Yea I just looked at the prices. I would rather just build a stand at that price.

I got it when they first debuted and it was cheaper on a special, and was way overkill, and unfortunately on my model the feature I most wanted was never shipped (the pre-heat which had a 400w heater blower to preheat the box to print in tweakier plastic, but I guess there was too much fire risk). The filtration system is nice, since I print in nylons and other high-temp polymers mostly, which I’d rather not breathe

I remember when the twins were confused and annoyed because I couldn’t print them an iPad.

Put that in the hopper!

My three year old got really frustrated tapping on Grandma’s CRT television and wondering why he couldn’t bring up PBS kids. Technology taken for granted.

my favorite is the video of a baby trying to pinch to zoom on a magazine.

I’d be lying if I said I’d never done that, mostly on engineering drawings that are printed a little too small but I’ve done it on other things too…

If magazines survive and we all stick around long enough I really suspect this will work some day.

sure but at that point it’s less a disposable magazine and more of a simple tablet.

true but with incredible battery life and weight I’d want it if I could actually use it as an open tablet and not just 1 magazine.