Just got my Glowforge Pro last week. After being pretty happy with the small cuts I made, (the ruler and plague). I decided to make a frame jig for another project i am working on.
However it turns out that the corners are not square. 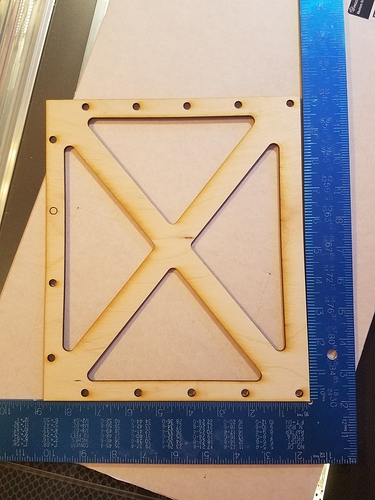 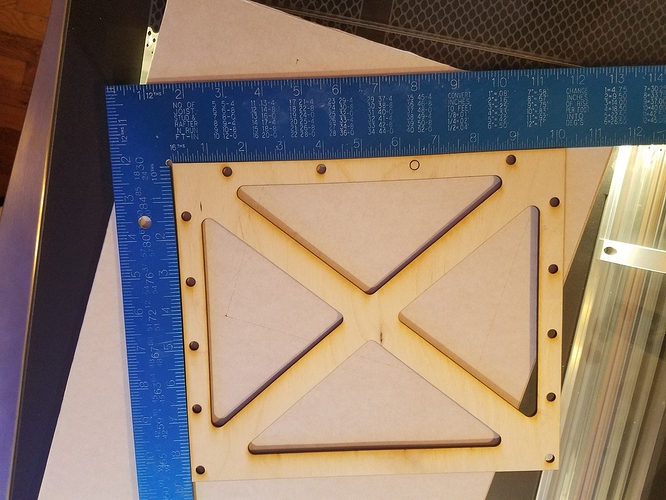 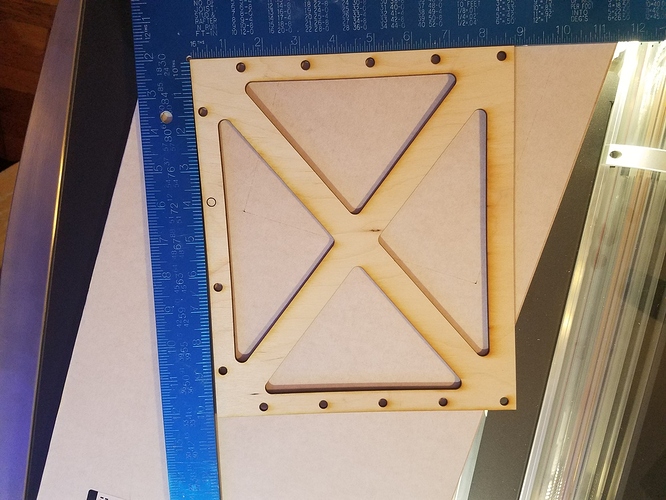 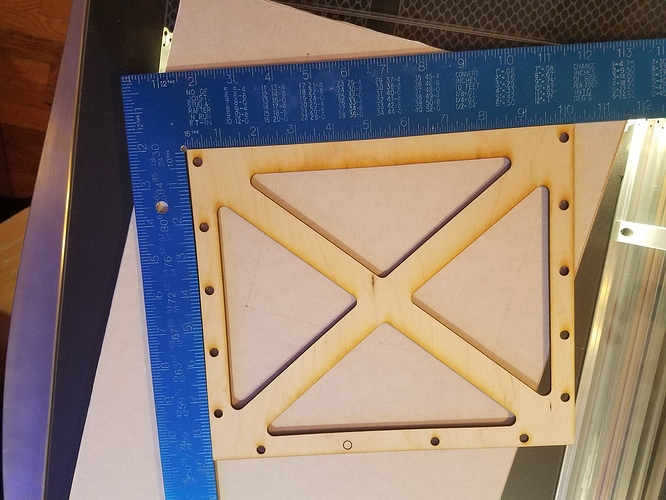 You can see the gaps between the square and the baltic birch frame I cut. This was my brace.svg file cut about 9PM eastern yesterday.

The material was flat, the unit is on a flat level surface, the crumb tray is in its divots, there is no debris in the divots, tracks or belts.
I read the forums about turning the machine on and rolling the gantry back and forth and centering the laser head under the camera. I did that about 5 or 6 times. Each time I made a very fine (5%) cut of a square shape on some draft board to see if it changed. That process did seem to work somewhat, but the cuts are still not square. I made another cut of the brace.svg cut today at around 1PM, this time on medium draft board. 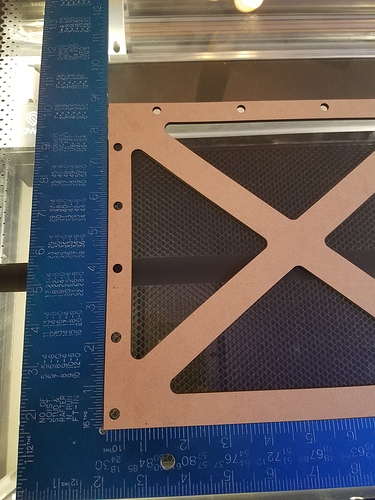 You can see the difference when I overlay the first baltic birch cut over the draftboard cut. so the gantry did shift, but not enough. 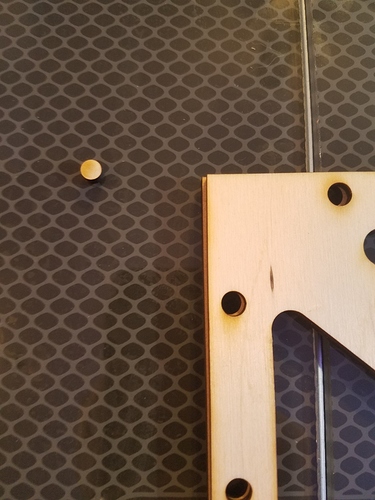 Not sure what I should do at this point. I have seen some post where people mention that they manually squared the gantry them selves, but don’t really see a way of doing that?

This is a question I would like an official answer to: Does the GF have a way of actively squaring the gantry? It is starting to look like it doesn’t, which I find astonishing.

I’d like to see if there’s an official answer to this myself.

Thanks guys, I definitely wouldn’t mind adjusting something if it’s allowed, vs shipping it back.

Just curious did you secure the piece to the bed either with magnets or pins? Might it have slightly moved due to vibration during the cut? Just a thought

I’m certain they didn’t shift. I actually cut more than one of the baltic birch frames. And they all came out the same. It’s when I put them back-to-back that I realized something was off. And kept an eye out for shifting when doing the square test and last cut on the medium draft. All of them were not square.

Looking at the side plates of the gantry, you can see two screws that appear to hold the belt clip in place. I’m not sure if those are just to hold the clip or if they allow you to adjust the belt. I would think there would be a way for a user to adjust and at some point replace the belt? Don’t the belts stretch over time?

Timing belts have steel or Kevlar reinforcing, so they should not stretch over time. In 3D printers they do wear out after about 3 years of 24/7 running but a 2D printer doesn’t rack up the same mileage.

OK, Thanks,
How long does it take for a Glowforge Staff Member to respond to me?
It’s my understanding that I only post here, and not send an email. Correct?

How long does it take for a Glowforge Staff Member to respond to me?

Up to three business days. But hopefully they’ll get to you sooner.

Also, make sure your square is square.

I have run into cheap squares that are not square and cheap levels that are not level. Use the 3-4-5 technique to check your square, expand it to maximum multiples of 3-4-5.

AND combination squares that are not square. It happens.

P.S. Just got a hitch last week and the flanges were not square!!! Had to bend them with a 20 ton jack to square them up. We leave in a cheap world today.

I had the same thought. You can also check the square by scoring a line along an arm with the other registered on a straight edge. flip the square and check against the first score.

I thought about explaining that method, but my words were not as concise or clear as your explanation!!! You must have run into some bad tools too!!!

Also, make sure your square is square.

Yes I’ve been caught out by an unsquare (is there such a word?) square. I always try to buy the best tools I can afford but still get stung on occasion.

I have a rather nice (and accurate) vernier gauge, which for the life of me I can’t find. So I was taken in by hyperbole, and fancy packaging, and bought a cheap digital calliper gauge to replace it. Apart from eating batteries it also tells lies, which has put me off them somewhat.

Thanks, but the cuts are not square. when I flip the piece over, it does not fit back into the hole it was cut out of. 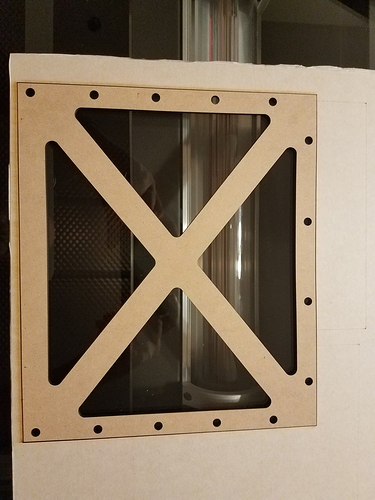 DraftBoardFits.jpg866×1154 282 KB
Draftboard does not fit when flipped: 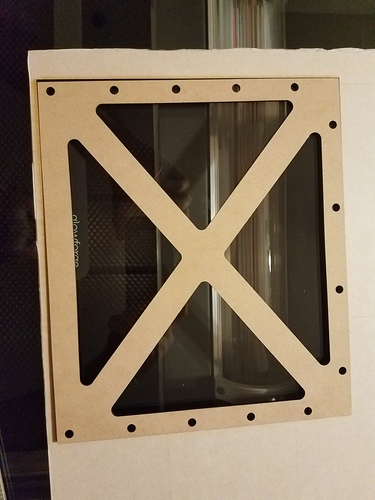 DraftBoardDoesNotFit.jpg866×1154 248 KB
Back to Back wood Frames on straight edge leaves a gap at top: 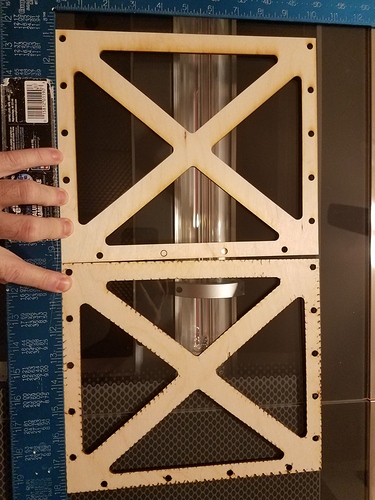 BackToBack.jpg866×1154 361 KB
Drawing a line from the inside edge of the blue square and flipping: 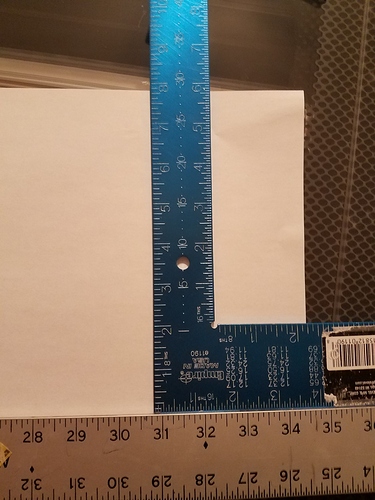 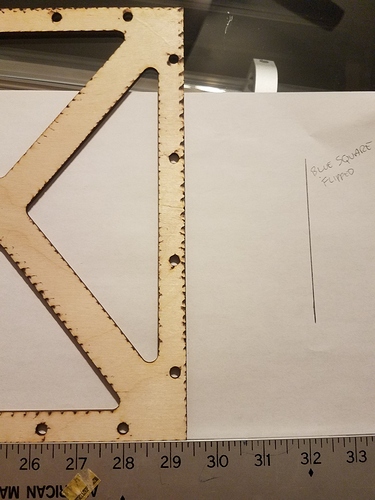 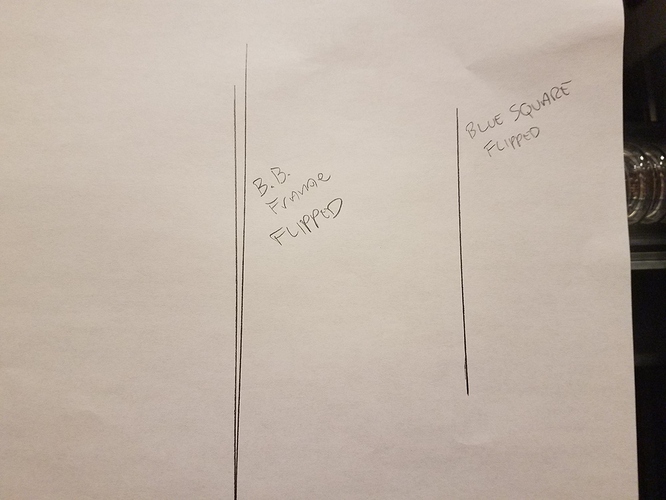 My experience with a V wheel gantry is that there is plenty of angular play, so you need two limit switches and home each motor separately. Or perhaps you could bump both ends off the back endstops to square it.

The GF motion plan has only one step bit for Y, so I don’t know if it ever moves them independently during calibration even though the hardware is capable of driving them separately.

This is probably remedial, but have you tested another design for squareness or double checked the file? More than once, I’ve accidentally selected a point and moved it, and not edit undo-ed back far enough (some programs edit-undo a move one nudge at a time). An easy test is if you rotate it 90 degrees. If the cut error rotates too, it’s likely the file.

palmercr,
The Right side of the gantry will push back about a 1/2" further than the left side. At least on my machine. So no real way to square it off by pushing it to the back. I agree, it looks like if there was a way to advance only one of the Y motors, one would be able to make it square.

erin,
Yes, I was originally making a U shaped frame from acrylic (to hold baffles in a fish tank sump). I noticed they weren’t square, and thought maybe they warped or something due to heat since they are acrylic. So I made the wood frames to hold them square. It’s when I matched them up, that I realized the machine cuts were not square.
After that I did a bunch of very lite scores from a simple square file. So i tried 3 different files and none worked.

This is very serious. No word from GF yet?