Exhaust fan not starting every time Problems and Support

As stated in my earlier closed support request (with no further contact to me) my fan starts 90% of the time. There are a number of occasions where my exhaust fan doesn’t start running until 10+ seconds after the laser is cutting. It tries to start (speeding up and slowing down), but doesn’t get to full speed right away. Any update from @Rita on a solution?

When was the last time you cleaned the Fan?

Thanks for reaching out again. Unfortunately, I don’t have any updates for you regarding the delay in the fan starting.

Just to clarify, does the fan ever not run at all during a print? If so, that’s another issue and I’ll look into it separately.

It will usually start eventually, just a multi pulse and then run after ~ 10 sec.

Seeing how gummed up the head fan was and how much I have tried to clean up the passages to the exhaust, I am wondering if the exhaust fan could get similar issues.
@markwkruse, have you had any issues with the head fan not blowing properly?

Once it finally does start, it runs normally for the duration of the rest of the print without any issues, removing smoke as required. Most of the time it starts and runs correctly (90% of the time). The secondary exhaust fan removes most of the smoke on its own so its not an issue, however the Glowforge exhaust fan shouldn’t be doing what its doing. The intake fan has never failed to start.

My fan may very well have material on the blades, but I haven’t looked. Assuming that it was an item that would require servicing, you would expect Glowforge to provide an easy way to do it, called out in a manual somewhere. I am aware that there are people who have posted a fastidious cleaning regimen, however I’m not that kind of person. I clean the laser lens surfaces as called out in the manual and that is all.

Thank you for that information.

If the blades are particularly dusty, we’ve prepared instructions on how to clean them here: https://glowforge.com/support/topic/cleaning-service-and-moving/cleaning#cleaning_exhaust 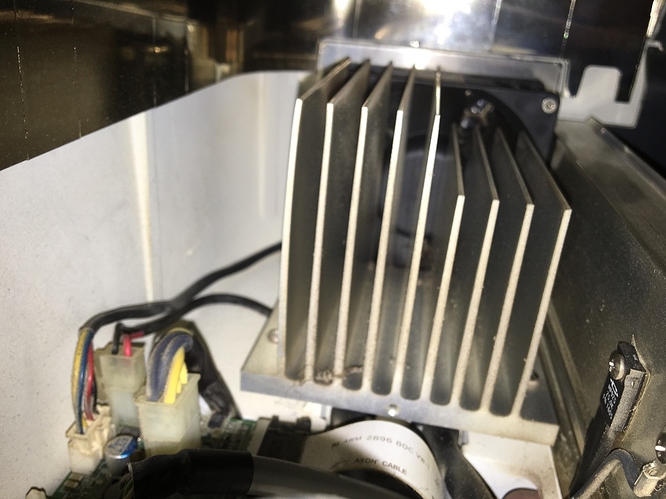 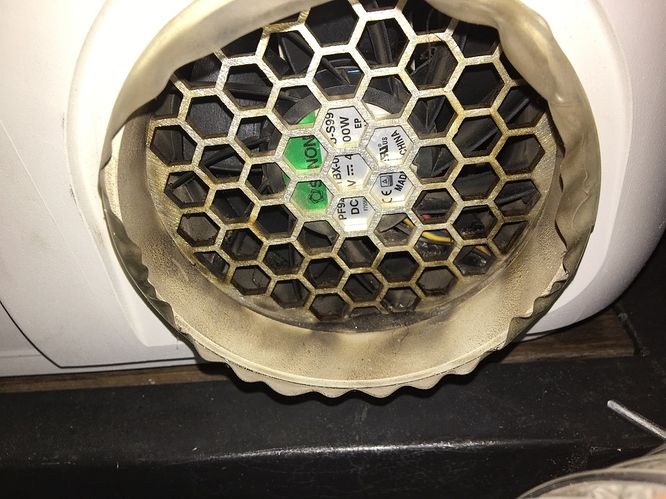 The fan doesn’t look particularly dirty. I haven’t kept a journal to log event occurance timing, but my usage pattern is typically 2-3 times a week (mainly weekends). I think it occurs after it’s been down for approximately a day, but I’ll keep closer track if you’re working on it.

Thank you for that photo. I had not looked deeply enough there to see what was happening.

When I did I see it was pretty bad and needed attention. 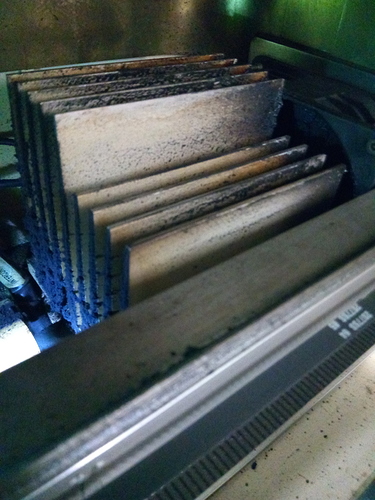 I set about to clean and vacuum all I could reach and indeed the build up of gunk was not a pretty sight. 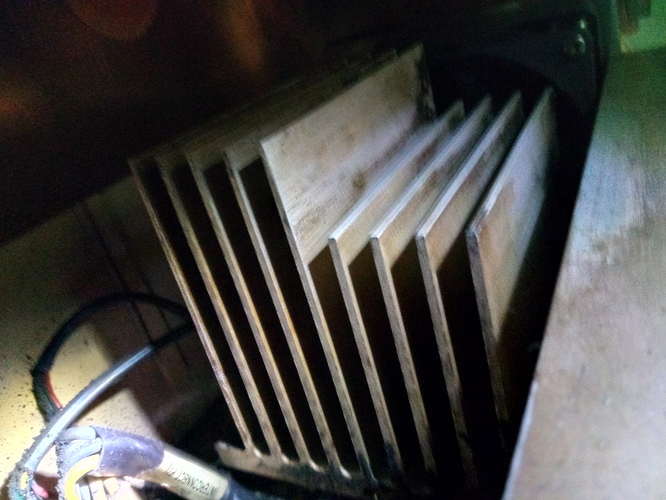 Hard to see much but there is less gunk and near crumb size particles blocking the flow .

Can you explain both the location of those heat sink fins, and how you managed to get such a clear view of them ?
It looks like my fear of the fins getting coated in gunk is borne out, and might go some way to explaining several over heating issues people are having.
John

Thank you for the photos and information @markwkruse!

I’ll keep looking into this, and I’ll update the thread when I have more information.

That heatsink is only on the Pro. Part of the Peltier cooling system. The fins are immediately before the exhaust fan on the back left corner.

Thanks, and yes I do have a Pro, so I think that for Pro owners, at least, that’s cause for concern.
At least it looks to be accessible for cleaning !
John

No. It’s fairly inaccessible. Same as the inside of the exhaust fan.

how you managed to get such a clear view of them ?

Amazing what you can do with a cell phone camera and a flashlight. It was @markwkruse that made me realize that you could get such a picture

I am rethinking getting one of these …
https://www.gearbest.com/microscopes-endoscope/pp_272879.html?wid=1433363&currency=USD&vip=4452823&gclid=CjwKCAjw14rbBRB3EiwAKeoG_277FhRf-_RrkAGmxxYozN2PRl-FDss1PKzwxUjNrSivh_SOUn9DfBoCYZcQAvD_BwE

I had one that was not compatible with my equipment and resold it but it could be really useful here,

Yes, I think that’s a ‘must have’ at that price.
John

I’m very sorry for the delay in getting back to you.

We’ve been able to reproduce this on units in the office and the team is looking into it.

I used it last week, and was keeping an eye on the exhaust fan operation. As you had suggested as a possibility, the first cut had an exhaust fan start with a delayed response in starting up. Subsequent starts didn’t have the delay. (This is just 1 day’s worth of cuts, so not a conclusive cause/effect).

Thanks for continuing to look at it.

We haven’t forgotten about this, and while we don’t have any announcements yet, the team is still looking into it.

Thanks. It still seems to be occurring both at the start of a cutting session as well as in the middle on occasion.