Hello! First, let me say congratulations on creating a fantastic machine! I LOVE it!

At the same time, I am experiencing an image shift that is not an alignment issue. I have attached several photos showing where the GFUI image is clean and laid out properly, but when cutting, several parts have ‘shifted’ when cutting. This has happened twice. With the same basic file, but not an exact repeat of the problem(different lines shifted).

First incident shifted small easels I had butted up against a long rectangle. These easels were the only thing shifted, and one not only shifted, it squared off a rounded corner. Very strange. (See images Shift1-A, B, C) 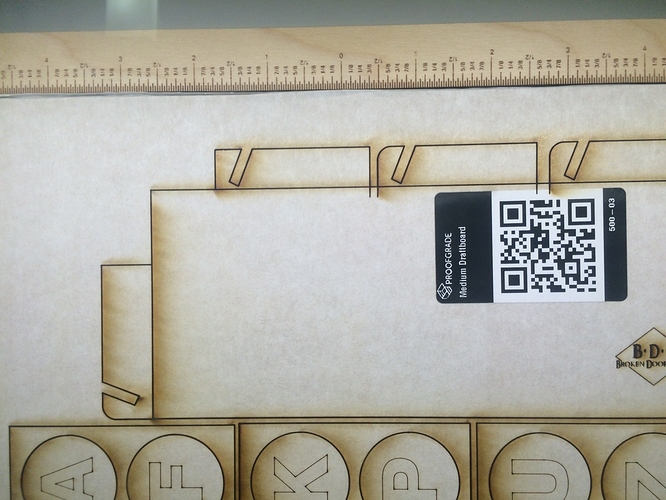 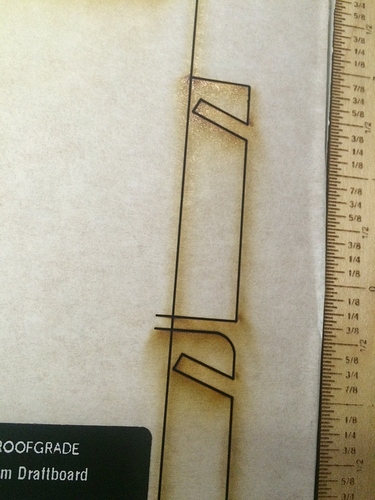 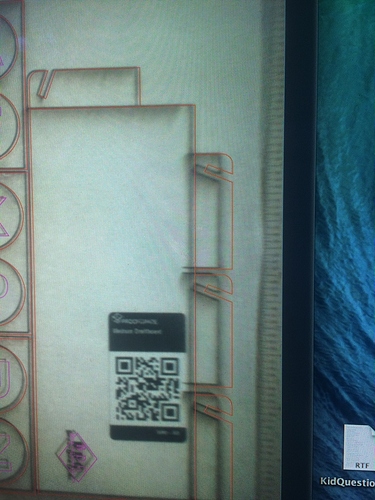 The second occurrence shifted the large rectangle and a random circle elsewhere on the file. (See images Shift2-A-B-C) 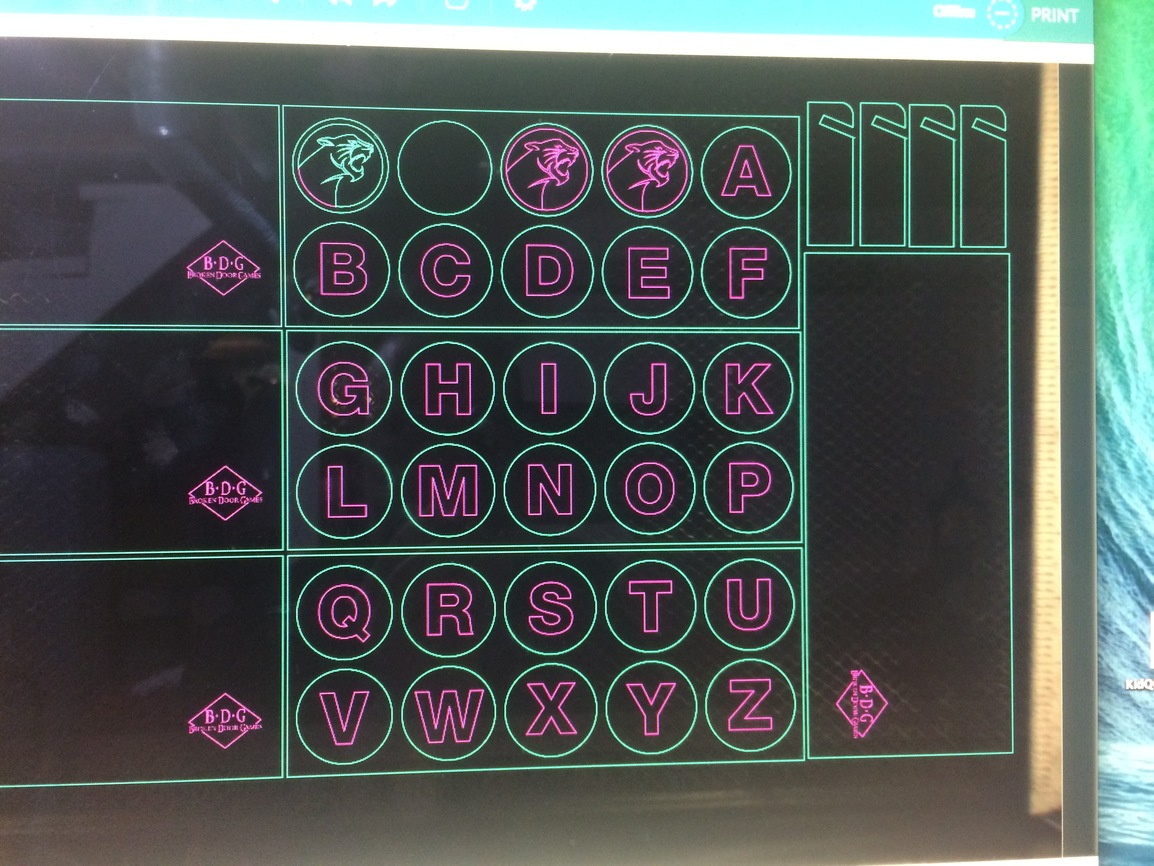 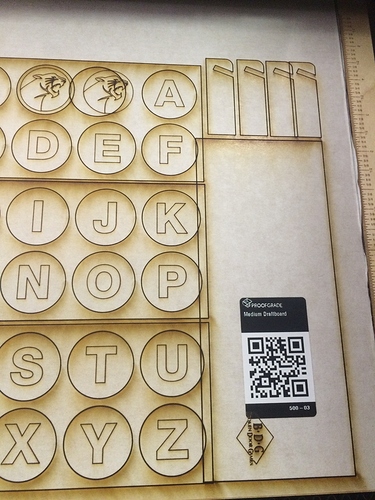 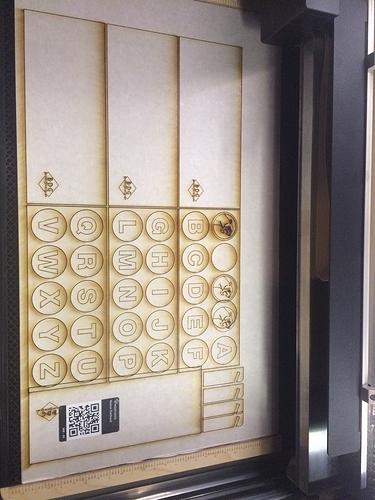 These files were the same base file, with only the difference between them was the easels being moved. It also appears only cut lines were shifted. In both cases, ALL of the cut lines were on the same step in the GFUI. (Same stroke thickness and same color within the SVG.) There were only 3 processes, Engrave, Score, and Cut.

These were initially set to Proofgrade cuts for Medium Draftboard. I did however slow down the cutting speed by about 10 points due to other projects not cutting all the way through on the first try (also proofgrade materials - slowing the speed on those worked to completely cut through on subsequent cuts). These did not cut all the way through. Some of the circles were cut enough to ‘pop’ out (basically perforated), but the majority of the sheet was useless.

So my problems are 1) images shifting at the cut stage(it appears something is happening between the UI to the machine, or within the machine). And 2) proofgrade materials not cutting all the way through with default settings. I am confident the lens is clean and the materials were flat.
(Note: I have submitted this to support@ and have received a ticket #.)

Thank you! And again, I was not being sarcastic with the congratulations. The Glowforge is an amazing machine.

I look forward to hearing from you soon and hope this can help others who may have experienced the same thing.

There have been others who’ve had a similar shifting problem, especially on the right side of the machine. You might do a search of the forums just to see if any of it is helpful. I can’t remember ever seeing the squaring issue before, though. That one might be new.

Hopefully someone knowledgeable will pop in soon and help you start troubleshooting. It usually doesn’t take long

I had something very much like this happen, but I was never able to reproduce it, so GF support suggested (and I can’t disprove it) that I accidentally dragged a part of the design in GFUI before ‘printing’. Now that the designs are saved by GFUI, you could perhaps go double check that the aren’t any parts moved inadvertently?

I searched and found shifting, but from what I gathered, everything was shifting, not just random lines.

That is what I thought happened Laird. I figured I mucked it up, but when I checked the UI, all was normal. I’ve included photos showing the screen of the UI.

The shift occurs at the first object to go too far to the right. Everything after that is shifted left relative to what came before.

This shifts do appear to be incremental in the second incident. First the ‘easel’ shifted maybe an 1/8", then the rectangle is shifted more, then the circle even more.

The sequence/selection of shifted objects makes no sense. And the easel wasn’t the farthest thing to the right, it was the box. And everything was clearly ‘fitting’ on the UI (nothing grayed out). I wonder what constitutes “too far to the right.”

One of the best things about the GF is being able to maximize layout and material conservation… this definitely hampers that.

This sort of shifting around isn’t a normal occurrence. If it’s specific to a design, GF support can hopefully figure it out. If your GF is ‘drifting’ as it cuts, across many designs, that sounds very wrong to me.

Trying to keep up here.

Did the misaligned cuts all happen after the head went “too far to the right,” or did you see a sequence of correct, incorrect, and then correct cuts?

If the former, sounds like an issue seen before, where the head bumps the side, and stays off track after that. Presumably, they know about it and it’s being worked on.

If the latter, it’s a much more interesting problem. I’ve seen files that don’t cut as expected with no physical explanation, and wouldn’t be surprised if more such bugs show up.

I wonder what constitutes “too far to the right.”

Nothing should be if the GFUI allows it but on some people’s machine the head hits the front right corner and another the X idler pulley had dropped causing the head to stall anywhere on the right.

It is possible to get more than one hit and more than one shift if you have several things on the right, each a bit further over.

This topic will get closed shortly since it is already being worked on in email.

The symptoms here are textbook arrested motion to the right causing all subsequent motion to be too far to the left. As @palmercr points out, the two causes we’ve seen for this are head collision with something on the right (for example, gantry and rails not quite square to the case leading to head collision with the front door) and the other was binding caused by the right front pulley on the gantry being too low (belt not parallel to the rail). Both of which are hardware issues that seem to generally require machine replacement though at least one user fixed it himself.

There is a possibility of miscalibration due to mispositioning of the camera or bad data causing the coordinate system to be skewed to the right, but so far I don’t think we’ve seen that on the forums.

I don’t believe there has been head collision, simply because wouldn’t that mean lots more of the cut lines would be shifted to the left? Though this is clearly an issue on the right of these burns. And, I was not watching the machine when these shifts occurred. I was at the computer in the room, but not physically watching the burn.

I am curious about the ‘hardware issue,’ particularly if it can be handled on site (by me). I’m not afraid to tinker with clear instructions.

So… in the interim while I wait for “official” support, I believe what I’ve learned here is that if I want to maximize sheet usage, I should do it to the left, and stay at least a few inches away from the right… correct?

Thank you everyone! A bit nervous about maybe having to return the machine, but so stoked with this community!

I don’t believe there has been head collision, simply because wouldn’t that mean lots more of the cut lines would be shifted to the left?

Only the cuts it made after the collision that it probably had when doing the cuts on the extreme right.

I’ll burn a test on some scrap tonight… moved over to the same area and watch for a side collision.

Thanks for letting us know about this - the photos and details have been very helpful. We appreciate your patience while we looked into it. Unfortunately, we’ve found that your Glowforge has an issue we can’t resolve remotely. I want you to have a reliable unit, so I’m recommending we replace this one. I’ll be in touch via email to sort out the details.

I’m so sorry for the bad news.