I was merrily cutting along when runs began going astray. It seems that the head is no longer tracking correctly. On the first bad run it went through most the job before wandering off. On the following run it wandered off near the beginning. When the laser beam left the material entirely, I shut it down. Once it goes off path I have not observed it finding its way back. It was working fine before, so I don’t think the problem is in the data file.

So I’m out of commission at the moment. I see that similar things have happened to others.

Hello! First, let me say congratulations on creating a fantastic machine! I LOVE it! At the same time, I am experiencing an image shift that is not an alignment issue. I have attached several photos showing where the GFUI image is clean and laid out properly, but when cutting, several parts have ‘shifted’ when cutting. This has happened twice. With the same basic file, but not an exact repeat of the problem(different lines shifted). First incident shifted small easels I had butted up against a…

This sounds like it could be the same problem.

Alignment, WAY off Problems and Support

circles score seem smack on right, so it doesn’t make sense that material thickness or tray placement were incorrect

This does not. My data was generated by rhinoCAD6, and the job is all lines.

Design cutting/engraving is shifting while in print Problems and Support

[IMG_4702][33%20PM] I’ve had this problem twice now, with several different prints. Last time I didn’t take a photo of this, but this time I was ready…hahahaha!! The design has shifted mid-print, and you can see from the red circle that it not only shifted from the overall circle area, but also shifted horizontally. Any idea why this is happening? The first screenshot is what the design should’ve been (screenshot from Adobe Illustrator.) All areas for cutting and engraving are indicated with…

This also looks like it could be a similar issue.

I also checked the movement of the gantry and head with the machine off. Everything seems to move smoothly, no obvious hang-ups or sticky spots. Also, we recently were cutting some proofgrade birch and the cut line seems to have come out as a score. That’s probably not related, but it was odd. I double checked the setting in the UI and it was indeed set to cut.

Shifting of Design Problems and Support

Oh, no it’s not, you’ve got that cable twisted… hang on…let me see if I can find a picture - you don’t want any kinks in it… I just took a picture of mine… disconnect the tabs at the head and then lay the cable so that it looks like this: [IMG_4489] It folds back over on itself before you plug it in, so that it can unroll properly inside the tracks. Bet that’s what’s causing it to hang up when it hits the kink in the cable.

Here’s another one. This was the result of getting the cable to the head twisted during a cleaning. So, that’s not my problem. 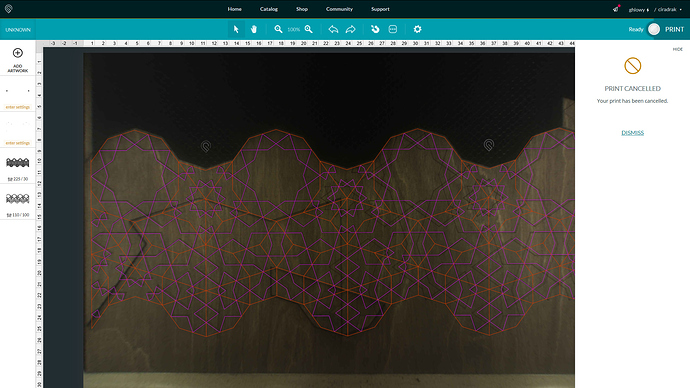 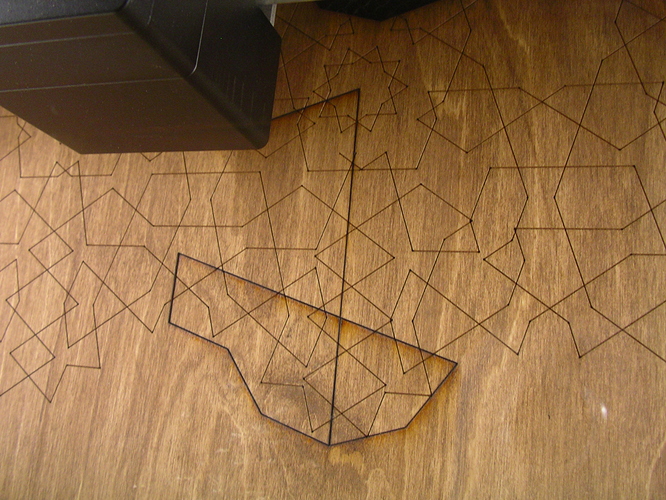 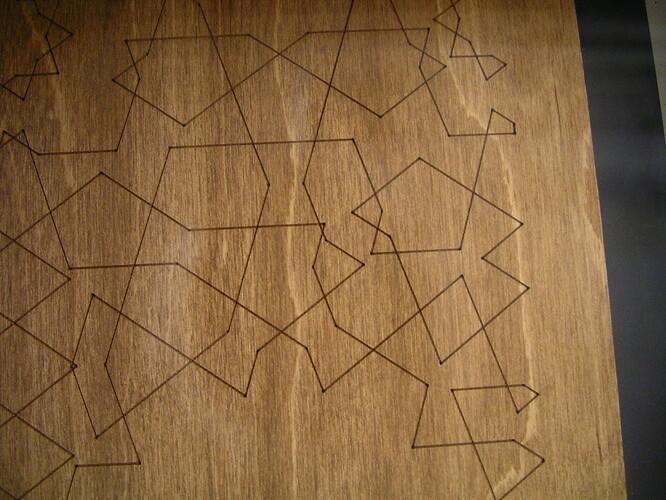 With a mirror and flashlight…check underneath the gantry (laser arm) all along the belt to make sure there’s no debris in there. Then do the same along the left and right belts and examine the pulley wheels. Finally check the tracks, and make sure there’s nothing under the wheels. That hidden image looks like it hit something or hung up on something. Once it hits something and skips, the rest of the cut is going to be off.

If you don’t find anything…support will probably ask you to print the Gift of Good Measure on Proofgrade so they can check the results. (They can’t diagnose issues on non-Proofgrade materials.)

Doing that ahead of time will save you some time. Try to place it in the spot on the bed where the skipping is happening.

Wow! Thanks for the fast reply Jules. (Your posts are always helpful.) I was able to start looking at this on Saturday night and now have something to report.

Looking carefully at the toothed belts, tracks, and wheels; they seem to be ok. No major debris or problems. I then cleaned everything out using vacuum and compressed air to get rid of dust. I did notice some rather deep scratching on the rails, but I do not see how this could have occurred during operation as the gantry and head elements don’t touch there. So I guess this was something which happened during manufacturing and doesn’t seem to be a problem. 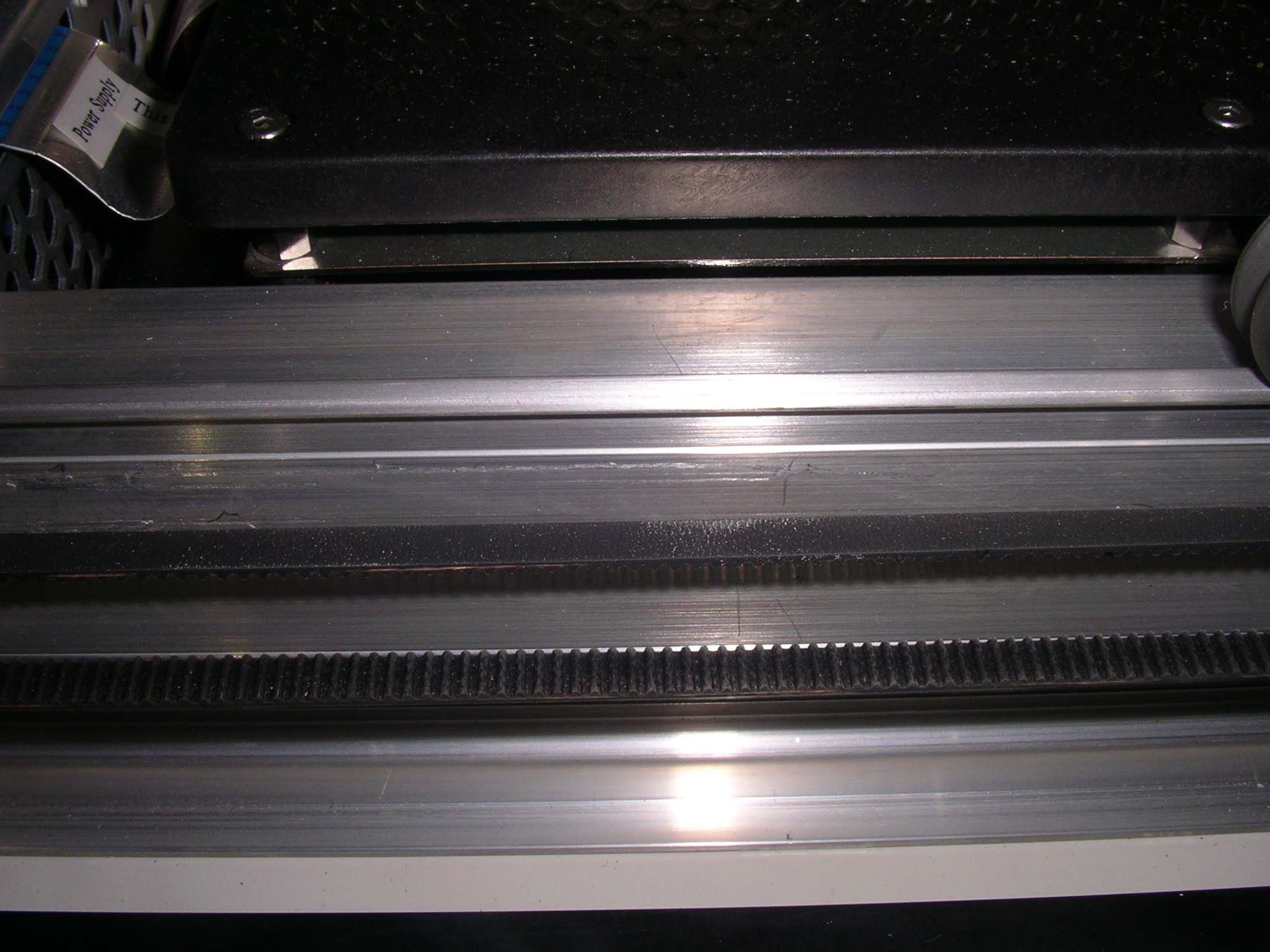 I analyzed the output from the two failed runs. On the first run it went through the score but shifted over to the left about 4mm during the cutting phase. After it shifted, it stayed shifted. 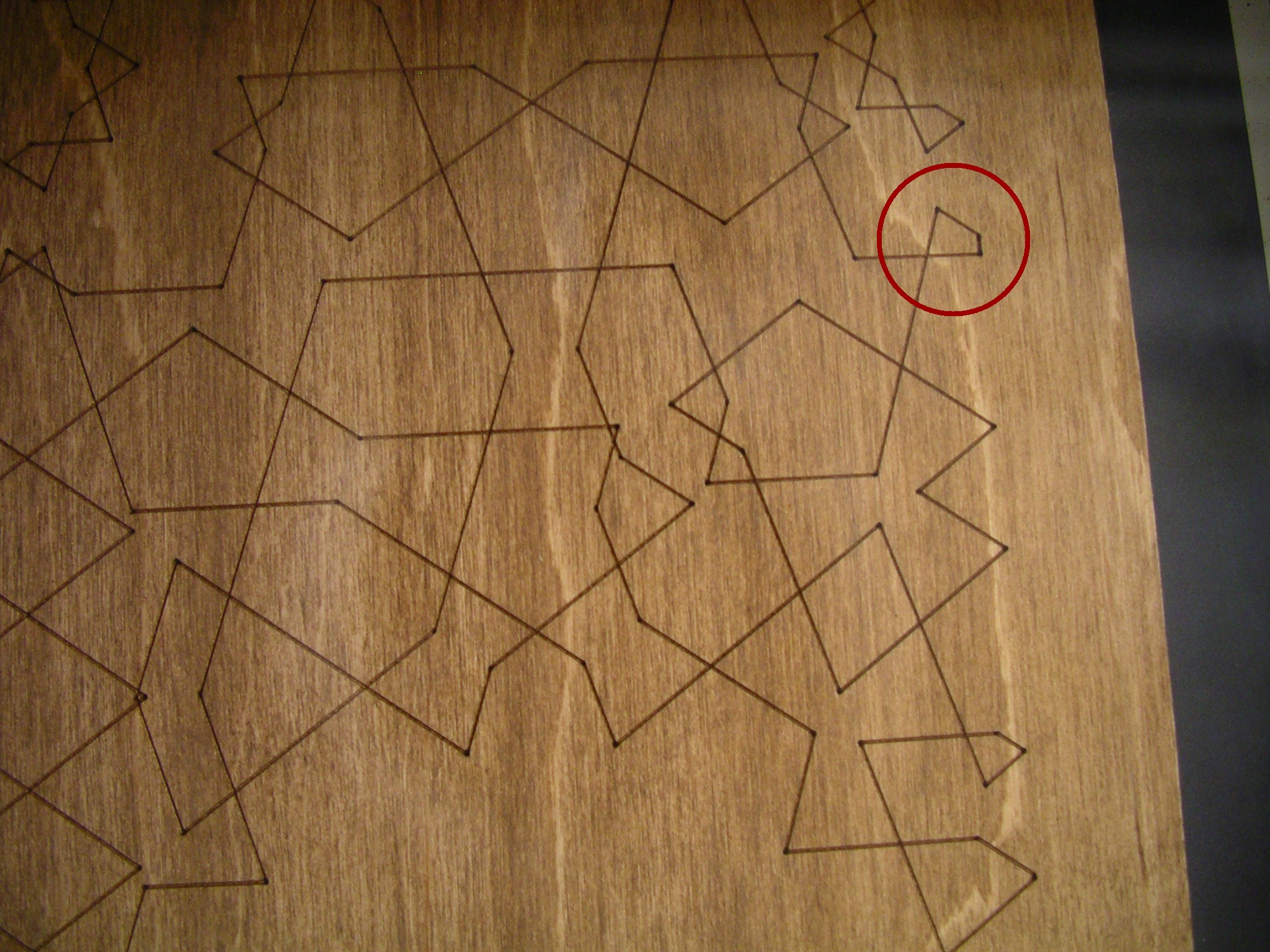 The laser entered horizontally, and should have continued to the right ~1mm before turning up at a 36 degree angle. Instead it stopped abruptly and made a 90 degree turn left. The wood piece is aligned internally with the machine, so the relative location of the board has not changed with respect to the machine. It seems that when this happens the data path is being pushed all the way to the left edge of the cutting space. 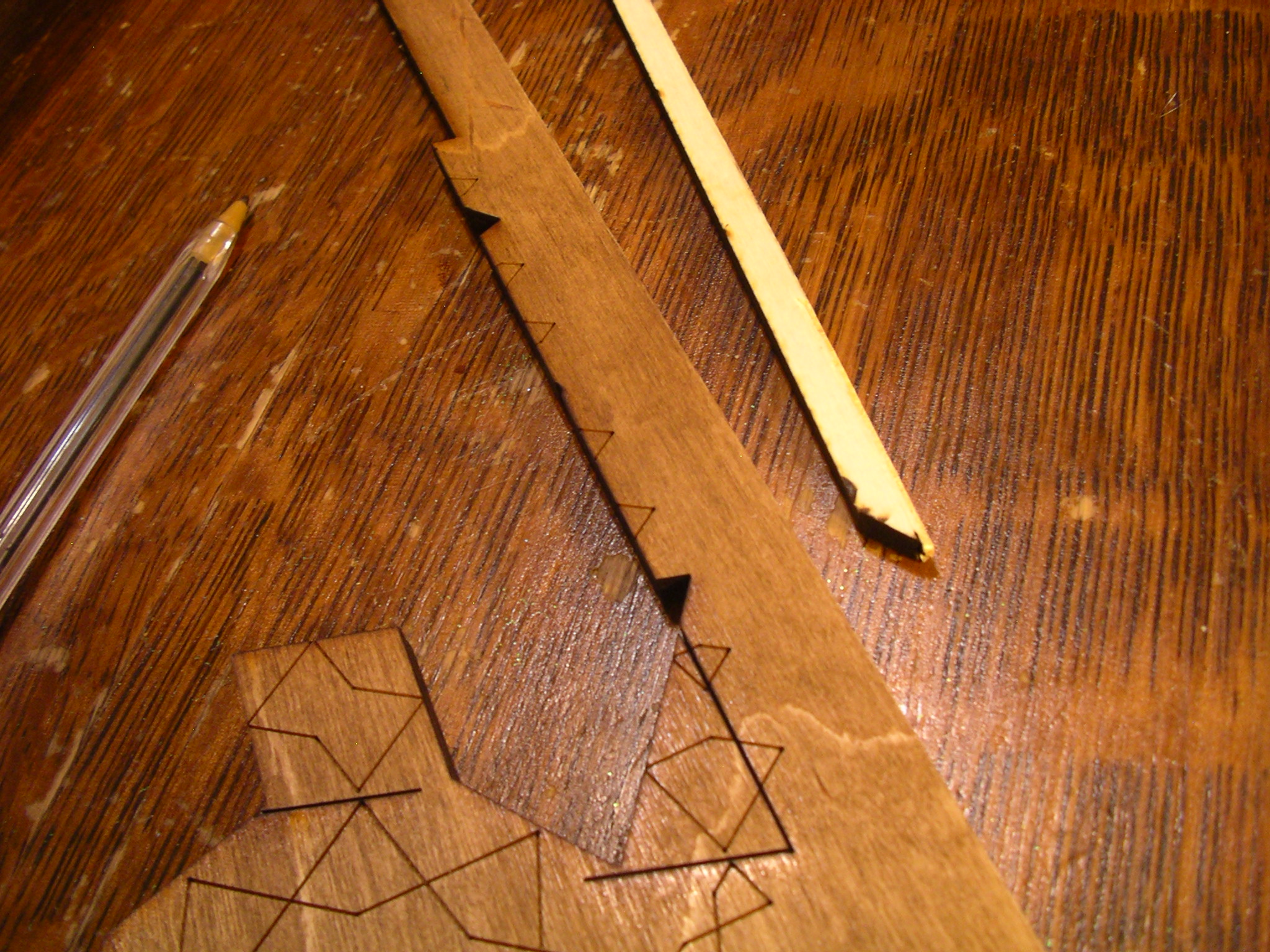 I cut some giftOfGoodMeasure rulers from draftboard along the right hand edge. It quickly began having problems with the engrave. At first the engraved numbers were coming out correctly, then it had a spat of data corruption, which looks like static, and everything shifted to the left. Here the shift was about 11mm. After the shift occurred it seems to have continued without further changes to the path, so only the first ruler looks incorrect; but in the interface you can see how far everything is shifted. 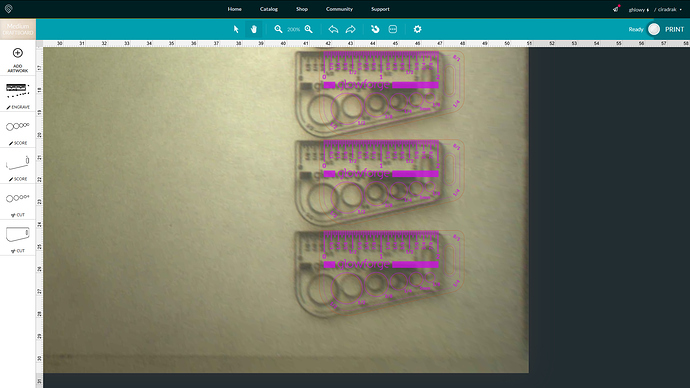 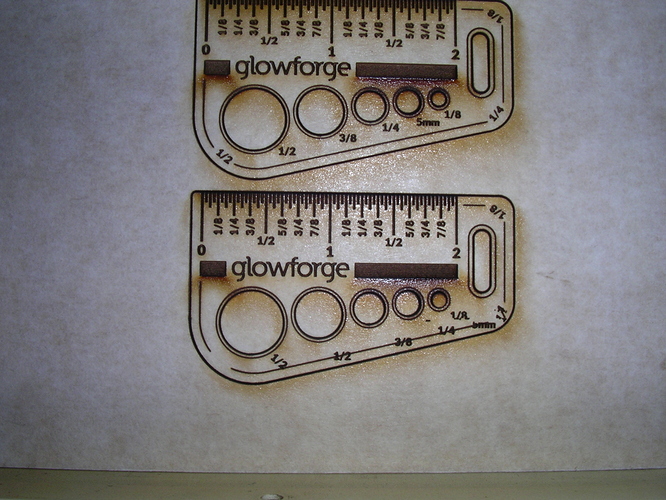 If you look really carefully, you can see that the first engraved fractions are in the correct location.

Have seen this happen on a few machines when the head is moving to the far right side and often the far right front. It usually ends up being a replacement solution. My first production unit did this. The unit was replaced though honestly I would have ignored it had I known a replacement was the solution. Only happened if I placed the design right on the edge of the design space.

It kind of makes sense. The S/W design placement limits are relative to your camera image. If you place the design all the way against the S/W limit and your machine happens to be one of those with an image error of say 1/2" in the corner then your head might try to move 1/2" further than it is intended. So it hits a hard stop when trying to operate.

I’m trying to back my designs away from that right edge even now.

What I don’t understand though is the first run that failed. It was engraving out to the right edge. It even did a few cuts over there, then it decided it would shift away and wasn’t going to go there any more. I did a number of successful runs previous to either of the failures. It changed suddenly.

Yeah, unfortunately I think @rpegg is on to something…there have been a few cases of machines that had intermittent skipping problems that had to be replaced. You’ll probably need to let support take a look at the logs for the machine to see what they think.

Sit tight until you hear from one of the staff. ((And good luck!))

I don’t have any answers, I just wanted to say that if everybody did this level of searching before asking questions, the world would be an amazing place. You are awesome!