just before the holiday weekend before the 4th, I had a lot of time to tinker and experiment with projects, as well as document those here on the forums. Unfortunately, by now life has caught back up and I haven’t had that kind of time so I’ve only been doing the random small projects here and there—still something coming out about everyday, but nothing earth shattering. Here’s a few of the projects, just to catch you up a little. 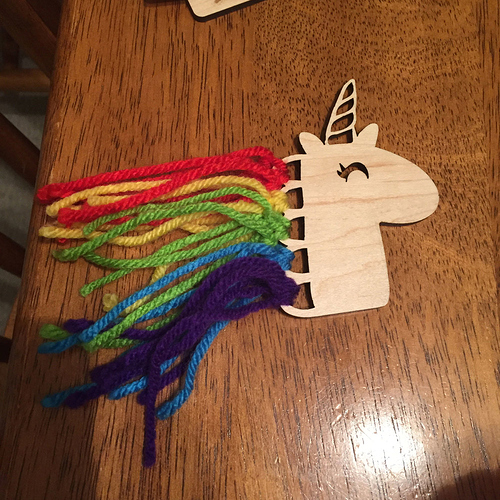 My daughter was begging for a unicorn (and one for her friend) so I quickly pulled up something I saw on pinterest for her (again, I can’t take credit for the artwork on this, and I don’t have the rights to use this, but as a free gift for my daughter and her friend? It was quick and easy). 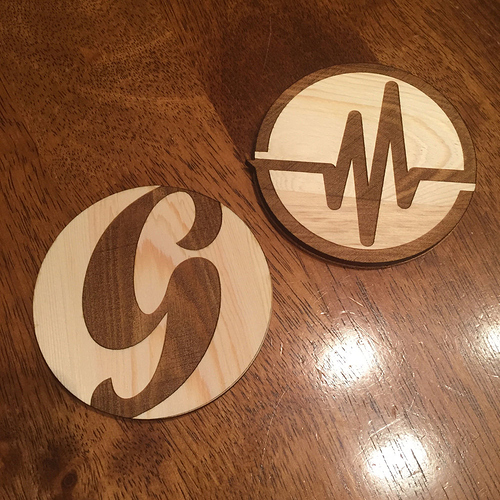 Also, made a couple more logo coasters (an extra for me since I made one for everyone else at the office—which they all seem to have loved by the way. One guy even told me his disappeared already because his college-age daughter saw it and stole it for herself she loved it so much—and one for a friend’s birthday of his business).

And, we moved into the realm of acrylic! That’s right, I literally spent the entire first week with my Glowforge only using maple plywood and hardwood. Wasn’t really sure what to do with the clear acrylic—I mean I have pinterest boards of all kinds of ideas, but without going into some big crazy project right off the bat I didn’t really know what to do with it. My son wanted a dragon and my daughter wanted a mermaid so I figured we’d just start with those. 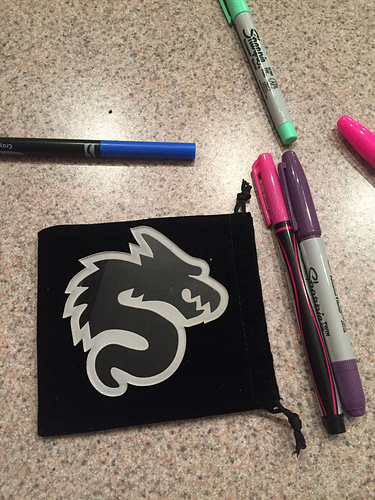 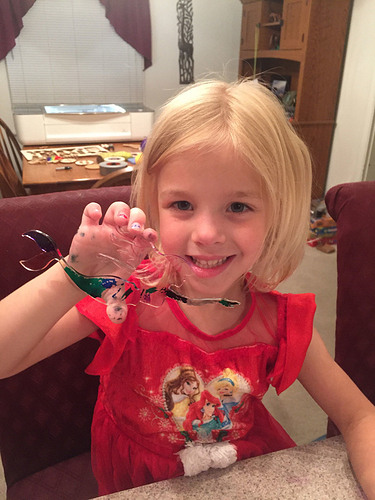 They turned out great—so crisp and clear! (that mermaid was the one causing me all of the problems I mentioned on the calibration issue post) My kids loved that they could color on them and change the designs anytime they wanted. We discovered that the crayola markers literally pool on the acrylic, so it’s easy to smudge all over your hands, clothes, and countertop. My wife suggested the kids user her fine-tip sharpies and it was much less messy, and it actually didn’t just wipe off or even come off with water. Luckily she had a magic eraser and it came right off (gonna have to invest in more of those I think).

My wife was quietly enjoying watching the kids during all of this, so after they went to bed I asked her what she wanted to make. She said, “Oh, I don’t know. I don’t need anything.” I told her that’s not what I asked and offered suggestions. She finally just said, “Why don’t you just go make me something. I don’t care what it is.” So after some digging around I thought I’d make her something she could put on a necklace. Even if she didn’t really like it, it would at least jumpstart some ideas for her figuring out other things I know she’d love to do. Here’s what I came up with: 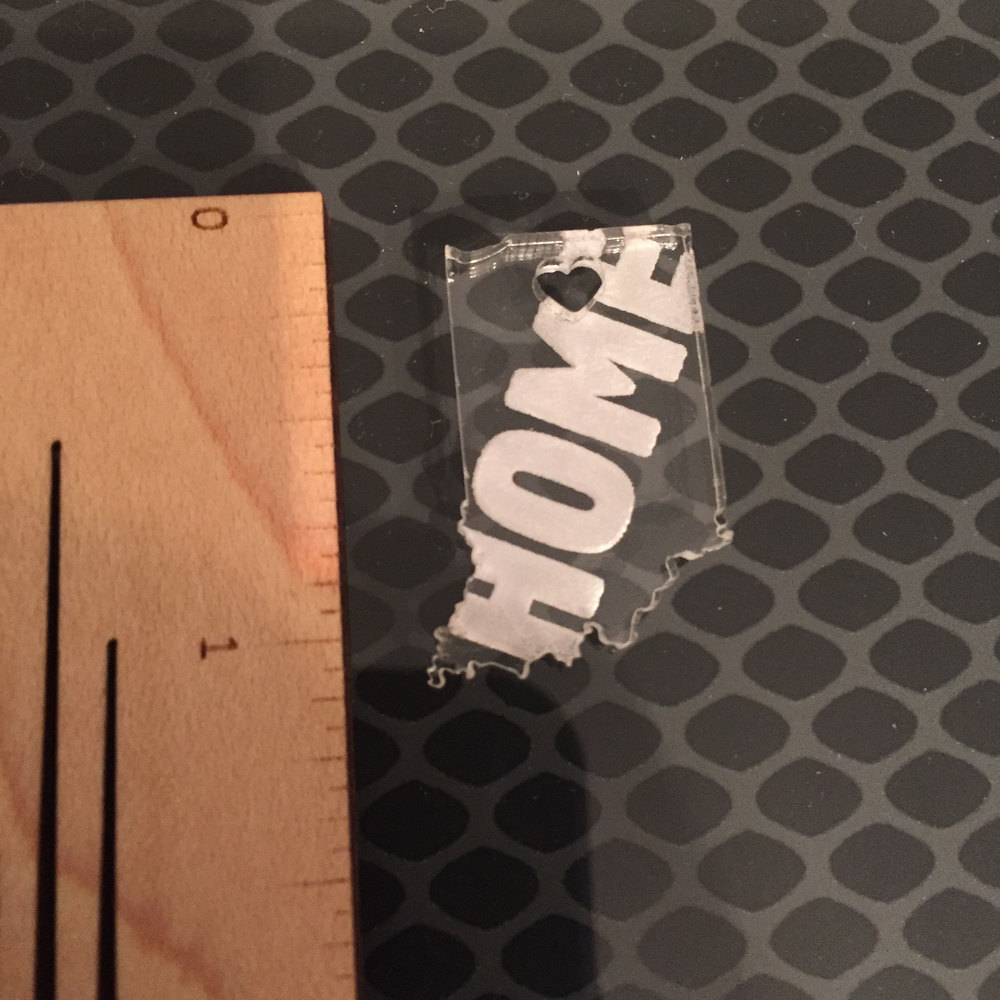 State of Indiana with a heart cut out around the city we live in up near the top (lucked out I didn’t have to cut another hole for the chain that way), and engraved the word Home. I also managed to remember to reverse the image before I cut it, so that the word home would read correctly through the back and keep the funky texture where it engraved away from the front. She actually really liked it, and of course immediately started suggesting other charms she wanted: “A heart shape with a crochet hook and yarn engraved into it!” “A stethiscope in the shape of a heart with baby footprints in it!” (she’s a labor & delivery nurse who loves to crochet).

Then, last night I was in the basement and my son came down with his tangled earbuds. I immediately thought, “Hmmm… I can fix this.” I had earbud holder designs pinned in pinterest that I have thought would be cool and would like to create my own adapted versions, but knowing my son wants to be an inventor someday thought he’d love seeing the process of seeing a problem and quickly generating a solution.

I set straight to work: open Illustrator, started drawing some shapes, took a couple of quick guesstimates on sizes of things (since I didn’t have any calipers yet—just bought a digital caliper today though!), and in a matter of a couple of minutes came up with a design which took less than a minute to print. 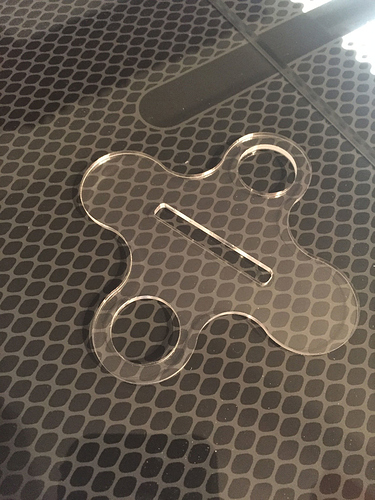 It turned out larger and bulkier than I imagined it, so as I showed him how to use it, I talked through ideas with him aloud for how we could improve the prototype by changing this or that in the design. He looked at me with wide eyes and said, “Daddy? You sound just like an inventor!” 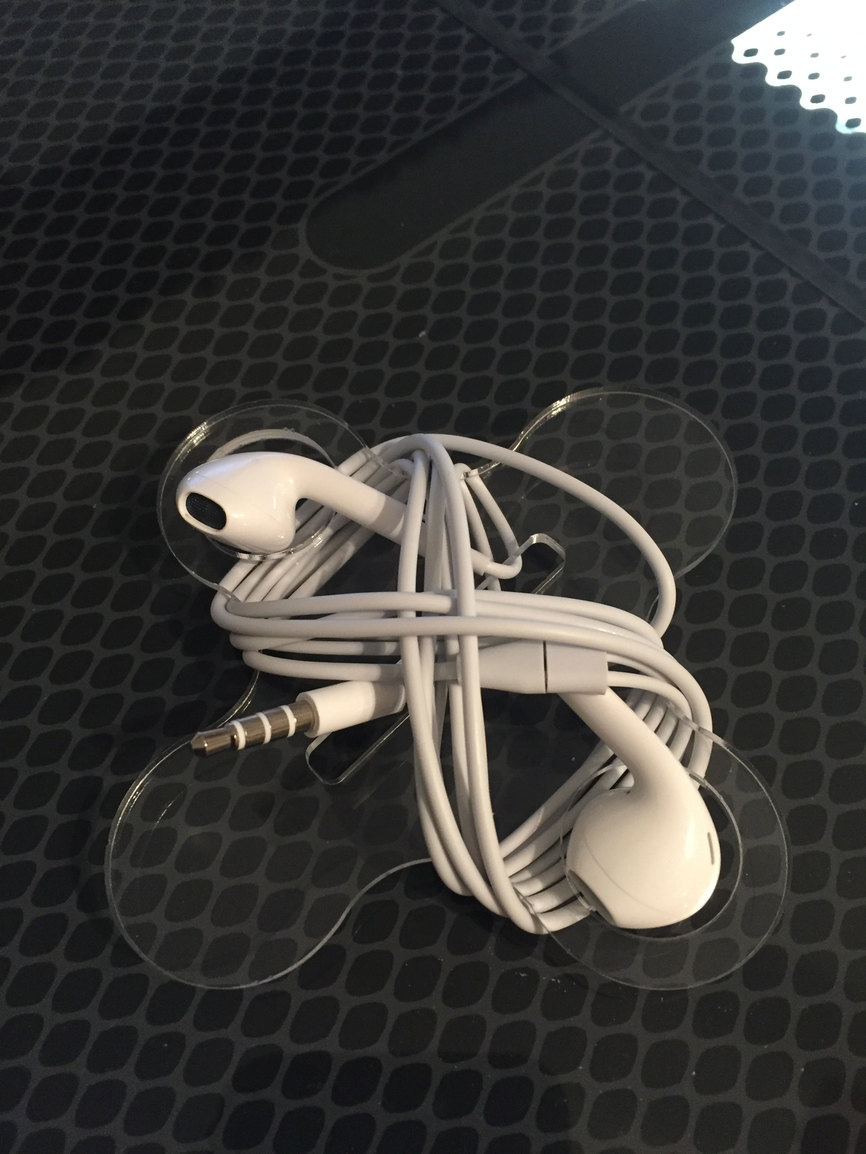 It was late and close to bedtime, but I’m kicking myself for not taking the extra time before I started it to ask him questions, draw some ideas with him, and let HIM create the initial design to figure out how to test/prototype an invention. Also, this one project really gave me good reason to figure out settings for cutting cardboard because that stuff is cheap and I could REALLY use that to test several different types of earbud holder designs (as someone on the forums so helpfully suggested to me on a previous post) and come up with as slick design to engrave into it so it’s much more appealing. 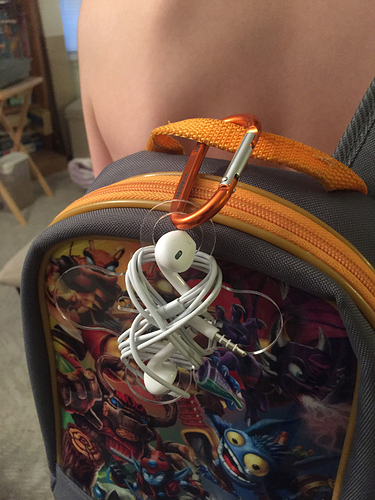 Guess I have a reason now to start testing cardboard for our second prototype, and let my son stretch his inventing muscles.

P.S. I still have that cello bridge engrave I did to share with you guys; just have a few finishing touches to put on it hopefully in the next few days, then I can show you the finished product.

This post was thrilling to me and I have a pru so I can imagine how it is to someone waiting. Good work.

i think cardboard is the secret that few are talking about for prototyping.

i don’t expect mine until sept/oct. but i started this week trolling at work for boxes and cardboard sheets. we get lots of big boxes, so i think i can even be picky. so my printer guy, my IT guys and gals, and my mail room guy are all on the lookout. plus alla my amazon boxes.

More cute projects and I love the bud wrap! Mine always fall out of the case into the handbag, and that’s the kiss of death for ear buds. Sticking it on the outside would be a lot smarter.

These are all really great! Good job, and good job including the kiddos. I think your son is really going to take off with this once you kind of stretch his inventor muscles, as you said. It will probably even surprise you what he will come up with. You will not have even thought about it.

Yeah, that was an after thought; the holes ended up bigger than I was hoping, but I realized a carabeaner would fit and he loved it… certainly not a good idea if it rains, but he liked it.

@bruceaulrich Oh, no kidding! I’m amazed all the time at the things he comes up with on minecraft or how he accomplishes things on Zelda: Breath of the Wild. I can’t wait to see what he comes up with!

This whole post is great, but this is my favorite part:

ask him questions, draw some ideas with him, and let HIM create the initial design to figure out how to test/prototype an invention.

I love that you want to engage your kids, and to teach them while you make cool things together!

I’m really loving seeing what you and your family are making!

The entire experience is terrific!

The earbud holder seems like a great use for trace - have him draw his design so he doesn’t need to learn illustrator.

but then let him learn how to create the same drawing in illustrator. great training. proper graphic design process has you sketch out your design first. do some refinements in sketch form, maybe a pen/ink mockup, then go to computer. in practice, i at best do a really rough sketch then go to creative cloud product, but i should really do more sketching.

Love love love the projects…the frost you got on the clear acrylic is beautiful…I assume it was a proofgrade setting?
Its great that your kids will grow up with the mindset of concept with the ability of creation at their fingertips. Definitely encourage that inventor spirit😄

That’s great! I wouldn’t worry so much about not talking to him first – a lot of times you have to have a physical prototype to crystallize ideas about something. (AKA “Plan to throw the first one away; you will anyway.”)

I love the unicorn

Wow, these are really nice. Clearly, you are passing on your creative skills to your kids. Keep up the great work.

By the way, are you thinking about coming up to the Detroit Maker Faire in a couple weeks?

True; for something like this I probably should’ve traced it to begin with (especially while we’re prototyping). Wouldn’t have come out quite as clean, but that would definitely go much quicker. To be honest, I keep forgetting I can trace stuff on this machine.

@smcgathyfay Yep, the “frost” effect was simply engraving the proofgrade acrylic. I flipped the image so it was technically engraving the back, and then it shows through the front side which remains perfectly flat and untouched.

@Just-Maken-It I honestly hadn’t even thought about it. Detroit, Chicago, & Indy are all about the same distance from where I’m at, and I’ve never really paid attention to any conference/convention type of things. Definitely interested now, for sure! I’m gonna have to look into it and start paying more attention to when stuff like that is close-by.

Yep, the “frost” effect was simply engraving the proofgrade acrylic.