I can’t figure out what’s going on, some pieces will have random lines running horizontal and then some move, this time it ruined one of my really nice pieces of exotic wood. I keep looking at the file for hidden things that I might be missing but I can’t find anything that would cause that in my file. Any thoughts? 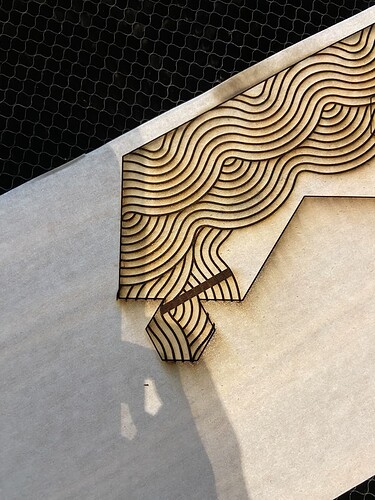 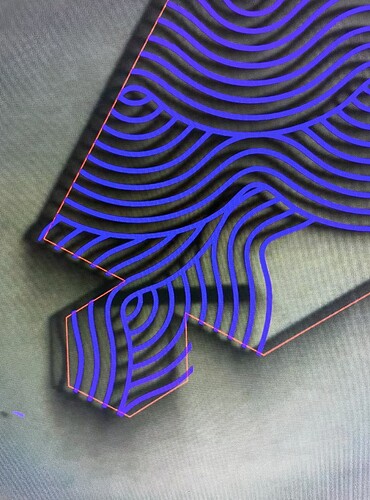 I think that is an unclosed path in your design. There is a gap between two nodes in the path so the GF sees that as an engrave path after processing.

What @ben1 said. For sure if you wave pattern is made up of vectors. It’s a maddening problem because sometimes it is hard to locate the twisted nodes causing the problem.

One of many encounters with this phenomenon:

What’s strange though is that it’s the same file, but the lines keep moving? or here is a picture of the first time they appeared (and they didn’t even appear on one of the cuts) and then another one appeared in a completely different place? To me it seemed like it was determined on where I placed it in the GF? I feel like I’ve checked the file so many times…it’s all a single object. Maybe you could take a look at my file? 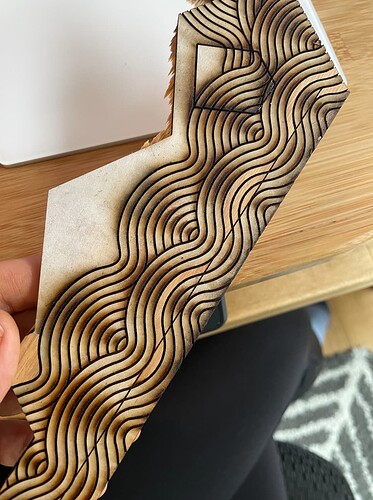 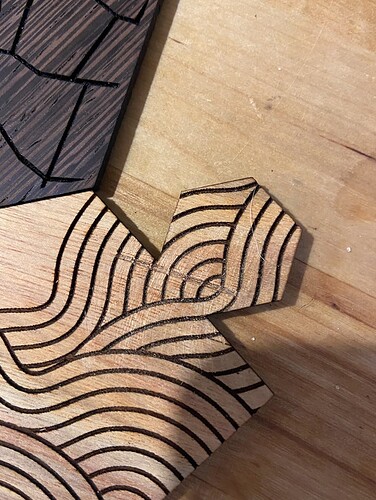 Here is a picture of the file in outline mode

The other thing that is driving me crazy is when I do a test run - I’ll drop the lines per inch down to make the cut go faster to ensure that I don’t see any random lines…and there are none.

Post the actual file and I’m sure someone will take a look. Also, if you rasterize the file you may eliminate the problem.

To me it seemed like it was determined on where I placed it in the GF?

That’s possible. Someone who knows the secrets of SVG program could explain it, but as you change the orientation of an SVG in the GFUI, that can affect how the vectors are interpreted.

One way to check this is view the file in outline mode. The node edit mode. Group select various areas of the troublesome spot and see what the handles on the nodes look like. 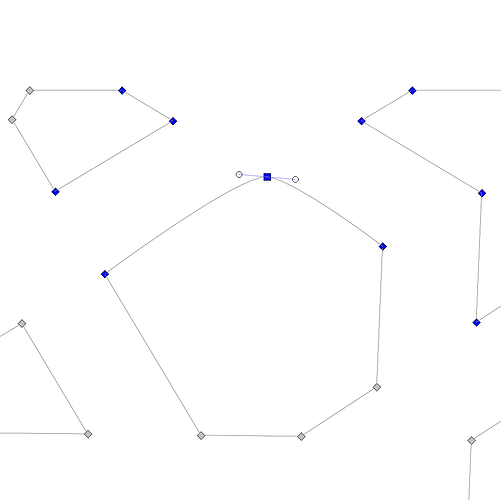 Thanks ya’ll all this has been super helpful to learn. Here is the original file I was working with if anyone can take a peak.
borders.pdf (4.1 MB)

Okay, I think it’s something slightly different going on with that file…there are White Filled shapes with no Stroke color aligned directly underneath the interior red cut lines. It’s not affecting your cuts, but it might affect your engraves, because overlapping one engrave over the top of a another one can cause strange cancelling effects to pop up, and they will connect the open edges in strange ways.

You can try just deleting the white centers of the cutouts. 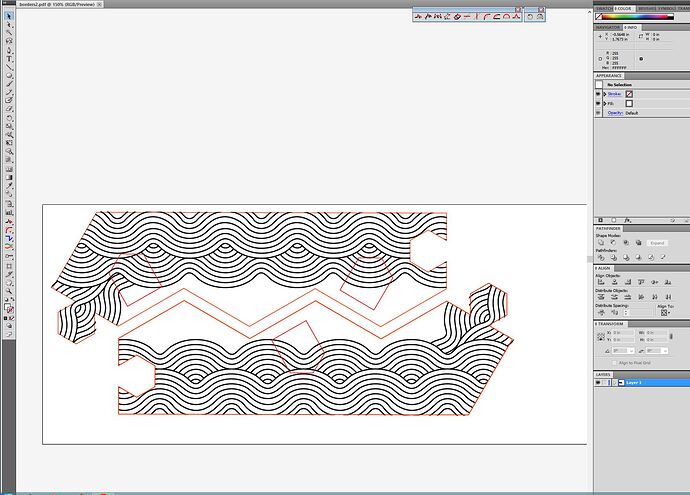 Hey Jules that is Illustrator right?

if so what do you select to make the “problems” show up?

I use inkscape mostly, but have access to Illustrator and photoshop, so being able to diagnose an odd problem like you just did would be a big help to be sure. But not knowing those programs well I’d likely never find the right command. LOL

I just ungrouped everything and then started shifting things around. (You can CTRL + Z to move them back if you don’t find anything.)

cool, thanks for the heads up.

there are White Filled shapes with no Stroke color aligned directly underneath the interior red cut lines.

Ah. Good catch. Forgot about that issue. Love the treasure hunts we do on this forum.

@Jules Thank you!!! So I downloaded your file and just tested it on some cardboard, it’s putting the random line in the bottom, I’ve checked the file and I just can’t figure it out. I did end up finding that there were unconnected cut lines doubled over the top of some? But I removed them. This is driving me insane haha 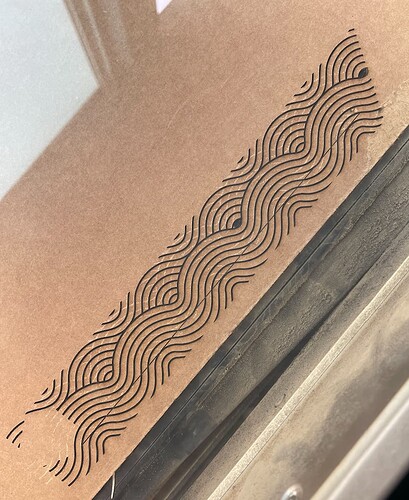 Whoops…my bad. I missed those doubled up cut lines and the Clipping Path as well. Those def need to come out.

You might just want to rasterize the engrave and overlay the cut lines…there might be an open point issue somewhere but I don’t have time to check it again this morning and try to find them…rasterizing it will be the quickest way to eliminate the issue and give you a stable engrave.

Our community is awesome!

Hi @lovesimpledesign - it looks like our community is really already on the right track as far as where this trouble is coming from. Ultimately, rasterizing the image is the best way to avoid the trouble you’re seeing right now.

Short of that, I’d recommend going with the suggestions given by folks here as well.

Please let me know if you have any questions.

I’ve had several pieces ruined because of lines like this. It happens randomly. I’ll have a few good runs, then the next run lines will appear, same file, zero unclosed paths. It’s frustrating.

yea that’s what I’m not understanding is that sometimes there are no lines at all! I’ve so far ruined about $45 of canary wood

@lovesimpledesign I can totally understand the frustration, hit and miss problems that like to make you play whack-a-mole with solutions can be really tiresome!

I’m glad to hear that you’re having success with rasterizing the design. While modifying the design file can also work, it tends to take more time, and can be more ‘fiddly’ (more hit and miss problems), so unless there’s any reason rasterizing isn’t an option, it’s definitely our recommendation.

@satchymoto I’d recommend giving this a try for your design as well. If that doesn’t work, please open a ticket/topic of your own and we can look into it further.

I’ll keep this topic open a bit longer in case there’s any further help needed, but it sounds like we’ve got a solution!