Continuing on my quest to teach myself how to tool leather and picking up from where my last practice session left off, I figured, why not do masks? While I still have a plague doctor mask pattern or three lying around in the “someday” project pile, I wanted something a little smaller, and I figured that this would make for a good warmup. I didn’t set out to do an RGB set but the PC enthusiast in me couldn’t resist the observation when I got to the end. 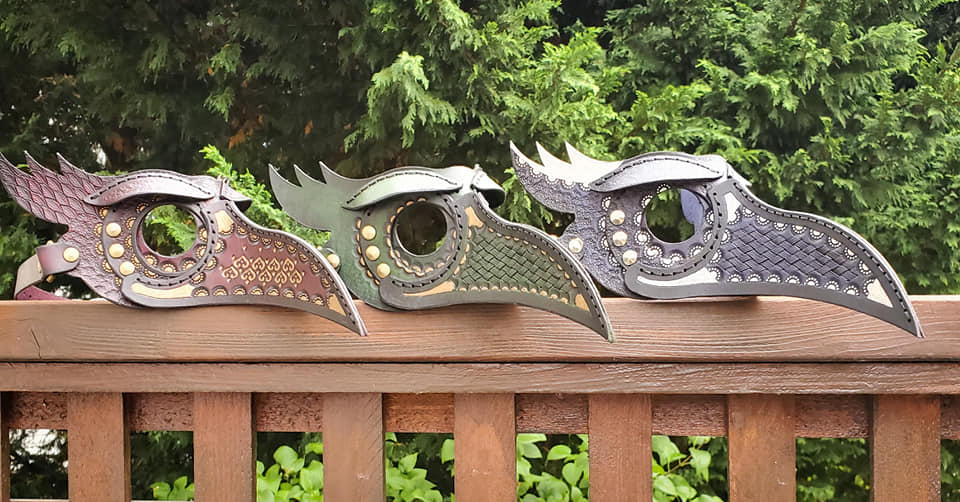 I actually did the green one first, and this was really a direct ‘next step’ from the bracelets I did. One thing I found really useful was to put the eyepieces in place on the mask to trace in a guideline for the stamping. No point in stamping where things are going to get covered up or won’t show, right? 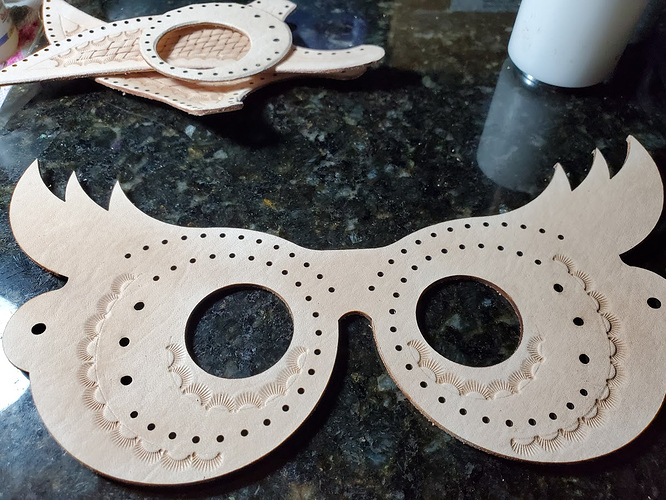 By the time the assembly is complete, those faint lines are covered anyway. I did realize after this one though that I went too far on the outer ring of stamps (they get covered by the beak) and I could have gone a little higher up near the brow.

the beak itself I sketched in with a pair of wing dividers… and struggled where the lines meet. Ultimately, by the time it was dyed, antiqued and painted, the result wasn’t bad - 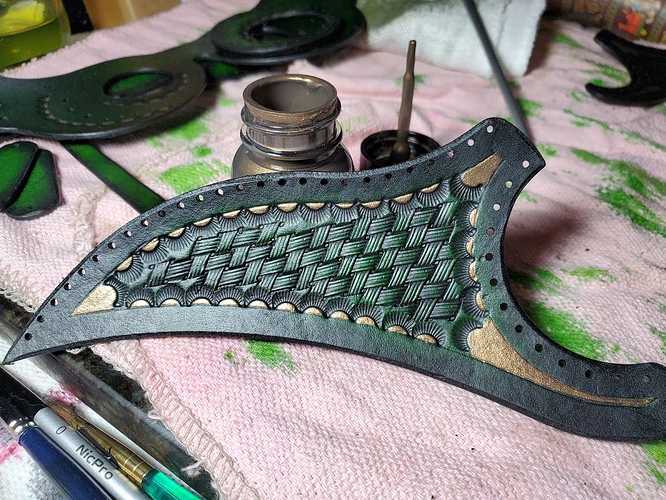 I also really struggled with the parts of the mask that aren’t the beak. The beak is easy, defined with crisp borders. The eyepieces and the brows are both tiny, and dropping in a border on the feathers of the mask felt… odd. So, gradient fade with dye it is. 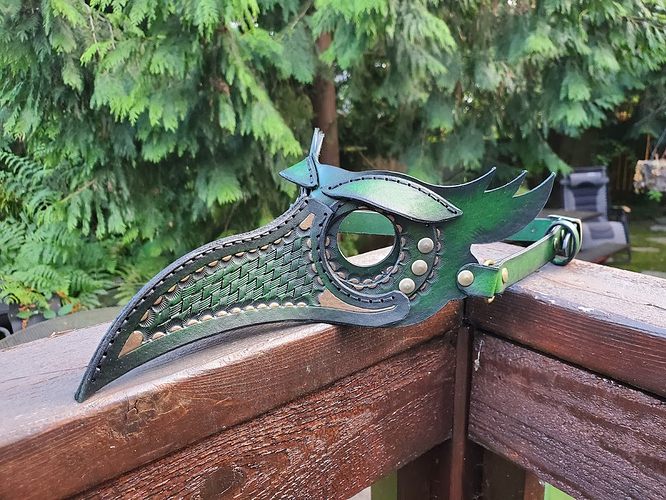 Not bad… but also feeling a little lacking. I wanted to push this a bit further. Fortunately, I had more stamps on the way, some of which were ‘mine’ and some that my wife, Shannon, picked out for her own projects.

So, round 2, with more texture, and a first attempt at bringing some more interest to the feathers at the top. 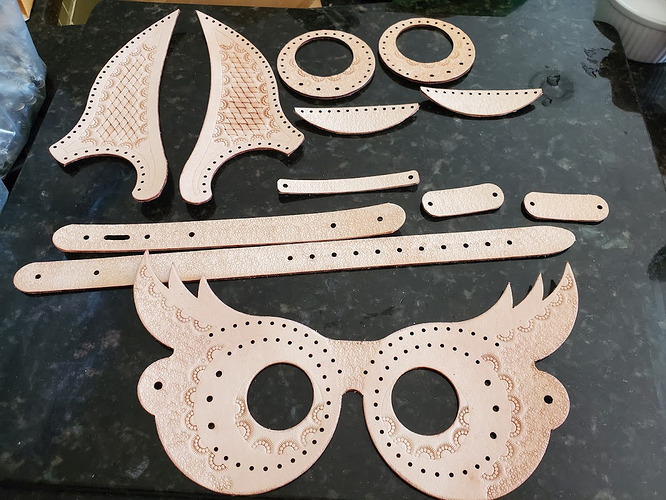 This time I took a backgrounding stamp (actually several of them, but it’s the same thing in 3 sizes) to basically every bit of this except a section of the feathers that I wanted to try accent painting. 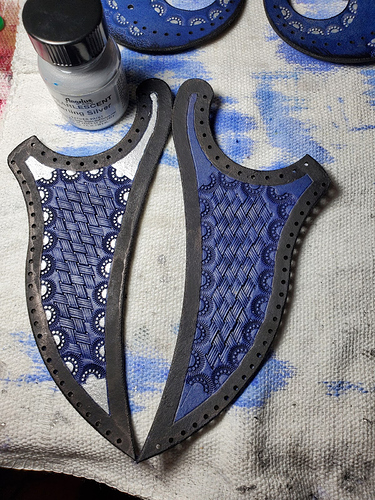 I did, however, find that some of Shannon’s nail art tools were great for painting a few hundred tiny dots… twice each. The end result was fairly striking though: 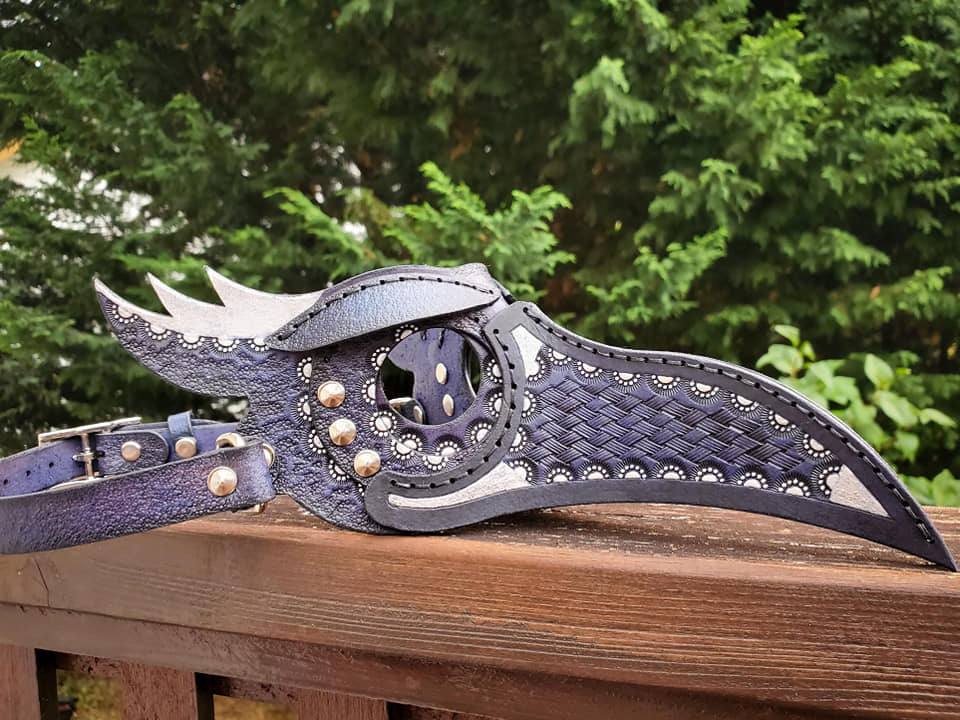 So, lots of things learned, and this one really shines in the details. 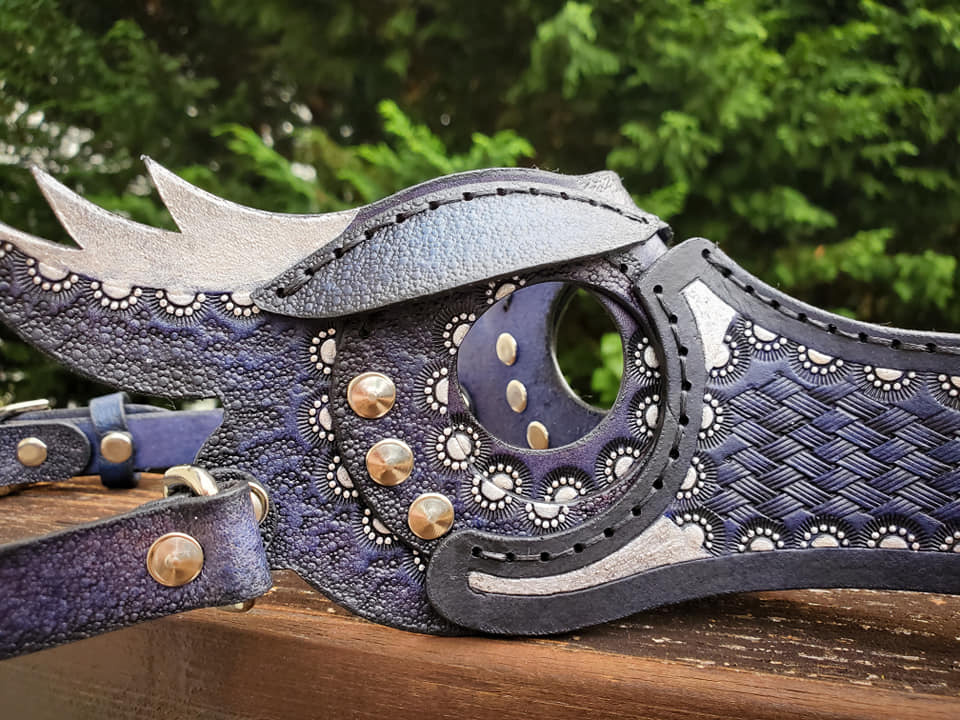 Still, the texture on the straps was a bit much and the silver accent on the feathers wasn’t quite what I had in mind. Good, but… artist me always asks “what could have been better?”

What followed was a bunch of testing and a lot of thinking about what to do differently in some very small areas. 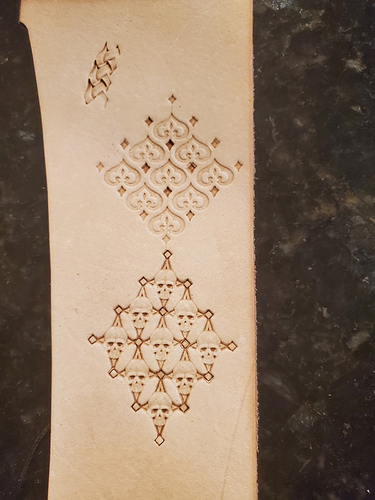 Neat patterns, but also very large stamps that take a lot of room… The braid stamp looked interesting though so I considered running it along the bottom edge of the beak. I traced the curve of the beak onto another piece of leather and tried curving the stamp around… 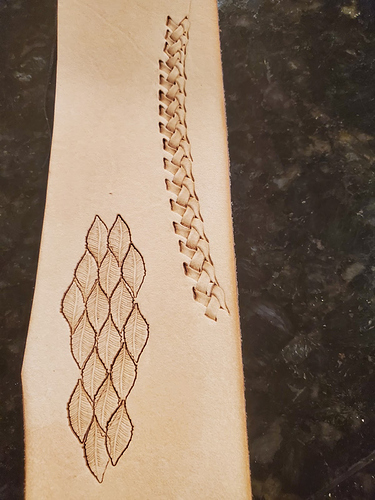 I wasn’t entirely happy with the result though. I also really wasn’t sure about the feather stamp that Shannon had picked out for one of her projects. Run it off the edge? Border it with something else?

In the end, I opted for some micro changes and improvements along with a few experiments… The eyepieces and brows got more defined borders in the same style as the beak… 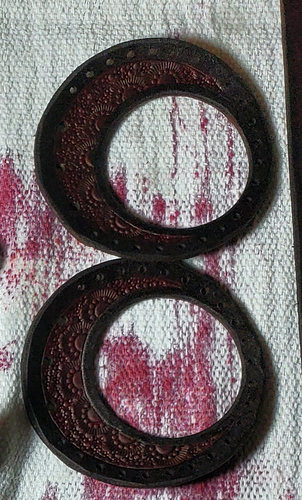 I left the straps untextured but kept a gradient for both the straps and the edges of the mask itself. I tortured myself with some detail painting… 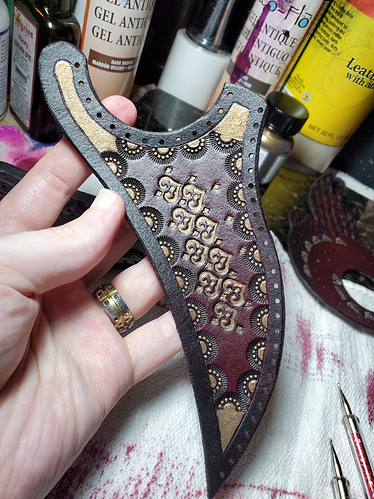 Those pointed metal bits in the bottom right of the image are what I actually used for the detail painting. I was struggling to be precise with a brush but a dab of paint on a tiny metal ball did wonders.

And this was the end result, which I’m calling one of the best things I can make right now: 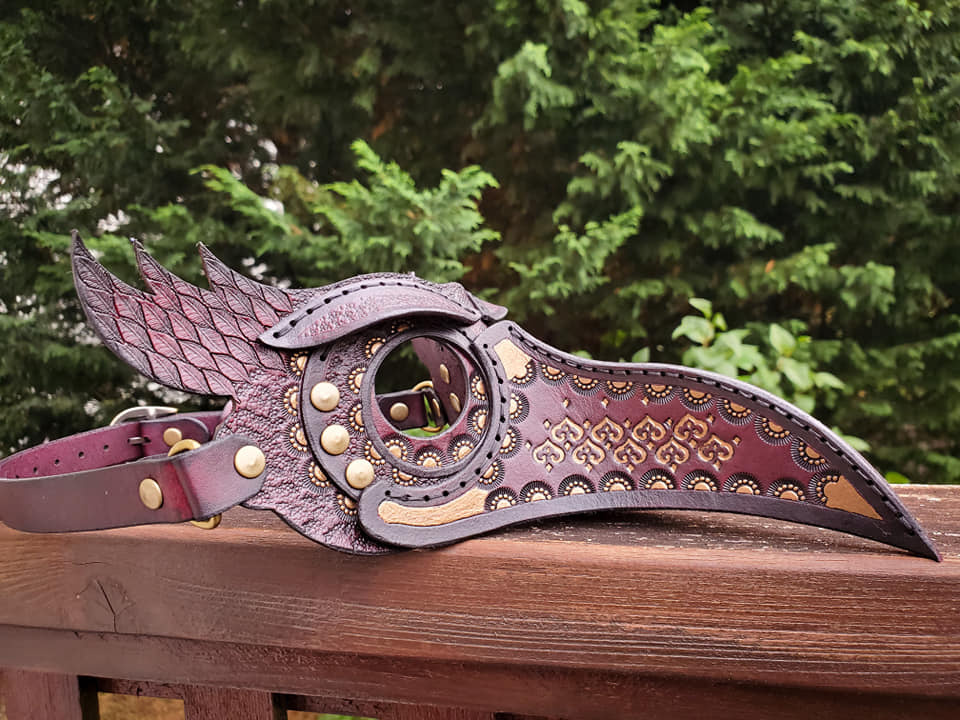 I ran the feather stamp right off the edge and honestly, I think that’s a better result than anything else I would have done with it. 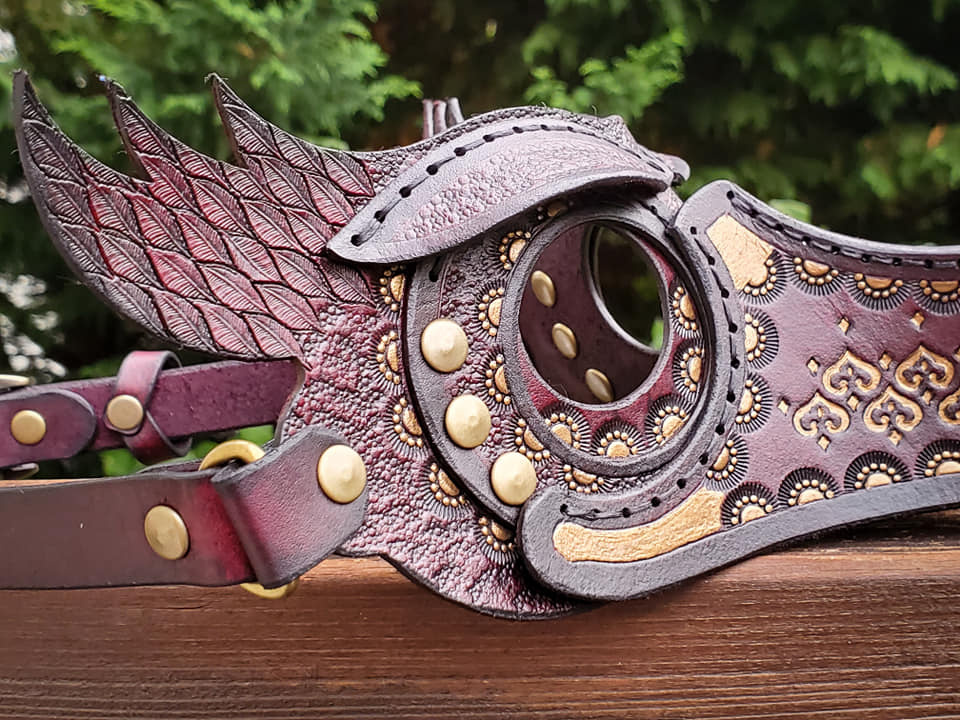 Now for the sad part… putting them in boxes and sending them lovingly to their new homes. One of these days I’m going to grab a project and pour my best work into it and say “I’m keeping this one!” but lately I seem to have stumbled into another crafter’s problem… my workspace is accumulating prototypes while the pretty things fly away from the nest!

Got a face-on shot?

I figured that this would make for a good warmup

Yeah… best to not be too ambitious…

I am in awe! I have no words to express, I will just keep staring at the photos…

I especially like the way that the green dye looks on your leather work. It seems to darken the stamping which looks great.

It seems to darken the stamping

That’s probably not the dye. After the dye, I use gel antique. Basically you smear it on, then wipe it off. The gel that collects in the deeper parts of the impressions doesn’t get wiped away, and it provides a dark contrast element to give an impression of greater depth.

Wow! Great work! The masks are both cool and kinda freaky. I say that in a positive way. They are beautifully done! I feel ya on the protocept pile up.

Your work is so beautiful. Always love reading about your process.

These are gorgeous. The patterns and painting/dying are impressive, but what is truly awesome is your write up. Thank you for helping us understand the process and procedures needed to achieve these results.

The details are exquisite. Just amazing. Thank you for the pics and write up.

That is some amazing precision work! Kudos on getting better and better with each version!

Exquisite. I, too would like to see them being modelled!

The details on the leather is fantastic!

You’ve really mastered the stamps, these look amazing! I’ve gotten stuck on Indiana Jones hats lately – not much call for tooling. I guess I could make fancy bands for them, and see if I can up my game a little that way.

Just wow. one of my goals is to do leather with BEAMER.

I feel so inadequate now.

Does everyone here already know that the plague doctor masks actually served a useful function? They stuffed the ends of the masks with herbs and essential oils designed to kill pathogens…generally the Thieves herbs.

Trivial Pursuit question, so it must be true.