Trying to understand how to interpret the “scan gap” conversation elsewhere and translate that to GF settings.

i’m working with some software scripts from the facebook group “that dude with a lazer,” (posted samples engraved on my universal a couple of months ago while my GF was in for repair). i’m trying to figure out how to interpret “scan gap” into the GFUI.

Sean, the script author, said, “scan gap is referred to as line interval, resolution etc in your laser software.” And i’m supposed to look at what the scan gap is and use that to determine what the DPI of the image should be. not matching those up will result in less optimal results with the script. 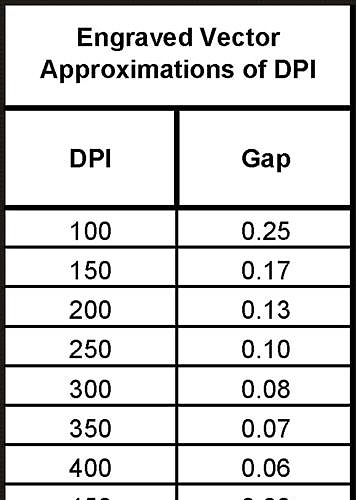 i just randomly set the LPI to 340 and engraved this one one a piece of BB last night, which was set at 300dpi. but i have no idea what DPI i really should be setting up the image at or LPI i should be engraving at without knowing what the scan gap is or how to interpret that in the GFUI. 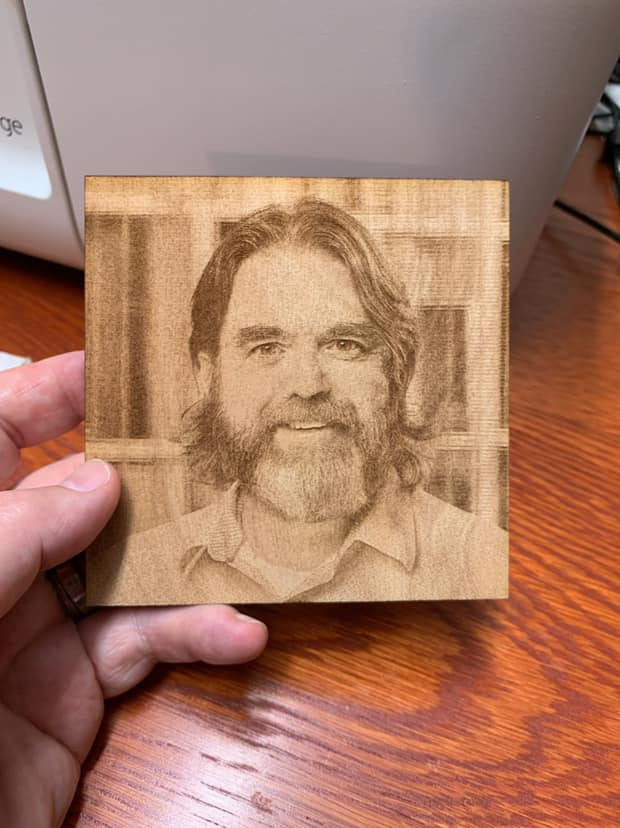 My understanding is that for ideal settings, the DPI of an image should be double the LPI used. I don’t understand what the scan gap is intended to show.

here’s a page that explains scan gap far better than i could (and i’m only pretty sure i get it). 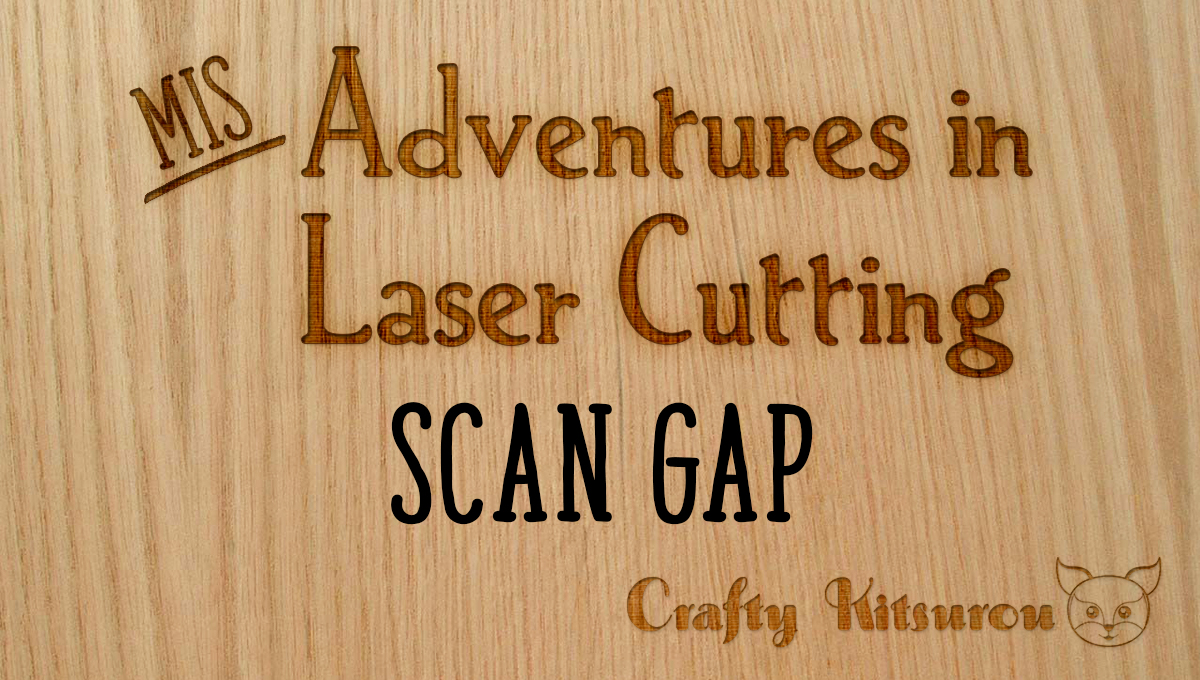 Come with me down the rabbit hole and see how the question “What does this setting do?” led to an epic quest with fantastical creatures, sword fights…wait, no, that was something else.…

If I understand that correctly, the scan gap determines the LPI.

yes. that’s my understanding, too.

the issue is i don’t know what the scan gap is on the GF or how to set it. or how to measure the LPI in equivalent of scan gap to determine the proper LPI to use these scripts at. they were built for non-GF machines that have scan gap settings.

I don’t have any “smallest” designs handy, but for reference, the beam is roughly 0.008" in diameter, and the laser can move with 0.001" accuracy.

I’m not sure that’s right.

Doesn’t the scan gap refer to the distance between the horizontal rows? And a tighter scan gap could result in some overlap depending on the width of the beam? I don’t think there is a single scan gap, it should be a configurable setting.

I’m not sure that’s right.

I’m not sure this is right either. I’m trying to make sense of it. The way I read it is that the scan gap is the distance between the middle of each horizontal row, not the edges.

And, I read it again, and I’m incorrect. It seems to the be the edges of the overlapped portion of the beam.

ok, a little chatting w/@jbmanning5 and some info he had, along with a memory from some sleuthing around earlier, and i went back to this page.

I’ve spent the past week creating a Chrome browser extension that allows users to save and modify custom materials for use in the Glowforge web interface. This project is not affiliated nor endorsed by Glowforge, Inc. USE AT YOUR OWN RISK! I have tested the extension on my home computers and it has not caused any issues with the Glowforge UI. I believe it is ready for testing and feedback in the wild. If worse comes to worse and the UI starts misbehaving, uninstalling or disabling the extens…

which got me to this table.

The extension does not currently use LPI as you are used to in the Glowforge UI, it leverages their internal definition of scan gap. Below is a chart that that defines the relationship between the two.

then, from there, i married the table above from a more traditional look at scan gap. there’s some overlap, and hopefully i can use this to do things comparably and try to marry recommendations from other laser cutters to how i’m engraving the scripted photos. 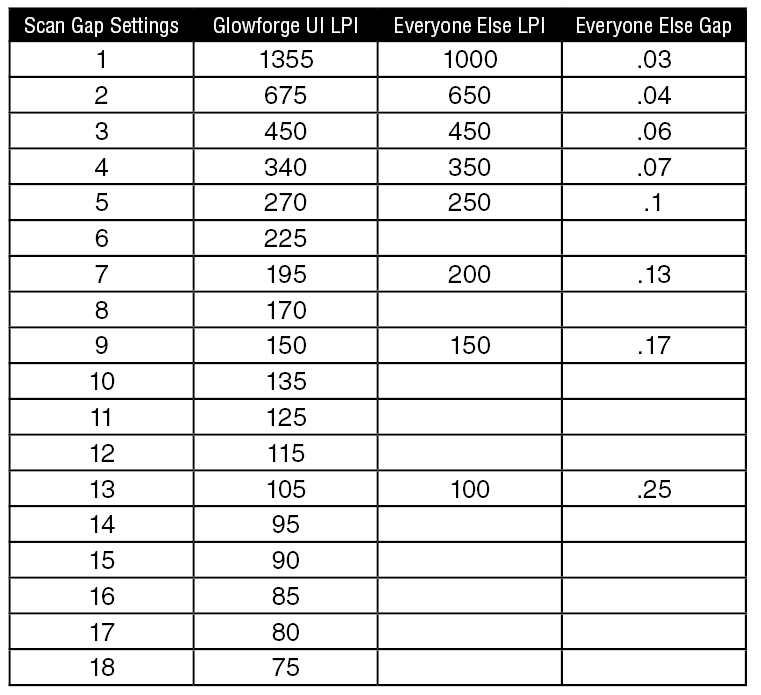 life might be easier if GF identified the scan gap on the same kind of scale that other laser cutters do, but the rest of the numbers aren’t really comparable either, so…

I don’t know that it would be entirely academic; ultimately, you can calculate out the optimal resolution to engrave a specific file at (or, the optimal resolution to save a file at). Somewhere in the processing, either the laser is going to be tossing data, or repeating (or interpolating) data to achieve the final engrave. If you know ahead of time the resolution that you want to engrave at, you can save your file so that the data loss or data interpolation is limited, which should give more accurate results.

the problem we sometimes have with the GF is when you talk with people using other ecosystems and they talk about their processes and there’s just no easy way to convert their settings to making something on the GF.

i’m running into this exact issue right now, which is why i went through this exercise and will do some more testing.

the “some dude with a lazer” scripts i mentioned seem to take a lot of guesswork out of converting a good photograph (so, like with everything else, GIGO) into an engraveable photograph.

for right now, i was able to use it a few times in paintshop pro before my free trial expired.

he’s in the process of writing them for photoshop. and THAT would make me very happy, since that’s my real happy place for image editing (and i wouldn’t have to buy something new). and some of the stuff he’s been engraving looks amazing. especially with paint on top of ceramic tile. 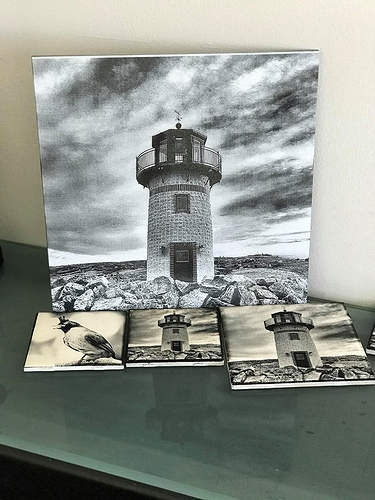 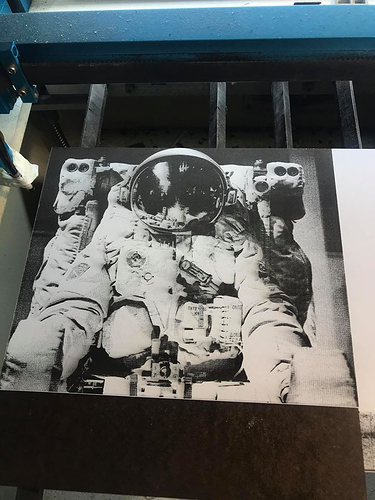 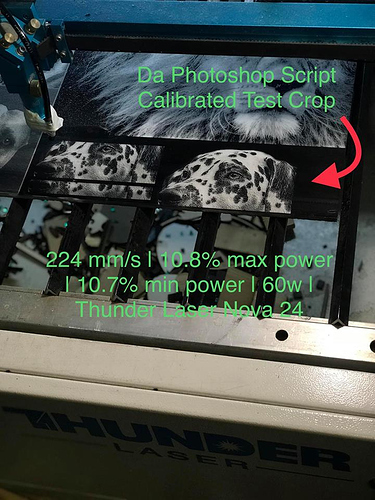 FYI, if anyone else is interested in the scripts, the original post has a link to his facebook group. from there, he has posted the paintshop pro scripts for free.

he’s been rewriting them and is going to put out some photoshop scripts, but those he will be charging for. he made the PSP ones for himself and shared them. enough people have clamored for them in photoshop that he recreated and tested, so that’s why he’s going to be charging. he said something like $15-20.

So the while LPI thing versus DPI, can be tough to wrap ones head around (like getting into DPI, PPI, etc.)… resolution is always difficult to convey in this regards, in my opinion. Technically, in commercial offset printing, you have LPI * 2 = DPI

But, if you just plug in the standard formula (1 / LPI) * 25.4, you actually get very close to what your chart above shows:

Actually, I hid some data in the first table. This one has if you converted out the LPI to DPI, and I also converted the LPI scangap data to inches, because that makes more sense to me (even though it’s not the standard)

Technically, in commercial offset printing, you have LPI * 2 = DPI

and just to make it worse, that is highly simplified. you’re really more interested in linescreen than LPI, which is slightly different, but not as simple since every press (or plate maker) has a different linescreen.

but thanks for building that table w/the standard formula.

it may be a few days until i get to play with this more (new dog arrives tomorrow, probably not spending much time in the upstairs office for her first few days). but once sean makes his PS scripts available and i have a little time, i’m going to start engraving more test photos.

Holy moley, @shop. You are amazing. Such great contributions to the good of the order.

life might be easier if GF identified the scan gap on the same kind of scale that other laser cutters do, but the rest of the numbers aren’t really comparable either, so…

This is how I feel when I set speed and power on my Glowforge.

LOL!
Can’t tell you how much material gets wasted playing trial and error on this thing. I’ve got a couple hundred worth of stuff I’m not even going to touch until I get snapmarks…

What does scan gap or trial and error of speed/power/LPI have to do with Snapmarks?