So, I’m trying to figure out the settings for creating a silk screen with mylar. The settings have changed, so I’m re-working it. So far, the best option seems to be:

This lets enough of the paint through to create the image, but it’s still a little blurry. Hoping someone here will help improve upon it. Also, the jpg image was set to 2 colors (black and white) but I guess when I saved it, it still creates jpg artifacts because the edges have artifacts in the engrave. I tried a bitmap, but couldn’t figure out how to do an ordered dither or to convert to dots. I use almost exclusively SVG files so I’m not totally familiar with these types of files in the laser.

Any help is greatly appreciated. I’ll upload photos once the next print is done.

Save as a .png if you are able…

I used a PNG that was black

These are the setting that worked best for me
Engrave Power 30
Engrave Speed 500
Engrave Resolution 75
convert to dots and set to 50, focus at material

It gives a very nice screen effect, I also made a frame from Medium acrylic that I taped the Mylar too, This kept it stretched tight and also got it up off the bed a bit.
this also helps as it keeps it up off your material you are printing so you can get a good amount of ink in the screen before pressing it down to the fabric. I am planning on doing a video tutorial, but it will be a few weeks before I can get to it.

I’ve moved this post to the Beyond the Manual category per forum guidelines regarding settings for non-Proofgrade materials.

There have been a few discussions.
Here is a tutorial, with updates further down in the conversation.
I’d trust the settings as described by @tom.
I haven’t run new tests.

No silk, no screen Made on a Glowforge

Continuing the discussion from Create silk screens on a laser cutter?: I have been planning to employ my Glowforge to make some silkscreen patterns. This tutorial was a fantastic springboard. [IMG_8082] I didn’t use the silkscreen frame. The entire supply list for a one-color design is paint, Mylar, tape, a squeegee, and something to paint. In this case, a t-shirt. Start with this Mylar: https://www.amazon.com/Grafix-Clear-Dura-Lar-20-Inch-12-Feet/dp/B0092MJ7J2 Design a t-shirt. For my o…

Unless I’m mistaken, those are the settings from before the update. That’s exactly the result I’m looking for and I’m going to try Tom’s suggested settings. I will report back.

Edit - I misread your post. I thought you were suggesting there were updated settings in the No silk, no screen post. Cutting my screen now.

sorry. I wanted to reply to this question:

I’d love to see this tutorial.

Though, I also misread your initial post. I thought you were presenting new settings. I didn’t read closely enough to see that you used the settings I originally recommended and were seeking an update.

I think this is the best it’s going to get for the present. I tried MANY variations. Almost every setting for 500/30 burned all the way through my mylar.

which produced the following result (the top one) 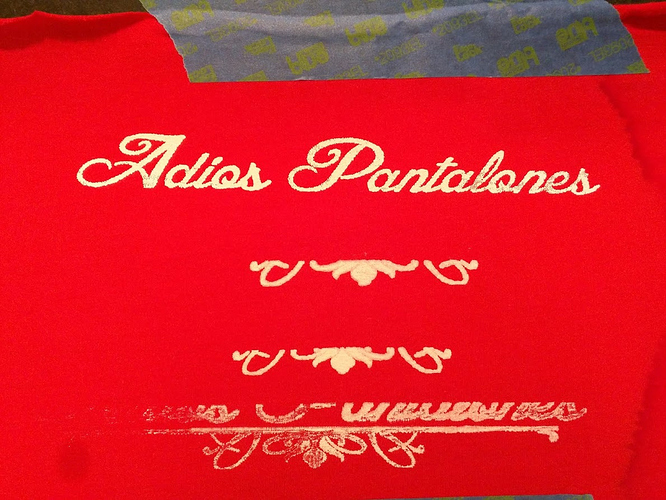 I used speedball fabric screen printing paint and a brayer. I did tape the material (jersey fabric) and taped the mylar on top of it. I attempted an oil based gamblin etching ink first but really couldn’t get it through the screen. I think if I added some tack reducer to it, it would work and the pigment load would be heavier and it might look a little better. Overall, not bad for a vintage faded look, but not really screen printing quality.

I did have a typography frame around the words, but it had a straight line (in the same direction as the dot matrix style engraving) and it just cut all the way through and then taping the mylar didn’t hold it, so I deleted it.

Thanks for the laugh

Hmmm, I had good luck with those, had the same mylar too, May have to try again. I did find my squeegeeing had a big effect on it, and I never got “silk screen” quality, but close

I’m a little confused here. So you’re converting to dots in the GFUI rather than doing a halftone in whatever design program you use? 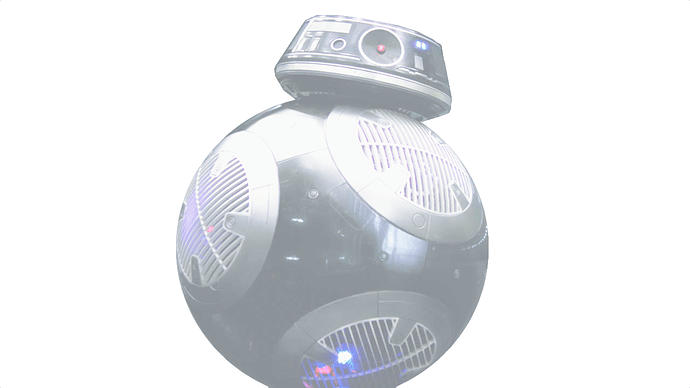 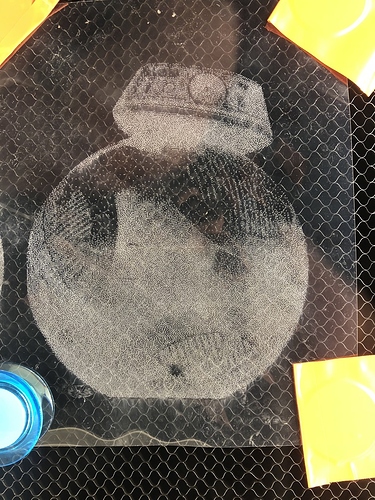 Doing the screen print: scotch tape the mylar onto a Haynes white kids t-shirt (purchased cheap in a multi-pack at Target) with a slice of clean cardboard inserted inside. Clamp with magnets front and back to reduce wiggling. Note that no frame was involved.

Then apply a nice bead of Speedball Screen Printing Dye to the top of the mylar, and using a plastic scraper as wide as the image, press firmly and slide down. 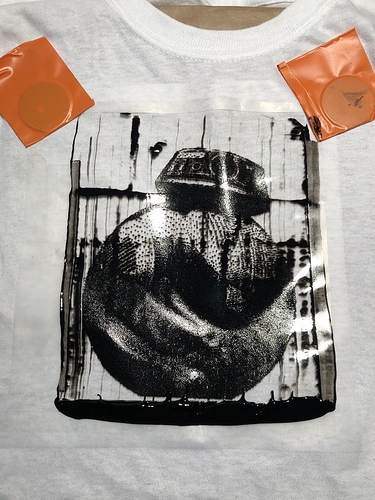 Looks great so far. Carefully remove the Mylar and chuck it in the sink for washing, and then blow dry the result for a few seconds before ironing it for 3 minutes on hot. 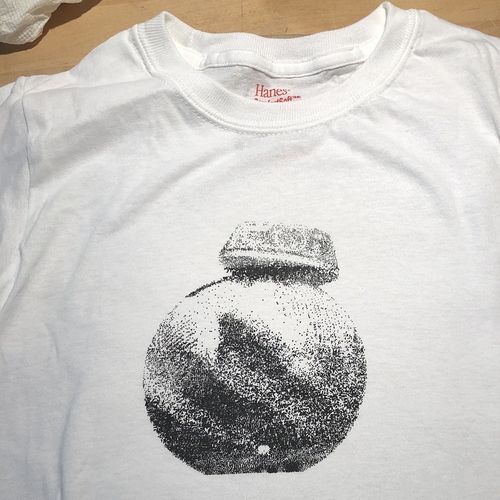 Conclusion:
Pros: A fun first screen-print, with even tone, good focus and plenty of detail. This was quick, clean and easy to do, and didn’t require specialised equipment.
Cons: unsatisfactory contrast. It’s clear that not all the dots let ink through : perhaps they are not large enough, or did not completely cut. Subject is only vaguely recognisable and identifying marks are poorly distinguished

Great job and writeup, I already have this thread bookmarked so i dont need to do it again

well done, I’ll be following along! were did you convert to dots?

Covert to dots is an option in manual engrave settings in the GFUI. There’s a great discussion of this further up this thread.

They sell a wax that is water soluble unless it has been changed by us light. By painting over it and leaving it in the sun for a bit everywhere that you did not paint would be insoluble and the rest would wash out. It was some years ago so I am a bit hazy on the details but we did put the resulting screens on women frames.

I would think it easier to make the frames with the Glowforge forge and use the wax and fabric for the design.

With a material that would absorb the uv, it would not be hard to transfer the design.

Side note - by silkscreening cobalt blue on to paper towels and then putting the towels on the curved porcelain we were able to put silkscreen designs on the thrown vessels. I only did it the one time for a class but it was an interesting thing to know. With a different life it would have been fun to pursue it further.

Generated a simple vector logo using Fusion 360 (but anything would do), added gradients and rasterised before sending to http://www.halftonepro.com. This produced a nice dot pattern in SVG.

I wanted to use vector all the way to the cut, but I have concluded that it’s too slow, and would probably end in a weeding nightmare. So Rasterised then sent to GFUI’s dot generator (clamped at 50%) 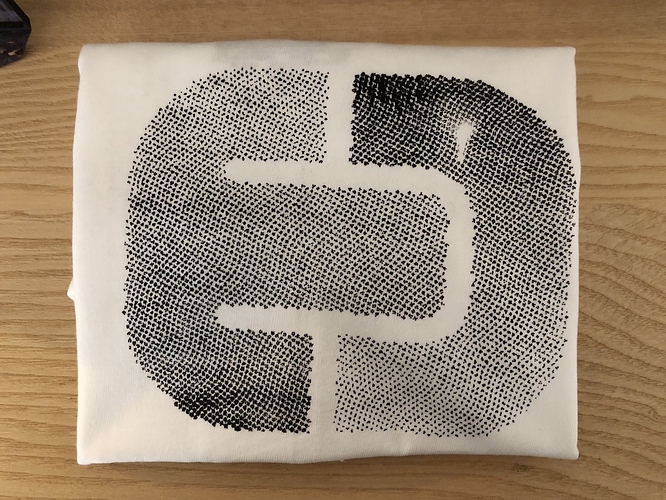 Speedball ink on a Haynes T-shirt again, let the kids operate the plastic scraper. Pretty nice output - upped the power a bit (to 30) and I think all the holes passed ink.

The original circular halftone dots are represented at a low level by a small number of dots generated by the GF dot generator. This makes the shapes irregular and non concave. I’m unsatisfied. I expect real silkscreening (using a waterproof light-sensitive agent on a fabric) has rather smaller holes. What is the densest non-continuous burn pattern I can achieve? preferably increase via horizontal modulation rather than additional scan lines?

The output is pretty noisy in terms of smooth tone gradients. This may be an inevitable result of a manual process of squeezing paint by hand on a pliable surface, or maybe I’m just using the wrong tools!

I expect real silkscreening (using a waterproof light-sensitive agent on a fabric) has rather smaller holes. 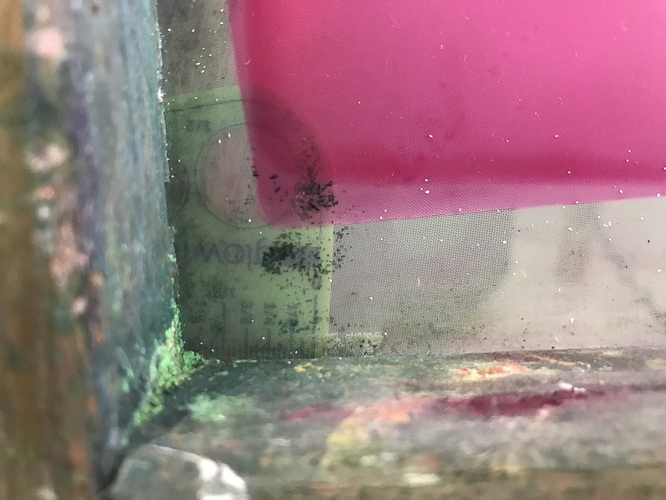