Hello, I apologize for my state of undress. I’m Slatbox. 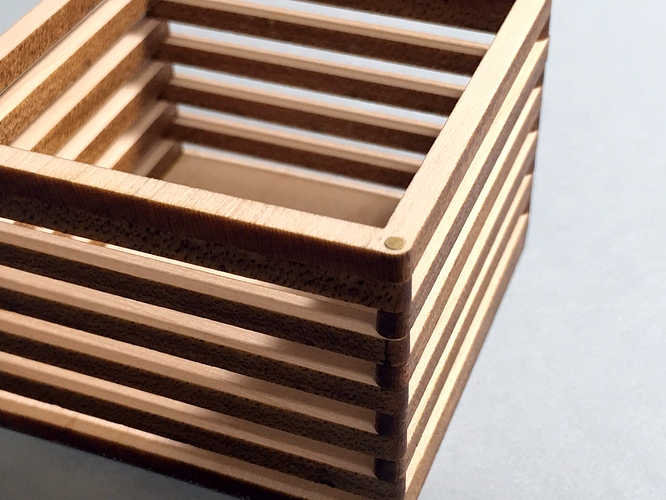 I started thinking about this idea recently, and this is a first prototype. Some notes.

The slats are cut to be 1/8" wide, with a 1/8" diameter round end. The end result is a pretty clean corner joint that feels natural.

You can see how the bottom slats are glued to the base, on opposite sides from the support slats on the top layer. It was an aesthetic choice, I suppose there’s no wrong way to do it, but I wanted it to be equally “slatty” on each side. You could theoretically cut hollows on the bottom piece to make it even slattier, but I didn’t go that far. 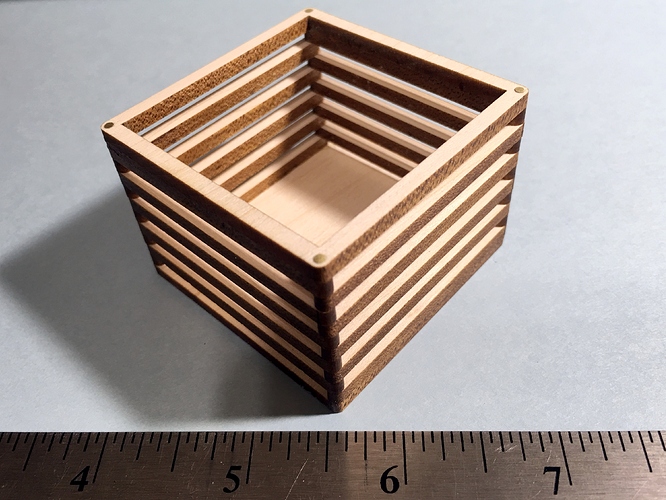 I decided to leave the edges of the slats “lasery”. I initially intended to sand the sides down and expose the bright maple, but in the end I liked the contrast so I went with it. Sometimes you choose the design, sometimes the design chooses you. That being said, I don’t like to oil/finish the lasered edges until the sticky residue has set – it can smear and make nasty discoloration. I will probably come back and oil this box in a few days. 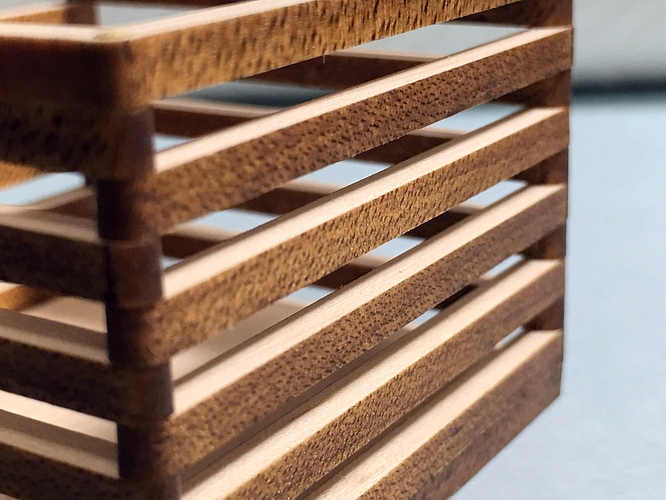 As for what kinds of applications there are for this, who knows. It’s kind of fun when you light it, so maybe it would make a good shade? 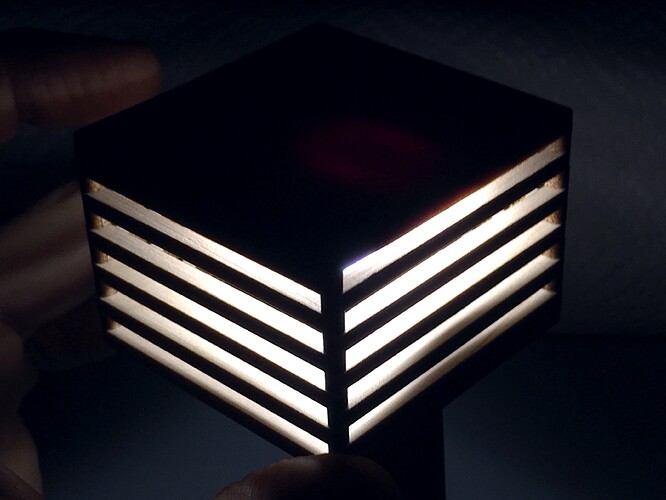 With proper short pins, you could also make woven surfaces, or use pieces to make a sort of negative space design. With various length links, it would be easy to make a dimensionality or surface texture to things here. If I were to do that I would look for fixed-length pins that you could just slot into place. As a proof of concept, I think it worked pretty nicely.

A quick bonus: scale of the slats. 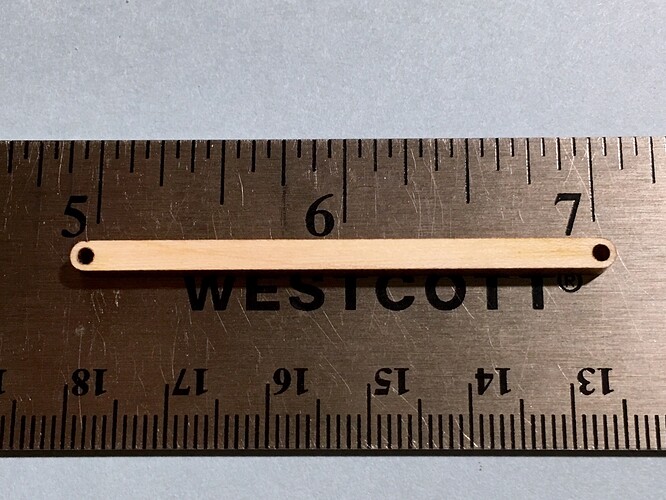 This is SO beautiful. I love the simplicity. 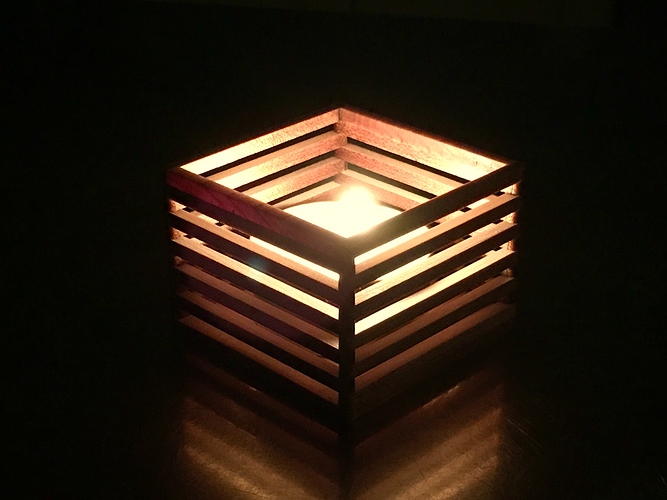 And there you go again making things that make me jealous.

As for what kinds of applications there are for this, who knows. It’s kind of fun when you light it, so maybe it would make a good shade?

And a tea light holder.

Without more examples, I’ll have to assume this is a slatistical aberration …

Looks like it would make a wonderful crate for miscellaneous goods, as well! I’m getting serious crate vibes from it. The scale is interesting, as I had thought this to be at least 3x as big as it is. Pretty great concept!

The scale is interesting, as I had thought this to be at least 3x as big as it is. Pretty great concept!

The idea would scale up so easily, just make your slats longer., or make more of them. You could triple the length but the pieces would get pretty flexible after some point. Alternately you could do three lengths pinned in a straight line and get a woven effect on your longer side. There really are lots of ways you could go with this.

And there you go again making things that make me jealous.

Thanks, but don’t be jealous! Steal it and improve on it! The beauty here is that this takes almost no skill, everything is lined up for you. The brass rods came from Michaels, inexpensive and easily sourced. (Even cheaper online).

Don’t like brass pins? Get copper or aluminum or even steel, Softer metals are easier to sand down (steel might be too much trouble). Don’t like metal? Use dowels. Want it to be 100% GF made? Cut pins.

Don’t like wood slats? This would be super cool in acrylic. Heck you could mix and match materials, different species of wood, different colors of acrylic, even a good stiff leather.

Straight sides? Literally for squares. Curve your links. Put sharp angles on them. Make them have inner cutouts. Engrave their surfaces. Paint them.

Locked in place is optional. Leave one side loose and now you have hinged slats. We have reinvented the hinge, we’re so clever! ;). Make your pin hole a slot, now you can slide the slats back and forth. Limitless.

This was only the proof of concept. I hope someone runs with it, it has a lot of potential.

And, a nice use of those little scraps of material that are really too narrow for just about anything else. A random mix of bits would make a pretty cool tea light or container. The design would make a cool pencil holder.

This one’s fun. Lot of possibilities.

I like it! It would make a great pencil, scissors, kitchen tools box. Graduate the lengths of the legs and make bowls or vases.

Really like the shape, the way the light passes through, and the building of it would be fun.

Yeah, had to stop off at the HW store this morning for some brass rod. (Dang it!)

I also used the brass rods in my finger joint experiments. There’s one with small brass inserts.

When I get my machine out of storage and running, I think I’ll use this technique to make hexagon or octagon shapes for some ideas I have. Of course, now that I’ve mentioned it I doubt I’ll be the first to try it.

I’m totally good with that.

I think I’ll use this technique to make hexagon or octagon shapes for some ideas I have. Of course, now that I’ve mentioned it I doubt I’ll be the first to try it.

So I think the cat was already out of the bag

Solution: put the brass pin in a drill chuck. Spinning the brass slowly made it much easier to slide the wood pieces on.

OMG where was this idea my whole life.

OMG where was this idea my whole life.

Where was it during the first three pins? I considered it early on but was like “naah, I got this”. When I finally tried it with the 4th, I was kicking myself.

Well you caught on faster than me. I’ve been using them for hinge pins for years and never thought to use a drill. I hammered things on with a rubber mallet, and as often as not BROKE what I was trying to attach.