I always see such cool designs that people make and was thinking about doing one of my own. Surprisingly enough didn’t see a template anywhere on here. SO I made one.

I figured others might want to make one at some point so this template is set up as a guide for the left, right (edge of gf and edge of glass), and bottom limits in relation to the button.

I do all my work in Corel Draw, been playing with it since CD4 so why learn another program when this works. Anyway one file is in CDR format and the other is SVG.

This is my very first upload so if it doesn’t show up please let me know.

I could open the svg, however the cdr is only accessible if you have CoreDraw 2020. I have 2019 so I am unable to confirm for you. btw - thanks for sharing that with the forum.

The only difference between the svg and the cdr I would think is the guidelines. I left them all in place in the cdr and not sure if they transfer when exporting to svg. I can add an additional CDR version for 2019 if you want or you can drag and drop the CDR into corel.

Thanks for checking out the files and commenting. Let me know if you need anything.

Thanks for the free design.

Corel has been playing the cannot load CDR game for a long time. I understand that newer versions may have items in that may not be available to lower editions, but it should at least give it a whack with a caveat, since the new and improved stuff may not have been used.
I have gone around on this a lot with them, but it boils down to a marketing annoyance plan to push an upgrade rather than wait for something in an upgrade that is useful to you.

So this is just helping to create other designs. 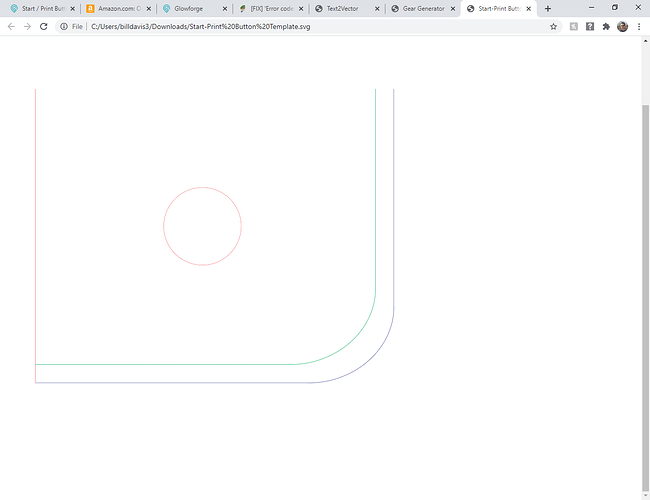 Thanks for getting all those measurements calculated.

No problem. Might be off just a bit due to the kerf for each laser but its darn close. My testing part was scrap 1/8” Birch.

I like spending time working on things that will make others easier and faster later on. Must be the old soldier in me.

If you like using corel, like i do, just let me know what version you need the file in and I’ll save it from v.2020 to the v. You need.

Awesome template! Thank you for putting this together. I have wanted to make something for my “do work” button, but have not taken the time to map out where the button is. Now I have one less reason to procrastinate.

The svg is fine for me. I rarely use the cdr files except when working on images that I do a lot of editing on. Thanks again for the share.

Awesome! Thanks for the file!

Ok. Ever need anything converted just send me a message.

Have fun with it.

Thank you. I may hit you up for some CD help sometime. I used to use it extensively back in the early days but later transitioned back to a Mac and it wasn’t available until last year. There is no Mac manual I can find for 2019. I’d love to upgrade, but my wife would kill me. Have you used the PowerTrace feature? Is it as great as Corel claims?

I may hit you up for some CD help sometime.

There are several of us on here that use Corel. Just toss questions out and one of us will get you the answer you need

Thank you I appreciate that. I see so much about Inkscape and Illustrator but hardly anything about CorelDraw. At one time it was the goto for graphic design

At one time it was the goto for graphic design

Now it’s a DVD or a download. I haven’t upgraded to the new subscription version though. It already does more than I know how to use or need and Inkscape and Affinity are waiting in the wings if I’m ever forced into a subscription model with Corel.

I have the non-subscription 2019 version. It tends to crash a bit though. I am planning on upgrading my iPad to the new iPad Pro and pen and getting Affinity. That way I can use it as a graphics tablet and an iPad.

the new iPad Pro and pen

Just gave my oldest son one of those for his birthday - he got it today. The specs are pretty awesome on it. I thought the new floating stand/keyboard combo was pretty cool but wasn’t something he’d use.

I was surprised how hard it was to find. Apple only had 2 within 150 miles of me (otherwise it wouldn’t ship until the end of the month). Amazon was the only place I could find one available now and they only had the 512GB version (in gray). The price even went up $60 since I ordered it last week. Crazy!

I use the ipad Mini 5 for my drone controller and it’s got the A12 processor (& M12 co-processor). The ipad Pro has the A12Z (with the M12). I have to think that’s a step up in terms of performance but I’m not sure to what extent.

Was a little off for me i had to change measurements and recut couple times to get mine dead on (im new by the way lol) but it got me pretty dang close, thanks!