I printed some text and it doesn’t look great came out pixelated. Here’s what I did, any one know what I may have done wrong?

set up new illustrator file.
entered text.
resized text to the size I want it printed.
create outlines.
rasterize.
save as pdf.
upload to UI
set focus, place text where I want it (did not resize)
print 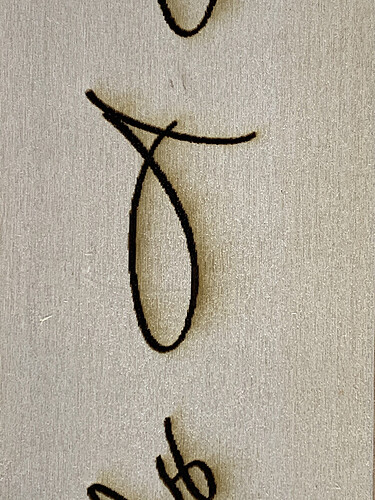 Is it only doing this with text created in Illustrator?

While there could be mechanical issues or dirty rails or crude in the belts, what is the font? It may not be happy about having been resized or just may not be a smooth looking font to begin with.

Did you rotate any on the printing layout area?

Edit: literal resize(bigger or smaller) or did you change the actual font size?

Yea i only work in illustrator. And I changed the font size before rasterizing

You don’t need to rasterize. Out of curiosity, what resolution did you rasterize it to?

For text, you just need to expand and then use pathfinder unite. That will keep it as a vector.

If you are going to rasterize the text, I would recommend doing it at 600ppi.

300 is roughly like laser printer resolution and is generally not “pixelated” to most eyes. The second part of the equation is what LPI did you choose in the GF UI?

You can save your rasters at 600 dpi, but if you choose 170 LPI it’s going to be quite visibly “pixelated”. (Really, kind of “stepped”, but you get the idea.)

Be aware that your PDF settings can change the resolution of the final image. Click the Compression item in the Save Adobe PDF dialog and verify that your images aren’t being downsampled to a lower resolution.

The settings below will be pixellated. Either select “Do not downsample”, or increase the ppi to 300 or 600. 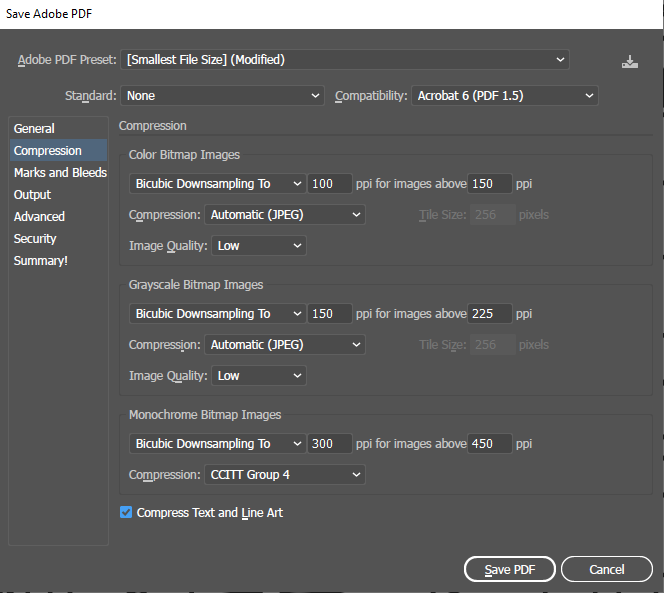 e second part of the equation is what LPI did you choose in the GF UI?

Yeah 225 is pretty good, but sharp eyes can pick that up at close range.

I fooled with finding some of the limits ages ago:

It may not be directly apples to apple for you, but it can show you some differences.

The biggest case where LPI matters is when you have something small that’s meant to be held, with an especially crisp engraving surface. Anodized aluminum is notorious for that, I was making some dog tags, higher LPIs were noticeably cleaner.

EDIT: Ah, I thought I maybe wrote that up, and sure did:

Aluminum dog tags Beyond the Manual

One quick note: I’ve since worked on settings a bit, lpi seems to matter a lot more than I would have thought. I was doing 340 but have since upped it to 600+ and the result is much better. Aluminum engraves so crisply that it was easy to see the lines at 340, 600+ gives a much smoother edge. I fooled with doing 340 engraving but then running a score of the same path to define the edges and got great results, but my specific path here had a few issues with open nodes and it was not cool. If I…

OK one last thing, there’s a point at which chasing LPI is kind of a waste of your time. There’s a maximum DPI that can be detected at different viewing distances. If you’re making something that will hang on a wall, then it’s a totally different LPI need compared to something meant to be held in your hand like a keychain.

There are lots of different guides for these DPI to distance charts, but they’re all in similar ballparks on the numbers. Here’s one:

there’s a point at which chasing LPI is kind of a waste of your time.

Definitely. This is kind of akin to running testing matrixes — there are so many variables that a person could go forever just testing things. And one of those things where the “art” of it, and knowing your craft comes into play: a billboard guy isn’t going to be looking for gigapixel images to print a photo for his billboard.

Most stuff is meant to be at least a half arms distance for viewing. Once you bust out the microscope, you’ll never be happy.

One little trick to this though is making a stroked copy of your text and running a separate score after the engrave. That will clean up (hide) those little steps.