The Hopeful Makings of a Scroll Saw, on a Glowforge

Soooo, some of you may remember my laughable first attempt at making a scroll saw by hand with a jig saw (LOLOL!) I learned a great deal of respect for scroll saw artists last night - Update on 8/17/16

Wound up with this: 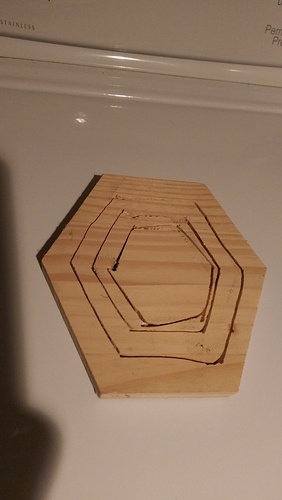 And then I decided to try it with MUCH more precision, using a manual mill…which literally took me hours of tedious, hard work, and it still looked like crap, and it was destroyed in 1.5 seconds when I tried to resaw it into a thinner piece…

Well, what took me hours to manually turn into junk, takes the Glowforge LESS THAN FIVE MINUTES(!!) to turn out…PERFECTLY.

Now, even an unskilled layman such as myself can probably turn out perfect bowls in less time than it takes a master craftsman to stencil out their cuts! Well, maybe I’m getting too confident, but probably not far from the truth

This is 1/4 inch Home Depot birch plywood…cut like BUTTER, by the mighty forge: 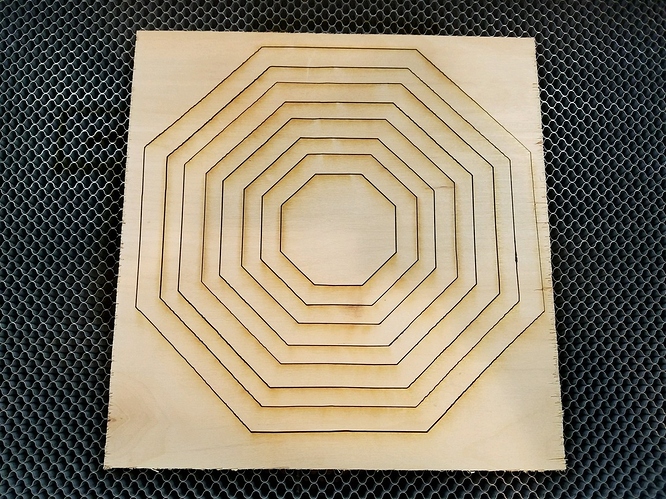 Let me back up, though, and give some more info…

I had made this in MSPaint (cause silly me des not yet know Fusion nor Ink; please go easy on me, lol), and had the forge scan it… 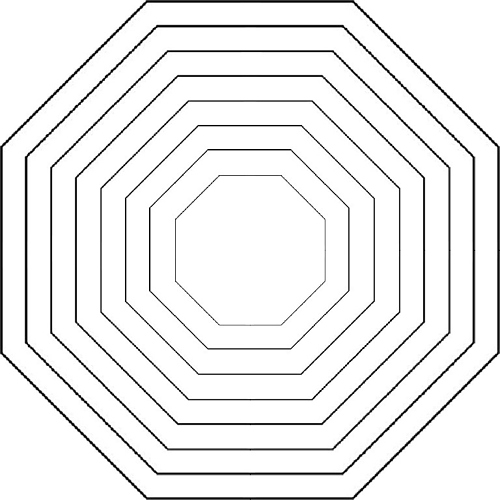 On my first attempt, I chose to cut “Outside the lines”?, which produced a double cut (same as in the video with Adam Savage when it cut his hand drawn design, and it produced a thin frame): 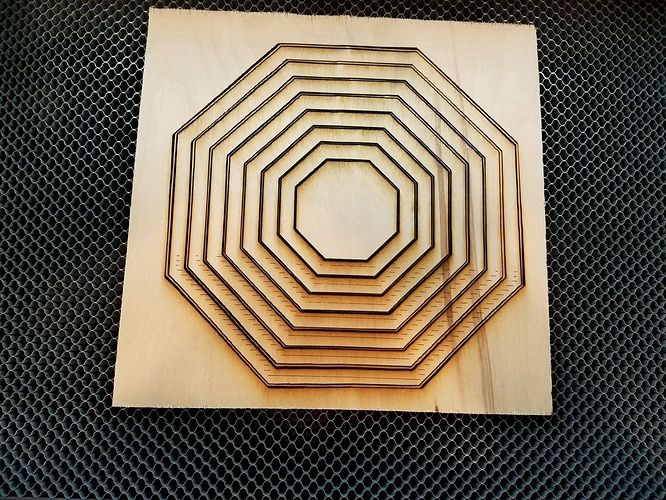 The very thin lines and dashes that you see are when I tried to do a second function; engrave a line down the center of each piece so that I could inlay a strip of metal later, but I think I set the power too low & the speed too high…weird that it started to come out like that, and so I cancelled it…I got it working better later.

Here’s a closer pic of the cuts and the weird engraving attempt. Please keep in mind that the only reason the cuts are not perfectly “straightedge straight” is because of how MS Paint draws lines; I’m sure I would have gotten perfectly straight lines if I had drawn them by hand with a ruler, or used a real program like Fusion or Ink: 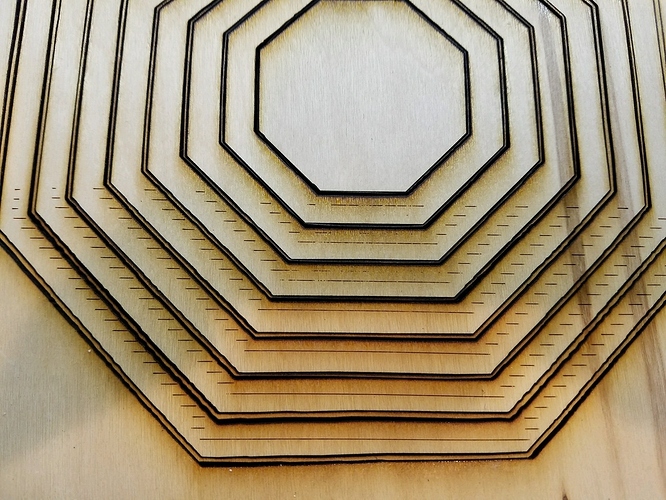 Here is a pic of the thin in between cuts…I definitely used too much power / too slow speed: 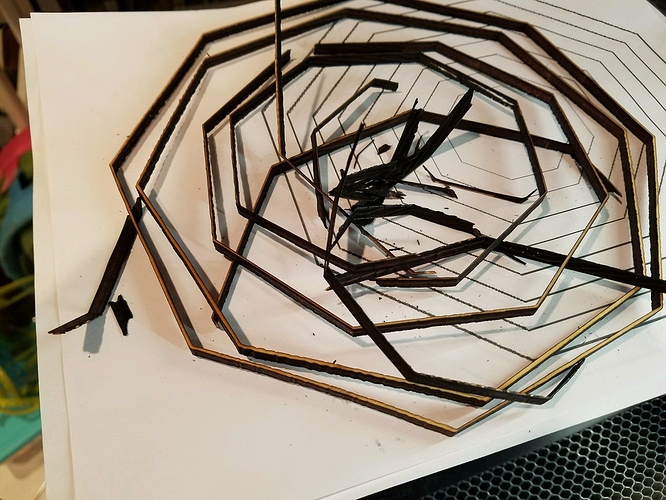 Here is the first attempt, loosely assembled. Notice how the extra pieces that were cut away in between each cut makes for a bowl with much more “open air space”: 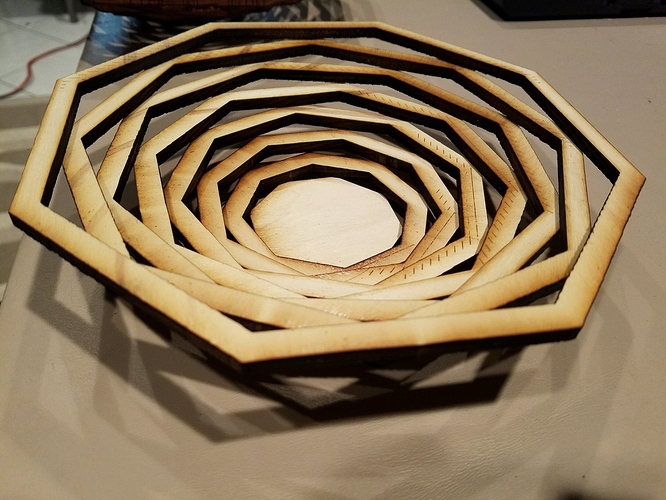 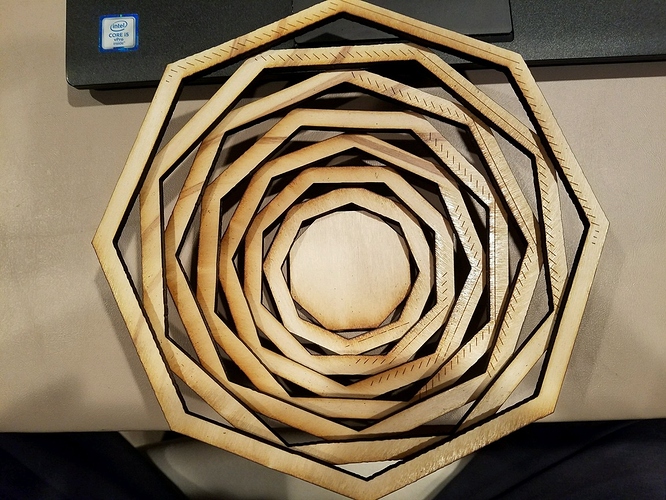 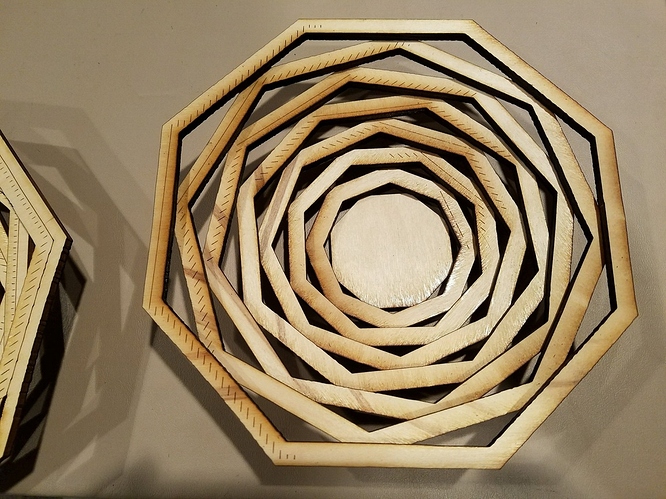 For the second attempt, I changed a couple of things: 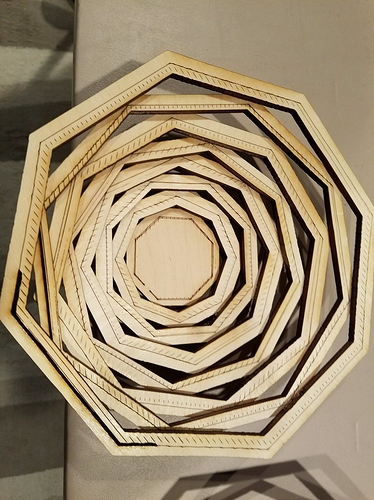 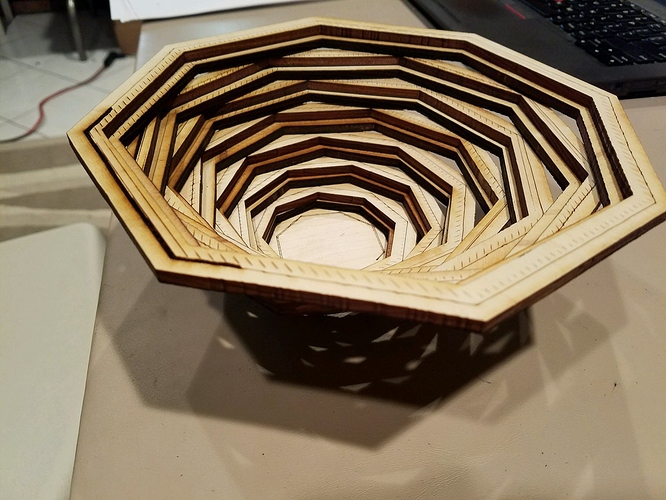 Notice the 2nd type of engraving…this is what I wanted to begin with. I cancelled it after a bit, though, as this was just a test run, and it would have taken a long time to finish 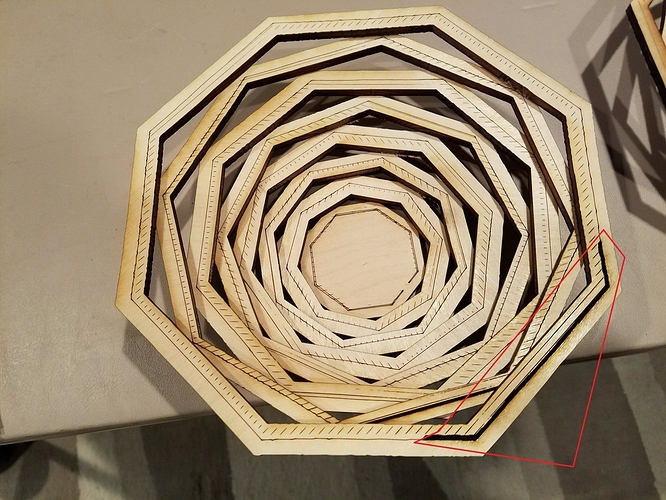 Here they are side by side for comparison: 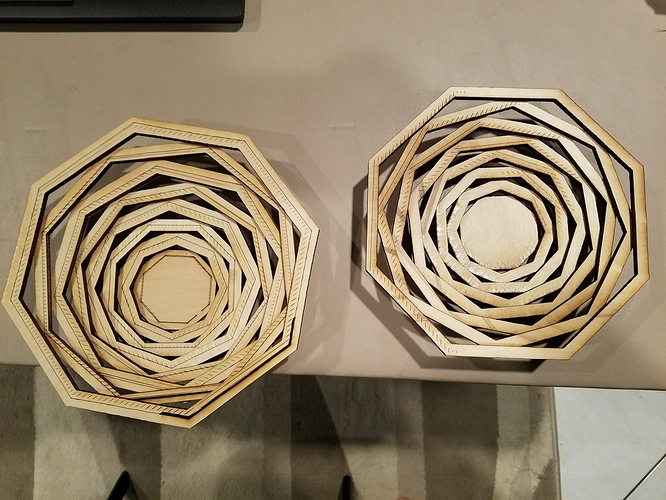 Eight layers of 1/4 inch thick made the bowls too shallow, so I put the pieces together to make the pieces 1/2 thick, and that was MUCH better. They are different sizes, so they look a little odd, but you get the idea: 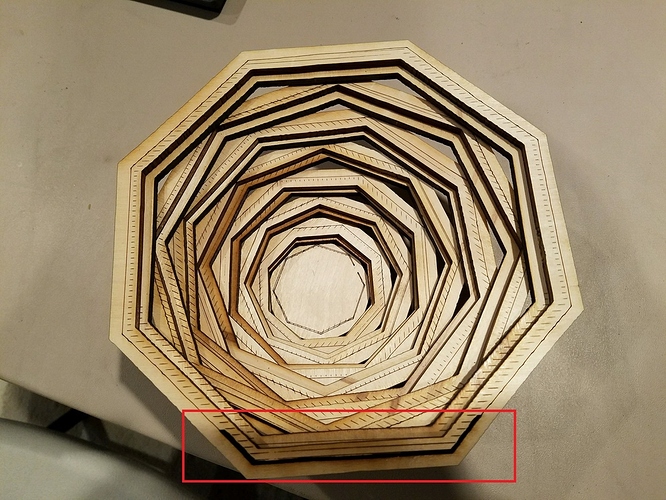 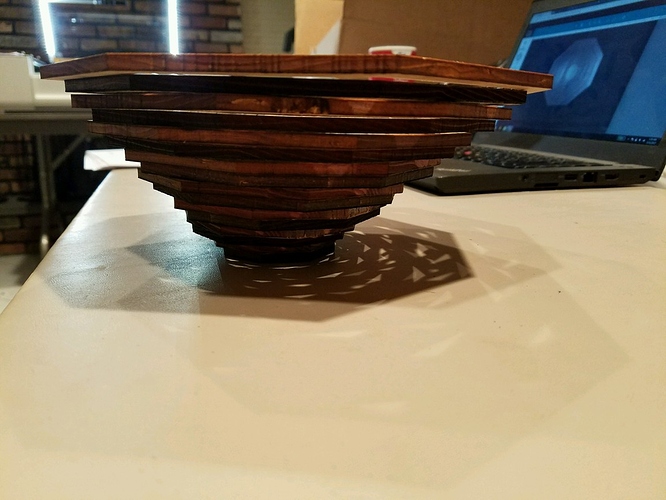 Hope you guys like this; I’ll update it as I make improvements / finalize this…

Glad to see you’re enjoying your new tool. It does apepar to work way better than your scroll saw

If it’s mm/s then I’m going to do the Meeposian Dance of Joy because that’s better than my 60W. If it’s in/s I’ll remain @rpegged in my excitement.

Sorry, I believe it’s inches/min…but that was overkill

Meeposian dance troupes can rest easy, no competition from me.

Hhmm, it maybe could have gone even faster than the 30 / 35(?)…I haven’t tried yet to see what the max speed would be…that would be a great test!

@dan Can GF keep a record of our cuts, so that we can look them up again, later?! Would be soooo handy!

I hoped that successful cuts on non-proofgrade could be stored in a list of some kind and labelled, for later use.

If this is the same Home Depot 1/4 that I’ve been using it has a sweet spot at 80/15. I say “a” as I learned with cnc that sometimes there is more than one sweet spot and only experimenting will find the sweetest of all.

I keep all my settings in OneNote with full knowledge that one software tweak could invalidate all of them. When the software settles down I’ll start putting them into a spreadsheet.

I would expect you to be able to do better if you’ve got the @rpegg class machine (with the Pro 45W optics). Otherwise it’s pretty standard performance for a 40W laser.

Interesting! As I’m very new to all of this: Are there benefits to using less power & slower speed? I’m guessing less scorching, and longer tube life?

Hey, that gives me an idea for the hopper: @dan Can GF keep a record of our cuts, so that we can look them up again, later?! Would be soooo handy!

That is a most excellent idea! I hope it makes it into the “urgent” hopper.

Can GF keep a record of our cuts, so that we can look them up again, later?! Would be soooo handy!

Actually even better, if like Simplify3D you can save a cut set as a template (like the S3D Factory Files) so you can say take the speeds and feeds of that cut and make it “Home Depot Birch Profile” which you can recall later. But at least being able to view the settings in a log is a good start…

Yes, but don’t ask me to explain as I approach this more like Edison than Tesla. I mostly lift settings of things I know work and then extrapolate. I’d love for someone to figure out and present reading a cut the way we read a spark plug.

I’ve gotten where I can read my cnc router pretty well but I have like right at three weeks more experience at this than you!

I really like that you did this with hand tracing and not precision design software. It really shows the power of the Glowforge. For me, not having a woodworking shop, it will be so nice to just draw a line with a ruler and cut it with the laser, quick as a wink!

Off to a great start

That is a great demo and cool project. Getting a design into the Glowforge isn’t that difficult and you showed how easy it works!

For anyone still wondering, and who just wants a summary, it was literally:

And then the magic happens

That’s what the GF Team is, by the way; MAGICIANS!!

Great job. I especially liked learning about your experiences. That is invaluable information and it’s very much appreciated.