The Precision Position Pop Up is in my way

This may be something that i’m doing wrong, but when im trying to position artwork in the bottom left hand corner of my material, the new precision position box pops up and gets in my way. Is there a way to move this to a new location, or off of the work zone?

While you wait for support there are two answers I know of:

Thank you for the help, but they should really consider making this a little bit flexible in its location. I will try out the other option.

It’s been suggested, and you’ve just suggested it here too

We’ll hope that since there has been a lot of new stuff coming that they’ll keep tweaking things.

Many people are unhappy with it. It’s a great feature but needs to be able to be moved, or “docked” out of the way. They need the feedback to know what to work on…

Yes, i was sure that i was not the first to complain. If i was the one who designed the tool, it would of bothered me, even when i was testing it.

Yes, im sure they will.

it would of bothered me, even when i was testing it.

Depends on how you test though. With a large enough screen it is never in the way. It’s a pain on the smaller screens like my cheap laptop.

It’s actually smaller than it was when we were beta testing it, so I’m kinda liking it now.

I just scroll the screen up when I need to see that corner – hardly even think about it anymore!

Yep that is annoying. Hopefully a fix will come along eventually. I’d like to be able to drag it around and leave it where I choose.

I have a 32" screen and it still gets in my way. I can zoom out and move the screen around, but I should not have to do that.

This is impossible to work with on a Windows machine. You have to place it blind, move it… Place it blind, move it. I have a pretty big screen and there is nothing else to expand. I’ll try my phone and see if that works. But, is there a link to the old interface in the meantime?

A lot of complaints have already been made. Nothing we can do but hope they will give us the option to move it around or hide it. Hopefully it’s in the hopper for a fix.

I do all my works on a Windows machine, and I have no idea what you’re running into. Can you post a screenshot of your issue?

The entire box is 1.5" by 7", and easily moved off the edge of your actual working area. Unless your screen is under 10" (eg, tablet sized) you’re missing something. 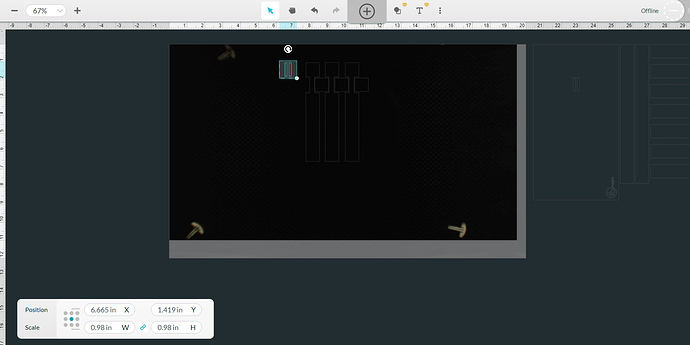 So what are you missing?

I’ll have to try this next time I’m in the app.

All, I understand that I can zoom out, and move my work area around to accommodate my work. Thats what ive been doing since this option was added, but that’s not the point. The UI should work for me, not me working around the UI. One of the main reasons for me purchasing the Glowforge, was for its ease of use. I’ve had other C02 lasers and CNC machines, that are a lot of work for a simple one off item. If you want to make a product great, make the UI great, it’s just a little bit of code to allow us to move the box. It’s not like we are asking for material auto loading, auto cleaning, and or mind reading of the items i want to be completed, but i will take them if Glowforge can make them happen.

My screen doesn’t look like yours. The screenshot here shows what I get if I try to move anything below the halfway mark. Once you click anywhere in the work area the popup appears and that is where my trouble starts. As example, the word home is in view without the pop up until I pass the halfway mark. Sweet can be moved around, but you can only see part of the actual word. If you want to place it, you have to place it blind, move it, and on and on. The pop up box is in the way.

I’m not very good at getting what is in my head out to my fingers, so if I wasn’t clear let me know! 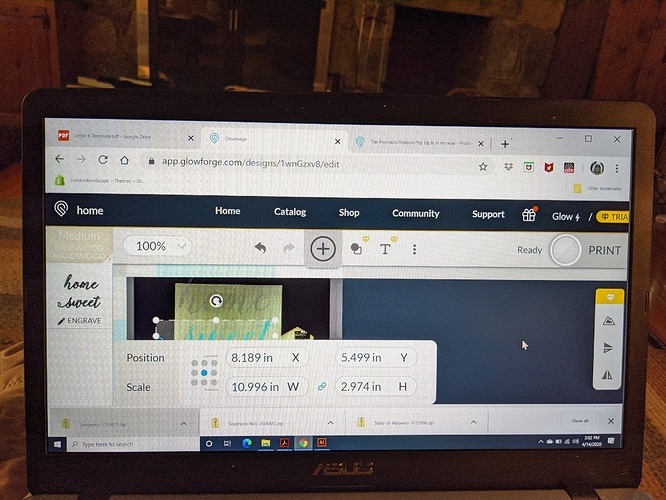 Have you tried scrolling the work area with your mouse wheel or trackpad? You can also zoom out a little to see the whole thing.

I have tried scrolling, clicking and making windows bigger/smaller. It’s not that I can’t move things, it’s that I cannot see behind the pop up screen to place them. I do think it is odd that my screen is so much different space wise.