yet another error i get with the glowforge, its always saying it too hot and doesnt and it doesnt start… I live in Saudi Arabia, its always too hot!

by any chance has any1 found a way around this??

Lots of discussion on cooling. It’ll come down to your specific setup. Can you elaborate on where and how you’ve set your machine up?

The solutions range from “get better AC” to “install a peltier cooler” to “get clever with some piping and an ice chest” (my personal favorite).

If you search for “cooling” on the forum, you’ll find lots of threads. I’ll pull a few of my faves in a second and post them here.

Homemade Cooling System Beyond the Manual

I finally got my cooling system up and running and it works great. It was 82 with the humidity in the room and with this running i got the GF well within the operating temp. I used a 240 mm radiator with 2 120 mm fans operated by a separate switch so I can control the speed. The cooling is done with a tub of water cooled down with ice from the fridge being pumped with a small fish tank pump. While the water will eventually warm up to room temp, i have a thermometer in the water to monitor the t…

Mods for cooling Beyond the Manual

speaking of (and thanks to @rpegg for this photo from today), here’s the picture he took of my ghetto portable AC cooling solution outside. it was about 85 degrees and humid, never had any temp issues. portable AC (10,000btu, effectively 8000btu) plus a fedex box and some gaffers tape. just point it right at the intake on the right hand side. other positive side benefite, if you set your laptop up right next to it, you get a little cool breeze passing through under the GF so you don’t sweat as …

Cooling System Beyond the Manual

Like many I have already run into the problem of the ambient room temperature being to hot to run my GF. As I am very short on space I decided to build a chiller right into my bench. I used two 120W Peltier plates mounted to large 4 tube heat-sinks that are cooled with 3 12v fans each. I used a cheap PC liquid cooling system as a chiller under the GF, mounting the RAD directly under the right side intake. I use a 120mm fan mounted on the GF exhaust to draw the cold air in when the unit is not r…

Stupid but works for ALERT COOLING Beyond the Manual

While the Northern Hemisphere is freezing, we here Paraguay is hot like an oven, more than 35 degree. My cats spend 80% time sleeping, and my GF spends 80% time on ALERT COOLING. Even the fan blows + air conditioner, doesn’t make better. So I used the carton to make a small room with dedicated air condition for the GF (in the tube there’re 4 computer fans to suck the cool air), thanks God it’s finally happy to start work. Well, I think the commercial should remind the customers, “Latinos, no l…

Even this (but beware humidity)

Homemade cooler for Glowforge Beyond the Manual

With the summer heat and a non-airconditioned studio, I’ve found times when I couldn’t print. I found this useful design for a homemade A/C unit on Instructables. Needed: Styrofoam or plastic cooler 4" +/- tube for exhaust Fan Frozen water bottles Tool to cut holes in cooler Instructions: Cut a hole in the top of the cooler for your fan to sit on. It will blow air into the cooler. Cut a hole in one of the sides of the cooler for the exhause tube. Fit tube in hole. Fill cooler …

I get all the hacks for making it… but my issue is I shouldnt be doing all of this!! with the price paid for a GF all of these issues should have been resolved prior production.

I have been working in multiple makerspace across many countries, and have many operated countless number of laser cutters.

A way cheaper Chinese laser can do so much that a GF struggle to do. thats why I would expect to get value for my bucks.

all of these issues

What issues? You read the specs, right?

Even with a Pro, 81F is on the upper limit of the operating range. The GF doesn’t directly monitor the air temp. Instead, it’s measuring the temperature of the liquid coolant inside the case (which is usually warmer than the ambient air).

My understanding… All lasers have the problem of keeping cool to keep from burning out the tube prematurely. (You might want to research how frequently the cheap Chinese lasers have to have tubes replaced.) That would be obscenely expensive with these proprietary tubes, particularly from Saudi Arabia, so the operating temperatures are set low enough to keep people from burning out their tubes too quickly.

Unfortunately, we’re dealing with the physics of the situation. We need to be able to provide a cool enough environment for the machine to function in. We get a slightly higher operating temperature range with the Pro model, but we’re still likely going to have to provide cooling of some kind for it. I live in the Southern US, in a tropical/semi-tropical environment, and I decided that would require the Pro model, and I still have to run the air conditioner at about 75°F (24°C) in the room where I keep it.

Glowforge can’t “fix” this. Try to figure out a way to cool your environment off.
(Plenty of suggestions above.)

as @dwardio mentioned, the operating temperatures are written in the specs. this is one of the tradeoffs you get with the GF. the downside to a completely enclosed unit is that you’re not having big external cooling tanks to lower the temps.

otherwise you end up with things that look like this (all K40 chinese lasers). 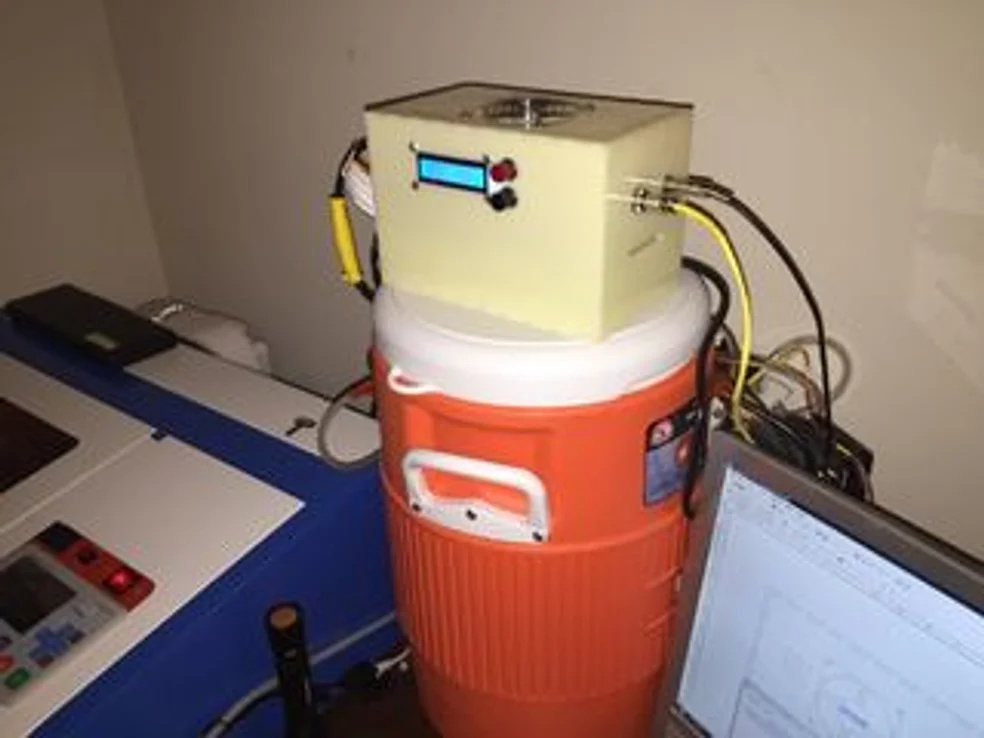 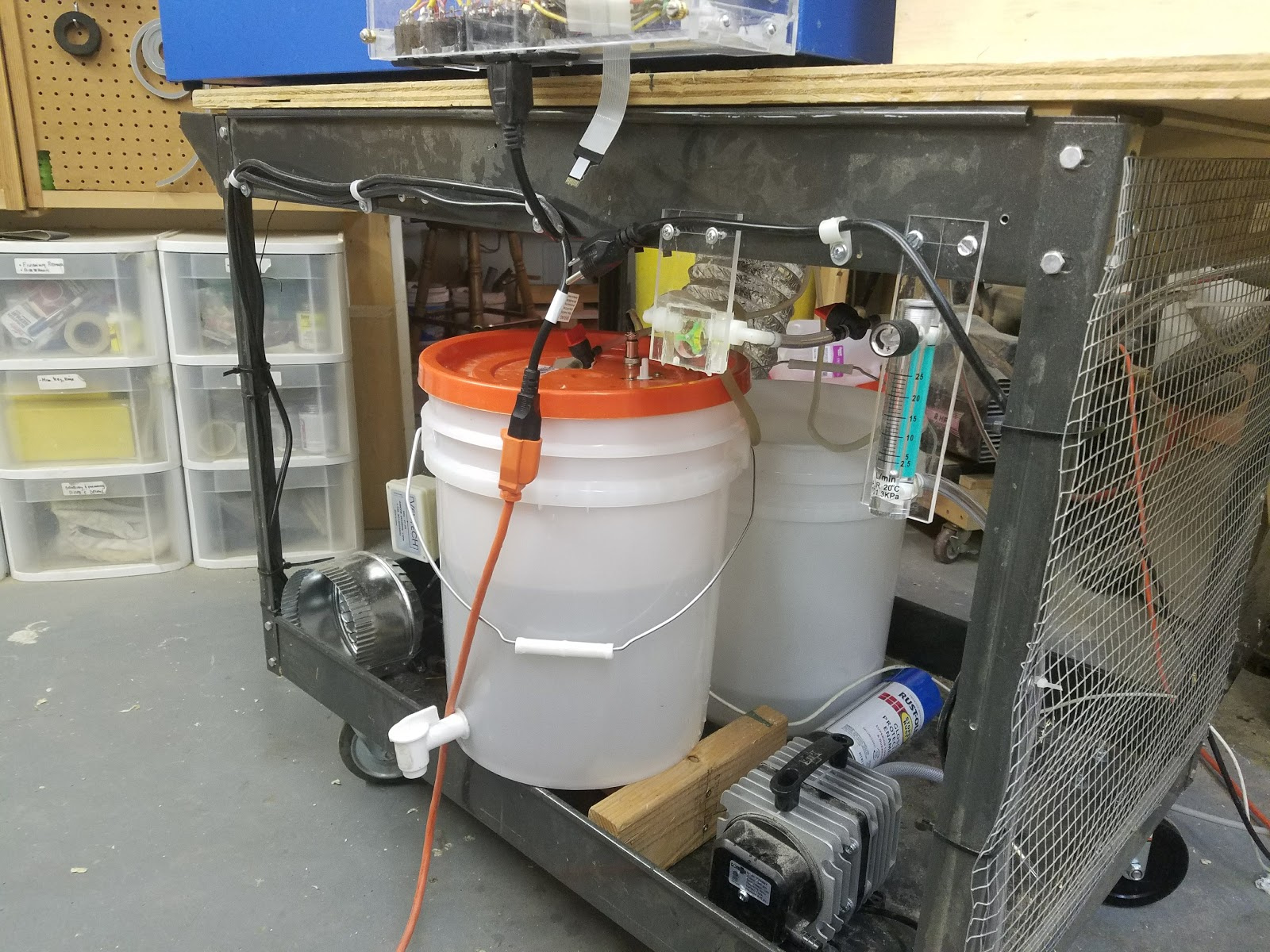 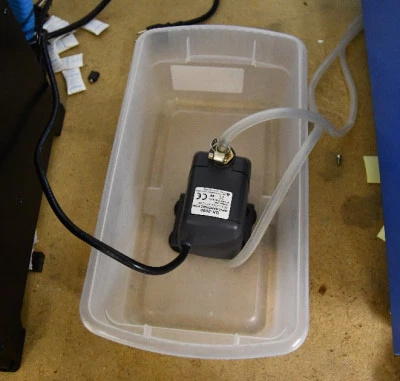 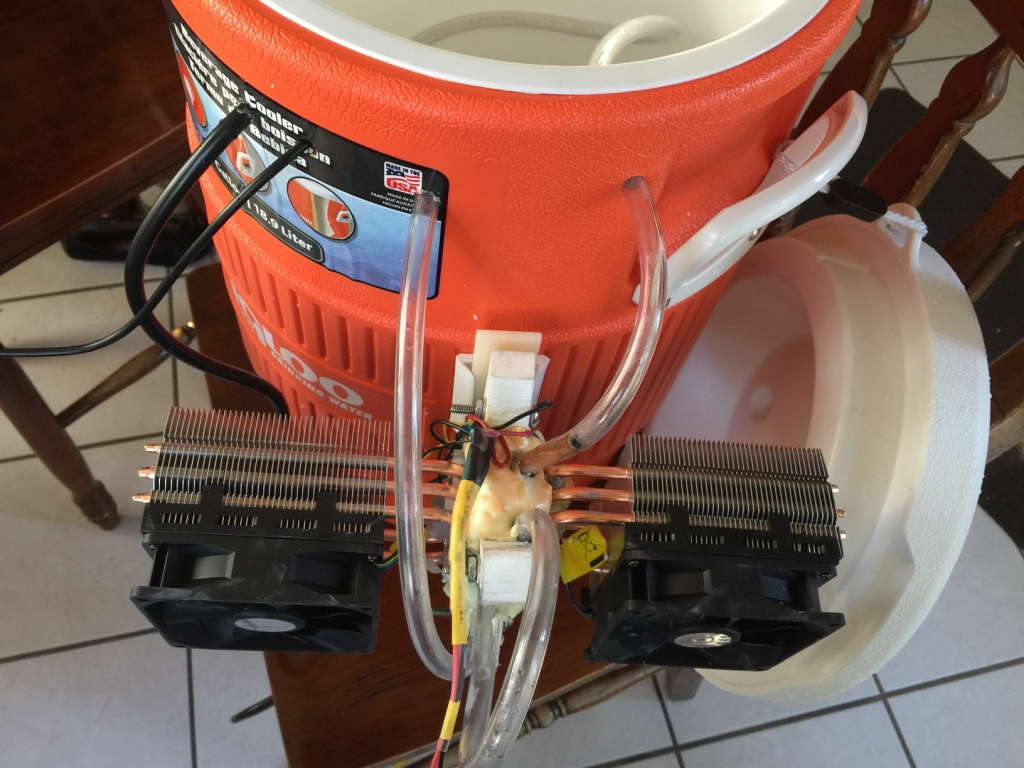 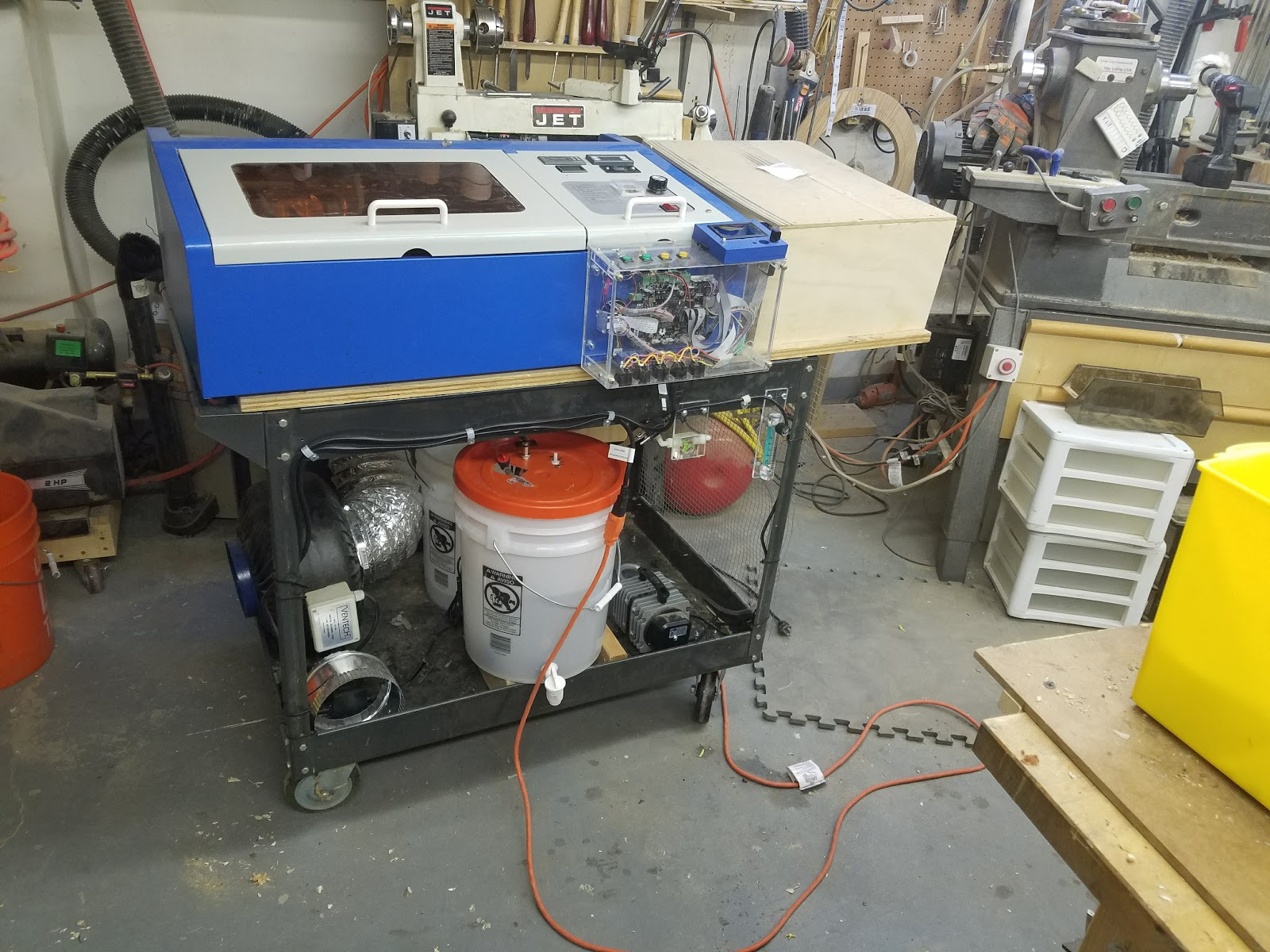 I have pre-ordered this in October 2015, and I dont believe the full specs were out that time

and regarding the Chinese lasers , I have dealt with many, good quality ones because I am yet to change a tube from 2 years, and they run for an average of 8 hours a day

this is one of the examples from chinese lasers: 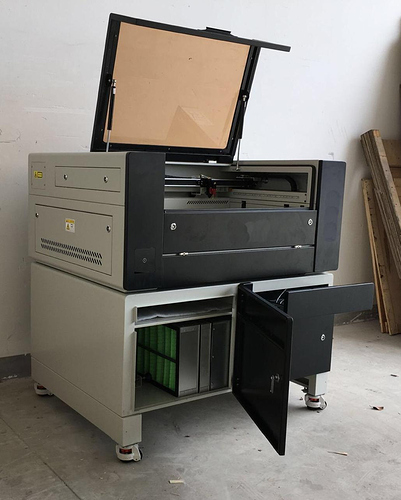 Everything is fully enclosed, just like the GF with small water tank. and I have run it with no problem at 30C or 86F.

Even the fact that i can not align any design to where i want is frustrating. As the camera is not 100% and just a simple laser pointer would have been an easy solution.

Why isnt there side vents with a cooling fan. again an easy solution.

to be honest Looks wise the GF is probably the best i had. Everything else there is no comparison.

Im saying all of this because I am really disappointing in the machine, having to wait for it for few years, and paying this much for it… I expected better

Have you run the Recalibration program yet? (It helps with the alignment issues.)

They really need to update this as its misleading to say “Recommended”, this implies it will probably work out of range. It really should just read “Operating Temperature”.

My Pro has worked up to 84 degrees until it paused. It’s “recommended” because it’s not a hard limit. The machine isn’t just saying - read that air right there as +1f over the limit, so I’m going to pause.

In fact, they’ve had fairly recent updates that they’ve claimed will get a few more degrees out of the machine.

FYI…I have no issues running my machine our craft room is the coldest and only air-conditioned room in the house! 100+ everywhere else and only 70-72 near the Glowforge it’s a reason to keep it running, otherwise, I’d want to turn off the AC and save power.

I only have an issue with the lack of firm, documented information that this company is willing to provide, sometimes also with the amount of B.S. others are willing to put up with. Then again I never uploaded all my personal data to Facebook and complained when it was leaked/sold either…

And I wish folks would stop picking nits over individual words.

Car owners are used to recommended oil viscosity and fuel octane specs. The manufacturers recommend that you use a range of products and will stand behind their product if you do. Run your car on methanol and you’re on your own.

If you operate your GF within the recommended temp range, it will maximize performance, results, and runtime.

If you operate your GF within the recommended temp range, it will maximize performance, results, and runtime.

Specifications are meant for nitpicking, they are supposed to be solid numbers that help you decide which product you want to purchase. I also understand that a large majority of us bought the product before any of these numbers existed. That makes us early adopters and we tend to suffer some consequences for that. For standard consumers, which the Glowforge is targeting, these values have significantly more meaning and impact if they are inaccurate.

The problem is everyone is measuring temp slightly differently. Where are you measuring? How accurate is the device? I’m sure they can give you a specific temp for specific location, but that doesn’t mean what/where you measure is exactly the same.

So you may say, “it’s 75 degrees,” but your measurement may not be exactly the same as what/how GF measured. Or how I measure. Or how @dwardio measured.

Gotta window with afternoon sun coming in? Have it sitting in standby which means the coolant is not flowing? Dirty exhaust fan? 110 degree heat coming back in through your exhaust plumbing? Have a piece of paper sucked up against the intake grill? All of those have happened.

This 100 times over, you have summarized my point exactly. All I’ve asked for is to see Glowforge post more accurate information. If this involves telling us, the customers, where the sensors are and what the applicable ranges are we all win.

Each Glowforge uses the same sensors to determine the temperature and assuming they are using calibrated sensors that are located in the same place it wouldn’t be that difficult to tell us how far out of spec we are along with possible actions to remedy the situation.

My only issue has ever been the lack of clear information that flows from this company. I love the machine, however, I am not naive enough to believe that my mother, a life long a craftsperson, would be able to use a Glowforge without significant training and a lot of frustration.

This 100 times over, you have summarized my point exactly. All I’ve asked for is to see Glowforge post more accurate information. If this involves telling us, the customers, where the sensors are and what the applicable ranges are we all win.

This would be useless info for the vast bulk of users and function more as noise than signal. Stay in the recommended range and you’ll be fine. That’s all they have to say. Why is this even still a conversation?

This would be useless info for the vast bulk of users and function more as noise than signal.

I totally agree, and now we’ve come full circle to my very first post. They should drop the word “Recommended” and just say “Operating Range”.