How important is it that I disconnect the Forge from the vent hose when not in use? The outside of the window attachment does have a flapper that closes when there isn’t air blowing. Can I just leave it connected? This would allow me to jetison this quick-disconnect, which I think is the source of at least some of the leaks.

My GF came in yesterday. Everything seems to be working great, but given that by the end of the founders ruler the odor in the room was getting kinda “sharp” I was hoping I could get a bit more background on people have been sealing their ductwork.

I’m going to add some more pictures to this thread in the next day or so of my current setup (I suspect I’m using the same window vent as @mhumphrey ) The main thing I’m curious about is how everyone is taping to the GF - the duct connector is quite short and I’m not sure how you went about taping it. @rpegg do you have any pictures of your tapework?

@jameshatch suggested to use aluminum tape around every joint, not duct tape. This worked wonders on my unit.
Here is the thread discussion. It’s buried in there somewhere.

My Glowforge up and running!

True, LOL. My exhaust is out a 2nd floor window, The wind dissipates the smell pretty fast. I just need to eliminate all leaks in the system so it forces as much exhaust outside as possible.

I will take pictures if you want but just used two cheap 4" worm gear vent clamps to attach the vent hose to a dryer vent and to the GF exhaust as you would expect. Nothing special. Then used common metal foil heating and AC tape that you can get almost everywhere, including Walmart. No particular name brand. Wrapped it once around the two connections and made sure to press it in place to seal all of the little air pockets. Already had a good seal at the GF exhaust port. My leak was at the dryer exhaust vent on the wall.

Don’t get too crazy with the tape since at some point you will have to remove it to clean the exhaust port.

Thanks for creating the continuation thread. I realky dislike the way GF is constantly locking threads.

@buschtrent / @rpegg
I’m sure I’m just being dense, but I’m not sure how your getting the tape on the GF side. The following is a picture of my GF vent - I can’t really pull the hose back much or it will fall off - were you putting a 90 bend in the tape? or taping at funny angles? How did you get it on there? 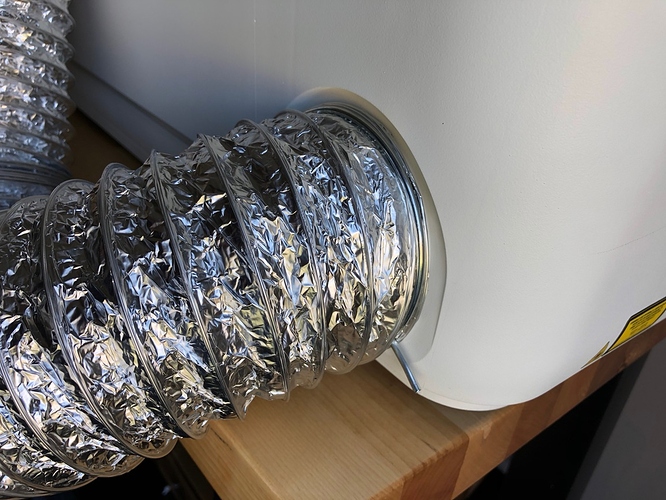 I’m sure I’m just being dense, but I’m not sure how your getting the tape on the GF side.

Tape from the tube to the outside of the recessed area. Yes, it will look messy.

Alternatively, you can use a better tube and better clamps, then taping is not needed.

This is part of the GF design that should be changed in V2, IMHO. The tube should extend farther out the back, or the cutaway should be bigger to allow the clamp to fully seat. Aside from the over reliance on the lid camera, it is the biggest design flaw.

I can’t easily get to the back of the unit until late tomorrow. When I received my PRU unit in February they did not include the hose clamps. I had two 4" worm gear clamps that are commonly used for dryer vents. Those do not have the metal ears sticking out. Don’t over think it. Here is an idea of how ugly it can be on the wall. But works just fine. 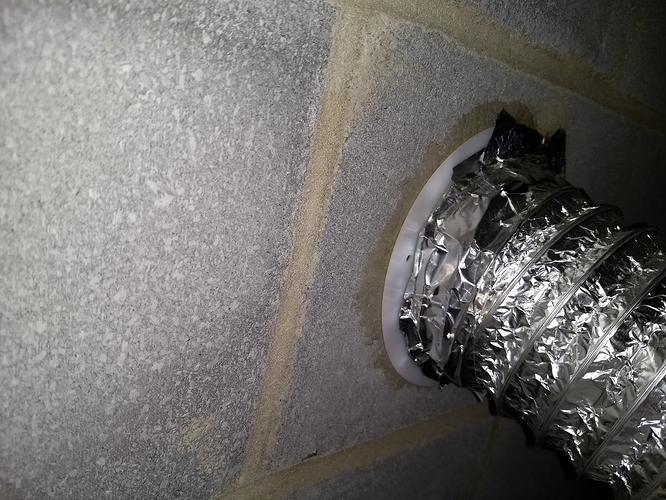 Agree. I used small pieces and taped it as carefully as I could. It looks bad but nobody sees it.

The tube should extend farther out the back, or the cutaway should be bigger to allow the clamp to fully seat.

@marmak3261 developed a 3D printable extension for the back.

They’re also made commercially. Supposed to be 4" ID on one end and 4" OD on the other. I got one and it was too oversized to make any kind of decent fit on the GF exhaust. I’ll look elsewhere (found that one on Amazon) and bring some hose to check it before buying to see if there’s an alternative for the 3D printerless crowd.

If you get this type of tape, it is more “conforming” to difficult angles than the standard acrylic adhesive foil tape, and it is also way stickier. I found that in my usage, regular foil would seem like it’s on perfectly tight but would eventually pop up just enough to let some smoke escape.

@marmak3261 developed a 3D printable extension for the back.

The tube should extend farther out the back, or the cutaway should be bigger to allow the clamp to fully seat.

This is the link to the piece that @marmak3261 created.

3D modeling approach for flange design? Everything Else

Some measurements for dialing in the flange extender. [IMG_0210] I went with a 3mm thickness to account for the slight draft to the flange [IMG_0211] I didn’t include ID for my variables. Just OD, thickness, flange base and flange extension, an inner dimension and an outer plus base thickness. [IMG_0213] Used 97mm for OD. [IMG_0215] The depth of the outer flange wall to case I used 13mm to not have it bottom out. Holds on snug with that amount of vcontact area. [IMG_0218] The are 10.…

Thanks for digging out the link.

I’m still on my hunt for the commercial version.

Although come to think of it, I don’t know that I actually measured the ID of the adapter I bought. It might be that the OD of the flange on the back of the GF is smaller than the 4" that the hose is designed for and that’s why the adapter was too big (but it was the right size on the other end to take the 4" hose). I’ll measure it tonight to check.

I bought a commercial one, and it did not fit; it was way too loose. I can’t find the link to the one I bought at the moment.

This is the link to the piece that @marmak3261 created.

Thank you. I don’t do 3D printing at the moment, but I am going to bookmark this for possible future use. And I am sure others here will get some use out of it.

Man, I should leverage this position a bit and help some folks out. Though 3D hubs gives a PLA quote of $16.00 for my flange, then there is shipping.

I don’t know that I actually measured the ID of the adapter I bought. It might be that the OD of the flange on the back of the GF is smaller than the 4" that the hose is designed for and that’s why the adapter was too big (but it was the right size on the other end to take the 4" hose). I’ll measure it tonight to check.

Well, my improved exhaust hose and clamps are working great. I only smell anything at the end of the job when the fans cut off (come on GF, how frigging hard is it to update the code to leave the fans on longer?).

The problem was apparently leaks around the window vent - solved with some weatherstripping and copious amounts of foil tape.

Well, my improved exhaust hose and clamps are working great.

Yay! It’s such a better experience when you’re not breathing the fumes

Now, off you go to laser everything!

Thanks @jamesdhatch, @jbpa for suggesting and finding @marmak3261 flange - and many thanks for @marmak3261 for designing its awesomeness and giving away the STL!

I had a friend print me a copy 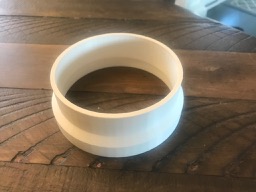 I think it really did help with the seal on the GF side a lot - great fit - tight, but not breaking anything.

I still don’t have my venting issue completely resolved, but I do seem to be getting closer

I use this to attach the hose to my GF. The rubber boot makes a tight seal on the short flange of the machine. 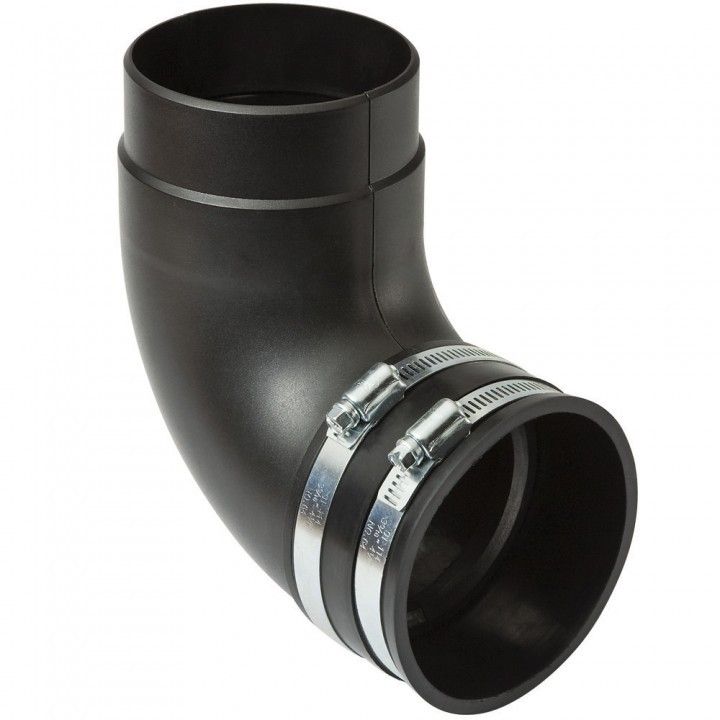 11 Likes
It's beautiful
next page →