Where is the "auto trace" option in GFUI?

I don’t see the auto trace option that has been talked about in the GFUI.

I upload a raster image to a new artwork file and I want to cut out around it. I have read in a few places that GF will automatically trace around the engraving to cut it out…

My GF is not connected - I can only get to the space I rented once a week to cut - I am trying to learn the GFUI and prep files / design as much as possible while away from the unit.

When you say your GF is not connected… Your account must show that you have received a GF to get to the GFUI. See Trace.

I have the GF in a rented space across town and can only get there once per week. It is registered, but I am obviously not on the same WiFi.

My thought was to do design & prep during the week and go there once per week to get max cut time in… this is now a challenge since the GFUI is not as easy to work with as it seemed it would have been (no saving settings, no organizing files, no manual save, inconsistent autosave, etc.)

I thought I read that there was an autotrace for raster images that you UPLOAD in addition to the ones you take a picture of with the camera. Was this incorrect?

I’m trying not to assume too much from the wording, so bear with me.

Not really sure what you mean when you say Autotrace. Doing it automatically would be incredibly difficult without user input. Images can be sent to the GF easily for engraving. If you want an outline to cut around an image that takes about 30 seconds of user effort in a free 3rd party program such as Inkscape. I would upload the image with a cut boundary at the same time.

Currently the S/W doesn’t save settings or have a file/folder structure. Have zero doubt those will be added but couldn’t guess whether it will be a month or half a year. Doubt it would be too long only because it is the most user requested feature. Also not sure what you mean by an inconsistent Autosave since it does not yet have an Autosave feature.

Several of the outside drawing programs have the ability to add a cutline through their auto-trace functions, with varying degrees of difficulty. Save that in the file along with your engraves and they stay aligned perfectly.

You haven’t said which programs you are working with, which makes it difficult to direct you to the tutorials that would help, but :

The trace tool in Illustrator can be a great tool but sometimes you spend more finagling with getting a clean trace than you should. The following is a quick way to get easy outlines of objects (very useful for cutting). You can also use it to send any Photoshop path to Illustrator in a vector format - useful for things like the Symmetry Brush in this post. I want to trace a cut line of this walleye fish. I could use the Illustrator trace tool and delete the unneeded components. Or, I could spe… 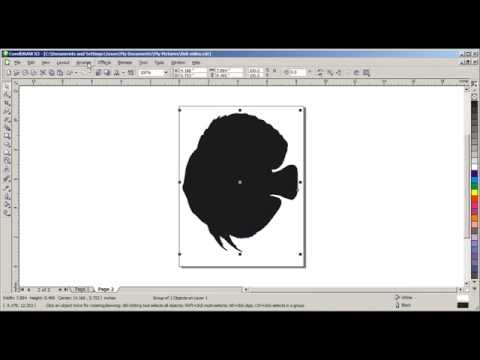 Great stuff @rpegg and @jules! Leaving this open for a while in case there’s more to say…

Not that I’m aware of. If your issue hasn’t been resolved, and the case has been closed, you need to open up a new case.

It’s really not meant to be a “discussion.” It’s supposed to be a problem and ultimately a resolution. So if it’s been resolved, there’s kind of nothing more to say about it. If somebody has a similar issue and the resolution shown doesn’t work, they can open their own case. I suggest it’s really better that way since investigation often requires looking at a specific unit.

If GF is anything like every other company on the Planet, Support staff will be partially rated on metrics, including closed support tickets. If you want to talk about something open up a discussion in another category.

The actually open cases and review all messages in this forum?

We should really think of this forum as several different things that happen to live under the same roof. One of them is a discussion community, which you can find in categories like Everything Else and Beyond the Manual.

Then there’s this category, Problems and Support, which works differently. It’s more like a public issue tracker. Closer to http://bugzilla.mozilla.org or https://github.com/golang/go/issues. The community is able to participate, because overall it helps to be able to search and find that a problem has been encountered before, and because some of us are crazy enough to spend time here trying to help each other. But posting something to Problems and Support opens a ticket with Glowforge customer support, and like any ticket tracking system, accumulating a backlog of open issues is a problem. I can’t blame them for closing things here when they appear to be resolved or there’s nothing left to do. I have, sadly, a lot of experience being on the receiving end of giant bug databases. You have to be rather ruthless about hygiene or they will rapidly spiral out of control.

Anyway, we always have the option to continue the discussion – there is a button under each post with a little chain link. If you click it, it has a button to branch off a new topic, potentially in a different category where we can go on tangents and have hypothetical arguments without keeping a trouble ticket open indefinitely.

Problems and Support is not (really). I guess you could say it’s a goal-specific discussion. The purpose of which is to solve a problem. With the exception of “Announcements,” the rest of the forum is for “discussion.”

The actually open cases and review all messages in this forum?

A new thread in Problems and Support is an open case with Glowforge. They review all messages in it.

The Problems and Support area is the only area of the forum that the Support team monitors. We post specific (single) issues here that we need help with from them, and they open a ticket on it, if there is not another ticket opened through a direct email.

When they resolve the problem on their end, or when others here have resolved the initial issue with the original poster, they close the ticket, and the thread.

(They have hundreds of these things to monitor, when they close the thread, they don’t have to keep re-reading it here. It’s a more efficient use of their time.)

Subsequent discussions can be continued by linking to a post in Everything Else, if folks want to continue the discussion.

Nope. The moderators are the only ones with the ability to lock and unlock the threads.

They can link to the thread and continue the discussion in Everything Else. The Problems and Support Area is controlled to try to keep the chatter down to a minimum and actually focus on resolving issues. The Everything Else category is wide open for discussions, opinions, parties…whatever.