Close But No Cigar

I’m starting to notice some alignment issues the more I use the Glowforge. This is just with using the camera for alignment, but it is still frustrating.

In this first picture, you can see on the monitor where it showed me the print would happen: 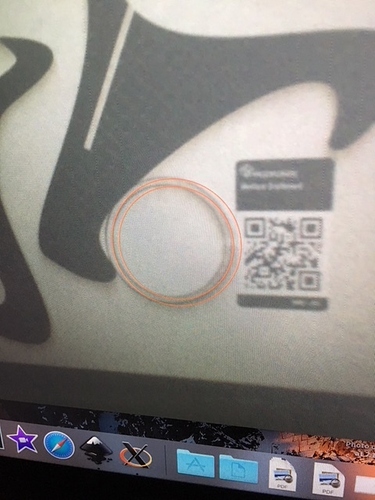 Next, a picture from the Glowforge, before the lid is raised after a print: 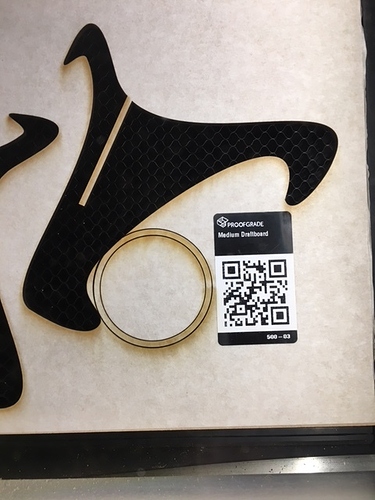 You’ll notice in the first one that the orange circles were showing it would cut into the white part of the proofgrade circle. In the actual print, it was not even touching the sticker, but rather shifted it left enough that there were flat spots on my circle because it bumped it up against a previous print. 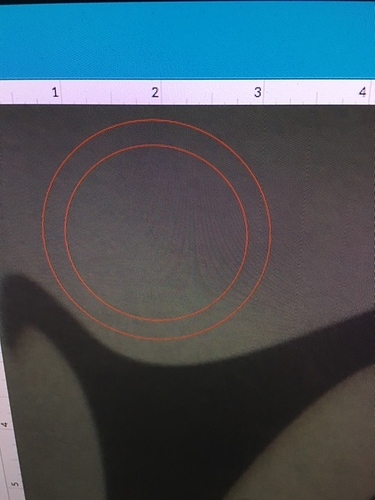 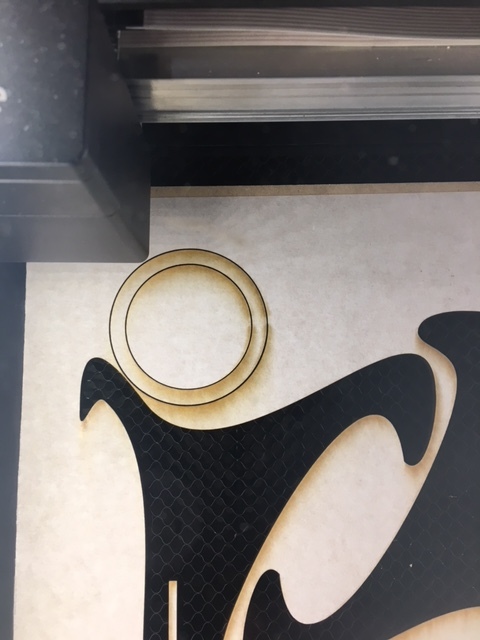 Is this normal? Are you guys seeing this same kind of thing regularly?

Yup that’s totally normal. The further from the center, the more margin you need to give. That’s probably not going to get a lot better even though they claim to still be working on it. The best way to get efficient cuts is to do them at the same time, as operation-operation accuracy is real good, as long as the UI isn’t closed or the material isn’t moved.

Good tips…thanks! And good to know I’m not the only one. It just makes it really hard to use as much of your material as you can without waste.

And that’s disappointing that it will likely not improve from what it is now.

The really really good news is you can get a ton of use out of your stock.
If you had a laser that relied on coordinates for positioning instead of a camera, you would be throwing a good deal more of material away.
The UI makes it so easy to utilize what would otherwise be scrap on a lesser device.

Good point. Using coordinates would only work well for material usage of doing it all in one print job. There would pretty much be no way to put a partially used sheet back in and guess where those holes are.

You might give this method a try. It works pretty well and once you determine your offset you can reuse the numbers for multiple jobs. It does need to be repeated from time to time as they do updates to the software.

A way to improve object placement Glowforge Tips and Tricks

Here is the method I use to compensate for the slight offset I currently experience with object placement. This method will probably be obsolete when precision alignment is available but in the meantime it can help if you want exact (or at least extremely close) placement of artwork on the bed. Using this file: [image] Upload it to the GFUI. Set up a score. Attach a piece of graph paper (here I’m using 1 inch grid divided into tenths) to a piece of card stock and measure the thickness w…

As always I refer back to using jigs as the only way to be dead sure on placement. That being said, I’m also a fan of the economic argument for “close enough”.

I posted about it here, but the whole thread is pretty good discussion:

I saw someone on the Facebook group that had received their laser and mentioned their general rule on other lasers they had experience with was to not keep any scraps less than something like 6”x6” - and how that rule went immediately out the window with the Glowforge. You might not be able to get 100% yield - but you can get quite a darn bit with almost no effort.

I’m going to have to give this a try. Thanks!

There is definitely “good enough.” I just need to keep this in mind and not try to be so cheap with materials. Going to read through the discussion now.

Wow! That makes what I’m complaining about seem like total whining! That’s a TON of waste!

Jigs sound good and when making a lot of the same small thing a good way to go, but no matter what you still have to eyeball the first cut even if it is to make that jig, and for many things that first cut is “the cut”.

What also helps is before you "eyeball"that first cut to reboot the whole machine and before turning it back on, move the gantry all the way to the back making sure both ends are touching the back. I was having a lot of trouble with horizontal lines that weren’t horizontal til I discovered that was the problem. It does not have to be off by much, to throw everything off by a lot more.

A newly rebooted machine will be about as accurate as it will get, and any recalibration that happens will move as close to that booting calibration as possible so the change can be the least.

Nope. You don’t have to eyeball the first important cut at all.

I just used this technique today on a small piece. It’s rock solid, accurate to about a kerf if done correctly.

I just made a batch of joists 19.5x2.65 stacked for four at a time. There was not much room for jigs. The only wood outside all the cuts that was visible on the screen was at the bottom where I have standard offsets.even the hold down pins at the last hole in the crumb tray ended up getting cut.

It will be interesting to see if I can create a 32" X 72" span that can support 300 lbs with in the Glowforge limits.

I concur. I don’t eyeball any cut placement on jigs… I just set it up in the file and hit print.

You should be able to easily achieve sub-millimeter precision with a jig like this.

I did three passes on this and the head jumped again just this past hour on what I presume is the third pass. 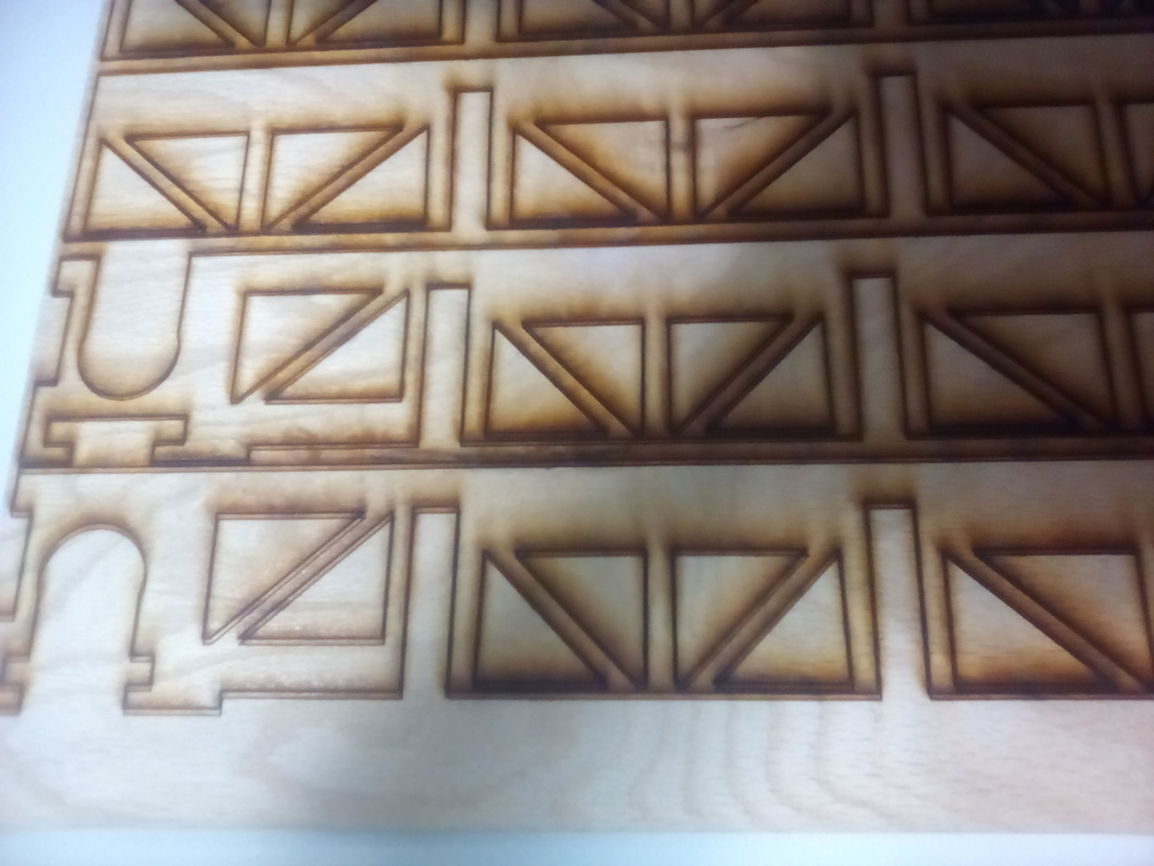 What has support said about the subsequent passes not aligning?

Not much as yet. They are “working on it” I need to show the problem on a proof grade cut that is only a single pass in any case.

I engrave a lot of large cutting boards. The finished size of them is often 11.7"x17.5" so there is really no room in the Glowforge for a jig in that instance, just as @rbtdanforth said. So far, I’ve been able to use some painter’s tape for masking and layout. I will use a square and draw a line at the bottom of where my imprint needs to be. That way, I can do a pretty good job of making my engraving parallel to that line, which is perpendicular to the sides. Also, I will mark a halfway line on the piece so I can line it up in the center. It is not perfect, but it is darn close. So far, nobody has been able to tell.

I think what I would do there is create a rectangle about 10.5x17.5". Then, I’d delete the bottom line out of the rectangle (leaving 3 sides to score). Set up your design and score in one file so that it’s properly aligned relative to one another. Score the 3-sided alignment aid onto a piece of chipboard, or cheap sacrificial material and place my cutting board right on top of the score. You’ll be aligned to two corners, two sides and the back side, which is enough for it to be aligned square.

I agree with @jbmanning5 more or less though I prefer to back the cutting board up against at least one edge, rather than eyeing it on top of a score. Even if you just use the one edge (like I did with a 12x18 slate cheeseboard in the post I mentioned above) and align it to a score line, you should be able to get <1mm precision. I really do need to thoroughly document this process.

If you want to lock in a corner, it comes down to actual engrave size. I get that the cutting board is 11.7x17.5, but how large is your actual engraving? I could get a corner jig to work on that cutting board with an engrave as large as 10.5x18, I think.

In your case it may not be worth it, you say that your process is working well, so then go for it… but if you want or need to get kerf-level precision, corner jig away.