Drove accross the border to pick up GF... got home and it's damaged!

Hello,
Please be aware that I already emailed support with this issue and I’m posting here for the Community’s benefit.

With my van in the shop, I found the time to borrow someone else’s van and made the 3 hour trip to pick up my GF basic from across the border in NY. I had originally though of opening the box when picking it up to make sure everything is ok but the box was in great conditions so I let it be.
Customs here in Quebec took ~355CAD duties, for those who are keeping track.
arrived home, gently placed the GF on it’s desk (Canadian Tire has a few great options: more on that a different time!) and let it be for a few hours: I figured it should acclimate to the right temperature and I wanted to read the manual before opening it.
tonight I go to remove the orange tape and I realize the lid came off the glass. it looks like a clean split: either it never stuck to begin with or the crazy low temperatures we had last week caused it while in transit.
I don’t think anything else is wrong, I checked inside.

now I have a dilemma: technically I would feel confident enough to glue it back up myself, as long as they give me some suggestions on which glue to use etc.
however I am afraid they will want me to send it back, also I fear that since the camera rest on the glass, perhaps regluing the lid somehow affects the factory calibration.
and that would mean for sure 2 more trips to the border!

not sure how to feel about all this…

so if you are Canadian and are thinking about shipping it to the usa and picking it up, keep all of this in mind. 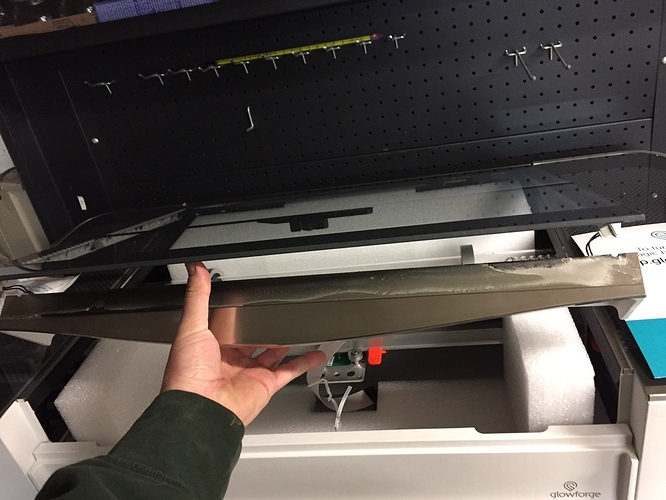 UPDATE: support wrote back (boy that was quick!) and -unfortunately- I need to send it back. no discussion about the option of glueing it back…

From your picture and after looking at mine I would have just glued it back. If the glass is still secure at the hinge then alignment should not be an issue. It looks like that is just the lid handle and led light support.

For what you will have to go through to ship it then all that driving to get another will be a PITA. Come on support, give the guy a break and let him try gluing it back on.

Ouch!
Not sure, but I think the wires seen there are connecting the magnetic switch that is a safety interlock. That I would guess is the reason they want it back, they have a legal obligation to ensure operator safety and can’t afford to take chances.

If the box shows no damage/creases in that area, that would suggest to me a failure of the adhesive, maybe temperature related…?

I think the wires are for the LED lights. But even if the lid holds only the magnet your theory might still hold… tho it’s more likely the interlock would be by the hinges side.

the box, like I said looks fine. although I wonder what obligation does UPS have to follow the “this side up” sticker the shipped places on a box? did GF actually pay extra to claim hat service? if not why would ups or any other company sacrifice double the floor space, double the manpower just because someone placed a sticker on it?

It seems like at least a couple of other people have had the same problem (of the fraction who come to the forum to post about it). As someone with an avid interest in understanding how systems go wrong, I wish Glowforge were at liberty to share some juicy details of the failure analyses they have undoubtedly done to understand these and other recurring issues. Maybe it’s a bad batch of glue, maybe someone at the factory isn’t doing a good job, maybe it’s extreme temperatures, maybe it’s just a fluke. Either way, they’re making it right… I’m just so damn curious.

Just got my Glowforge delivered, and ran into a snag right off the bat. Sometime during shipping, the front part of the lid fell off. It looks like most of the glue on the lid failed, and then the normal transport rigors caused it to fully delaminate. Here’s some pictures of it: https://imgur.com/a/8vb72 None of the connectors for the lights are damaged either, which is fortunate. The light strips are holding this to the frame, but nothing there looks damaged. The shipping container itself had…

I wonder what obligation does UPS have to follow the “this side up” sticker the shipped places on a box? did GF actually pay extra to claim hat service? if not why would ups or any other company sacrifice double the floor space, double the manpower just because someone placed a sticker on it?

None, no, and they don’t. Sorry for your experience!

There aren’t any LED’s in that lid handle, or a connection that runs through there to each side. Those wires terminate at the interlocks on each side.
I didn’t design the machine, but I have lived with one for 8 months. I’m all but certain the circuit for the LED strings, camera and interlocks connect at the back of lid where the hinges are. You can see where the ribbon cable “T’s” and runs to each side.
At the front of the lid you can see at the end of the light string there is a connection on each side that connect the magnetic interlocks inside the lid front edge.

OUCH! I’m really sorry to hear that. That was one of my big fears about picking it up cross-border. I almost didn’t do it because of that fear.

I’m glad I didn’t wait because I’ve made some cool stuff in the meantime, but it’s definitely something to consider for us Canadians.

Keep us updated when you get your new machine.

I’d actually be pretty disappointed/upset if support dealt with this issue by having the customer attempt to glue something back into place that should’ve come that way from the factory. The proper thing to do is to request the broken machine back and replace it. This helps them to figure out what’s going wrong, since this appears to be a recurring issue. It also lets the customer get a new device instead of a broken one that they had to repair themselves. I understand the hassle of shipping back and forth, especially with the additional driving across the border and all that entails, but it’s really the best option. I appreciate that they want customers to be happy and have fully functioning devices, rather than keeping a broken one. I also hope this helps them to iron out any issues with the assembly or shipping for subsequent shipments, including my own.

The lid on my PRU separated at the back left hinge back in late July, early August. Sounds like it might put this particular issue in the fluke category.

I had to drive Dexter (My first Glowforge) back over the border to get a replacement (Dexter 2.0) - Thankfully I’m not far from the border only about 20/25 minutes.

Anyways - the best tip I have is to have all your paper work. Print off the email that Glowforge Staff sent you regarding shipping it back and how they are replacing it. When I took Dexter back over the border, I showed the TSA officer that I was doing an exchange and the email was proof.

Coming back with your replacement - have all the paper work again to show that the one you are bringing back is indeed a replacement and that you had already paid tax on it.

My trip was smooth - CBSA only asked why I got a replacement and I said the old one was broken. She just waved me through.

Same thing happened to me when I opened mine this morning, though I didn’t have to cross the border/pay additional duties. I surmise the cold temps in the Midwest caused this, but also it’s just poorly attached/is a weak point.

Support was pretty quick to respond and I appreciate that. I asked about just swapping the lid as it seems fairly straightforward if you’re up for that sort of thing and was told no.

I thought about gluing it as well, but something just seems annoying about that on a multi-thousand dollar machine. I also didn’t want to void the warranty if I need to use it later for some reason.

What really gets me though is I asked for an estimate of when the new one will ship and was told: “I don’t have a more precise answer quite yet.” I didn’t ask for precision, I asked is it next week or a few weeks just to get an idea.

We’ve waited 2+ years for these (which I understand and actually appreciate), but I finally get mine, it’s broken, and they can’t tell me approximately when. Are RMAs at the front of the line, a few weeks out, or something else?

Sorry to hear. Same as @polarbrainfreeze and @SunnyStarbucks I did the cross boarder pickup. Luckily I had a small problem that support let me try to fix myself(bent pin connector to head). I wish I had time to run the machine more because she runs great.

Ahh, that’s unfortunate! Hopefully the replacement gets to you soon.

I got my shipping email this morning, will be crossing over to NY next week to pick up. Fingers crossed!

Are RMAs at the front of the line, a few weeks out, or something else?

Based on others who have posted about replacements, they seem to arrive pretty quickly.

I wonder what obligation does UPS have to follow the “this side up” sticker the shipped places on a box?

I watched the UPS guy delivery my unit, and my own “this side up” sticker was respected… in certain other frames of reference, but not my own.

I watched the UPS guy delivery my unit, and my own “this side up” sticker was respected…

well, you know that the last leg of UPS delivery respected it. that box could have been stacked any number of different directions/angles all along the way and you’d never know.

None, no, and they don’t. Sorry for your experience!

They sure don’t. I witnessed my driver carrying it sideways (in one hand - pretty strong grip).