medium maple. The diamond knurl tiled pattern is courtesy of @mpipes in ‘Free Laser Designs’. So much fun exploring the capabilities of the glowforge!

The diamonds are each 4 sided pyramids that terminate in a point. With the pattern at this scale I couldn’t go quite deep enough to get to the point without penetrating the work, but close enough! 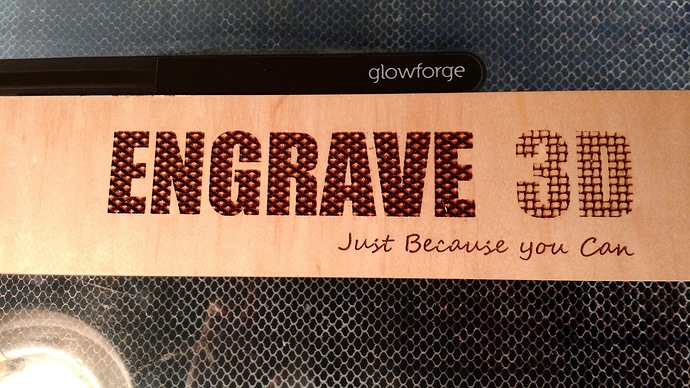 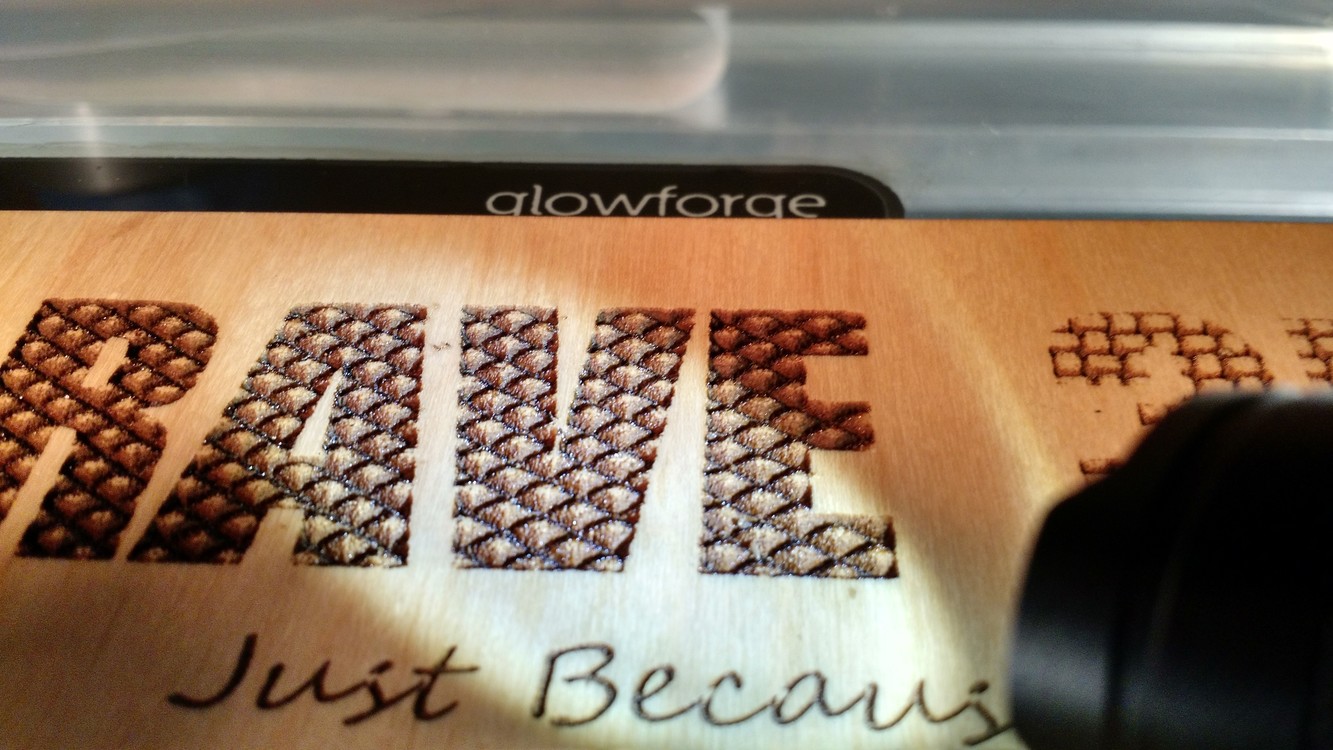 What the glowforge makes possible for me to accomplish seems bottomless.
It amazes me to watch the power supply dynamically ramp up and down the profile as the head travels full speed.
I can better appreciate the company had trouble securing the design and manufacture of the PS.
That is probably nothing special to some of you pros out there, but it’s like magic to me!

Never thought to use the texture on text. Another great idea!

I was laying in bed pondering the machine, and my eyes popped open when it occurred to me.

Man, that’s snazzy! I havent even tried out the patterns I made. LOL!

Guess now I gotta get on that. hahaha!

Nice! And considering some other laser cutting company said that variable per engrave is not doable…yes it is a pretty nice engineering feat to get this to work this reliable.

In the ‘Just because you can’ font, puzzling me as to why wherever the stroke joins or crosses it defaults to a negative and I get those voids in the lettering.

If you are using Illustrator, you need to do the Pathfinder…Unite command (I’m sure somebody knows the Inkscape equivalent). That way all the overlapping individual letters will lose those overlap bits. First time I did this on an engrave I had the same puzzled head scratching. 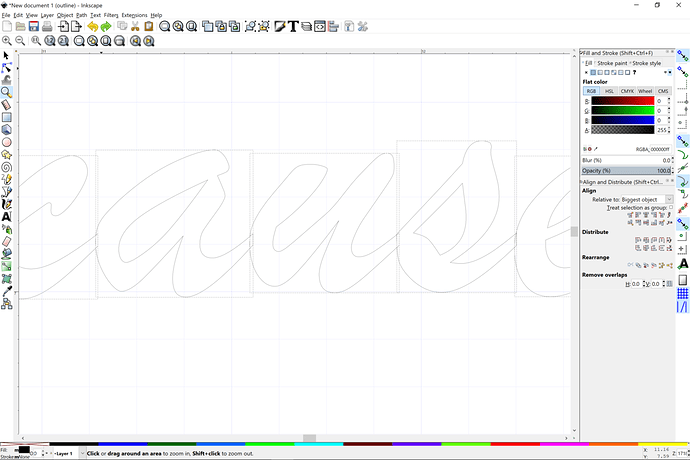 After you convert to path and then you break it apart, then use the union command and that will join without overlap. 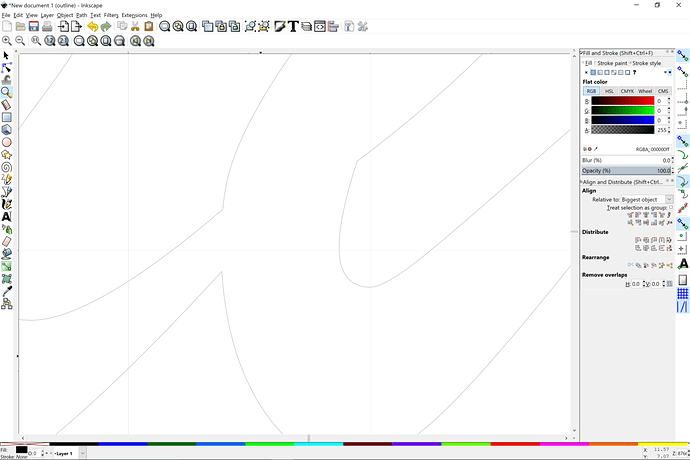 That happens in CorelDRAW as well when you convert text to a path/curve. Affinity probably does it too but I have not actually used that app much to know.

God I love this place.
Thank you gentlemen!

That looks fantastic! Can’t wait to try variations on this idea.

So, I’ve been building more texture patterns tonight, should have some squared away and available to use throughout the weekend.

Engrave a deep texture, then flood it with acrylic solvent and give it a little time to do its magic (just a minute or two). The solvent will smooth some of the finer engraving lines and make it look less frosted, restoring some of the clarity for an interesting effect! This method worked so much better than trying to flame/heat polish an engraving.

Great idea!
I was playing with defocus to see about smoothing the engrave.

Do you have a recommended acrylic solvent? I tried it with acetone and it didn’t do much.

I used Sci-Grip #3, same stuff I use for bonding acrylic together. I did maybe 5 or 6 floods on this to see how far it could go, literally filled it completely then let the solvent evaporate on its own before the next flood.

Here’s a photo now that it’s had good time for the solvent to flash and acrylic to setup nice and solid again. If you download it so you can get the full resolution you can really see how smooth it is.

This particular piece was a test sample for the roadster engraving. I originally engraved this a few weeks ago but the textured area in the corner I designed and lasered last night, so that was added way after the fact. It gives a good comparison between the solvent smoothed engrave and a lighter Floyd Steinberg engraving. 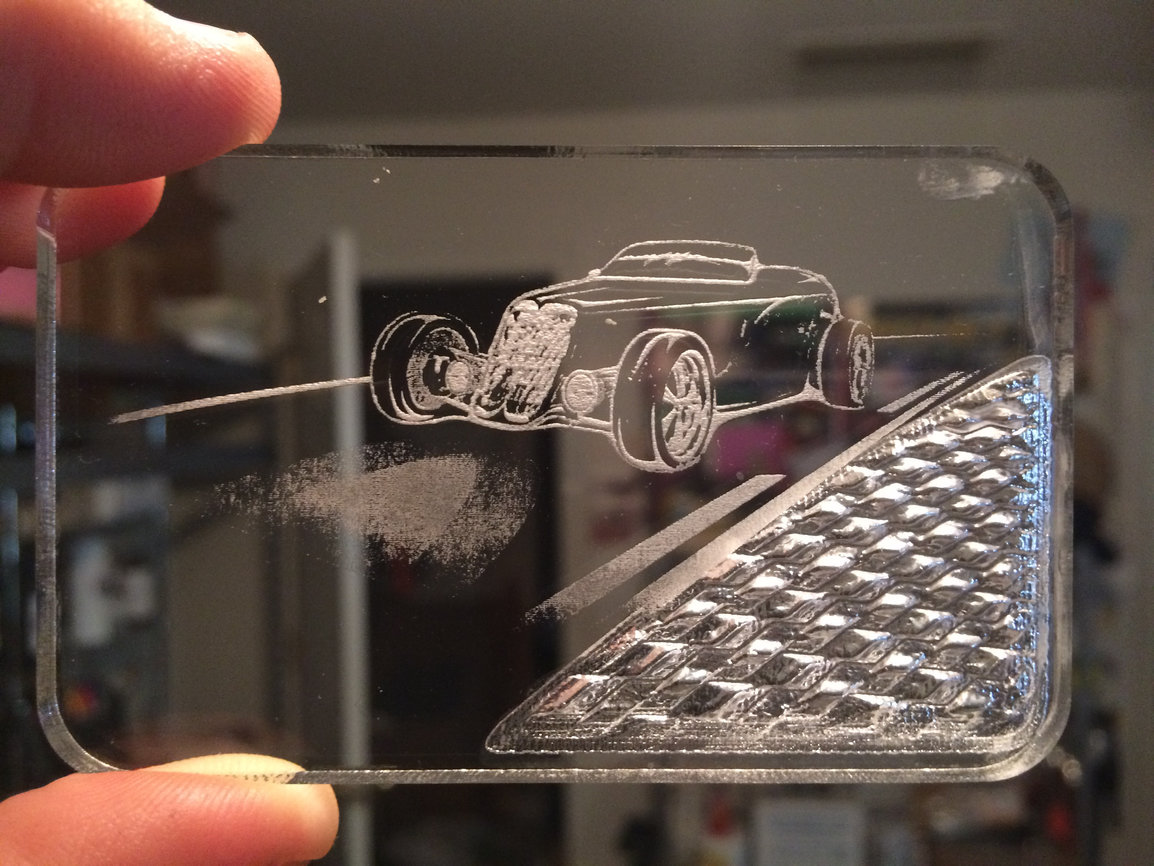 I think this is my favorite so far - love the smoothed effect of the engraves!