How to insert a file to cut

I am wondering what I need to save my PDF as in order to cut it out and not just engrave it. I tried a .png and .pdf. I can only get them to engrave…not cut

Does your PDF have vectors in it? You can only engrave bitmaps. You would have to have some type of drawing program to make the lines or some feature of your PDF make to make cut lines.

What program are you using to make the PDFs?

You can directly import bitmaps like PNGs and JPEGS directly by adding artwork. Then you would need to add some vector cut files that usually are SVGs.

Have you done the First Three Prints tutorial to get this basic distinction understood?

Here is a palette of common shapes you can use for cutting.

Right click on this file and Save As. You can then add it as artwork to any screen and choose the shape and resize the shape as needed. It will get you started.

I did do those 1st 3 prints and I understand all that what my student is to do is add a hellcat logo onto a square. He wants both the hellcat cut out so he can put leds behind it. He found a logo…exported as both a .png and .pdf…both of those will not let me cut them out. I looked a little more and it looks like I might need to go into photoshop or something

You will need a vector to cut, and unfortunately it sounds like you only have rasters.
PDF is a container file; it can hold both vectors and rasters. It does not convert a raster to a vector just by saving it in PDF format. You will have to vectorize the PNG in some way.

If you already have Photoshop, you may also have Adobe Illustrator, which has a function called Image Trace that will help you do what you want… although some tutorials may be required, and sometimes the automatic functions don’t have quite the desired result.

Adobe Capture is a mobile companion app that has a quick vector function called Shapes, which could work also.

If you don’t have illustrator, Inkscape is free and has a similar set of features.

This thread has an awkward/too-fast video I made on the subject, and a link to a more detailed tutorial as well: Just Illustrator / Quick Vector Outline for cutting

As @jbv noted, Inkscape is free and is relatively easy to use to get an SVG file for cutting.

I’ve converted a lot of jpeg/png files to cut–you IMPORT that into your opened Inkscape file, then PATH>Object to Path then PATH>Trace Bitmap.

Usually I do “edge detection” and set to 2 traces, and click box for “live preview”. (You can google info on the different choices and what they do). Once the trace is done, it’s overlaid over the image, so drag it off. Select the trace, pick the edit Nodes feature, then click the item & you’ll see all the nodes appear, and if there are 2 lines and any fill between the lines, open the Fill and Stroke side bar, turn off the Fill, and turn ON the stroke & select a color (red is easiest to remember as for cutting) and the stroke width–wide enough to see it well (I like 0.3mm), but if it gets too wide, the GF may assign it as a score or engrave rather than a cut.

And then delete the nodes for the parts of the image you don’t want to maintain. Once you do it a couple times, it’s almost faster than trying to explain it!

There may be a different way, but this is what I know works!

if it gets too wide, the GF may assign it as a score or engrave rather than a cut.

That is not correct. It doesn’t matter how wide a stroke is, it will still show up as a path and can be assigned a cut or score in the UI. The SVG with a 5mm stroke on the right shows up the same as the other 0.2pt stroke objects in the GF UI. It ignores the “stroke width” parameter.

I have Inkscape so I will try that. Thanks so much

I have Inkscape so I will try that. I will watch the video as well. Thanks so much

So…we got the outline to cut using Inkscape but there are spots that we need to within the eye that we are trying to add a line so the eye stays there. I added a screenshot to show what I mean. I added white rectangles and then red lines to show where I want to cut. I thought if I “grouped” them together it would cut the red and leave the white but that didn’t work.

Also where the red line is it cuts 2 lines (one on the outside edge and one on the inside edge). Is there a way to fix that? 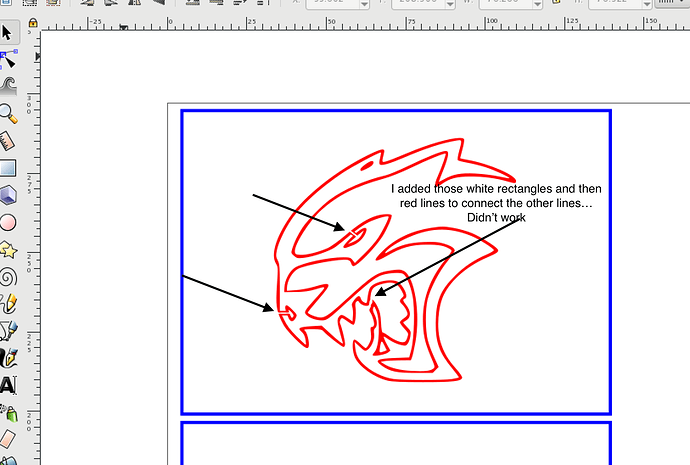 Thanks for all your help so far.

To the bridges… I think they are probably just too small. Thicken the white part up a bit and it should work. As to the other, I don’t use inkscape and am not sure how to remedy that issue but it could just be the thickness of the stroke.

You need to actually edit the path, not just overlay rectangles and lines. Use “edit nodes”. You probably need a combination of adding nodes, breaking nodes, and combining nodes to do what you want.

The trace also likely returned the inner and outer borders, so that’s why you have 2 lines. I believe the Inkscape beta includes a “centerline trace” option, which would return only one line. Otherwise, you have to go in to the edit nodes mode and delete the extra set of paths.

It looks like you’ve gotten some wonderful guidance from the community! Did these suggestions help get your file cut out the way you want it? If not, let us know and we’ll be happy to help.

I can’t find the centerline trace option on Inkscape. I am also struggling to edit the nodes.

I’m sorry to hear you hit a snag while helping your student with their design in Inkscape. The centerline trace option which others have mentioned is only available with an add-on to the program, but there might be other options you can try.

A great resource on the forum is our Community Glowforge Tutorials: Table of Contents. On that page, you can find a link to the 2D Software Matrix. This would be an excellent place for you and your student to look for help with a variety of topics.

Based on what you’ve described so far, these post from other community members in particular might be helpful:
A method to create offset outline around a bitmap using Inkscape
Breaking up a large design (Inkscape)

Will these help you get closer to your goal?