I’ve been working on a design for a Mastermind game / box. Version 1.3 of the SVG has been shipped to my brother @timjedwards for prototyping fun with his kids and our nieces/nephew when they visit him today, and since he’s usually 'way better with this kind of stuff than I am, I’m anticipating there may be some cool upgrades…but I thought I’d give you a little preview in the meantime. (Because yes, the design will be posted in Free Designs when it’s ready for public consumption!)

I decided to build the game onto the top of a box, the sort that slips down over its bottom half (there’s probably a name for those, but I on’t know what it is), and then I worried about all the pieces spilling if someone picked up the box and the bottom fell out, so I had to think up a way to latch it shut when not in use. Google was no help at all, and even Pinterest failed me this time, but night before last when I was supposed to be sleeping my brain suddenly spat out a fully-formed design, which made it even harder to go to sleep since then I wanted to try it out immediately. (And then I had to get up and go to work with it stewing in the back of my head all day wanting to get out!)

It took a little time, because 1) I’ve been using this project to learn Affinity Designer and 2) I had no clue how to design rack and pinion gears (or any other sort, actually!) It turns out that the online gear template generator has a rack & pinion option built right in, yay!

Anyway, here’s a photo of the locking mechanism, prototyped in PG draftboard. The gear mechanism is sandwiched in the bottom of the box, with a hole cut for access to the finger holes. Twisting the gear sends a tab through slots in the box bottom and top at each end, locking them together. I’m pretty proud of it – and also pretty happy with Affinity’s cog feature and corner-rounding tool, both of which were a huge help on this project! 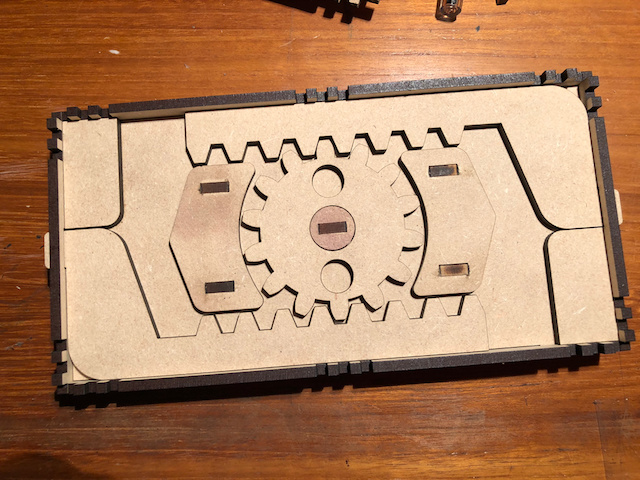 With box bottom in place: 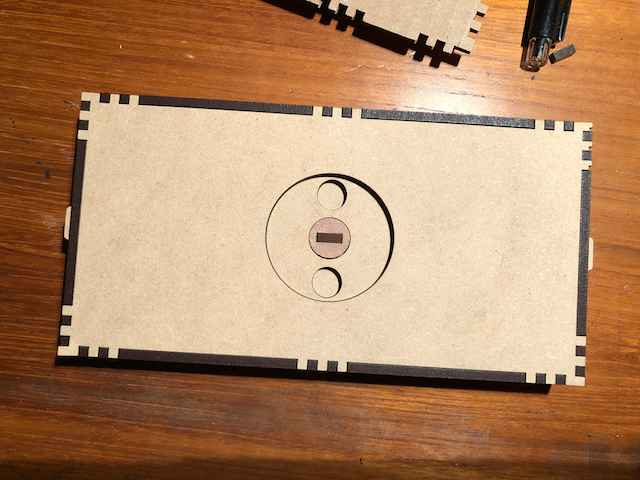 Good solution.
I like the finger joint pattern becoming a decorative element in the design. It seems several photos are beginning to show that trend, so it looks like a GF style is appearing.
Reminds me of Charles Rene Mackintosh designs, top of my list !

This is my first from-scratch box design; Kerf confusion has defeated all my previous attempts and I’ve defaulted to using box generators instead.

This time I approached the problem slightly differently; I started with the outside rectangle and added slots, instead of using the standard “add tabs to a rectangle” approach I’ve mostly seen people use. Somehow it helped me finally wrap my brain around what I was doing, and I got perfect press-fit (once I added a few forgotten slots) on my prototype!

I, too, use my own method of generating finger joints in inkscape. I’m using them on non-rectangular surfaces, so my technique is to lay out a set of rectangles, duplicate them, then add one set to one piece, then increase the size of the other set by the kerf adjustment, and subtract them from the second piece.
Hope that makes sense.
John

This looks so cool! And I agree, the tabs-as-decoration look great.

Amazing! And just what I’ve come to expect from you. Would be fun to see it animated in a gif.

my brain suddenly spat out a fully-formed design

I love when that happens, but I usually have to write it down.

This is lovely. I use Affinity, too…and it tickles me to pieces when I find a feature that I had previously not seen and then figure out how to use it. Working with kerf has so far not been a priority for me, but it’s on my list of to-do’s…just because I want to know how to do it.

What a sweet idea!

Super cool. Might be cool to use clear acrylic on the top so you can see the gears.

And I agree with the other posters: the finger joints as a design element is definitely the way to go.

Also, now I want to check out Affinity. I’m getting better at Inkscape, but it’s good to have an alternative, especially since Inkscape’s Mac support feels like it’s on shaky ground.

I’m getting better at Inkscape, but it’s good to have an alternative

Yeah, I was conflicted about learning yet another new program, not to mention actually having to pay (cheapskate!) for it, but was swayed by 1) the ability to do vector and raster in one place and 2) being able to use the native Mac hand gestures that have become so second nature.

Affinity has some cool perks, too, like if you duplicate something and move or size it, then duplicate again, it applies the same changes to the next duplicate – so making a series of things (think finger joints!) is a breeze. There are a bunch more shapes you can create and tweak (including cogs) than Inkscape has. You can fit text to any curve, not just circles. There are still some path operations I can do in Inkscape that I haven’t figured out how to do in Affinity, like the “stroke to path” thing. And I’m still working out how to reliably export without screwing up scale. But I’m getting there!

Oh, and I haven’t played with it much yet, but the iPad version’s touch controls really appeal to me. I’m 'way too cheap to buy an Apple pencil (do they stuff those things with diamond dust, or WHAT?) but I cut the thumb and forefinger out of an old cotton glove (so my hand can rest on the screen) and played around with using a stylus to draw curves, and wow!

I surely agree with the iPad’s touch abilities, but the pencil is worth every dime. If you get the opportunity to try one, I think you would be amazed at the tactile response.

I’m SOOOO reluctant to spend $100 on things that I’m probably going to misplace the first week I have them! Maybe when they add Apple pencils to the “Find my iPhone” app… (Seriously, my primary reason for owning an Apple watch is that it straps to me so I can’t lose it, and that gives me a reliable way to find my phone and iPad when I lose them, which happens like 87 times per day…)

I get it! I seldom lose anything, so that’s not usually my issue. I have different issues.

Thanks for suggesting Affinity Designer. I’ve become nearly competent in Inkscape but I’m a Mac user, too, and rewiring my fingers from the Command key to the Control key is maddening. After a session with Inkscape I fumble with my other Mac apps and I often shortcut into surprising and inappropriate tools in Inkscape.

So very much this!!!