Text not engraving even though laser head is moving

Howdy y’all, so I have this file that I’ve been trying to cut and engrave. it cuts and engraves everything but the text. does anyone know why? The laser head even moves like its engraving but it doesn’t etch anything.

** svg file was made with cuttle** 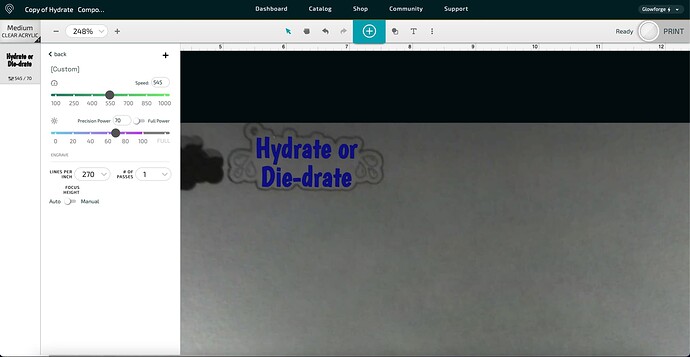 In-general, text is invisible to the GF interface. I don’t know what “cuttle” is but in a real design app, you have to convert text to paths to be able to cut or engrave it.

Cuttle is a web based platform for creating and editing svg files. I’ve made many other projects like this but they have never given me any problems like this. They are all the same. Words with an emoji. Nothing crazy but just this file is giving me issues.

If you want to share the file, one of us that uses a real design app could take a look and see if there is some issue. As stated, text generally needs to be converted to a path. No idea what “cuttle” uses.

I just created a test text page on Cuttle and it engraved no issue. Are you sure you haven’t duplicated and stacked it?

Cuttle - New web app for laser cutting design Everything Else

Cuttle — the web-based laser cutting design tool I’ve been building over the past year — is now open for sign ups! 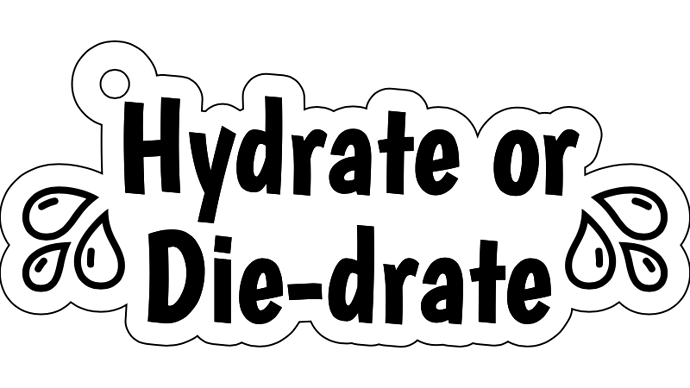 A Cuttle project by @jgarza1610

This is the file. Please let me know my errors!

Nothing obvious here. Prints just fine. Try a different browser? I use Chrome, on Mac.

I think I might have figured it out. In real design apps, you can set stroke and fill, for an engrave you generally want the fill to be solid black, although I mostly use vector engraves so it doesn’t matter. I had opened your file in Inkscape before engraving. When I ran it again as you had uploaded, it barely marked the surface. Whatever “color” or shade “cuttle” is using may show up on your screen, but it’s barely enough to mark the surface with the laser.

I exported your design to SVG and opened it in Inkscape. After a bunch of ungrouping, I found that you have two copies of the engraving overlapping each other in the design.

Overlapping engrave areas are treated as a “do nothing” operation by Glowforge, so it goes through the motions but doesn’t engrave those parts. Removing one of the copies should fix your problem.

The emojis are not duplicated, but the text is. Delete the top layer and you are good to go. 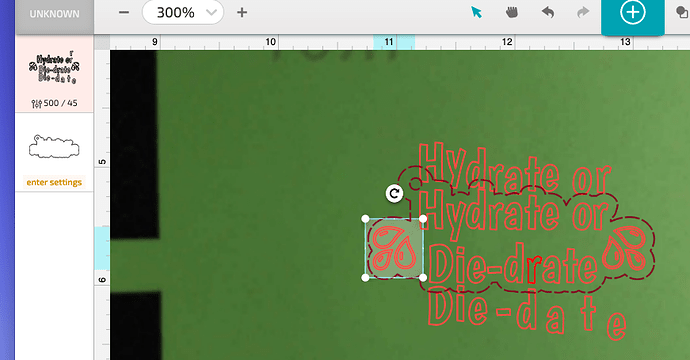 Please stop being dismissive - @dklgood explained already, it is as much a design app as Inkscape that you favor so much.

Overlapping engrave areas are treated as a “do nothing” operation

It’s news to me that overlapping engrave areas are treated as do-nothing in Glowforge. I can understand why that might be the case, for technical reasons, though it’s pretty confusing that Glowforge displays the text in the preview as if it were going to engrave.

The solution, as @dklgood and @dan84 point out, is to delete the duplicated text. I recorded a short video showing where to do this in Cuttle if you want to fix your design there.

text generally needs to be converted to a path

This is true in other vector graphics apps but in Cuttle you don’t need to convert Text to paths. Since we’re building Cuttle specifically for the lasercutting workflow, we automatically do this whenever you export or whenever you copy and paste into Glowforge’s app.

It’s news to me that overlapping engrave areas are treated as do-nothing in Glowforge. I can understand why that might be the case, for technical reasons,

Definitely a long-running “bug” as far as I’m concerned. They use XOR for determining whether to actually engrave… But not for display purposes. Annoying at the very least and a serious pain in the ass to newbies that don’t know it’s happening.

The lighter shade may have been from the overlapping parts.