Can't cut a tracing. Won't let me change from engrave

Just got my Glowforge. I have been playing around with it a bit and just ran into not being able to change a tracing from engrave to cut. Is this normal? Am I missing something?

It’s giving me the “Bitmaps can only be engraved” error.

Do I have to scan on a different device and convert to a vector or something? And then upload?

Bitmaps will only engrave. Get to know Inkscape and look at the numerous tutorials on this forum for design assistance. Welcome to the Magical World of Glowforge.

This forum is unlike any other … a wonderful collection of ideas … helpers … enthusiasts … entrepreneurs … and so on! Spend some time looking around. Brian

Welcome to the forum!

“Bitmaps can only be engraved”

This behavior is correct, so you’ll need to add your own cutline around the artwork using a vector editor such as Illustrator or Inkscape.

You might find the first link in “the Matrix” helpful…

The best place to start is “Designing for the Laser”

EDIT: If you’re working with the GF scan/trace function, it might be helpful to review the tutorial, especially steps 7-9.

Thanks guys. I was afraid of that. I was hoping to be able to cut out Illustrator for simple quick stuff.

It would be nice if you could export from the Glowforge interface. It would eliminate having to walk to my scanner and hassle with it.

It would be nice if you could export from the Glowforge interface.

It’s been requested numerous times and is in the “hopper” (backlog) to be potentially implemented at a later date.

I only ever used the trace feature once, and I’m not near my Glowforge, but I thought that the trace gives you both an engrave step and cut lines, depending on where you click. Can’t you then turn off the engrave and just cut it out? I may be misremembering how the interface for that works.

Edit: I’m not crazy, this is a thing 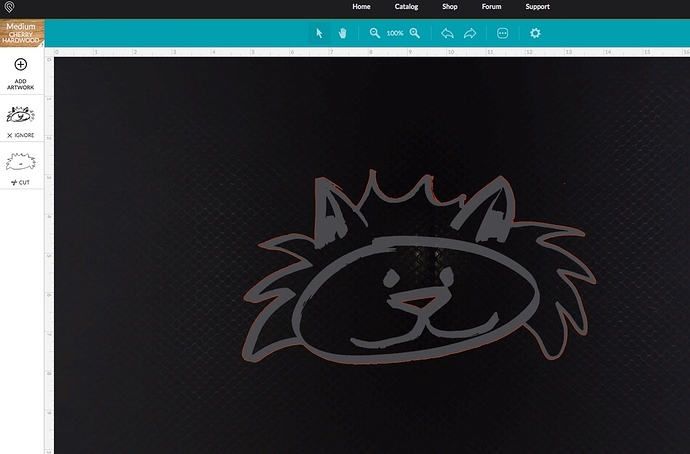 From what I remember, this original video did show it. Guess it got dropped. Kind of a downer.

It would also be nice if they would take after Inventables and have simple drawing capability like Easel.

I don’t think it was dropped, see my edit above. Is it possible you just didn’t select the area around your drawing to cut out?

Tried everything. No luck.

It always refers to bitmaps can only be engraved.

I would go through this tutorial again: https://glowforge.com/support/topic/first-three-prints/2nd-print-trace and especially steps 8 and 9. When you do the trace, you need to designate what to cut out (usually by clicking on the white area outside of your design).

I don’t think you can change anything once the trace has been completed, so if you don’t have a cut step now, you’ll need to start over. But you should end up with something like in my picture above: IIRC, we clicked outside the lion, and we clicked inside his nose, which created those two red profiles. I imagine if we hadn’t done that step and just went to place artwork, there would only be a bitmap and no cut, and it would behave like you’re describing. I think you skipped a step in your tracing.

Okay, I had to do a trace to see who was losing their minds. It cuts, just has to do everything in order including clicking outside your design when prompted.

@chris1 has it right.

During the trace process you have to click on the border of the object for it to generate a cut line. It will show up pink in that screen. This is DURING the trace process, not after once you are back in the bed view

(I pulled this off google images)
https://community.glowforge.com/uploads/short-url/5f3cLcoBgcTQewtB7fBLOUadOrS.png

You can have a trace do a cut and an engrave if you use the outer boundaries the whole image, like a square or rectangle and designate that as a cut. Or you can designate the inside, center or outside of any line or shape as a cut.

For what’s its worth, here is a video I did exploring the tracing feature. It’s the origin of the above posted cat-pig when I was trying to figure it out.

Prerelease Trace Test on Cardstock Made on a Glowforge

Continuing the discussion from No Foolin': and also this excellent topic: We have had many discussions about the accuracy of this function. Here is an example of the different steps. I also show the use of masking on a paper product, .012" cardstock (thanks again @cynd11!). I also show why I do not use this function much as you can see from the hand drawn cat/pig that is the subject. [image] Cat/pig drawn directly on Laserbits masking with a fine point Sharpie. The masking is applied on…

Thanks for all of the help folks!! I got it working with the instructions you all posted.

I’m not actually contributing any more to this thread, I’m just trying to
help test a potential Discourse bug.

(I pulled this off google images)

Dude, I don’t to call you out or anything, but I’m assuming you added this disclaimer becasue that’s one fugly cat(?) drawing LOL

That would be my cat pig and I am sorry to have inflicted this on the world.