I love this Catan board, the project that sold me on the Glowforge, and the awesome thing is that Glowforge has uploaded it and shared it for free!

I’m wondering if there are any other “Glowforge Official” designs that have been uploaded for free at this time. Could be cool to collect all the links in one place, if so.

So what do the different colors represent? Red = a cut line but are the different shades of brown different depths? How will the Glowforge software differentiate between cut, etch, engrave and the depth of engraving?

We will set you up with some defaults, like red=cut and grey = engrave 50%, that will automatically import correctly. You can then override those, or use nonstandard colors and assign them. We’re still figuring out what the right design language is for this. I’m copying my cofounder @Tony on this, who’s the person working on it. Maybe he can float some of our design proposals here for feedback when they’re ready.

As far as Glowforge designs - Settlers was a one-off because of some crazy circumstances surrounding it (front page of reddit, deal with Mayfair games). We’re not planning on releasing more free patterns right now. Tell me if you think that’s wrong, though, we’re always open to listening.

To be honest, I always sort of assumed you’d be doing a few official designs. I mean, I don’t need it, and I’m sure a lot of people don’t. But it’s always nice to see some examples - like your Catan board, maybe that votive candle holder, etc. Or, you know, hire people from the community to create official instructions / tutorials after launch.

Totally agree it would be great to have some free designs to cut out of the box so you can test/showoff your sparkling new Glowforge.

It has been mentioned that as the launch draws nearer they will allow user submission to the “catalog”. Its vaguely addressed in the video that it will be a place for some approved free designs and a place to sell premium designs – at least I think. And I think they are taking suggestions so jump in on the conversation.

I’d love to see more free designs, maybe released on a monthly or quarterly basis? It could be a way to bring attention to someone just starting out who you think could use the exposure, or a small piece from a designer in the catalog who is mostly known for doing larger projects, to give people a sample of their design quality, or even to allow users an easy way to learn about new features of their Glowforge as improvements are made.

I’d love more free designs to have stuff to play with. I could really go for a snap-together project. A little box or something like that votive candle holder (I think we’d all love that candle holder!)

Another idea would be a template to play with. Take the candle holder, for example. It would be fun to get the basic outline for the pieces and then be able to customize the decorative portion of the design. Little things to get our feet wet while we’re learning to operate the GF.

Fun fact… I designed the interlocking pieces of the votive on a whim in about 20 minutes. Tony made 4 different faces which probably took an hour. It cut perfectly on the first try. Even though it’s 10 pieces and 2 materials, it’s a really easy project!

See, that’s one of the things that has me really excited. The only laser I have any experience with is the laser pointer I use to tease my cats. The fact that this machine is geared towards noobs as well as more experienced people is really great.

@dan Id be happy just having the designs for the laptops as shown on the intro video for the GF. people can use them as templates and add their own name as opposed to having to start from scratch designing their own.

Personally I think you’re missing a trick not having a MakerBot style “Thingiverse” website for designs to be shared. It’d open up the community more and enhance your product.

A few tutorials would be GREAT, as I am new to the laser industry. @dan

I thought I saw on… possibly a Tested video… that the maker of the Catan Board drew the designs freehand, did the Glowforge scan and create this design parts of the file then, or was this made afterwards? (… or perhaps I misheard in the video.)

Catalog suggestion: Silhouette for their cameo offer “design of the week” for free in their catalog, either made by their designers or featured designers on their site who are happy to give away a small design for free. You could try something like that which can highlight smaller makers and also gives people the option of a limited free design to download. I do also like the idea of creating a file and uploading it for someone else to spend a euro on and then they can create with their own Forge.

You heard it right–the Catan board was drawn. He emphasized that no design software was used. But, looking at the template they’ve released, it seems they’ve either recreated the designs or used the file GF Cloud created from what the camera saw. (Too bad it doesn’t include the cool border tiles shown in the promo!!) http://glowforge.com/wp-content/uploads/2015/09/game-board.pdf

Iirc there were some rights issues with the ones that went viral, so they drew these up explicitly to give away.

Exactly right. And drawn. Happen to have the sheep at my desk… 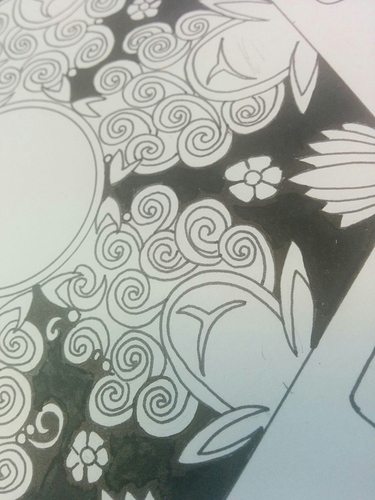 Those border tiles she drew up are so choice. I’m really hoping that someone (with more artistic skill than me) draws up some similar ones and puts them on the catalog.

I think that because I am going to have to wait to between June and September 2016, and I have paid for my Glowforge upfront, I should have access to any new patterns and materials for learning this machine so when it gets here I am ready to role. I think other people should have access to all information relevant to designing and fabricating using Glowforge technology. This enable designers like myself to create designs that are ready for fabrication when we get our Glowforge. It also enables the company to offer more for the buck in the way of accessing designs for those utilizing the technology. You can offer designers a forum to sell designs or offer commission to all designers whose work is reviewed and approved. This is a win, win situation for your company because you are creating other streams of income based on your product, and you are getting more ideas from designers who utilize the technology. The more you offer in the way of using this product the more it becomes a desired item and demand increases.

Having the catalog of materials and designs available even before all units are shipped would be a great thing. Most of the energy in the forum has been about getting the actual hardware shipped and ensuring that the user interface is ready to go. I haven’t noticed too much information about priorities, schedules and capability regarding the catalog. There are a few threads. Not much in the Q&A from 11/20. This post:

We’ll ship it on the material. We’re still deciding on the final material we want to use. Noted that you want to buy it separately - will put that in the idea hopper. Mike, expect updates on the catalog much later down the road; our focus right now is on getting basic functionality rock solid.

is from October 22. I have been doing a lot of research on materials, designing, and laser use to help me temper my anticipation and expectations around getting a Glowforge. I’d really like to have some materials and designs that I can just use right away. But, I see nothing that promises a working catalog concurrent with the shipping. The promise of cloud computing that is built into the price of the introductory offer seems to be for operating the forge and not design. There is uncertainty about this. I have no doubt that the catalog will rock. @dan’s comments about sourcing bespoke plywood tells me that they are definitely working on it. When will it go live, that’s not clear. I have thought about the catalog being a revenue stream, and wonder how much that was pitched to initial investors. But it doesn’t seem to me to be a core focus of the business, unlike the inkjet printer business model.

I’m curious if you have a pencil drawing that is several different shades of grey could there be a setting that automatically engraved deeper based on light and dark intensity? A lot of my drawings are so detailed it would take a long time to assign areas with separate depth values.