Our business has a store in a mall setting and we would like to take our forge there. There is no way to vent outside so the quick obvious answer is to use our portable Glowforge filter (we use it normally only in the winter). As anyone who has one knows they are very loud. I don’t want to deter customers or upset other vendors running that al day.

When I originally thought about moving the glowforge to our store, we thought about building a soundproof little room. That takes a lot of space and money we don’t really have. I remembered though that with the portable filter fan being in the box, the noise should be much easier to contain, I wouldn’t need to build a whole room, just for the filter itself.

What do you think about me building a a big box out of wood with maybe some egg crate foam inside around the box that simply slides over the top? It could be easily removed to change the extra hepa filters I put on the top. Seems like it would work, but do you think I would have to worry about heat and/or issues with venting?

Fundamentally you would have to let air out of any soundproof box, so venting and heat management would be part of the design. You obviously can’t put a sealed box around the whole thing, you have to let the filtered air out.

Some people have made sound diffusing systems for the Glowforge, they tend to be for the unit and not the filter. Let’s see.

Here’s a muffler idea from @jbmanning5:

Is this thing even on? Beyond the Manual

I’ve never been too heavily concerned with the noise of the Glowforge, inside or outside. It’s about like a vacuum inside and I’m on 6 acres, so exterior noise isn’t much of an issue. However, an upcoming adventure may necessitate my paying attention to how much noise I’m making. I picked up a 4” muffler/duct silencer to see what would happen. VIVOSUN 4 Inch Noise Reducer Silencer for Inline Duct Fan https://www.amazon.com/dp/B01CTM0H1S/ref=cm_sw_r_cp_api_GfGBBbX611CQJ It’s not without some p…

Workspace ~ your suggestions? Everything Else

Yes and no. The noise benefit is because you also go into the UI and tell it you have a filter (you don’t). That tells the Glowforge that you don’t need to run the internal exhaust fan, which is where most of your noise comes from. Your external fan pulls the air out and they tend to be much quieter. So yes, the noise will probably be majorly reduced if you turn that setting on and use your external fan to pull out the fumes, but if you forget to turn that fan off, it’s still noisy like a h…

Then there was this table from @takitus:

And this beast of a project by @callumcculloch:

Oh lastly are you turning the main Glowforge fan off when you use the filter? It can help with noise.

Yeah I make sure to check the box in the app itself. I love the great fan setups people have for the forge itself, but by using the filter, it seems little more unique of a problem.

What if I had cut slots out where the filter vents are to allow that “breathing room?” I know noise can escape that, but I would think if the rest of the box has the egg crate foam, it would help disperse most of the noise.

The sound is generally loudest at the air outflow with stuff like this, so with a muffler you generally make a less direct path for the exiting air so that the sound has to bounce around more inside the muffler and gets diffused/absorbed. I might make the box oversized by a couple of inches on each side (lots of room for the air to flow through, you don’t want to block its flow) and then put the vents on the top. The air would have to move up and out the top and the sound would get gobbled up by the egg crate.

You could prototype this with a cardboard box and get an idea of if it’s worth your time to make something more permanent…? A nice big box, a pair of scissors, some foam, and some tape and you could at least see if it works in theory.

Yeah my original thought was something like this. Obliviously not so tight, 3 inches maybe all around. 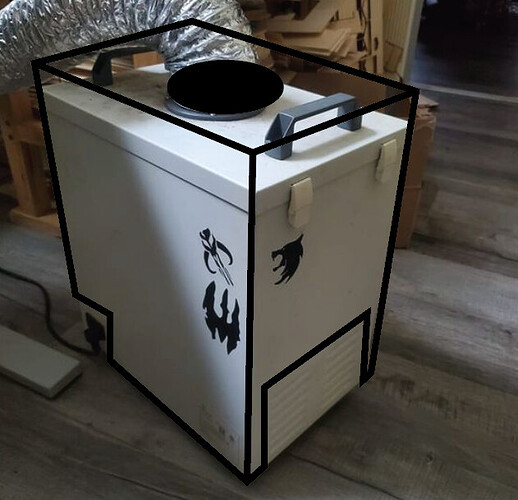 Yeah, that’s the idea…. Or at least 3” away from the vent side. I don’t have a filter so I don’t know the exact layout of the thing.

i might consider adding a muffler to the hose as well. sound will escape back up through that as well.

but any kind of box, even if you leave the proper holes for air flow, will help mute the sound. the question becomes whether you can muffle it enough for your situation to justify the cost/time to build it.

random side thought. you talked about building a small room for the whole setup. what if you built a soundproof little room just for the filter into a corner where you have the GF and just ran the hose through that wall? or built a very large soundproof box that fit under the table, that was the equivalent of that little room? something with plenty of airflow around it. could even potentially add some quiet fans on opposite ends to move air through it, if that helped. it’s really the same thing you’re considering, but build it bigger. maybe it’s even just building the “table” the GF sits on that is more of a soundproof cabinet that holds the filter.

built a very large soundproof box that fit under the table,

What if the soundproof box WAS the table? Like a self contained GF station.
Like one of these with filter on one side and supplies and tools on the other?

Glowforge and 3D printer Custom Cabinet Everything Else

Hi All! I’ve had my forge for about 2 months but havnt been able to make anything. Apart from the gift of a good measure when it arrived to check it was working as I have been waiting to get a venting system working. I also wanted to make a custom cabinet to maximise space efficiency in my small room for the forge and my two Prusa 3D printers (Highly recommend to anyone looking to get a 3D printer) Anyway I’ve been reading lots of the posts on here and finding them very helpful and wanted to p…

Glowforge Cabinet Everything Else

This is my first post since I received our Glowforge a couple months ago. I am so excited to share this fully contained Glowforge cabinet my husband made me! It is exactly what I needed to keep my grandson’s curious hands away. It also provides great storage for all my materials. He created it with casters for easy cleaning and the Glowforge can vent directly out of the back of the cabinet through the window. Since the only spot we could find to put the Glowforge was in our front entry room, whe…

What if the soundproof box WAS the table?

i hit on that later in the post, i agree. build the box as a table. added value of it looking like it belongs as part of the store installation and not some box with a hose into it.

Not sure if this is helpful and may make it more complicated to change the filter, but would not a box in a box in a box sort of design be helpful here? The most sound proof in the middle with that vented to the next outer box then next outer box then into the room. Each box could stil have more foam or thick styrofoam insulation. It may need to be a bit larger but could work. I suppose the other thing to consider would be a different filter system. If you have money to build a sound proof room, could that not be invested in a better engineered filter system? I know it is all expensive! I don’t know the specs of the GF system, but there maybe retail laser filter systems that don’t have this problem. Maybe there is one that can be used or jiggered to work with the GF.

I have had some actual experience with the issue as the company I was working for at the time had people working in a tiny room with the largest size shopvac available in the room with them, and even alone in the room, with no other sound, you could not hear the shopvac.

It was made of half-inch ply but the soundproofing was the stuff sold for fancy power yachts as the owners would never put up with roaring engines for hours on end.

As for the intake they used a 4" PVC pipe as the sound would not be traveling outside it, and the exhaust was like a labyrinth with many turns and a thick rug on the floor.

You could even decorate the outside and nobody would know it was a filter, and they would not hear it even if they tried.