As a huge lover of laser cutting, I was very unhappy how most existing box generation tools are producing ugly and asymmetric notches that (to me) just look horrible.

About a year ago I made an open source ruby library, and incorporated it into a website – http://makeabox.io that’s been live ever since, and is now generating over 100 boxes per day, and growing.

I invite you to generate your boxes there, and submit any feature requests in the comments section, or on github.

Cheers, brother. I’ve used your site before; thanks for making it!

It is working for me right now, but my first several attempts all got me a “whoops: infinity” message.

I got the same thing the first time. I had clicked in the “Tabs” box, but left the value blank thinking that this would set the tabs to the default value of 3X the Thickness. Manually changed the Tabs to the 3 X value and it worked. Might be that default values only remain if there has been no change at all in the field.(?)

@kigster Thanks for the tool! Very easy to use.

Wow. Thanks @kigster for posting and joining the forum. Excellent work.

Thank you for creating this website. I just tried it out and it looks great.

Thank you for creating and sharing this!

Can someone post a pic of the difference between this and what would normally be generated? I played around with the site, but I’m not understanding what’s turning out symmetrical or how it would normally turn out.

So far my best alternative joint plan is to just mitre joint any boxes I want to make (inelegant, not very sturdy, and extra work, but pretty) or maybe some sort of lasery rabbet/dado joint (perhaps a better idea). But everything I see is those tabs, so perhaps alternatives aren’t feasible…

I’m a noob to these things & lasers, but one possibility is to adjust the tab size to the thickness of the material you are using, that way you would end up with a nice finger joint. You would just have to edit the top & bottom edges, in your favorite program, so that there are no tabs, then you could make a groove or rabbet for the top & bottom pieces for a closed box.

My understanding, is that a lot of these generators don’t space the tabs evenly, which is the symmetry being referred to…

Thank you for posting this. I have been using Makercase lately, but I will give this a shot tonight. I do suggest making a version with a slide out top and no top notch’s if possible. Let the laser cut the grooves for the top. I currently have to use the router to achieve this.

I’m getting a 503 Backend Read Error when I try to generate the PDF.

Most of the laser cut boxes you see use “box joints” because they are easy, and because there a bunch of online box generators (like the excellent one in this thread). There are other options but they get more complicated.
Check out this list, some are laser appropriate, some are not.
http://makezine.com/2012/04/13/cnc-panel-joinery-notebook/

It seems to me that it might be a nice look to just make the tabs a tiny bit longer than the stock thickness, and then after assembly, sand them down flush to take off the black carbon. That would make it look a lot less laserish, and if you minimize the extra length, wouldn’t be that hard to do. There may still be a visible hairline of black outlining each tab, but it might look quite striking with that black hairline separating the end grain from the face grain on every joint. If this is as valid a workflow as it seems to me, it might make sense to add a way to automate that in the tool, by adding a tiny bit of extra length to the tabs when this option is selected. It might be a bit tedious to manually stretch them all in the pdf.

Great idea. I generally don’t mind the way the edges look, but options are always nice.

See the following image – despite this still being a notched design, the notches are symmetric: 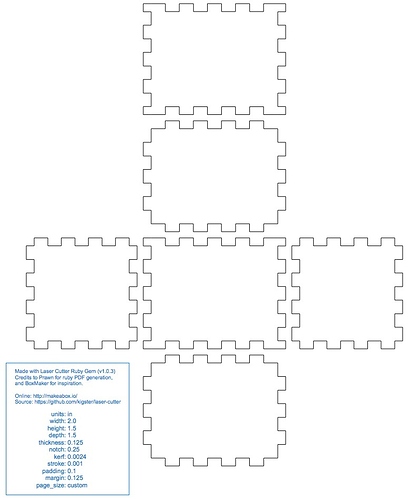 One advantage of symmetric notches, is that you can use either side of your material for the inside or outside. When notches are asymmetric, you only have one choice, and it’s more brittle/difficult to align them together.

This happens when the parameters you specified take too long to generate a box. Typically, this happens when you choose a very small notch length, as compared to your sides.

I would recommend leaving notch empty and generating box without specifying notch.

Thanks for creating this. Bookmarked!

I opened one of the box files that i made in AI.
It looked good.
I found that each piece of the box was made up of line segments, but the line segments were not joined as a shape.
Using the selection tool, i dragged a bounding-box around each piece (individually) and used the Join command (command-J on a mac) to make each piece a solid object, to which i could apply a fill-color. That made it easy for me to manipulate it further.

The checkbox on the form really ought to be a check box, the color switch isn’t really ideal, there should be an actual checkmark or X in the box when chosen. It’d also be nice if when getting an Whoops; Infinity message there was an explanation as to what went wrong. I have zero experience with any box making application, and I cannot get this to do anything. I tried a 3x3x3 box with a 0.25 thickness. The other fields meant nothing to me, there’s no explanation as to what they are, or what they represent. So thus far, I’ve not been able to make any sort of box pattern on this website.