Parts coming out of fixture/jig……Test Run?

I made a fixture on the medium draftboard (.125 thick) that has 3"x.3" longitudinal slots spaced .5" apart, in a single column, 18 tall, to hold some small round parts I want to engrave. I set the parts up, started the job, and went to check on it after a couple minutes. It seems that the laser somehow pushed some of the parts out of the fixture.

The parts extend .455 over the height of the draftboard.

I want to know how to find out what’s happening. Is there a “dry run” setting I can use to pretend run the job to see what’s going on?

Do I need to make a new fixture? The parts are .490 in diameter.

Did you take out the crumbtray?

At that height, my guess is they are too tall, and either the head or the air assist hit them.

They’re sitting on the tray. When I tried this with just one item in a test fixture with only one slot, everything was fine.

The head itself won’t hit them, but there’s a part behind that sticks down lower. You might get away with it for one piece, as long as it’s small enough that the stickydown part doesn’t ever get close enough to hit it, but when you add more pieces, sooner or later it’s going to run into something.

Is there a “dry run” setting I can use to pretend run the job to see what’s going on?

Turn off the power and gently move the head so that the air assist is over the highest point of your material. If it clears, you’re good to go.

The extent of my vocabulary at any given time is directly proportional to my serum caffeine level.

I lose words as I lose sleep… Coffee doesn’t seem to help!

Don’t they make gum for that?

Thanks for the advice.

That’s what I needed. It’s bumping the parts. I apparently need to buy myself about 2mm.

If your highest part is “south” of the engrave/cut you’re doing, then the head wont ever pass over it. I’ve gotten away with engraving items that were too tall because the tall part was closer to the front of the unit than the laser head ever needed to go. Maybe not applicable for your situation, but thought I would mention it.

It certainly sounds like you an remove the tray and raise the piece up to suit your needs, you only need a couple mm. Curious to see how you work this out.

It only helps briefly. My DNA report shed some light into why I can drink coffee at bedtime without losing sleep. I’m an ultrarapid metabolizer of caffeine (CYP1A2 enzyme), so I really just get a brief window of nonfuzzy brain function, and then the brain fog descends again.

At least one of the 3 genotypes involved was homozygous, meaning you’d have it too, so there’s a good chance you burn through it as quickly as I do.

Don’t they make gum for that?

Wow, I hadn’t heard of that! What are the chances they’ve managed to make it sustained-release, rather than releasing all at once like the flavor in gum seems to do?

What you need to avoid hitting your work… 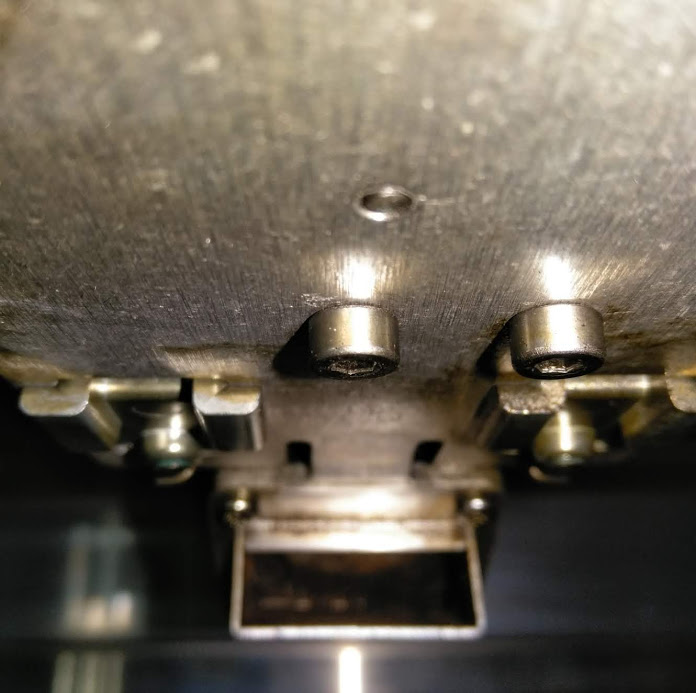 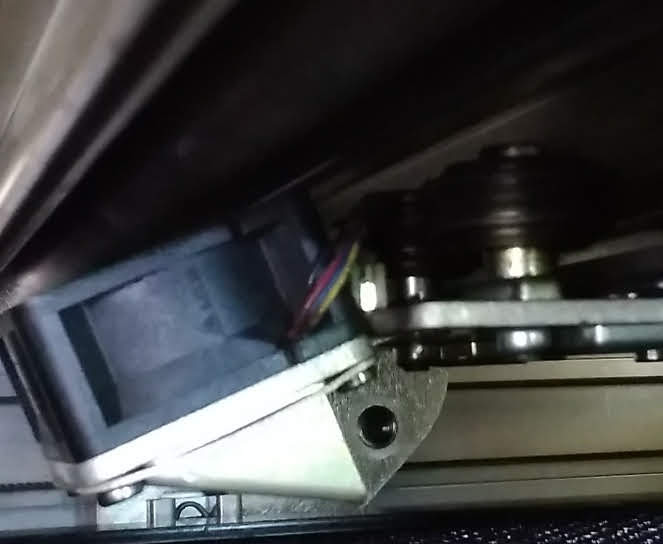 I took those pictures with my phone. You can see from this angle how far below it is from the horizontal laser plate you can see. If you have a cell phone camera you can check these things live (before closong the lid and starting the laser of course 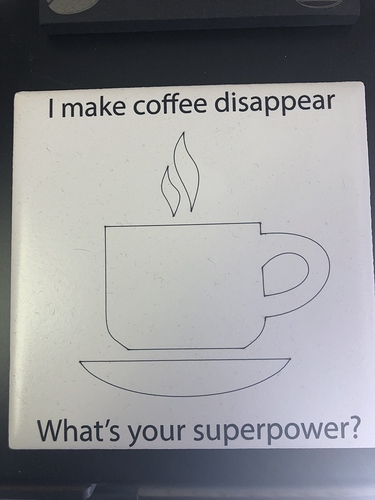 Holy smokes, these threads derail fast!
I’m trying to dream up a fixture, basically a durable, cheap, safe, easy-to-make replacement crumbtray. I’ll see if I can’t let you know what I come up with.

Chuckle! Don’t let that slow you down, the group multitasks very efficiently. Don’t want to inhibit the crumb tray redesign on your part, but there are tutorials and previously created strategies for dealing with cutting without the crumb tray that might save you some time:

After seeing a couple of people talking about the correct way to do this I made a calculator to simplify the process and hopefully demonstrate the goal. All you need to do is add the height of your object and the base you want to use and it will tell you if it will work or not and the setting to use in the GF, if it won’t work it will tell you why. If you don’t have a base in mind just put 0 and it will give you the minimum needed. [image] Zip file TrayCalculator3.xlsx (33.8 KB) Dropbox in…

Publish or Perish D6 Die Made on a Glowforge

These were sourced on Amazon: http://a.co/ceqOmch I specifically went with the 25mm (1 inch) dice for increased visability and “real estate” for engraving. They are cheaper in bulk, but as this was an initial test for a limited run, I thought it was a reasonable deal. Btw, since these are > 0.5", the crumb tray must be removed, so there’s a bit of math needed to get the engraving face back into the focus zone as well as setting the exact focus distance. It took a few ceramic tiles I had hand…

There’s a great tutorial here on cutting without the crumb tray when you want to work with thicker material. If you want to know the numbers and theory behind it, go read that first, and then come back. Thank you, @henryhbk! This method uses the digital calipers you should already have, and the not-used-often-enough ZERO button. We’re going to go through the steps from the tutorial above, but without any math or writing down numbers. The first step is to find the height of your crumb tray’s su…

And some freebies for support in the Free Files section:

Attached is a ‘laser guide’ that helps me align objects for engraving. It’s an approach others have described, and I hope that sharing my example is helpful. To make the guide, load the attached SVG and configure the outline to ‘cut’. This forum software does odd things to SVGs, but it should still work. It’s 10 in wide x 2 in tall (outside). If your crumb tray is a different height than mine, you might need to scale this slightly. And a photo of it in action. [IMG_1153%202] Instructions: …

Glowforgers, If you are lucky enough to have your Glowforge already, you have probably already run across issues trying to laser objects that are thicker than 0.5" Removing the crumb tray to fit the work-piece is the easy part. The hard part is: Finding something that is the right thickness so that the top surface of your work-piece ends up between the top of where your crumb tray would have been and 0.5" from where the top of your original crumb tray would have been Calculating the correct…

I liked the material risers @Secret_Sauce posted, but not having a 3d printer and wanting something NOW, I made something similar in medium Draftboard. These risers were just made with a box generator and press-fit together tightly. I will glue them later, but they are going to hold up fine for tomorrow’s project. [image] (I made them so the 3 sizes of riser nest together, but it also might be nice if 3-4x of a particular height nested together.) [image] The 3 sizes are 2", 2.5", and 3" s…

One of my jigs for parts 1.5" tall. A flat part just requires spacers. Some shapes require.a little thought. 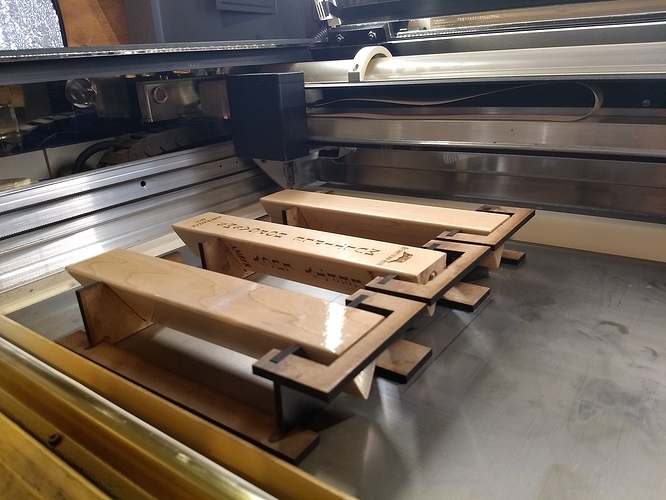 You know, you ought to sell those plans in the Catalog one of these days…that’s my favorite jig setup to date…could easily make different height spacers out of the legs to make it a Tray Table.
(Unofficial new term that I hope catches on.)

Thanks for the info. I’ll have a look at it. Right now, I’ve got some scrap MDF, and some old moulding that’s almost exactly the right thickness. Cut cut cut, dowel rods to lock it in place (just like the original), bam. I’ll post a pic once it’s finished.