Hello dear Community, today we noticed something that unexpected while using the Glowforge.
When we placed a design in the webapp and engraved it, the image of the bed after the process would show the placement of the design does not align with the location of the engraved image. The displacement would increase the further away from the center you place your design inside the webapp.
We figured that the image of the bed shown inside the webapp isn’t being corrected for the optical distortion due to the fish eye lens of the camera centrally above the bed.
So we knew that we could not reliably determine the final location of the laser work, which will get pretty ugly when working on specific objects or surfaces. Or sometimes when you place a design too close to the boarder of a piece of material, the result could slightly exceed the materials boarder.
Thus we had to find a way to reliably predict where the designs’ placement in the webapp would end up being engraved or cut inside the machine.

We realised that the inch ruler inside the webapp remains constant and the designs input location is most likely taken relative to its position, it is only that the image taken from the bed is distorted, so you can’t place your design on the image where you think you’d want to print it inside the machine.

So we ended up designing a 8"x16" ruler frame with sliders to determine the exact position/coordinates inside the bed with which we then could align our design in the webapp. This is the design: https://www.thingiverse.com/thing:2847327/#files

To use it, take one of the sheets of Medium Draftwood and position it on the bed in such a position that you can work on its entire surface. Mark the exact position of the wooden sheet relative to the bed, as it has to reach a bit over the front metal grid when you want to able to work on its entire surface, and in order to use the ruler it has to always be in the same position.
Then open the design inside the webapp. Align the design in such a way that the scale inside the design matches the scale in the webapp. You have to do this in X and Y direction. (Its a bit tricky, but it should work as the design is to scale.)
Work as follows:

Then take out the entire sheet, clean it up, assemble the sliders (maybe you have to glue them). Set the entire 2D slide ruler on a flat surface, position the sliders inside the grooves so that they are parallel to the one on the opposite side and connect them in pairs with string. Put the whole plate back into the exact position you printed it, thus the markings, and set the sliders to the center at (5.5/9.5). This position should match the scale inside the webapp, as the distortion only happens as you move away from the center. If you find the strings lining up with the scale inside the webapp you have succeeded.

Here are some pics. 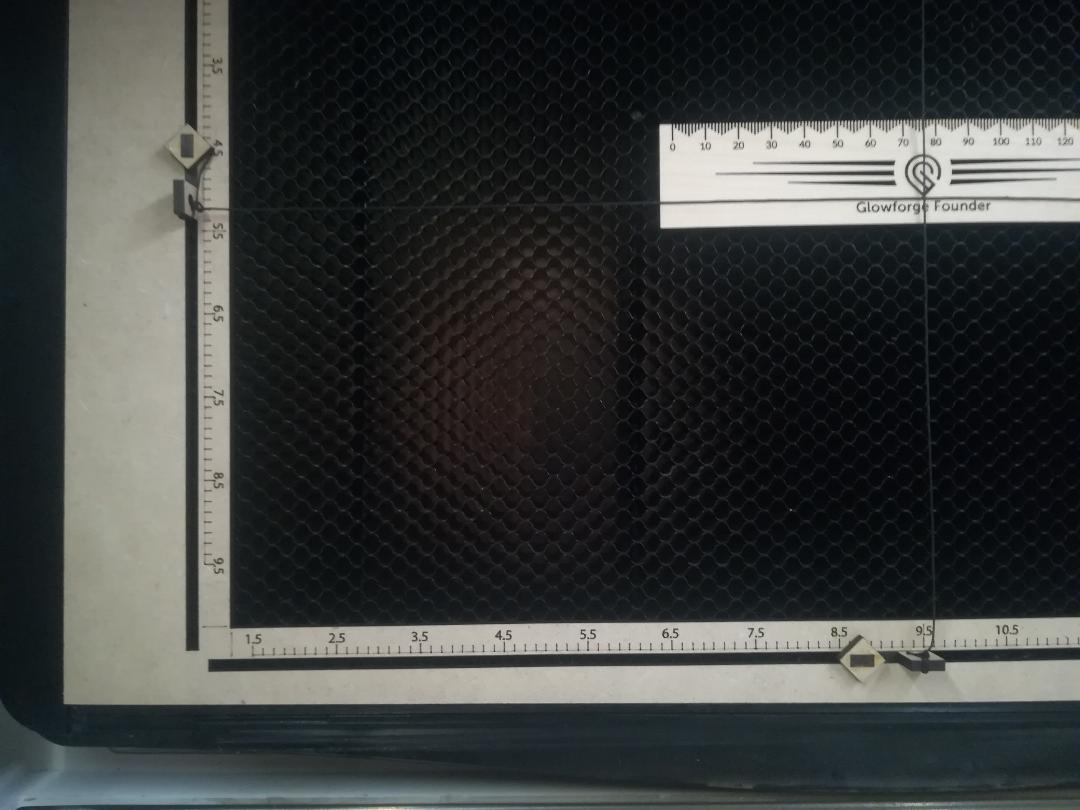 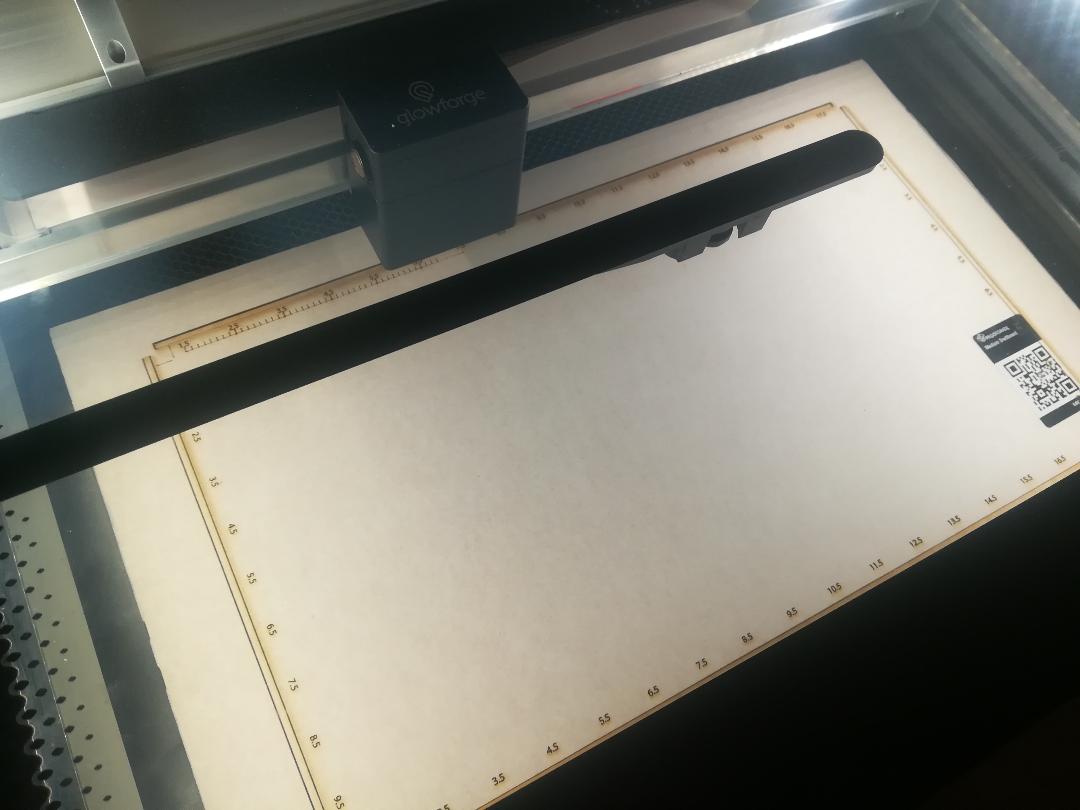 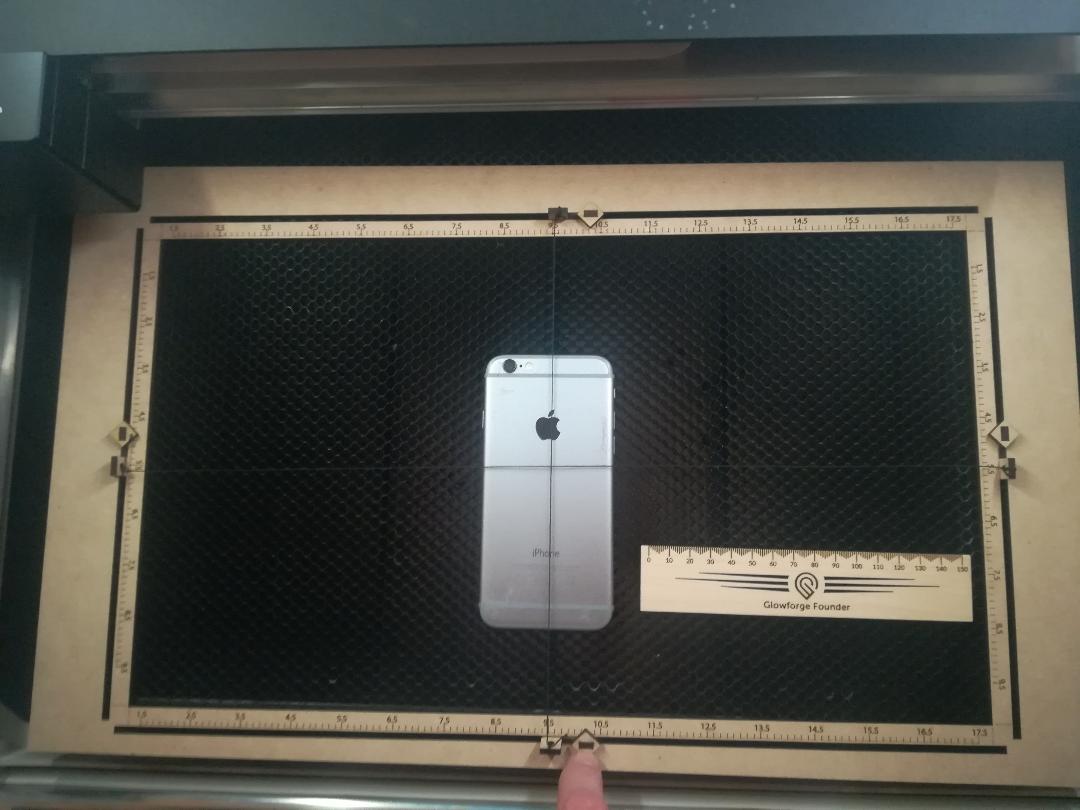 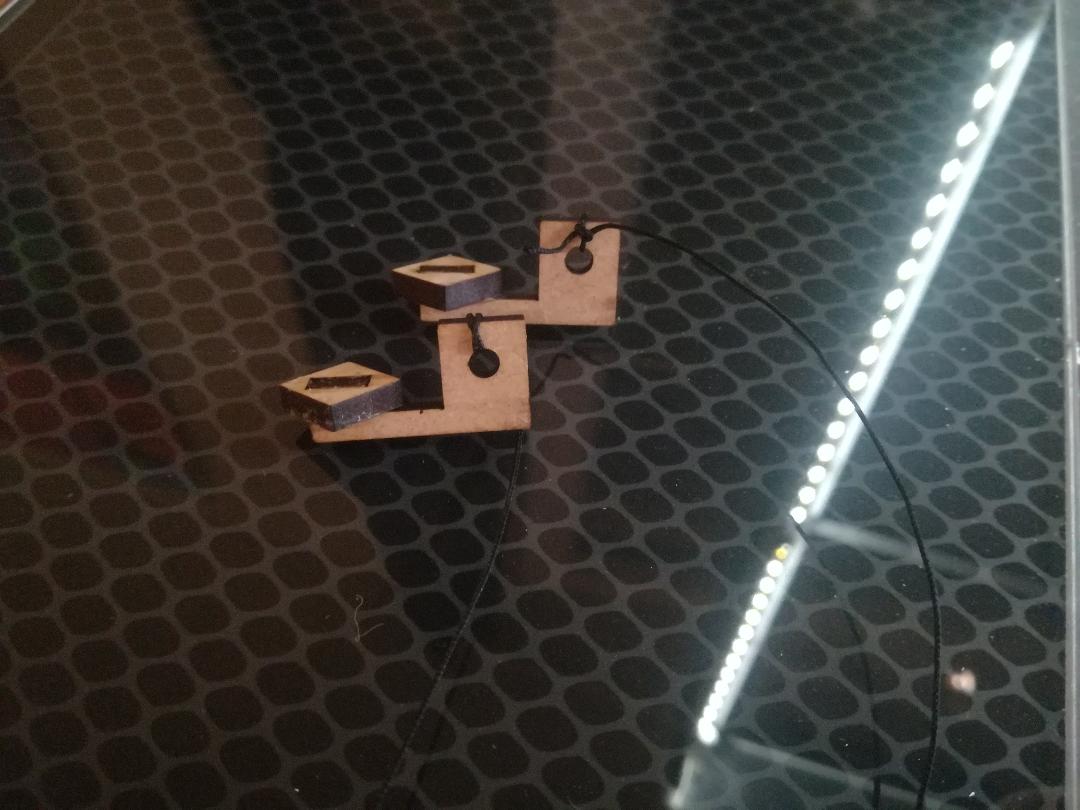 Now you can set your sliders to any position and determine its location. This location will be the same relative to the rulers inside the webapp, but not to the image the camera takes, but we have solved the distortion issue.

To use, lets say you want to engrave something you shouldn’t mess up the placement of an engraving on, like lets say a phone. So what you do is you place the phone anywhere inside the ruler frame, now placement does not matter anymore as it would have before, and move the sliders so that they mark the center of where you want to print your design. Read the location on the rulers. Go to the webapp and place your designs center at the location you read from the rulers. (This is where you can see the distortion effect as the image doesn’t line up with the ruler.) When you print it now, it will end up where you want it to go. Tadaaa!

We hope this can help a lot of people to save material, nerves and time.

*Note to the Glowforge Team: This issue has lead us to take a closer look at your product and study its current limitations. In a common effort to make the experience of using one of your machines as convenient and enjoyable as possible, we wanted to share this issue and our solution with the community. And we have some propositions which we think could efficiently increase the usefulness of your machine.

Thanks for sharing! I would like to see snap to grid also.

This is the problem spot with the idea. It’s great until the tray shifts or you put it back in a slightly different place.

We’ve discovered that if you include any vector cut work and raster engraves together into a single SVG or PDF file, the operations maintain perfect alignment relative to each other.

So for complete accuracy, you can create a rectangle the dimensions of the iphone, align your engraving inside of that using the alignment tools in your drawing software, and then save the file. When you bring the file into the Glowforge interface, you cut the rectangle out of some scrap material that you have fixed into position for the span of that operation, then drop the phone into the cutout, set the cut to ignore, and set the engrave to process. It gives perfect alignment for the duration of the job, as long as you don’t move anything on the screen, or move the backing material while the job is being processed. (And it works out at the edges too, no matter how far off the after-image appears to be.)

If you’re doing multiples of the same object, you can just cut one hole and drop another phone into the hole for engraving as soon as the first one is done - the relative positions are maintained until you close the file in the app.

There’s a tutorial with a little more description here, it’s just a lot easier to get that perfect alignment in the drawing software that was created for the express purpose of doing that kind of thing:

I have a need for something similar. I handled the get-the-jig-in-the-right-place-each-time problem by cutting a piece for thin plywood to fit between the plastic extrusions on each side of the flip-open door in the front. That was a little over 23 inches, I believe. The width needs to be relatively accurate, but you can decide on the height. Don’t make it too tall or you won’t be able to maneuver it into the GF. I created a sample square template to cut out of this jig in Inkscape with a specific lower-left corner point. This jig sits on top of the crumb tray edge. Now anything I want to cut at a specific location, I can push it onto the lower left corner of the jig. 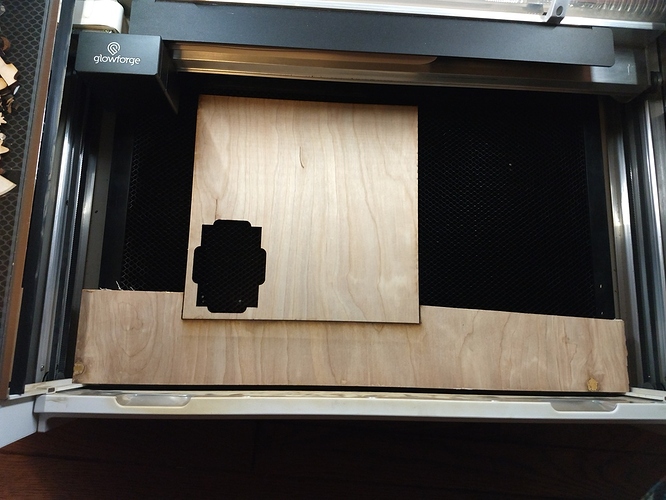 FullJig.jpg1154×866 250 KB
The extra template is for a shape I’ll be using a lot, so I made a template that slips into the jig. This allows my template to sit flat on the crumb tray and not ride on the edge, like the jig.

Here’s a closer look at how it sits against the front of the GF. 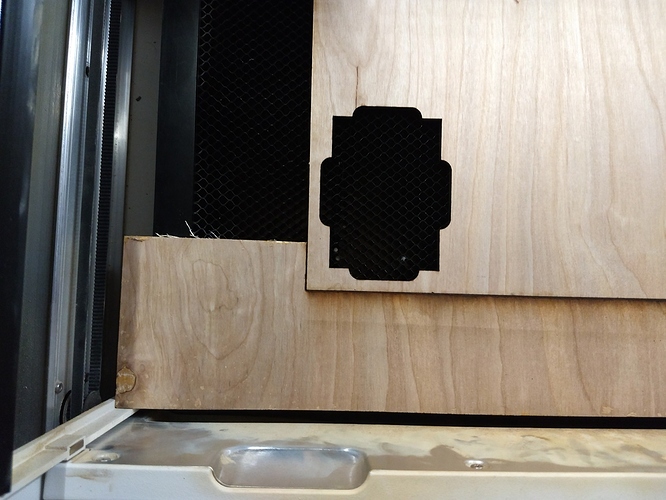 As you can see the jig was VERY rough cut, but the slot for the template was cut by the GF, so it’s precise. It’s not the prettiest solution, but it’s working for me.

The issue of the distortion of the image from the bed inside the machine should be an easy one to correct with an optical algorithm,

The image is already being processed to flatten it or, due to the very wide angle of the lens the image would appear with significant fish-eye distortion. There would be no straight lines in the image.

The math is fairly standard stuff, sure. Programs to “de-fish-eye” an image have been around for a long time. But it’s hard to make that work with high accuracy the way GF is doing it. The difficulty occurs because camera is only about 4" away from the surface it’s looking at, and it is still able to see >10" to either side. The geometry means that the further away something is from the lens the less accurately it will be represented, even slight unevenness in the height of the material will translate in to an offset in the position of that point on screen. And any slight imperfection in the lens will be magnified, causing smaller or greater errors depending on where it occurs in the field of view.

Yeah, it’s a minor pain to have to cut a jig again each time I re-do something. But standard corrugated cardboard is cheap and works great. I’m carving up boxes I would otherwise send to recycling. And this way I simply don’t care about how the image aligns with the laser’s position.

Yeah, anchoring off the front door is actually a pretty good solution that I’ve used as well, if I just need to get something squared. The door is fixed, unlike the tray, which will actually move in those little divots. I just cut a few spacer sticks and use them mainly to center smaller pieces of material a little closer to the lid camera, where the alignment is naturally better.)

Thanks for a great discussion! I’m closing the thread since it seems to have quieted down.