Didn’t and don’t have a name for my GF (let me know if you have a good one) but I liked the idea of using Fëanor, he who crafted the silmarils, as a starting point (from J.R.R. Tolkien - The Silmarillion). Not a Tolkien nut or anything, but the Silmarillion is an incredible piece of literature, and I couldn’t think of anything better or more creative.

Had lots of different versions, but the image I ended up with excluded Fëanor all together and leaves only the 3 Silmarils, the 2 trees of Valinor, and some intricate border work which occasionally hints at stories from within the Silmarillion (loosely and with iconography, of course). 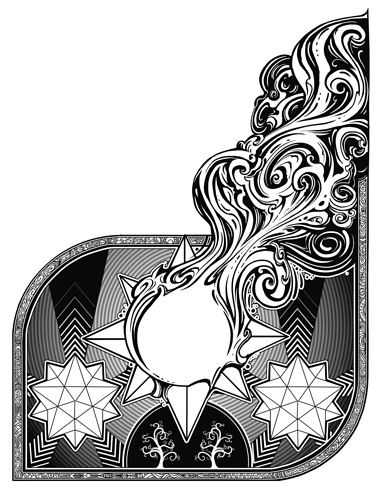 I had an immense amount of difficulty getting this image to print the way I wanted, but in the end I eventually got the sucker engraved at a lower quality than I had hoped. It came out alright, though. 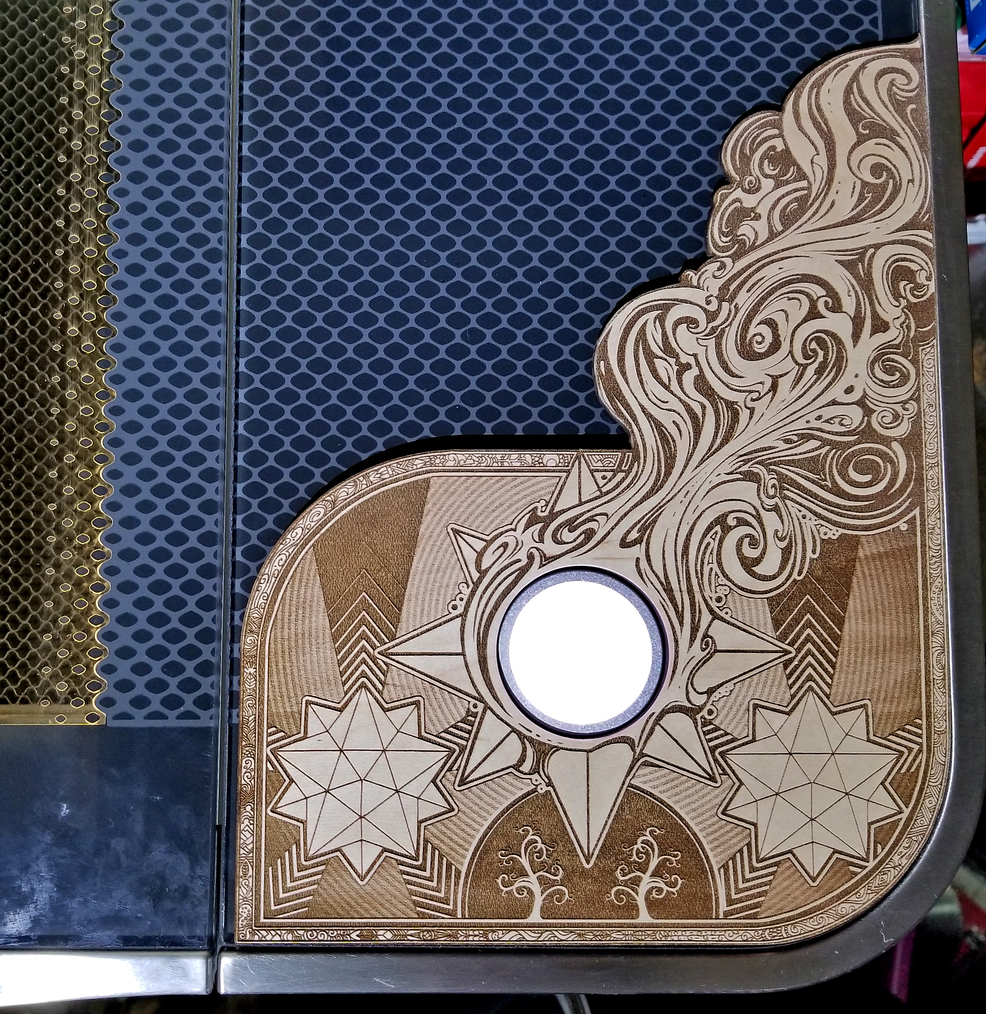 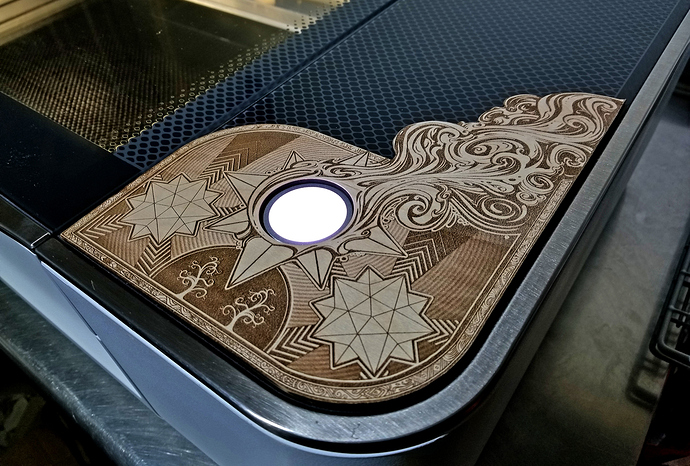 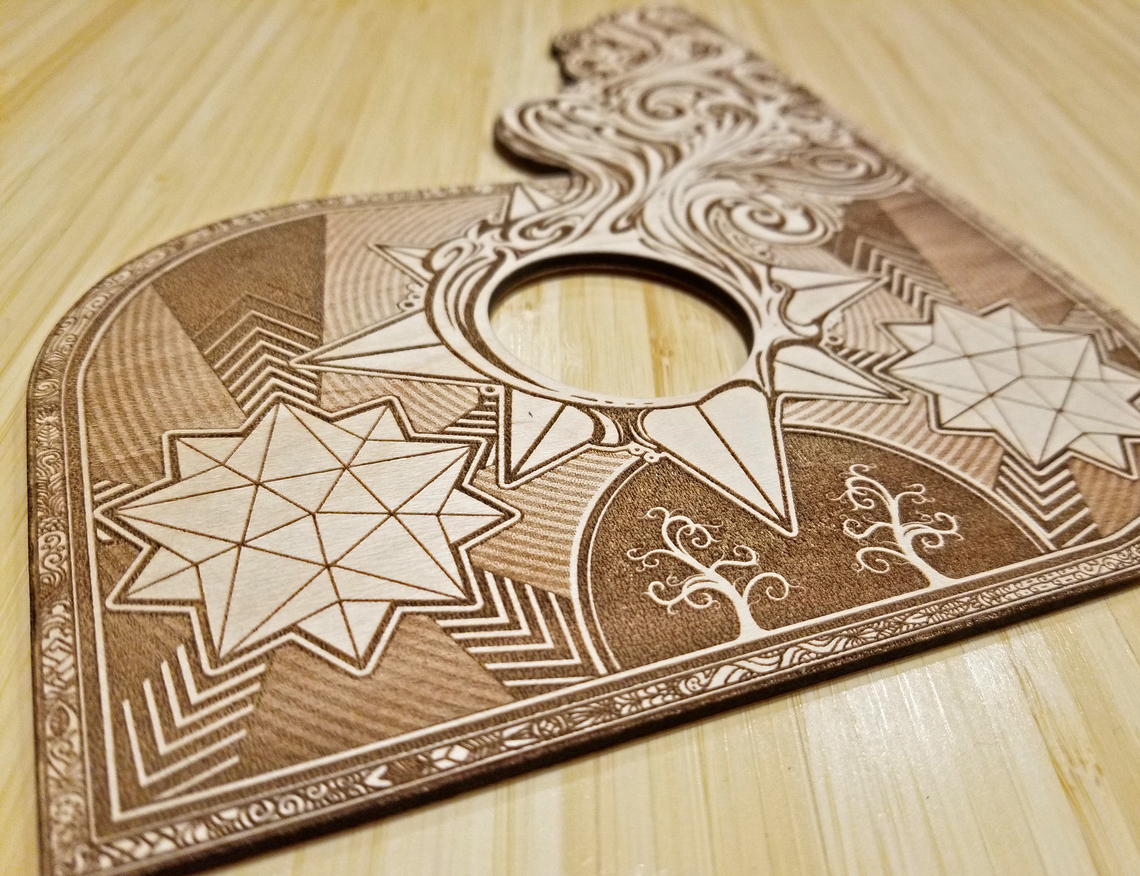 Since it’s not THE version I hoped for, I’m holding out for another try, and have accepted the loose fit around the button and the not-perfectly concentric fit with the metal flashing on the machine, for the time being.

Very awesome design! I read your other post and could feel your frustrations, so I am glad you got a version (albeit, not the version you wanted) to work.

What was the laser time on that?

Wow, it is getting harder and harder to feel like I can do anything impressive when I get my forever unit.

The Silmarillion is a journey, it took me 2 attempts before i was finally able to read it for the first time - and even then i had to take notes! Now i can usually blast through it (i have a list of ~20 books i re-read often and it is on that list) but man oh man what a shock when you first try!

Why dont you call it Carcharoth, after the werewolf that swallowed one of the Silmarils?
The idea of a powerful light burning away inside is carried nicely in this name

Only an hour and a half - I heard in the forums that the current limitations for engraves cap at 3 hours, so I thought I’d slowly lower the quality until I’d get past the errors and hit a print time of like, I dunno, 2.75 hours or something. But It never worked until these settings. Who knows.

Especially with all the units rolling out now, and so many “NEW” posts everyday, THIS is exactly how I feel.

What a great idea. Most impressive. Too bad it was such a challenge to pull off. I haven’t done much complicated engraving so I don’t have much a handle on what goes and what doesn’t. Thanks for documenting the effort!

Yes @bdm, Carcharoth would be great! Doesn’t seem to be on anyone’s list yet.

Back in the dark times when the first Glowforges made it out of development but not quite yet in the wild, there was this topic:

What will be your Glowforge's personal name? Everything Else

Continuing the discussion from Beta - So this happened: So for we have Showforge # 3, Joshforge and Glowey McForgeface. I’m thinking of Sting in honor of Frodo’s sword and one of my favorite musicians.

Recently @dan started this one:

Spare Glowforge names Everything Else

Not a Tolkien nut or anything … excluded Fëanor all together and leaves only the 3 Silmarils, the 2 trees of Valinor, and some intricate border work which occasionally hints at stories from within the Silmarillion …

You may want to reconsider your nut status.

One other tip - I’m not sure what orientation you were using on your screen, but if you rotate the image so that the longest axis of the engraving runs horizontally, you will significantly reduce the time it takes, and can sometimes increase the resolution a little bit.

(In other words, it’s better to rotate that top image 90° and print it that way, than it is to leave it the way it is. The orientation won’t matter to the Glowforge software when it interprets it. You can print converted text upside down…doesn’t matter to the software.)

SUCH great information. Thank you!

That came out so amazing! I love that you all have been decorating the button. Seems like a rite of passage for owning a G-Forge! Too cool!

I’m with you. Most of my ideas are not, in themselves, artistic at all. I plan to use mine to make parts for ultra-precise jigs I will need for some of my more ambitious woodworking and woodturning projects.

I doubt I’ll be posting pictures of anything as impressive as what the artistic geniuses here are making.

I doubt I’ll be posting pictures of anything as impressive as what the artistic geniuses here are making.

You should! I think those use cases are inspiring. Kind of a, “wow, I’d have never even thought to use it this way for that - slick!”

Whoa! This is stunning!
And I agree, that book is an amazing piece of literature.

Fëanor is also my GF’s name