The overnight bag of 1,000+ stitching holes

I spent enough of November on the road that there is now another airport where the bar by the gate knows not only my drink order but my dinner order and TSA apologizes for running through the list of things they have to warn people not to have in their bags… (Also, that moment walking through an airport when someone called out “Hey Glowforge!” … and it turned out to be someone I’d met at a different airport.) Never let it be said that Glowforge doesn’t send me to interesting places! So, since I wasn’t going to be home for a few weeks, I decided to give myself something “interesting” to build in hotel rooms at the end of the day: 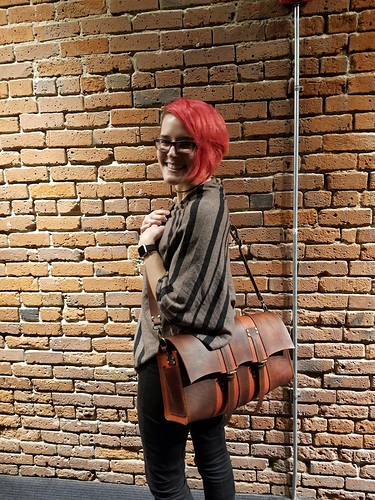 Yes, I made Linden model for me again.

left over after some of the common office prints (I might be a little obsessive about the remnant left over after making a Better Together Clutch), this project was really about maximizing what I could do with a full sheet of 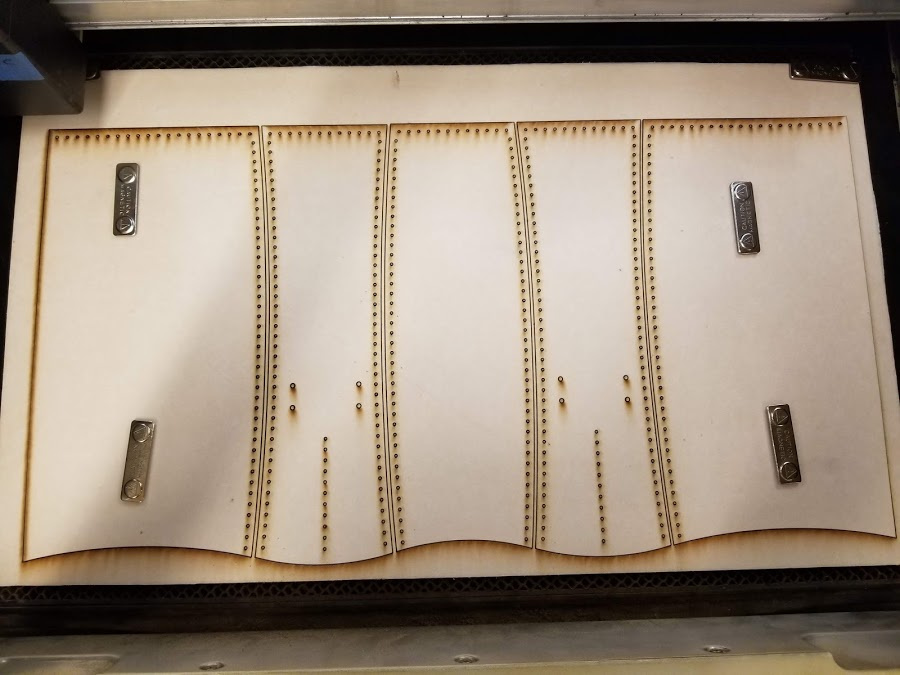 No inch of printable area left behind! You can see the insanity already… but, I had a bunch of evenings to kill so… what’s a few more stitching holes? 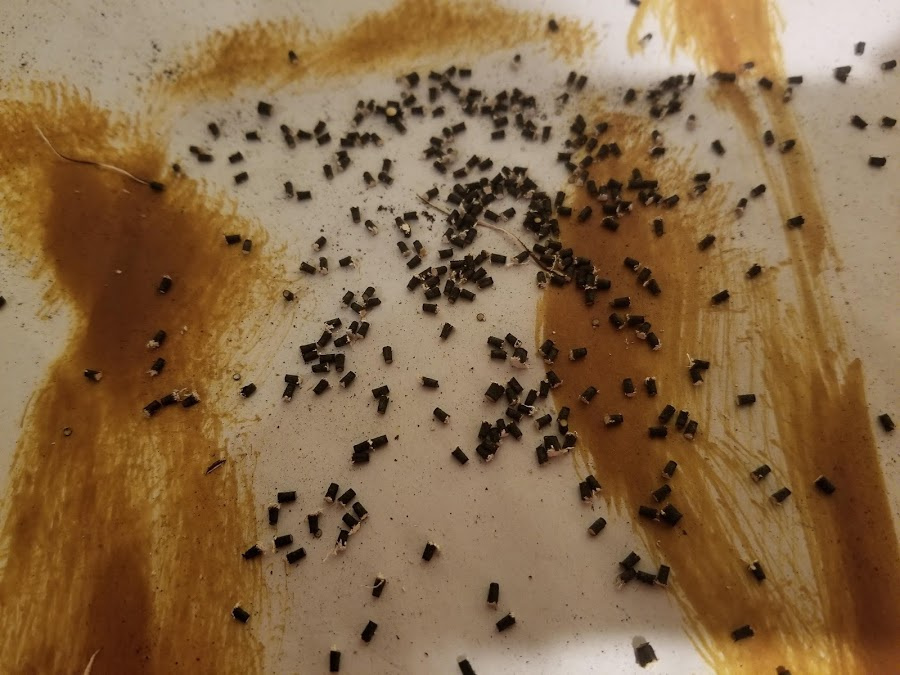 About an hour of print time left me with 27 parts… 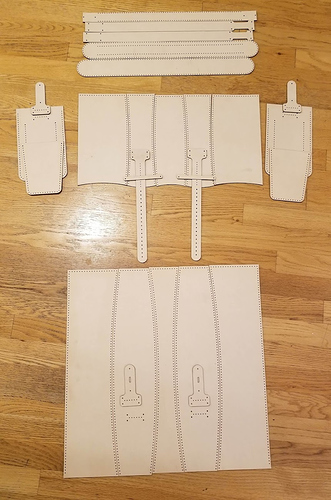 And at this point, I hit the first snag in my brilliant plan. I had to catch a plane before I had a chance to dye any of that

While I won’t say that I’ve never taken a box of dye with me on a trip to do crafting in a hotel room, I will say that I save that kind of flirting with danger for my own travel… I don’t think a line item on my expense reports titled ‘damage to hotel carpets’ would go over well (call that a hunch, I don’t want to find out!)

So, a week later, I spent a chunk of the weekend turning this: 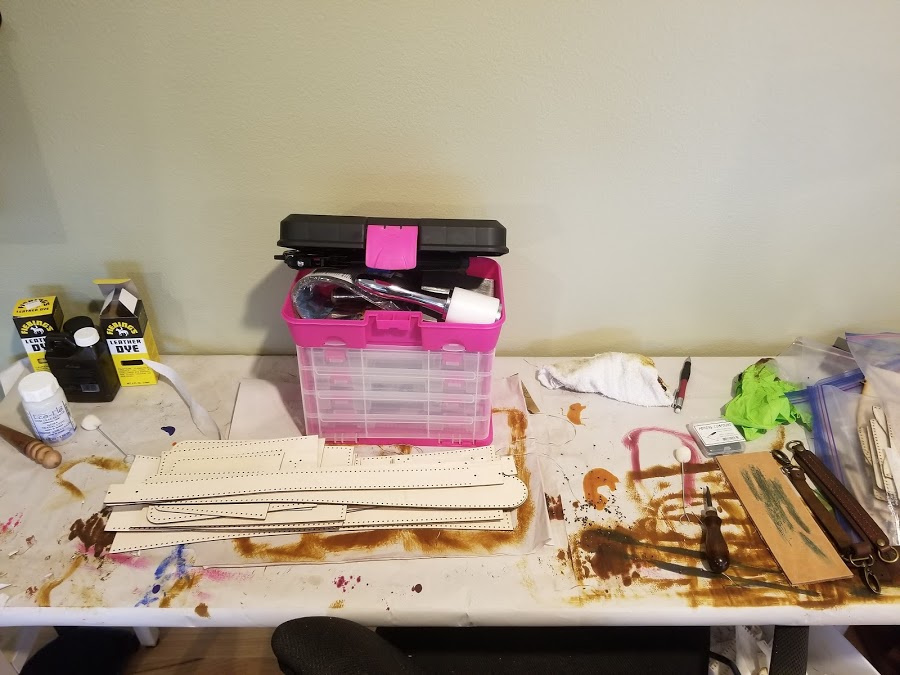 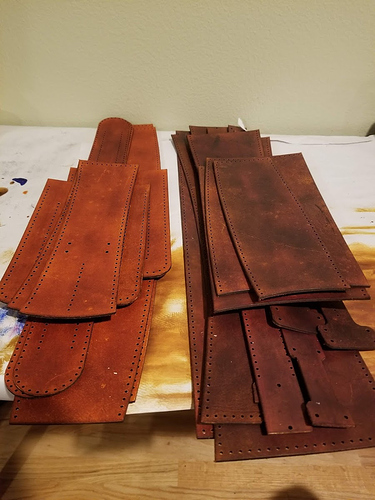 Yes, the pink tool box is essential to proper crafting. Large workspaces, however, are not essential, which is a good thing because the only table I currently own isn’t very large.Then, after a brief break for Thanksgiving, back on the road!

When I’m designing these things, one of the things I try to think about his how long will this take to build? Is this a 10 hour project? More? Less?

I wish I’d done a bit better keeping time on it… I managed the top flap in about an evening: 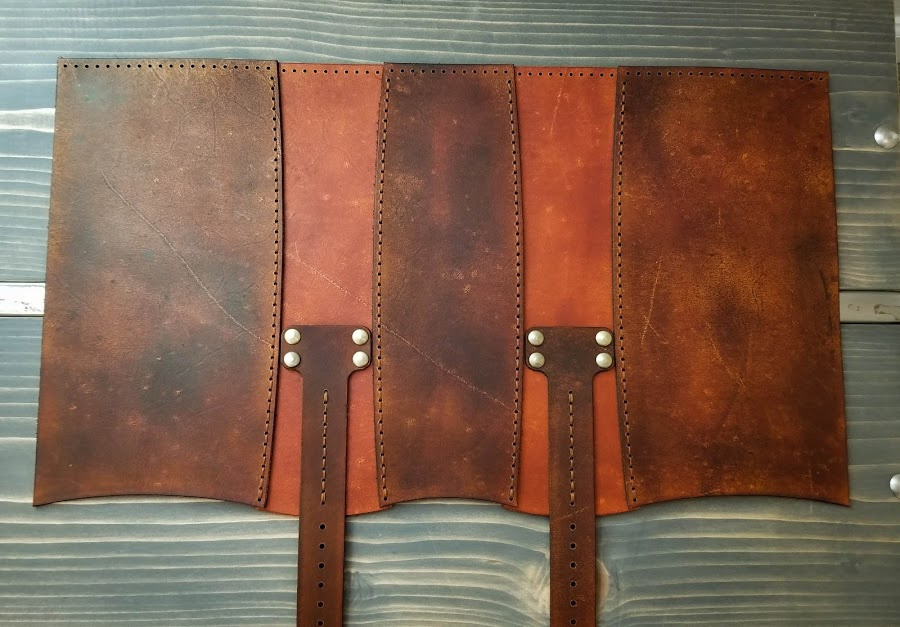 But I didn’t time it. I did time the body… 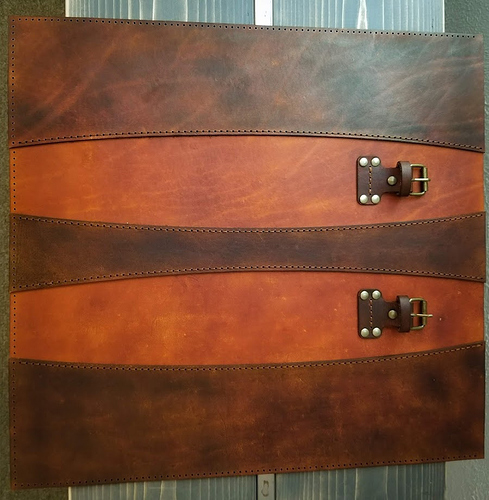 Each of those rows was about 80 stitch holes long and 35 minutes to finish. So, call it around 2.5 hours by the time you add the buckles in.

All in all, it made for a spiffy bag: 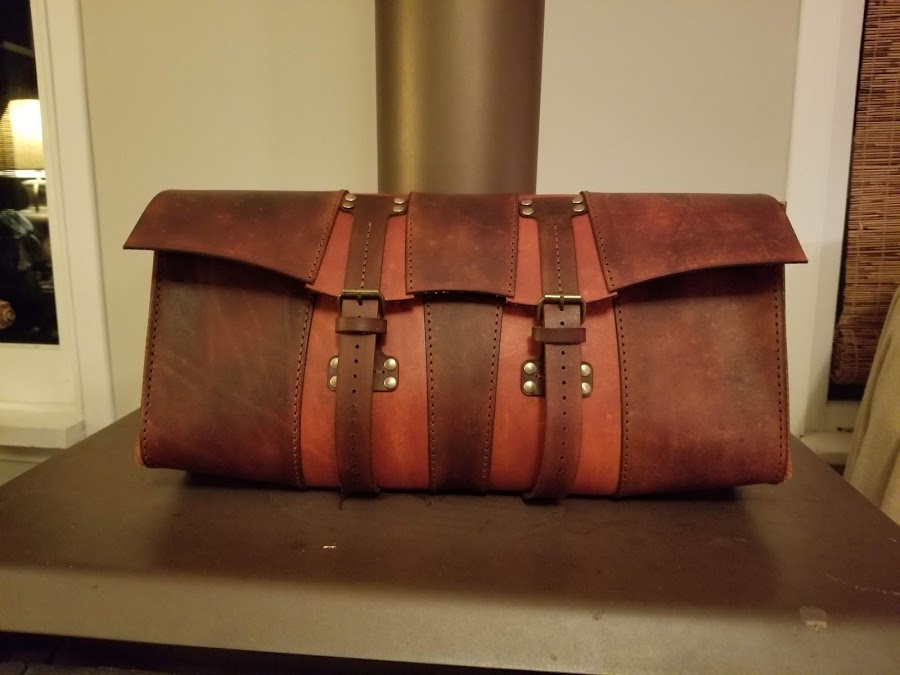 Things I learned so you don’t have to:

Pockets
I tried this thing with the pockets on the ends where I cut the sides of the pockets at a slight angle and pulled them to parallel when I stitched them in place on the idea that I’d get a reasonable pocket out of it: 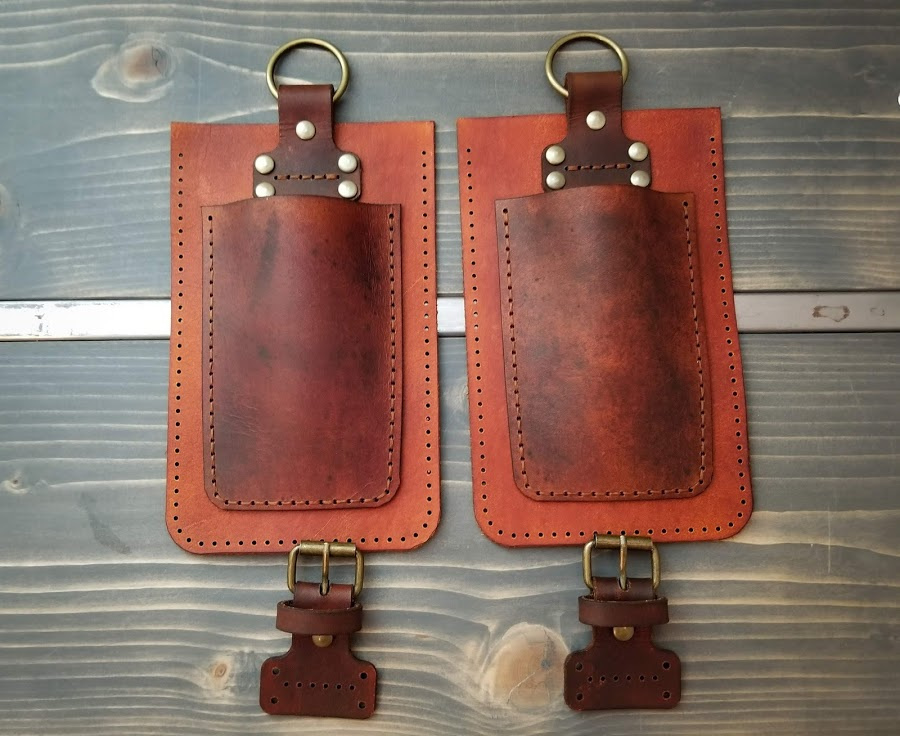 image.jpg900×736 197 KB
Instead, I managed to create girl pockets. They look pretty but they don’t hold much more than keychain or wallet. Next time, gussets.

No Handle: What was I thinking?!?
I did build a shoulder strap for this, but I didn’t put a handle on the top flap. One day of taking the bag to work and I’ve lost count of how often I’ve wanted to pick it up by a handle on top that isn’t there.

Attaching the ends
There are two ways to attach the ends on something like this. Does the end cap bend inward or outward? 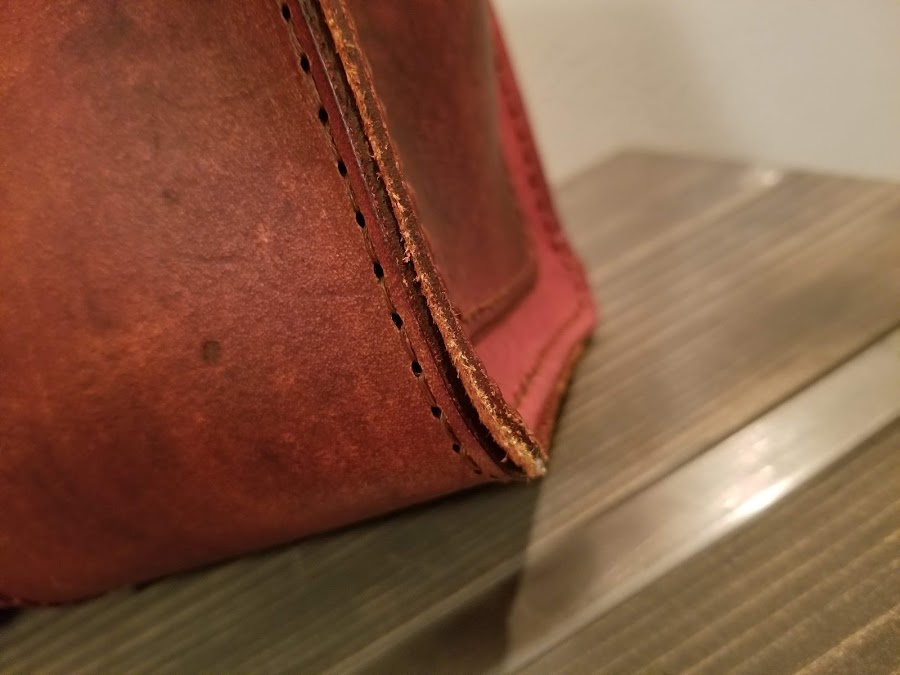 image.jpg900×675 111 KB
I wasn’t sure which way would work best so I went with inward. Answer: Outward would have been better for this one.

How much thread do I need?
At the end of a week of sewing I’d amassed a ton of excess thread… 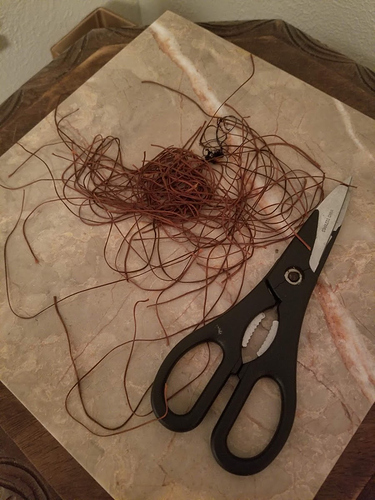 image.jpg900×1200 251 KB
I found that 4X the length of the stitch I was placing worked well and left me with a healthy bit of excess every time. I’ve been told 3X elsewhere, I just didn’t find that to be the case for me.

And finally
If you have to spend a few weeks away from home, it’s actually possible to make your own luggage while you’re traveling! Beats the heck out of being generic black roller bag #12 when you’re standing in line to retrieve your bag from the TSA

WOW, love it! So you used 5 full sheets to make this? Also at what thickness were the sheets?

What a beautiful bag!

I’d love to see a refined version of this in the catalog someday!

5 sheets though it’s probably closer to 4.5, the last one was mostly shoulder strap. Thickness wise, it’s all

That’s really beautiful…I’ve avoided stuff with lots of stitching, but I might just have to take the plunge after seeing what you’ve done!

Amazing piece. Inspired by your last leather work I tried just a drink bottle holder and ended up having to punch holes by hand after. Is there a standard diameter hole and distance from the edge and next hole that you use?

Does the end cap bend inward or outward?
…
I wasn’t sure which way would work best so I went with inward. Answer: Outward would have been better for this one.

Is that so you don’t have the exposed cut edge? The panel would have to be cut larger, no?

Such a wonderful bag! I love the style, and your stitching is amazing. Did you lug a stitching pony with you?

The glowforge store doesn’t provide weight in the descriptions like most leather descriptions. So I am guessing you used thick leather. About $150 of leather?

Is there a standard diameter hole and distance from the edge and next hole that you use?

I’m fiddling with what’s optimal but I can show you what I do (fair warning, I’m one of those pesky Illustrator people who has never managed to master Inkscape.)

Step 1: Create a circle somewhere between .06 and .07 inches in diameter. (This really depends on your needle more than anything. Thinner needle, smaller hole is okay.) 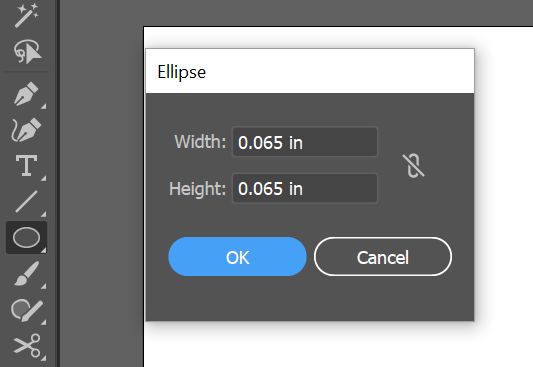 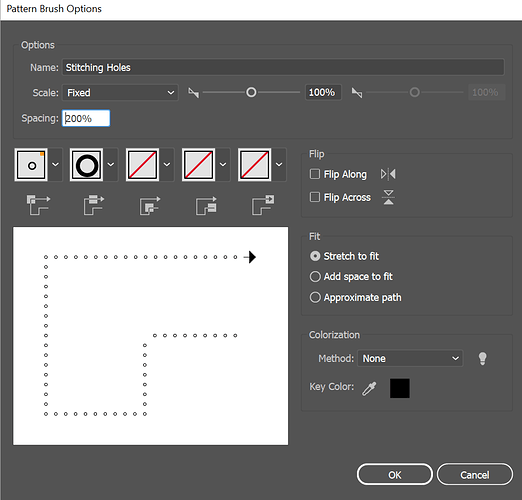 Step 3: I build most things that need stitching holes out of segments so I can grab a segment and move it a fixed distance before applying the brush. (Offset path is also a handy way of doing things for some shapes and the principle is the same.) 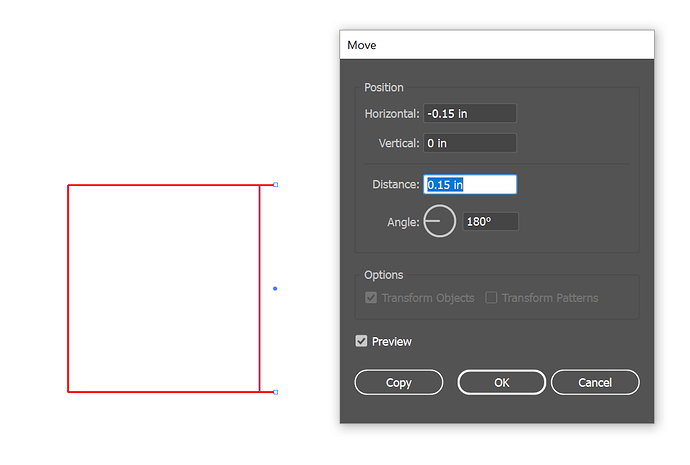 image.png1075×726 20.6 KB
So, Object > Transform > Move, just use the copy button. I’ve found that between .1 and .2 inches from the material edge works for most of the things I’m doing. More load bearing / structural = further from the edge. Decorative stitching or things like bracelets can be closer to the edge.
Step 4: Apply the brush to your new line. 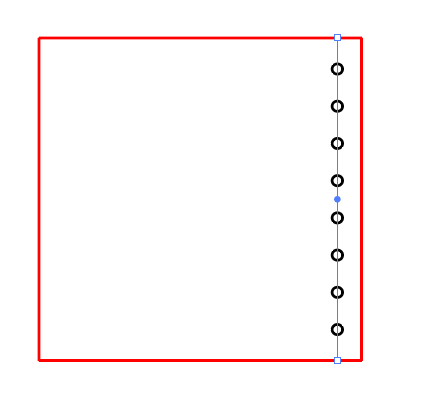 Step 5 (Optional): Object > Path > Outline Stroke. Doing that will give you a group of individual circles that can be edited. Sometimes I need to delete a single hole at the top or bottom of a row to prevent collision / overlap with an intersecting row of stitches, sometimes the brush goes wonky around corners… it’s just handy sometimes.

I’m a long way from an expert with this stuff so don’t take any of the above as gospel or best practice… but so far, trial and error, it’s been working for me.

Also, by keeping the brush defined as black, when I build my cut lines in any other color (I could default to blue just as easily as I did to red but somehow red just makes sense for me), the stitching holes automatically load as the first step to print which is super handy.

Is that so you don’t have the exposed cut edge? The panel would have to be cut larger, no?

Yes, and in this case, the panel was cut larger. The distance from the stitching hole to the material edge was the same on the end panel as it was on the body of the bag which worked fine everywhere but the corners. In hindsight, flipping it the other way, I wouldn’t have to worry about things being as ‘perfect’ in the structure of those corners.

Did you lug a stitching pony with you?

Nope. It would have been super handy, but I don’t actually have a stitching pony and the ones in the office are small enough that for anything much larger than a wallet, I don’t know that they’d help much.

The glowforge store doesn’t provide weight in the descriptions like most leather descriptions. So I am guessing you used thick leather. About $150 of leather?

About that, yes. The first three pages of the design are highly optimized and barely fit in the printable area without needing to use passthrough. The last two pages are a little less optimized. I’ve got some bracelet designs and a few other things that print fairly well even in the narrow edge that’s left at the top of the sheet as sort of a ‘how do I recoup some of the material cost of this massive thing’ so I don’t tend to think of the material cost of the project as being 100% of 5 sheets, but it’s close.

GTFO. This is the exact info I need. Perfect. I have been putting holes down on a line, then distributing them via the align menu. This is waaaaaay better. Squeeeee!

You do such incredible work. But my question is can this be accomplished in Affinity Design? Between our Pfaff and Singer we can sew just about anything but hand stitching gives some items like this much more of a different look. And I have not figured out how to do this in AD. Thanks for sharing your beautiful work!

Unfortunately, I don’t have a copy of Affinity to test with. @Jules or one of the other amazingly talented wizards of design software here may be able to say though.