I got a sheet of low odor rubber from Laserbits (along with a few other types of materials that await testing). I have no experience making rubber stamps other than taking big rubber bands in junior high and using an ink pen to write my name backwards on to make a quick stamp for wasting time in math class. 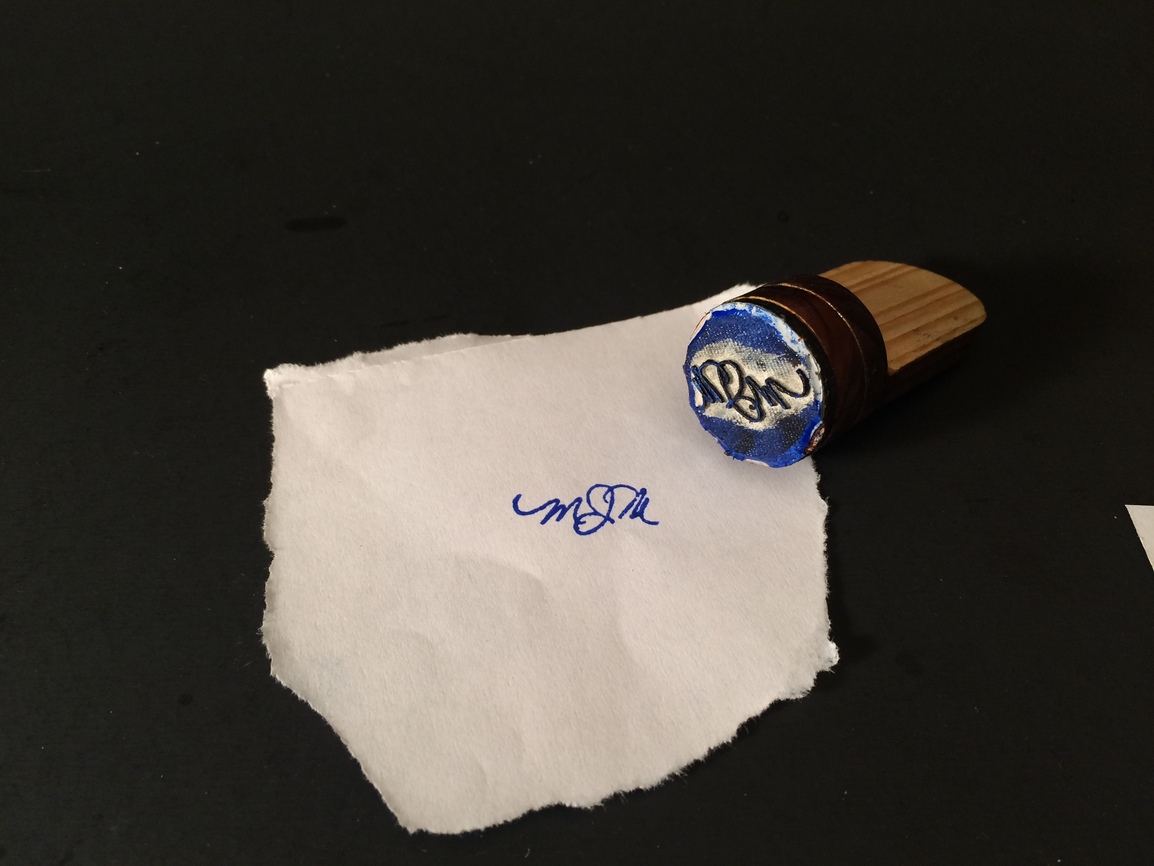 @dan requests that I do projects as separate posts so that they are more easily tracked and studied by everyone; however, I’ll just stick an update and another example of a stamp here while I can still edit since this stamp is pretty much an extension of the first one but with a standard handle. I used 50% power 335 in/min and 675 lpi. Took about seven minutes for this 1/2" by 2" stamp. 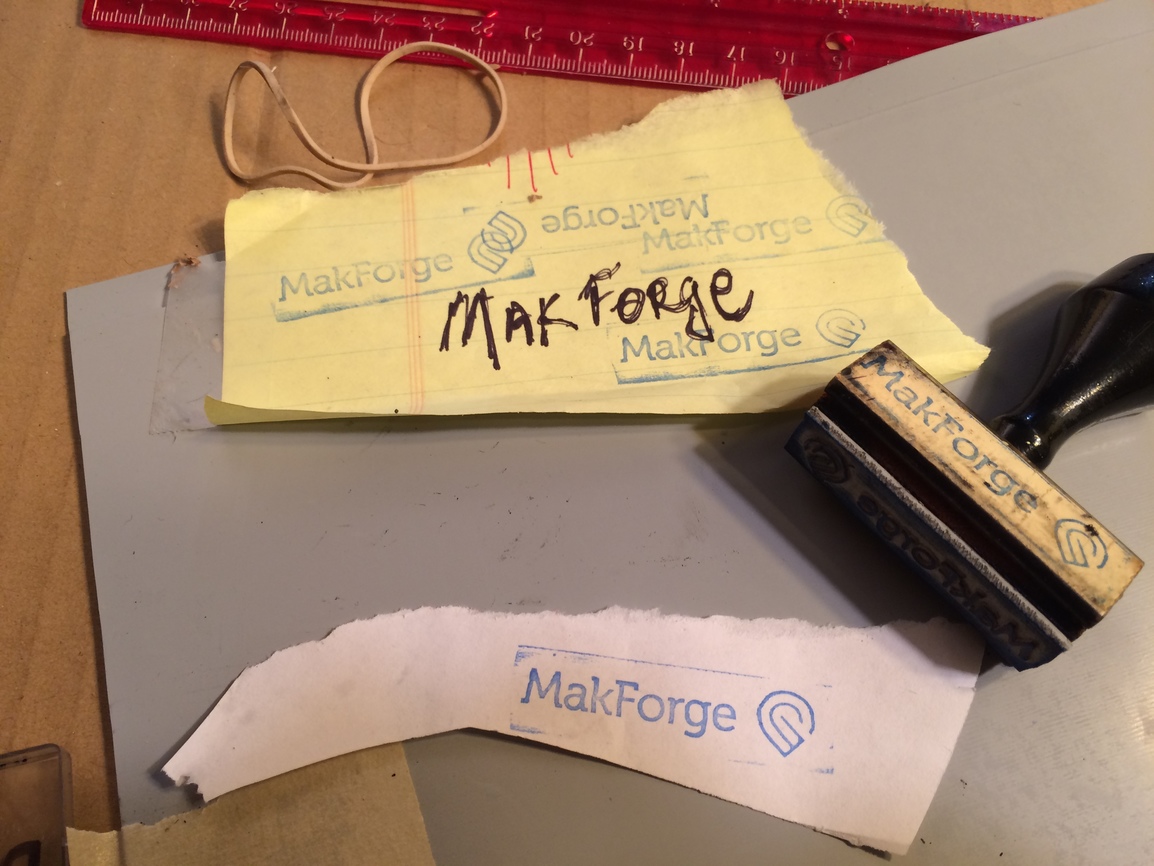 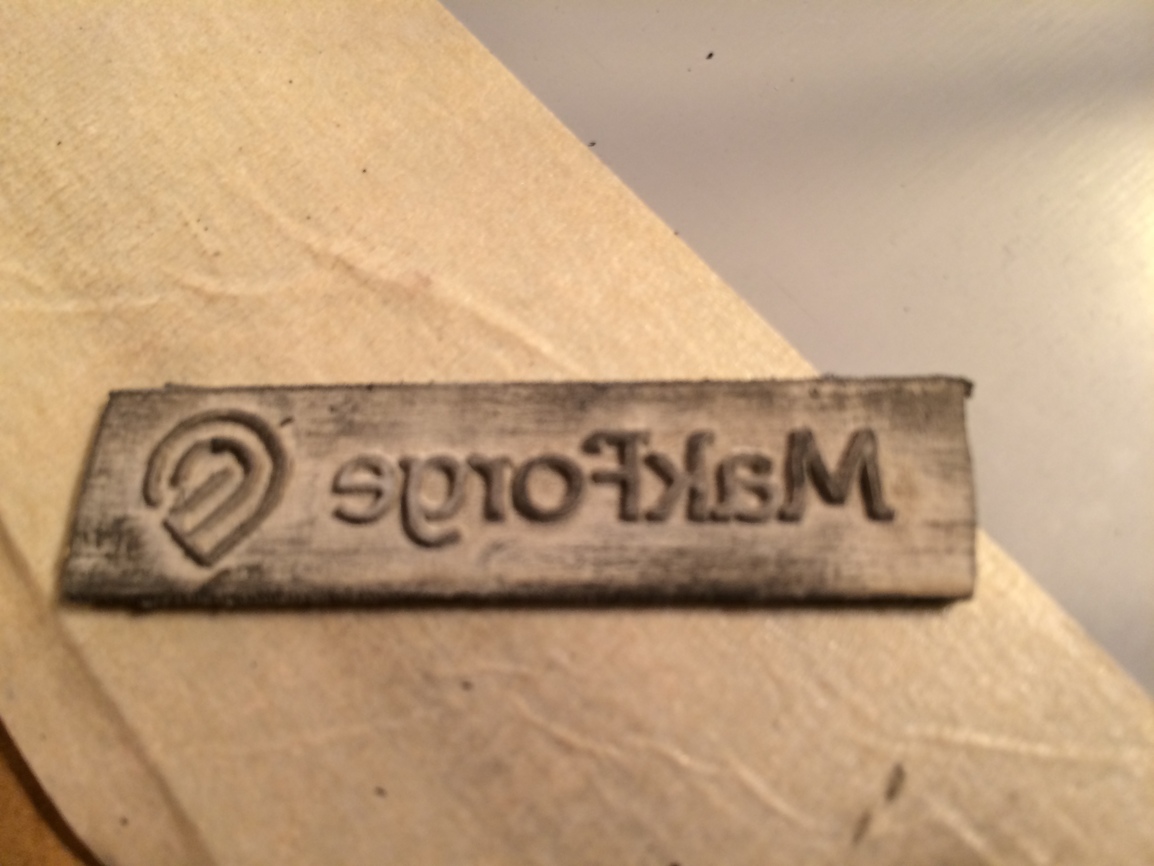 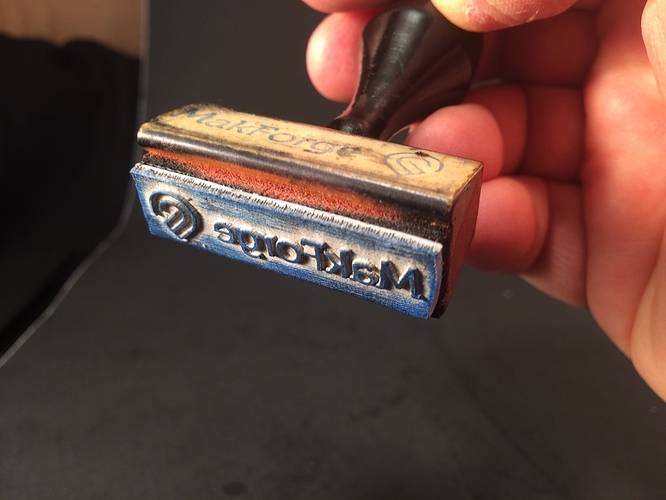 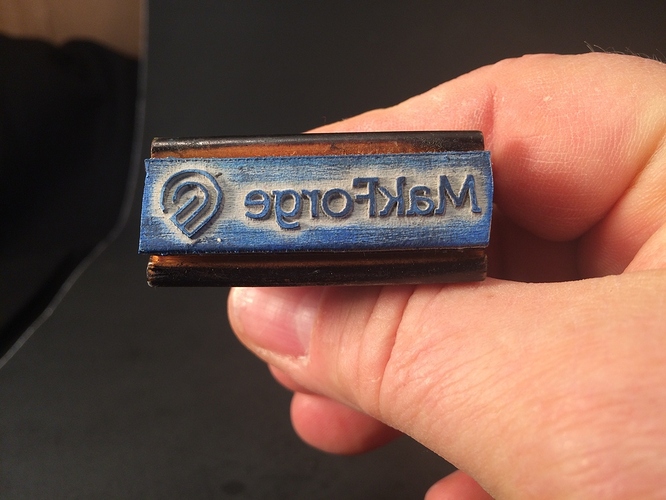 Here is the final result after making a stamp handle tonight.

I do use a rubber stamp every day as I go through the parish’s bills and approve payment. I write my initials and date on each and that’s that. I’ll probably keep using the pen to do my initials but I have made some digitized files through the years of my signature and my initials for various and sundry reasons, so I had the initials ready.

I put the 12x12 sheet of rubber in, it’s about .02 inches thick. I had read the Laserbits tech specs on natural rubber and was surprised at how much power it took to engrave and cut, So I made an image reverse image bitmap of the cutaway of the initials and imported it into the user workspace and set it for 50% power and 20 in/min feed. I stopped it about a minute into the engrave because it looked like it was bubbling up and I couldn’t see what was going on. Definitely should have taken a screen shot of my settings for documentation, but I think I did 450 lines per inch.

It turns out that the rubber turns into ash and that accumulates on the surface. The settings were correct for the depth I wanted to etch away and so I did the whole engrave. 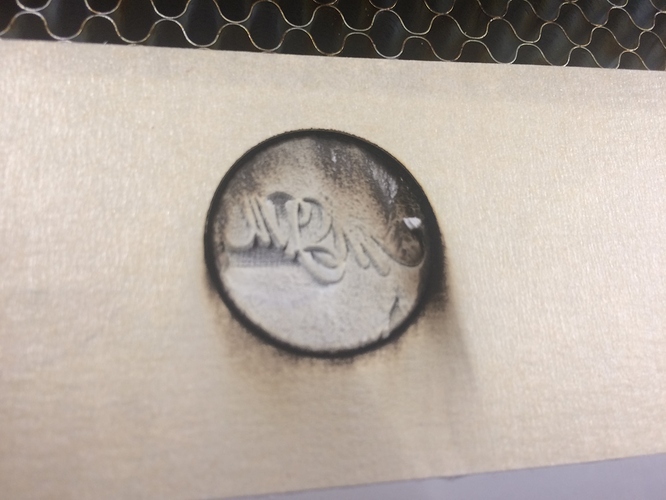 IMG_4647.JPG1154×866 212 KB
This is the result on engraving and cutting the rubber with some masking tape over it. The white/grey stuff is the ash. It brushed away and revealed a nicely detailed rubber engraving. 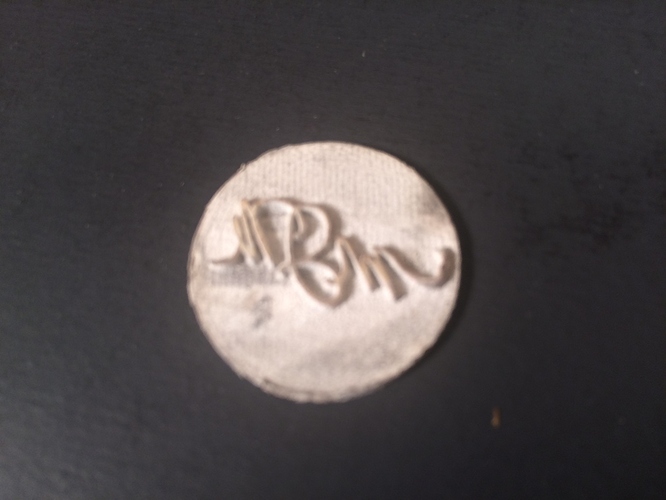 Which is hard to see from this badly focused shot. 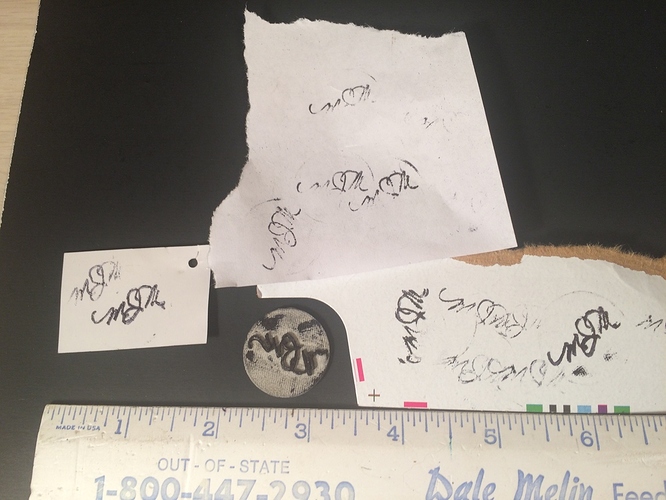 IMG_4652.JPG1154×866 264 KB
I took a giant marker and inked up the surface and took a few shots of the result. It was hard to fine white paper at that moment. I was happy with the results for a first attempt. I did not have a stamp to affix it too.

When I took it into the office for the daily, “Look what I did on the Glowforge last night,” session, the staff quickly found me some ink pads and a few obsolete stamp handles.

It was then that I noticed the little bits of material hanging from the stamp around the relief. Of course, I had forgotten to take off the masking. It was still there over the whole surface of the stamp but had started to come off from repeated stampings. After I took the masking off, I realized just how detailed the relief had been left. I got pretty excited.

So I came home and whipped out a stamp handle in Inkscape. I used some white cedar I had planed up on Monday to a smidge over 1/4". The Glowforge cuts through in one pass. 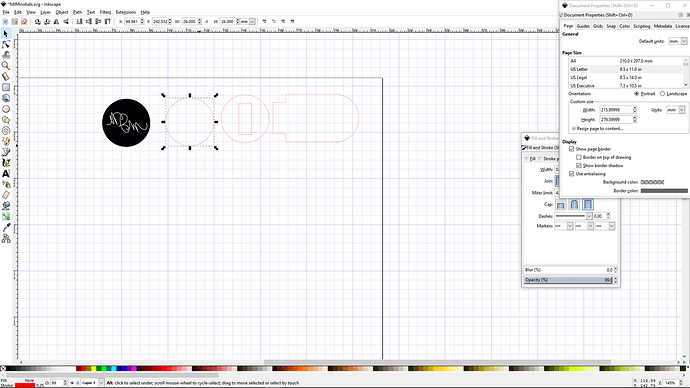 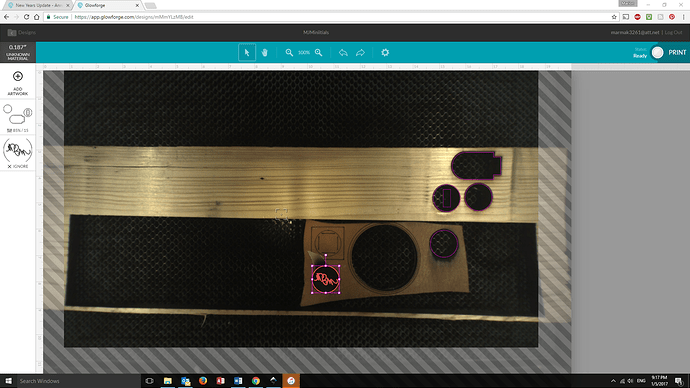 This is a post cut shot to demonstrate one possible work flow. I finished the wood before I did a print for the leather, but the same design could do all three materials. 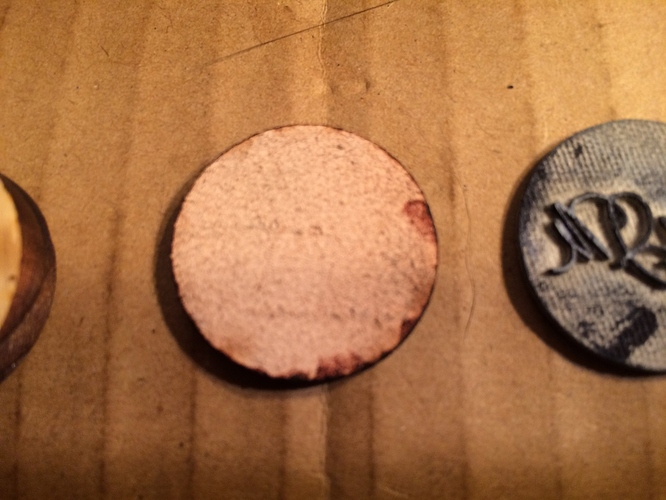 I cut a leather backing to the rubber stamp for a bit of of give that seems to be part of every stamp. 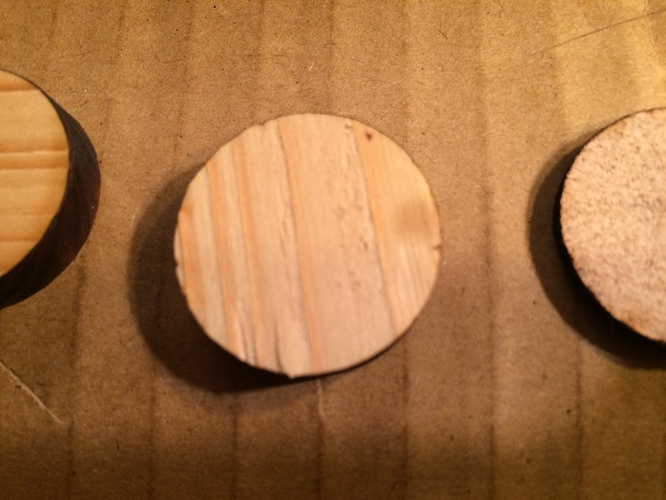 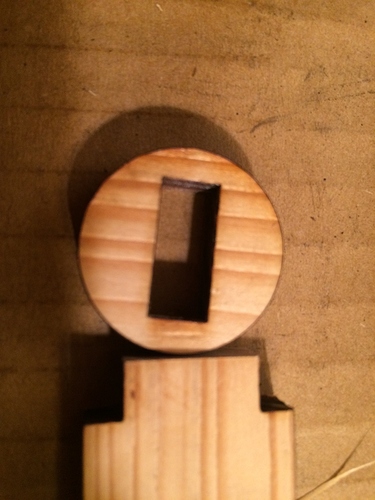 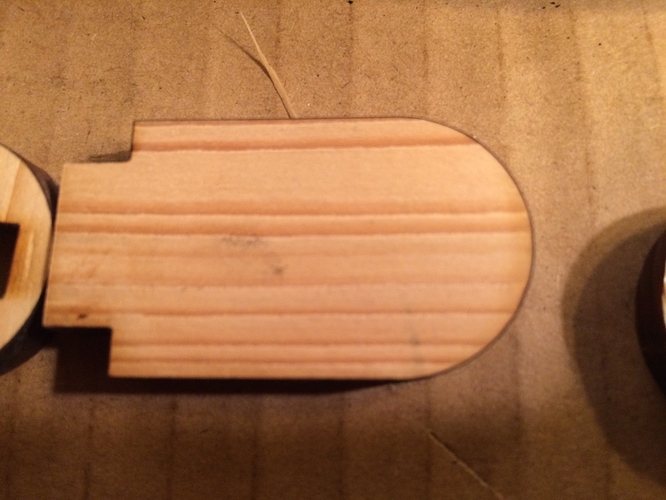 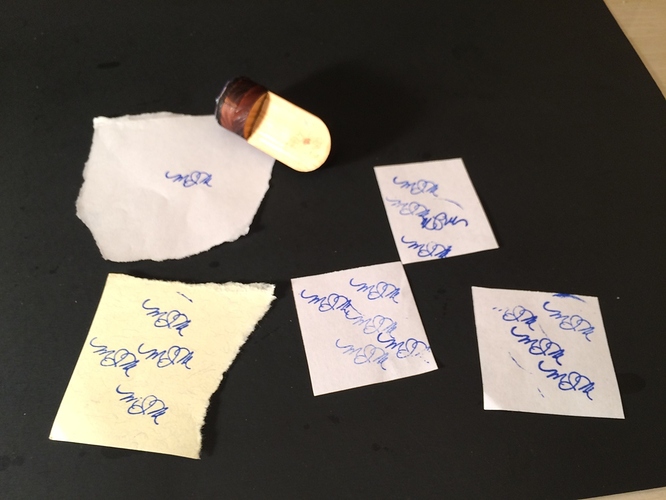 I trimmed a little around the edge of the rubber to give it a bevel. When I sized the engraving (I imported a separate bitmap for it that was 5 x 5" for a 600 dpi resolution., the edge of the engraved circle was just scant of the cut so there was a slight lip around the edge. Might be a good practice to engrave the edges a little deeper to be able to avoid edge prints. I know a lot of stamps have a border built in.

@cynd11 I am sure will be able to give lots of tips on how to make stamps, but this was pretty cool for a first shot I think.

110 Likes
Rubber Stamp Lessons Learned
Got Stamp Rubber Material - now what? :)
Can I make my own rubber stamps OR NOT
Bump on engravings
Lacrosse Ball
Weekly Highlights for the Week of January 1, 2017
jordanloshinsky January 6, 2017, 3:58am #2

Awesome job! Not sure what I want to stamp, but I want to make then now.

Man, you’re an inspiration! Your ability to go so quickly from idea to finished ‘thing’ is most exciting. Thanks for sharing your work with all of us.

Thank you for trying all different types of materials and your troubleshooting ingenuity. Great job!

So excited about this!!

Great application. May be possible for printing too.

I’ll give this instructable my stamp of approval…

Fantastic! Can’t wait to try it!

This is cool to see. I work for an ad agency that does a lot of event invites. So we buy a ton of custom stamps to dress up the envelopes.

Our production has been bugging me about when i’ll be getting the GF so i can start making them for him.

Thanks for this, @marmak3261! Custom rubber stamps is one part of the business model I’m planning for my Glowforge. Good to see a real world example showing what I can expect.

There was talk a while back of a rubber stamp mode. Does it exist yet?

I didn’t quite understand the topic way back in the fall of 2015. Now that I have engraved this stamp and looked at other stamps in the office, I know what you are talking about.

A quick question: Will the Glowforge have a Rubber Stamp cutting mode - where the edges of the cuts are slightly sloped to give fine detail extra strength?

The request is for the ability to make a slope from the surface of the relief to the base of the engrave so that each point on the engrave has a wider base for stability. The 3D engraving examples might be the best indication that something like this may be possible.

Here is another topic that discussed the issue of angled cuts regarding dovetails.

Somewhere around here people were talking about laser-cutting dovetails. I had an idea of a way it could be done so I thought I’d give it a try. Video below… Just like with the Stanford clips, I’d probably just stick with good ol’ finger joints (AKA tabs) since they work pretty good and are much easier and faster.

There have been many other threads that looked at this option, including one with @dan posting a stepped pyramid to show a layered relief engraving.

I can see how a tapered base would be helpful. At the moment my stamp has a narrow silhouette right down to the bottom of the engrave. Over time, I’m sure those narrow ridges would wear down.

Pretty cool. About how long was the engraving for the stamp? Think about for an event (say a celebratory group dinner or something at your parish) you could make custom stamps for each attendee as take-homes.

I can’t quite recall but it was under 10 minutes at that resolution.

SO FUN! This is going to be a feature I use a lot, and I’m delighted you showed us the handle you created. Again, you’re saving me a lot of future work. I could hug your clever self.

So that makes a small group of these a 1-2 hour project (and I am guessing doing them all at once is faster than each one individually). Can you get the ash off with compressed air to speed it up?

Thanks for doing this stamp @marmak3261. Stamps are part of what’s on my initial to-do list (stamps for teachers in our smaller school district with the mascot and stuff on them. I’m been curious to see someone try one out. Once again, your the man!

Are you telling me to get off my ash?

A small paint brush works very well. You can just blow it away with a good puff. It seems to collect on the upwind finished section of the engrave and doesn’t bother the point of contact with the laser.

I think engraving 1 inch diameter areas like this would be doable for a group of folks, but finding the balance with size of engrave, the resolution and engraving times is important while people wait.