Many threads seem to be being necro’d because of supposed editing today. Even some of my own posts are showing as edited today although when I look at the edit, I’m not seeing any.

The result is that these threads are now showing as unread for me and when I go to them, I’ve read every post.

A couple of examples I’ve come across…

Cell phone fix Made on a Glowforge

This is project #3. Project #2 needs a little bit of a write up.

I recently replaced the battery on my Nexus 6P. The phone is largely held together with glue, so this involves a bit of work with a heat gun, loosening things up. I overdid it a little on this plastic panel on the back, and made a little bubble where there’s a small void underneath it, and also somehow I put a crack in the panel: [IMG_6690] But, lasers to the rescue! Pew pew pew! [IMG_6701] This would hav…

Ceiling Medallion Made on the Glowforge Made on a Glowforge

Long time lurker, first-time poster. We just bought our first house this year and decided to make this ceiling medallion after unsuccessfully searching online for one that would work in our tiny bathroom but also not break the bank. Finished project first: [49025936_10218210681965399_2036606485978415104_n] The medallion is made from 1/4 inch plywood and designed in Illustrator in layers. Each layer was cut in half with a puzzle piece tab to make it easier to fit them together before gluing.…

Fixing Things. Or: The Forge Can Make Your Kids Happy

If you have young kids, you might know about how Home Depot hosts a monthly kids’ event, where they are given a free kit and make something (usually involves just a hammer, nails, glue, stickers & paint). The latest project was an Easter Basket, made from pine & a paper posterboard type of material; some of you may have made the same with your kids… Well, the face (and of course the ears) were made of that paperboard, and as y’all can imagine, those don’t last long with 2 rambunctious boys. O…

Edit: WOW this is getting annoying. SO many posts showing up as unread but they’re just supposedly edited within the past hour or so. What the heck?! I mean, some of these topics are years old!

Edit II: One of mine was “edited” by anna.robinson 2 hours ago. With no visible changes: Who REALLY runs the household?

Are all of the affected posts ones with images? It’s possible that Discourse is re-compressing the images or something.

I know that when you post something with a link to an image Discourse goes in and downloads a copy of the image and edits the post to point at the local copy. If they’ve made some change to how they store images then there may be a similar automatic edit happening with all the posts. If so that’s super annoying.

Yeah a couple of mine are doing the same. All edited by a staff member.

All edited by a staff member.

hmm… I wonder if Discourse has some kind of global find/replace that some staff member accidentally used?

over the last week or two I have been notified of at least four posts of mine which were “edited”, but no actual edits were made. The “edits” were made by someone who appears to be a new GF employee. Still figuring out how to use Discourse, maybe?

Hmmm, not seemingly true for all of yours - so I’m no longer sure, but that’s happening for a lot of them!

Are all of the affected posts ones with images?

Could be something like that, except it says an actual person made an edit. I think when Discourse does it itself it doesn’t name names.

made by someone who appears to be a new GF employee. Still figuring out how to use Discourse, maybe?

I dunno. These are YEARS old in some cases.

Could be something like that, except it says an actual person made an edit. I think when Discourse does it itself it doesn’t name names.

Yeah, the automatic edits for image downloading and stuff are clearly marked as being done automatically by the system.

What does the edit history show on these messages? (if anything)

What does the edit history show on these messages? (if anything) 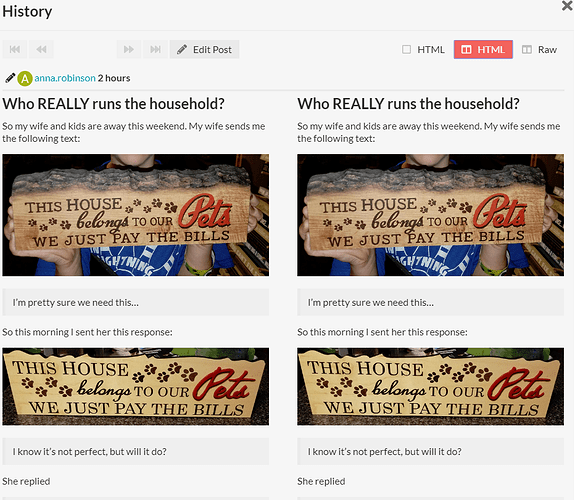 Here it is raw. I see literally no actual changes… 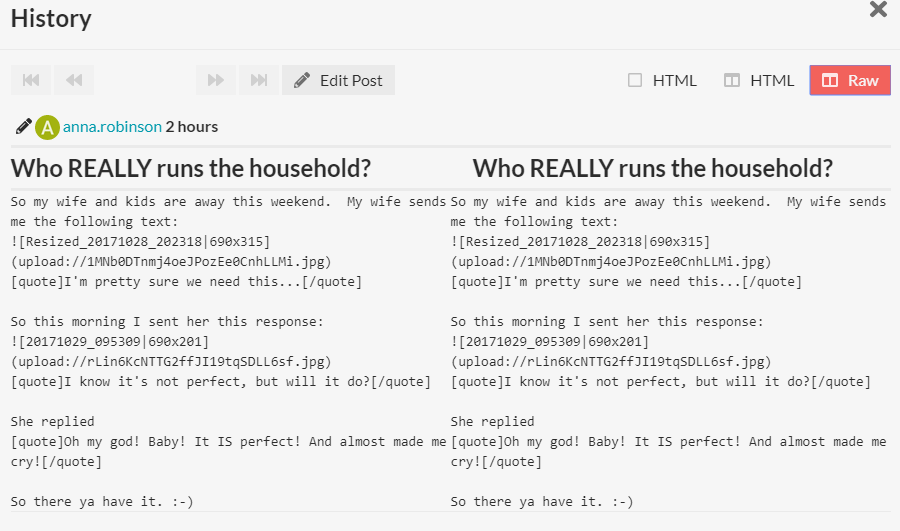 Well that’d be an interesting question to answer… Are they all ana robinson? 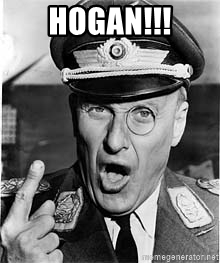 Wow. Does it make me really old that that was my go to meme?

Here it is raw. I see literally no actual changes…

How bizarre! I’m surprised that Discourse will even save a “change” if nothing is actually changed.

I’m surprised that Discourse will even save a “change” if nothing is actually changed. (maybe spaces were added/deleted at the end of a line or something?)

huh. Apparently it will actually save such a non-change. I just went and edited one of mine. I added a space on a blank line and then deleted the space. Then I hit the “save” button and it saved it as a new revision, even though there’s no change at all.

Apparently it will actually save such a non-change.

Lame. But still begs the question why anybody would be in Edit mode on these?

I noticed the same thing recently, and couldn’t figure out what, if anything was changed. I just ignore it now, but at least I’m not the only one. Maybe @anna.robinson can chime in. 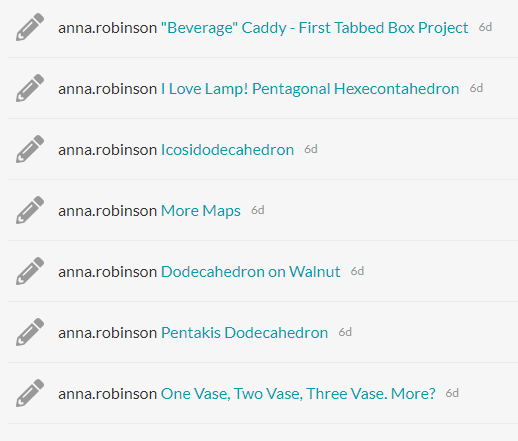 I noticed the same thing recently,

Oh, my. That’s a lot of annanisims.

There are a few more, those were just the ones that were sequential for a screen grab. I don’t think that anything changed on any of these that I can see.

There are a few more

Welcome to Glowforge! Here’s your first task… We’d like evebody’s unread message count to skyrocket. Please see what you can do about that.

I suppose I should say, to Anna who does not know me… I’m totally kidding. I don’t care if it was on purpose due to some practical function, or some complete accident. Nothing against you!!!

p.s. Some of those folks are getting cocky about how many posts they’ve read - knock 'em down a peg or two!

I had my unread count finally below 7,000. Then they skyrocketed. I thought it was just a mass closing of topics, but realized it was something else.

Does something like this mess with the ratio for reads for staying regular?

Sisyphus, thy name is Anna!

And totally in a spirit of fun!