I need a rubber stamp with my name and title on it to help speed some documentation at work. I picked up a sheet of “low odor” rubber from Johnson Plastics and got to work. The item number is RUS001 if anyone is interested.

The first thing I learned was that “low odor” is a subjective term. VERY subjective. Other than that, the material itself was good and consistent. I did an “R” (and then flipped it horizontally) to test it on inkscape, and it was pretty easy. I used two different colors, and the GFUI wanted to engrave them both. Since they were different colors, the GFUI wanted to engrave them in different steps, so I just told it to ignore the step where the “R” itself would be engraved, leaving only the other step which cuts everything BUT the R.

For settings, I found another post here from earlier and found the settings worked pretty well. I used 70% power at 340 speed, with two passes. To cut, I used full power at 200 speed, and I got a nice clean cut.

Attached some photos so you can see how it came out. Make sure you are well vented, or maybe try the “No odor” variety of material, because it smelled like, well, burning rubber… 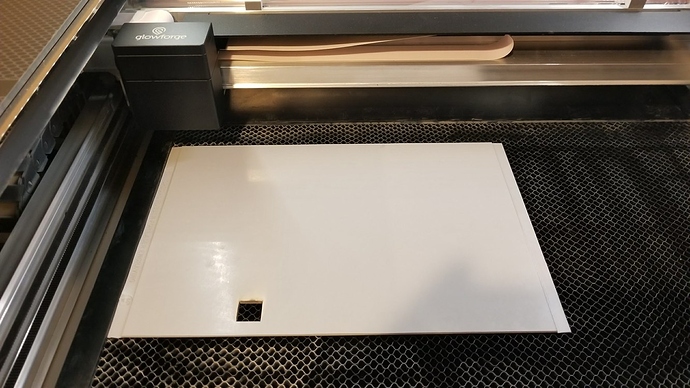 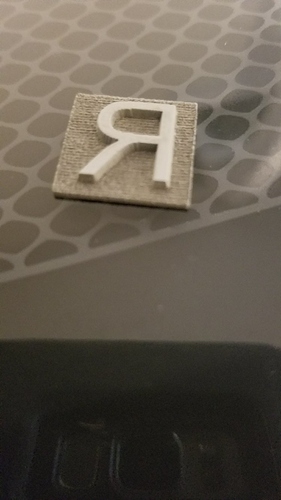 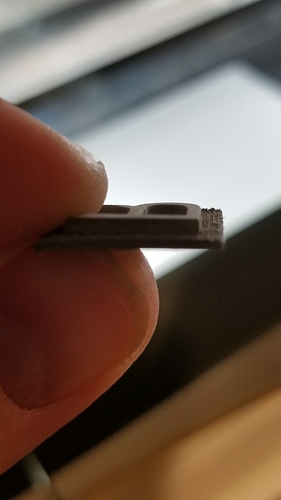 That depth is perfect! Nice work! Thanks for the settings and item info. We really should have an easier way to document those.

That’s mainly why I posted. I had some difficulty finding settings to use as a starting point, so I hoped others would find it helpful. I mean, who doesn’t need a stamp?!

looks amazing, is it really necessary to cut that deep?

Now, if in the future you want to make stamps with really thin lines, keep in mind that you would need to create a greyscale image with a ramp to white (unengraved surface) so the base of the figure (next to the engraved area) would have some support. Otherwise the thin parts would wiggle when you tried to stamp them. I hope this makes sense.

It totally does. I’ve actually used the exact same technique to create what you just described. I didn’t post it here because it has a lot of personal detail, but it’s done without the type of gradient support you describe. If it wobbles when I stamp, I’ll try the greyscale ramp you’re describing and update the post. Based on Leahgee2’s input above, it may be that I don’t need to cut quite so deep as well. Nothing teaches so well as failure :^)

And for those who want to learn from other people’s experience as well, I’ve linked to posts below. Note that settings in earlier posts may not be applicable because of changes to the power settings over time. (Links to ‘Beyond the Manual’ do not display the same way as links to ‘MOAG’.)

A lot of this started in the ArtPrint Linoleum thread, but thought it would be wise to move to its own topic for Grey/Gray Low Odor Laser Rubber for Stamps. ( Post with links for buying ) Settings I used on a Pro GF to produce successful stamps: Engrave Speed: 220 Power: 60 Greyscale: Vary Power Min Power: 0 LPI: 270 Cut Speed: 185 Power: Full 1 Pass (edit) These are the settings I use now that are pretty successful for me(end edit) It makes a lot of white powder that turns into flames …

Update on laser polymer stamps Beyond the Manual

Today is the first time I’ve tried engraving laser polymer stamps since my first adventures, when power settings were very different. I thought I’d revisit the process using the new settings, and let me tell you they work great! First off, the settings for Art Stamp Laser Polymer that gave me good results are as follows: Prepare your file as a raster engrave rather than vector engrave, to get access to the Vary Power function. Do three passes of Speed 1000, Power 100, Greyscale setting Vary …

Another Rubber Stamp, with support Beyond the Manual

Here is a stamp I just did. Was really pleased with the results. [FullSizeRender (1)] (All I had to test was an old dollar store ink pad) [FullSizeRender] Stamp is .75" across, the letter width in the “.com” is .010" ! The rubber I used was .060" thick and is a medium to hard durometer(I had it laying around) I prepared the file in InkScape. I brought in my logo, changed it to white and put it on a black background, then I duplicated it (Cntl +D). Next I increased the stroke width an…

Pre-Release | Mother's Day Part 1: Make a Card Made on a Glowforge

Hey! It’s getting close to that time of year. Mom knows I have a Glowforge so I’m sure she is expecting great things this year. Both of us are rabid cardmakers (she’s 83 mind you, but she still has to have the latest card tool) so of course the card is my first focus. I saw a card done recently (it’s this one if you’re interested) that I wanted to reproduce, in style anyway. But not having that particular stamp set, I decided to start from scratch. First, the final result, then I’ll docume…

Pre Release | Art Stamp Laser Polymer Made on a Glowforge

It was a busy day at the 'forge today. We had breakfast guests and I wanted to demo my GF. They were all rolling eyes and “oh boy, she’s got another geek toy, we’ll humor her.” Everybody trooped downstairs after breakfast and they saw my samples and saw the possibilities. Starting to get excited. Then we whipped out a few quick items (a duplicate of the parametric box from @mpipes; a custom cake topper for a 40th birthday my sister was making a cake for). That’s when they really got it. I…

I got a sheet of low odor rubber from Laserbits (along with a few other types of materials that await testing). I have no experience making rubber stamps other than taking big rubber bands in junior high and using an ink pen to write my name backwards on to make a quick stamp for wasting time in math class. [image] @dan requests that I do projects as separate posts so that they are more easily tracked and studied by everyone; however, I’ll just stick an update and another example of a stamp he…

In testing my real stamp (the one with all my personal details on it), I found it did wobble a little, but with even pressure it worked very well. That said, I’m going to cut another this weekend with the font bolded so the letters themselves are thicker. With this particular rubber anyway, I do not feel the gradient support is necessary. Your mileage may vary.

Thanks so much! My next project will either involve rubber stamps or wood block printing. This is helping me lean toward rubber!

Well done! Just received my Glowforge recently and am interested in making some rubber stamps. What is the best design software for rubber stamps. Are there any tutorials available to help me get started?

Thanks for the info. Learning Inkscape now.

Thank you for the settings.
All worked perfectly!
2 passes are essential! 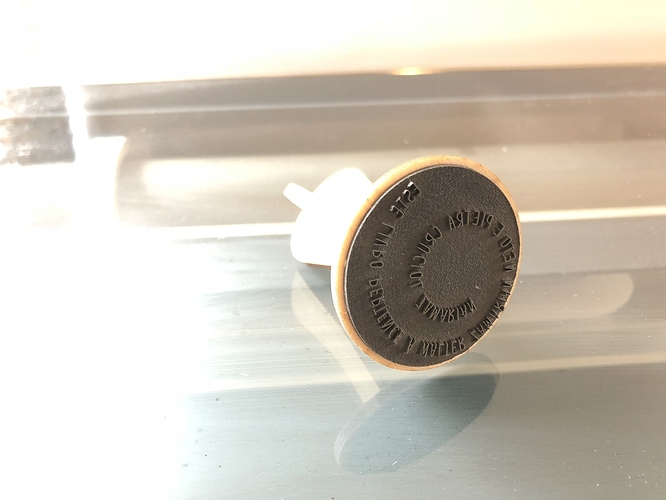 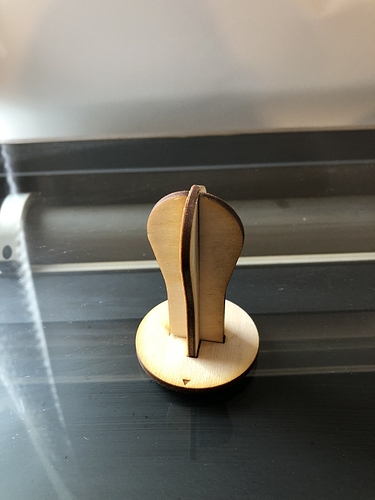 Made that to my sister in law to stamp her kids school books!

It says: “This book belongs to blah blah and blah blah”

long thread with lots of info. What material and settings did you end up using?

Hi there, I’ve used this material: 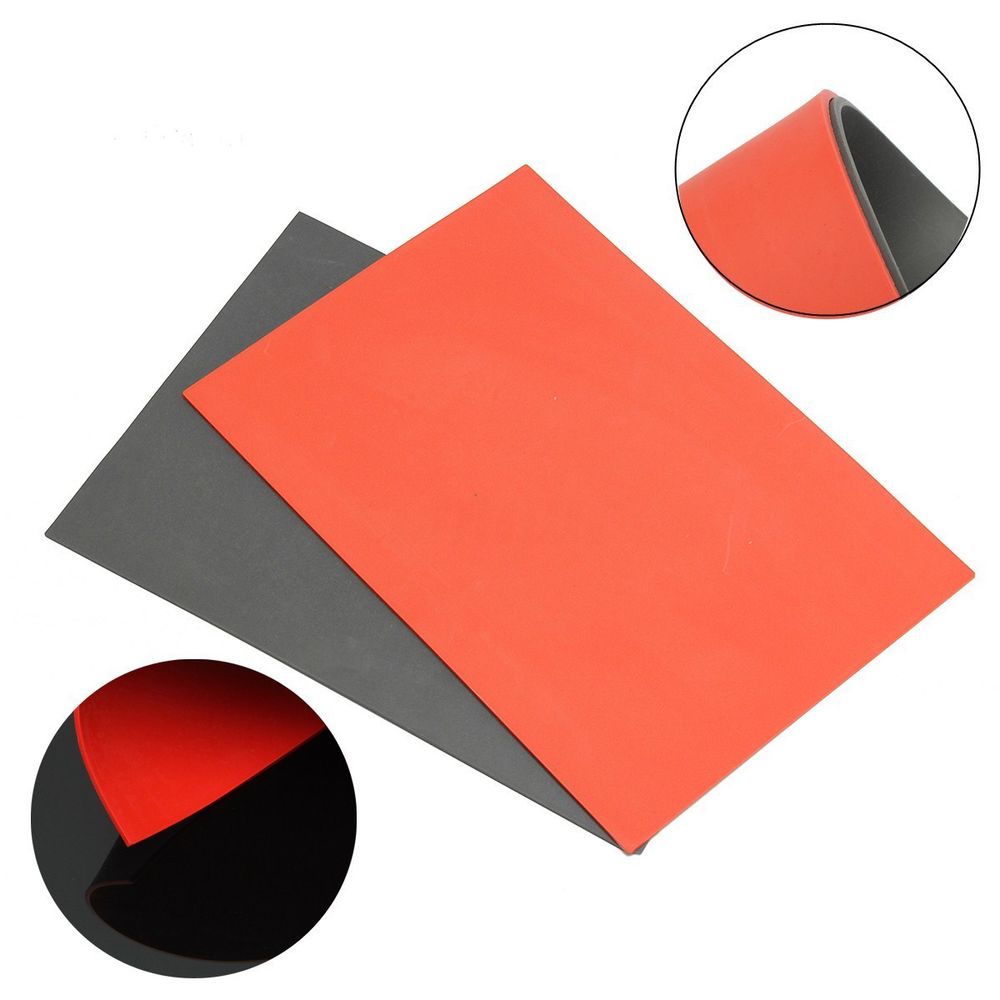 And used the settings he mentioned, worked perfectly.
For the engrave and cut I did two passes ! (the cut just to make sure) or you can try reducing the speed of the cutting part.

I see that though it’s Chinese origin, they say item location is GB, and a delivery in three days.
Is that your experience, with a quick delivery ? I’m assuming your UK based because of the link !
John