Some geometry with big names

I bought Tony Wright’s GF last fall but didn’t have a chance to use it due to a bit of spousal paranoia (plus I could just use the one at work), so I’m happy to report that it survived the move to Austin and is running great. No smoke in the house at all, wife is happy.

I finally got a chance to try something I’ve been thinking about for a while. Previously I’d made an icosahedron and a dodecahedron (20- and 12-sided polyhedra), and I was curious how they’d work as spheres by rounding the edges. Then it hit me that since they’re duals of each other (one has its vertices where the other’s faces are and vice-versa), the edges are perpendicular. That means we can make a composite of both shapes, with the edges notched and slotted together. After a whole lot of futzing around trying to remember how to Inkscape then only about ten minutes cutting but then a lot of figuring out how to put it together, here it is! 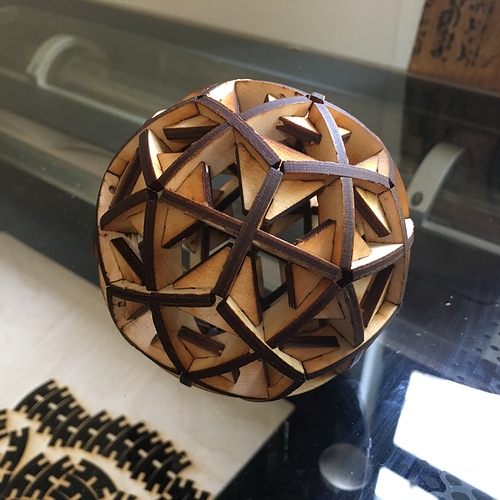 It’s a deltoidal hexecontahedron, says Wikipedia, 60 kite-shaped faces. It uses 30 each of the short and long edge pieces, 20 triangle connectors, and 12 of the pentagonal connectors. I used Woodpeckers 3 mm Baltic Birch, so the slots are tuned to that, 2.9 mm at the mouth and 2.85 mm at the back. I did my previous shapes in Proofgrade Maple and 3.0 mm slots gave a good fit. 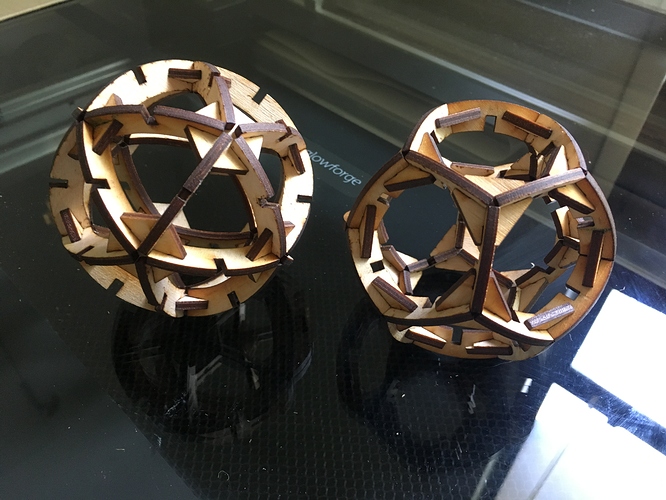 I originally tried to put this together by building the icosahedron first then the dodecahedron on top of it and snugging it together but I couldn’t get the edge pieces flush with each other. I need some kind of L-shaped thing I could poke through to pull from the other side…? Can’t think of what I could use for that. So instead I paired up the long and short edge pieces first then built up the shape as loosely as possible and snugged it all together once everything was in place, a bit at a time all the way around. If you tighten it up as you build it’s impossible to get the last pieces in.

Playing around with the pieces I also found you can tile the sphere in a slightly different way, with just short edges (after running off 30 more of them): 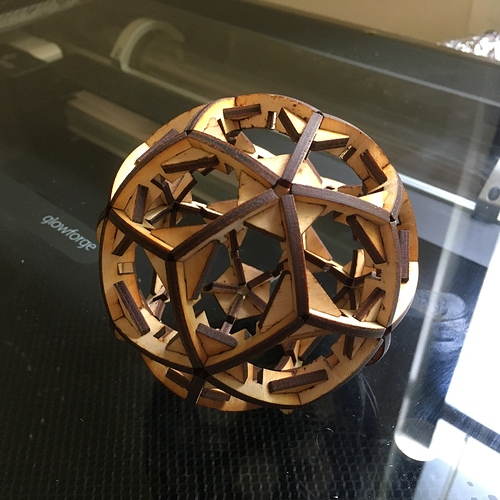 This one’s called a rhombic triacontahedron, 30 diamond-shaped faces. The triangular and pentagonal connectors are arranged in the same way and the edges go between them without any crossing. The short edge piece isn’t exactly the right angle–should bend by 36 degrees instead of 44, if I recall?–but it’s close enough it works.

There’s a chance you might be totally off your rocker - but you make cool things!!

Rhombic Triacontahedron Made on a Glowforge

I’m still sinking down the polyhedron rabbit hole… [IMG_2911] The sides are each 2.5" and the whole thing is just a tad smaller than a soccer ball. EDIT: See Polyhedra Starter Kit for the basic shape and connector.

My latest polyhedral is a Deltoidal Hexecontahedron. 2 layers with the top being cedar, and the bottom birch. Biggest one I’ve created so far, measuring at about 14 inches in diameter. I made a 3D printed stand for this, as well as a plan to add a LED light globe for the inside. I need to rewire the light so the switch and charging port are accessible. I think I’m done with polyhedrals for a while. [deltoidal%20hexacontahedron%20standx1920-100] [Deltoidal_hexecontahedron_1920x-1] [Del…

These are awesome. Very cool. Jealous of you guys who can figure these out with only using the laser cutter. All mine use 3D printed internals.

This is awesome! Also, don’t let @evansd2 fool you; he’s the one who got me started on polyhedra!

Truncated icosahedron time Made on a Glowforge

Incoming transmission: We are trunc. Surrender your thumbs and we will let you live. [image] Time for a polyhedron, it’s been a minute. Not much more that I haven’t said about geometric projects before, but a few quick facts and stats: This is a variant on a truncated icosahedron. It probably has some crazy name but I can’t say for sure what notation is correct for the symmetry. No glue. 3mm Baltic Birch ply. 180 connectors, 450 arcs. 630 total pieces. Cuts on about 1.5 full 12x20 she…

Very neat! Reminds me a little of these little circles with triangular folds inscribed on them that we used to glue together into shapes.

You could make your connectors longer, and then add a triple of 60 deltoids, and why stop there? Chances are you could keep making shapes that fit the voids and your model to get larger and larger.

If my GF weren’t in Seattle at the moment I’d probably have already tried it.

Newest geometric builds Made on a Glowforge

If you’ve seen my other posts on this family of builds (I call them my “creatures”), these aren’t he most complex models but I do like them both. The larger one is the physically biggest model so far. (Even bigger than the one you have, @ylene ) [image] [image] [image] [image] [image] [image] Notes: I assume the pictures will upload out of order. Stupid discourse + iPhone combo. Apologies for the lack of banana, I need to go to the store. As always, no glue was harmed during the ma…

For completeness, here’s an edge piece for the rhombic thingahedron so it’s the same size (~88mm in diameter) as the other one:

It’s not symmetric because the pentagon side doesn’t go as far as the triangle, so the sides are marked. 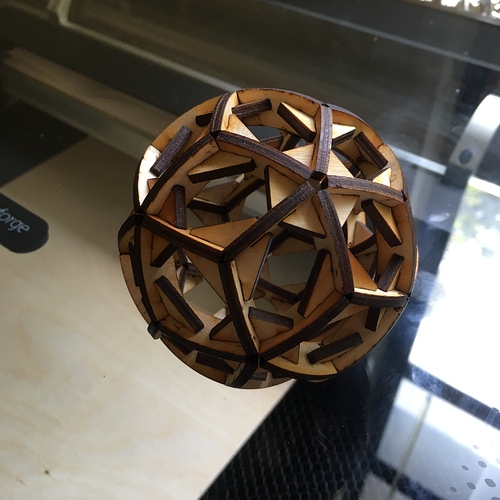 I’ve had this in the back of my mind for the last year, finally got some free time to build it! 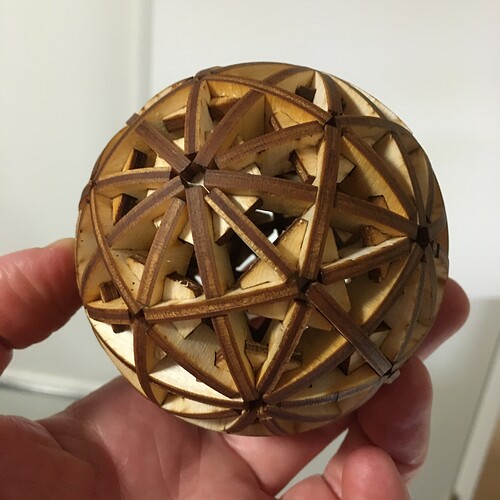 The added bit, sits on the flat sides of the triangle and pentagon connectors:

And finally: My first run of those edge pieces were too snug for the plywood we’re using now so I had to run it again with the slot a little wider. I can’t throw anything away without seeing if it has a use, so I discovered you can make a ring out of them: 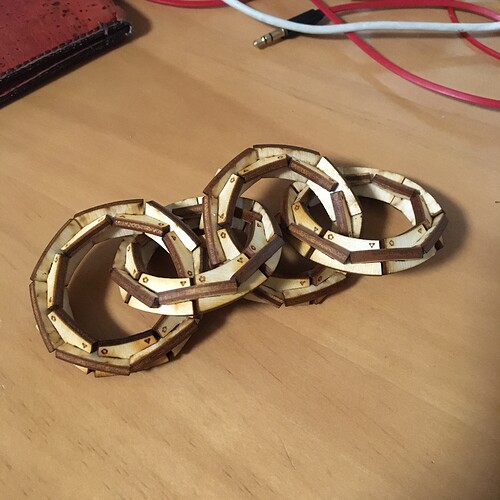 It’s been way too long since I’ve had a chance to play with the laser toy.

I bet that one was tough to assemble, that’s a very tight design!

with the slot a little wider

"Parametric" design in inkscape Everything Else

No one: Evansd2: What’s that?! You want a super long Inkscape hack post? ON IT. So before I begin: This post in intended for people who are pretty familiar with Inkscape. If you don’t know how to modify nodes/paths, use clones, or rotate a guide, chances are you aren’t the target audience. That’s not to say that there isn’t something for everyone here, but just keep in mind that this isn’t intended as a beginner’s guide, so I will be moving quickly. My goal: take an older tab-and-slot de…

I remember seeing that last year, skimmed over it to get the concept and I’ve been meaning to go back and fill in the details. Thanks for the reminder! I don’t think it would help me much here because I’m cutting the pieces out of scrap plywood, uploading just the individual shapes then duplicating and arranging them in the preview. (And wow, the preview is way more accurate than the last time I used it. Thank you Glowforge!) But if I wind up making full sheet layouts I’ll definitely use this so I can tweak the fit without having to rebuild the entire thing!

I turned it into a sort of stellation by straightening the edges and poking out the kite-shaped bit so the pentagon side has a flat face: 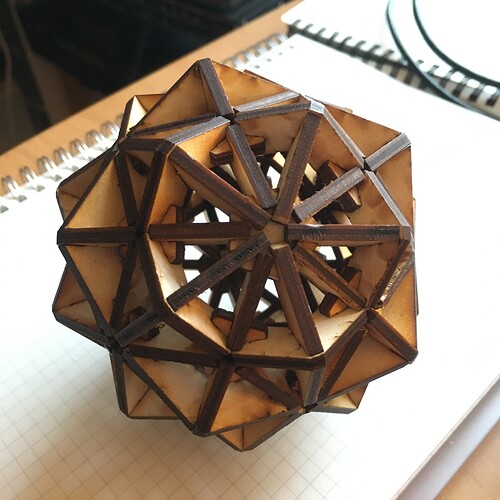 That almost makes it a Compond of Five Octahedra but the edges of the octahedra aren’t quite straight.

Here are the pieces: 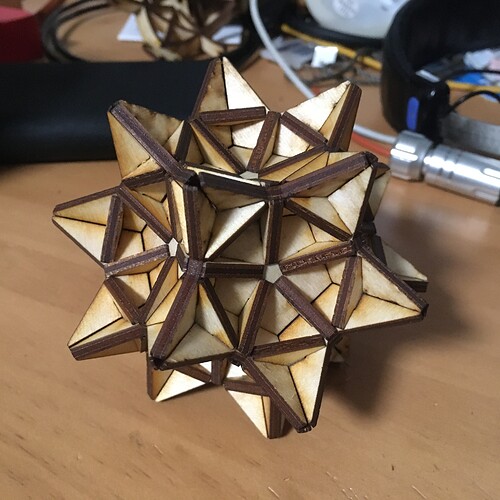 You know I love me some polyhedrals. Awesome shapes, they are all interesting and fun. Getting that last piece to fit must be challenging!