For over a year, Trogdor and then Arges were ventilated with the tried-and-true dryer hose out the window method. My workshop is in the basement, so the only way to vent outside was out through a window well… 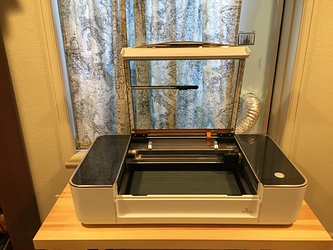 For a variety of reasons, I wasn’t 100% satisfied with this setup. Do you know how hard it is to make an egress window air-tight?

Over the past few months, I decided that exhausting out and up past our roofline was the way to go. Not only would it keep the exhaust away from our (and our neighbor’s!) windows and air intakes, by using an adjustable external-rated fan, the entire interior run is under negative pressure, so goodbye leaks! 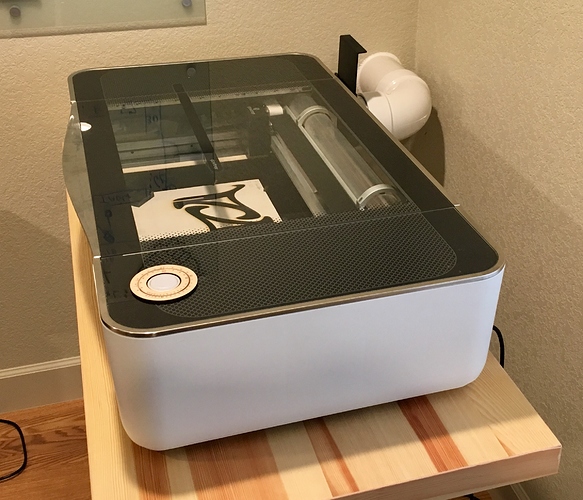 Those adjustable legs in the IKEA hack table really came in handy! 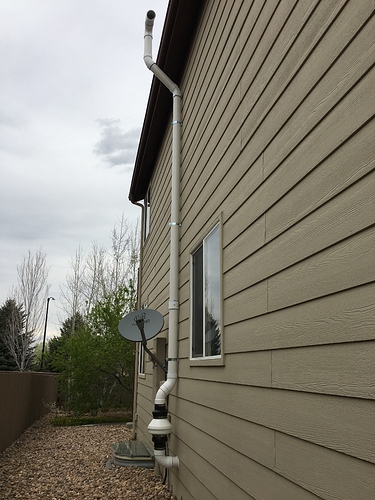 From the outside, it looks like any other HOA-friendly radon run in the area (It’s not painted yet, but it will be. From the inside of my workshop, you can’t even see the venting unless you peek behind the unit.

Initial tests over the weekend were firmly in the dancing-for-joy zone.

Absolutely zero smell anywhere in the house, and by keeping the fan running after the GF is finished, the system sucks out the residual smoke and odors, so even my workshop is now odor-free.

This of course will not work for everybody, but this is a real game-changer for me. Btw, the initial testing involved high-power cuts through cheap birch ply from the local big-box store – a material well-known to generate copious amounts of smoke and smell. After a new initial tests last year, I had pretty much given up on leather and bone. I plan to test these later in the week, but am really optimistic that the new system will work with these materials, too.

One thing I’ve learned after 35 years of marriage is that the key to a happy life is a happy wife. The grin on her face yesterday was well worth the effort.

EDITED: I forgot to give credit to @dnix1955 for giving me the idea for a PVC exhaust run.

maybe some day i’ll attempt something similar. especially if we ever get our butts in gear and renovate, adding a proper ventilation system for the GF will be a part of that.

I’m looking at revamping mine too, but it won’t be nearly that nice. Great job!

Heads up for you…

You might need to create a drip catch for condensate (and rain infiltration) to prevent Arges from getting an internal unexpected washing.

Does the external in-line fan address that?

Hard to see from the photo, but the outlet is actually a goose-neck facing south at a 45-degree down-bubble, which should address rain/snow. Not sure about condensation, but at least I have a blast gate in place.

Looks great! Oh, to have zero odor forging. . .
Any chance of birds or other critters coming in? Or do you have mesh over the end?

Nice Job! I need to eventually move to a more permanent solution eventually and so you’ve given me more to ponder. I was thinking of venting out at ground level right out of the crawlspace, but now… should I go high?? Hmmmmmm…

A vent that nice has to have a name, what do you call it?

do you have mesh over the end?

No mesh – didn’t want anything on which detritus could hang and block the flow. This is what my HVAC guy recommended as the no-rain, no-birds solution. Will treat the outlet with wasp spray as needed, but with 350 CFM blasting out (when needed), not too worried.

should I go high?? Hmmmmmm…

If you can, I strongly recommend it.

You could smell the exhaust all around (& in) the house when I vented at ground level.

what do you call it?

It’s great that you put the fan outside. No issues if the housing leaks!

Yup! Completely sealed and outdoor-rated for 7+ years of continuous use. Draws just under 1 amp at full tilt. I have a friend that’s had the exact same model running for ~15 in a “real” radon run.

Oh gosh. Would you come to my house?

what do you call it?

Moria comes to mind. All twisty and hidden like.

It looks like a Jeep snorkel. Your house is ready for some serious off-roading.

Cheaper than a glowforge filter and no consumables to replace. Very nice!

Great job. I’m still working on getting my machine out of the garage, this might work.

One thing I’ve learned after 35 years of marriage is that the key to a happy life is a happy wife.

I’ve been trying to get “happy dad, no one’s sad” to catch on, but it does seem to be working for some reason

Got a name/brand of the fan you chose?