Anybody got any good starter settings for scoring and cutting? (Really don’t feel like doing the whole “OMG!

After further testing and tweaking:

For a .14" corrugated U-Haul moving box in decent condition used once, the settings are:

Settings for Cutting/Scoring Corrugated Cardboard Beyond the Manual

My settings are slightly different that the final settings above, but as I’ve run into a number of people commenting that they still can’t do living hinges in cardboard and with the settings below I’ve never had a problem I thought I’d share - plus the engrave setting which isn’t above

Your mileage may vary.

Edit: The speed settings shown in the rest of the posts in this thread are the old scale settings, are much too slow, and might cause a fire if you try to use them as is. They must be converted to the new scale. Be careful or use the settings listed above.`

Chuckle! Might start just a little higher than that - I’ve done some work on paper and that won’t even mark it.

I’m thinking 30/50 might be a nice conservative starting place. (If I don’t come back - try to remember me fondly.)

so ya I was just being a tease

The type of cardboard is going to be a factor, i’ve been messing with all the spare boxes I have and it’s amazing how different they all react.

Example of these settings, though this was some thicker carboard that engraved nice and dark. 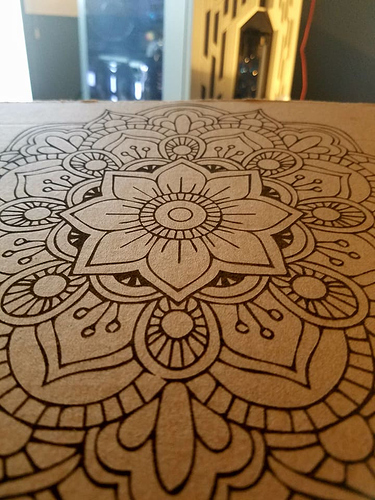 For standard shipping boxes, I’m getting good results with 100/130 for cutting, I’d start around 40/130 for scoring and play from there depending on how deep you want the score.

Wow! The ranges are all over the place, aren’t they? I wonder if it’s better to go full power and punch through quickly, or use less power at a slower speed?

Might be a good question for dan, but this is the non-monitored section.

I wonder if it’s better to go full power and punch through quickly, or use less power at a slower speed?

My rule of thumb is to use max power & highest speed possible (starting with 100/197). If that’s still too much (paper, cardboard, etc) then I leave speed at max and start to ratchet down power.

I think slower always gives more chance for burning / charring / melting, so faster is generally better. And if it doesn’t cut deep enough then more passes seems better than slowing down.

The only thing that gets worse with speed is the corner over-burn is more pronounced due to the longer acceleration period.

Wasn’t getting any corner overburn at the lower power and slower speed setting. I’ll give it a try at faster speeds/higher power today before making up the next boxes just to see how it looks.

This thing is pretty darned handy for making up little shipping boxes…so much quicker than the previous method of box cutter and ruler.

The UPS boys in Cali are giving your box that “Extra” Love before they send it to the Monkeys in Chelmsford. I had a buddy who worked there.

ya so both are on the truck it says… but the machine via tracking info still never departed cali so weird.

I wouldn’t leave the safety of my precious in the hands of some delivery person who is miffed he has to mule it upstairs. I’d be there at the truck with a smile and two helpful hands!

ROFL! And bells on…I think I scared our delivery gal when I met her at the back of the truck…might have been drooling a little.

Corner overburn is def still a thing at ultra low power, but it seems like they’ve minimized it for everything else.

Paper test from yesterday. If I worked for glowforge i’d switch gears and call this a feature, “insta round corners ™”. We’ll turn all your squares into lovely rounded corner squares no hassle! 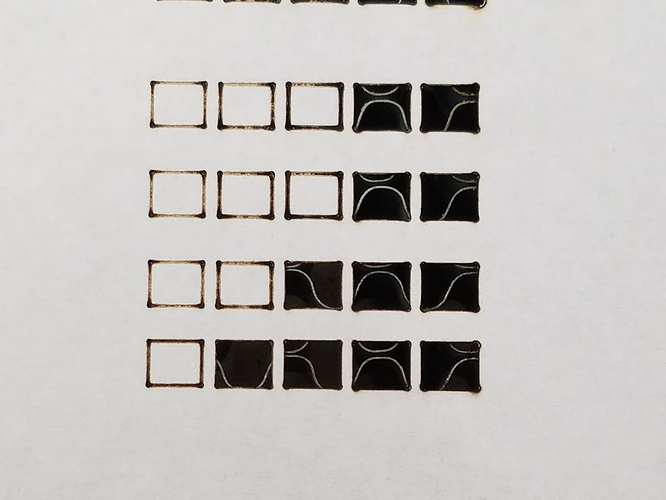 I think I scared our delivery gal when I met her at the back of the truck…might have been drooling a little.

I love a good laugh Jules! Thanks for that.