Isn’t that basically done by shoving your jig into a corner and spec’ing your file to the bed size?

At least for me the file is not being positioned reliably. Even large jobs are sort of stuck in the top right, and don’t appear to line up correctly. Remember line up within thousandths of an inch is what we need. And a jig only works if you can realign to the jig, which so far I have not reliably been able to do (haven’t even cut yet with this since on screen you can see you aren’t perfectly aligned)

As I recall, there’s a “fix,” where if you size your file to match the full size of the bed, the Forge will reliably preposition the artwork where it was before. @takitus will tell you more.

Yes, please!!! As a CNC user who is used to having things placed just so, I would give this all of my likes if I could!

Totally agree this should be included!
Just curious as I mostly am a CAD guy, does AI and other 2D vector programs have a 0,0 like cad?
I’m assuming no???

As for positioning in the workspace? AI does. You can choose one of 9-registration points for the object and then place it. You can also drag your rulers out to set 0,0 wherever you want in the document.

Ive been asking for this from day one, loudly and often. The 20x12 artboard hack helps a little in this respect, but numeric positioning, scaling, and rotation should all be included in the UI. Having to bounce back and forth to AI over and over in 20x12 mode, saving, re-uploading, etc is not the optimal solution.

I struggle with this almost EVERY TIME I use the laser. Ive lost a lot of materials to being unable to know where my object was placed in the UI, how big/small it was scaled to, and how much it had been rotated.

Its SUCH a headache to deal with not having this feature, and would be so easy to add. Ive looked at the code. Please add this.

some of my begging:

A little bit of give:

We built a quick little hopper item Everything Else

While we have a lot of work in the hopper to help with positioning, we did make one invisible but handy change now. If you upload an artboard or SVG canvas that is the magic dimensions 12x20, the UI will override its automatic placement of the contents and pin the top-left corner of the artboard to the top-left corner of the screen. This little workaround makes it easier to use jigs, if you so desire. I haven’t tried it myself, but something tells me @takitus will give it a whirl soon. …

A start, but we def need true numeric control, and 0,0.

This whole post started by @Duality has a lot of back and forth on it, definitely worth a read and bump:

Question for the GF team. @dan, will there be a physical XY zero / home position visible on the bed? Will there be a raised square guide to tuck material into? I like the image dragging / camera feature a lot but I can’t imagine we’d have to do a manual graphic design placement via the cameras for every instance of a repeated cut pattern for different sheets / jobs. For repeat jobs we’d like a place-press-go workflow! How would it work? Thanks.

and heres the little mockup of the fiducial homing square I posted on that thread that we could use as a dynamic home if they were able to use the head cam to get really tight accuracy. 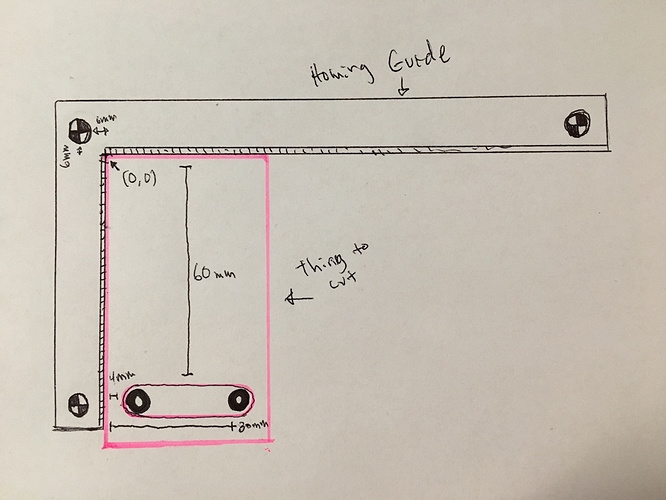 If you make an illustrator file with a 20x12 artboard, wherever you place your objects in that file will be where they are on the bed. I dont think this is a good final solution, but will help a little in making repeated objects.

I think people who are not used to machines don’t appreciate the importance of this (and seemingly nor does GF). But the lack of a known 0,0 and relying on an ‘aim & shoot’ methodology will cost a bunch of ‘mis-prints’ / material waste eventually for people.

Thanks for pushing it @takitus… I’m with you all the way.

I totally understand the simplicity of the drag and drop and I think this makes the most sense for the bulk of their target market, HOWEVER, a sizable chunk of their market, especially the pre-release sales are probably makers and an absolute zero is just gonna make sense to them and it does seem like it would be strait forward to implement, even if it is just an option in the settings.

I don’t know if there will ever be a 0,0 on the bed because the head is homed to the camera and there are no limit switches on the axes. How accurate are the lid hinges? Are they completely free of play so the camera always has a repeatable position relative to the bed?

I would prefer that the cameras find the work piece corners and automatically align the artwork to those by translating to the centre and rotating, plus an option to stretch to fill. I think this is far more in keeping with Glowforge’s way of doing things and is a actually a lot better than using jigs and having a 0,0. Also if you really must use a jig to position parts you should be able to drop it in anywhere and have the cameras centre your artwork relative to the corners of the jig.

Remember line up within thousandths of an inch is what we need. And a jig only works if you can realign to the jig, which so far I have not reliably been able to do

My rule of thumb for this is if I can take the jig and everything out of the laser, put it back in, and it can cut the exact same line/pattern, then its working as it should. If you cant, then its not.

but once I removed the physical pieces of the bed/jig and put them back in, the alignment was off, and by quite a bit due to the amount of play the bed has

This is bad news for any sort of jig/fixture solution we dream up.

What if you don’t have a 90 degree corner? (I’m thinking circles, triangles, and using leftover scrap that will be in who-knows-what kind of shape)

I need to take a very close look tonight at the innards, and see if I can 3D print a jig holder that grabs onto something more solid than those divots the bed sits in which I can use as a registration point. Glad you mentioned this, as I was sort of planning originally to fix the jig to the honeycomb with pins, like I can do on the wasteboard of my X-carve, but if I can make this work, I will share the file.

Which CAD do you use?

I totally see your point, but its fun to be an old curmudgeon too

The laser is absolutely capable of absolute precision with insane accuracy. That’s not the problem, it is that the bed can move slightly (unlike a CNC mill where the wasteboard is part of the frame) and so the 0,0 as is doesn’t reliably translate to accurate placement. As I mention above, let me see if I can 3D print something tonight.

I need to take a very close look tonight at the innards, and see if I can 3D print a jig holder that grabs onto something more solid than those divots the bed sits in which I can use as a registration point.

The back of the machine is locked in place. The front has the potential for a bit of movement due to the door so I wasn’t going to register off of that. I think the rear is safe. I think @Dan mentioned that as an alternative when I was musing on using something attached to the rear of the crumb tray frame as a backstop.

I like a lot of what youre saying. Goes along with the fiducial ruler/homing corner thats been discussed. I think the real key here to accuracy is having the head camera have the final say on whats 0,0. The lid cam can shift in respect the rest of the unit. Ive had a lot of issues with this already but some of those were pre-release issues.

If there was a registration point somewhere in the machine (top back left would be great) that the head cam could doubly home to, then we would always have a solid, repeatable 0,0. We could always reliably position relative to that.

The lid cam is great and has its place in making use of those weird pieces of scrap and a few other things, but I dont think its an acceptable solution for the true amount of accuracy we should be able to be getting from these machines.