I have a Pro unit on the way, and with the delay of the Air Filter unit, I’m looking at a third party option so I can get cutting in my office.

Another thread says the Glowforge air flow is around 200 CFM. 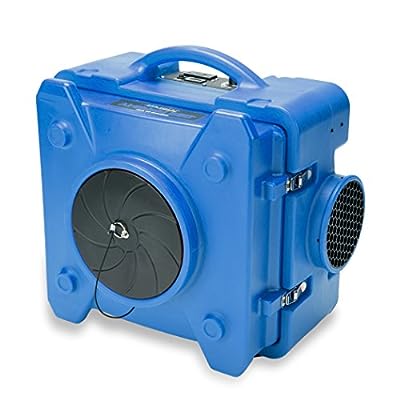 Does this seem like a good filter for a Glowforge? Are there other considerations I should be aware of? Or is there another filter that people recommend?

3 Likes
DIY Indoor Filter
No traditional window in my studio - creative solutions needed!
Getting lots of smoke leaking out of my glowforge
Air Filter Latest
Air filter deliveries
Etchings, Engravings, and Relief Prints?
Well I have a filter now
Make an airfilter?(Just need the smell gone)
Photogrammetry & The Dijon Mourners: An Experiment
Basket Weaving - not where I am going but
Needed : an interface from Glowforge to Filter
Loud vibrating noise
marmak3261 October 12, 2017, 11:03pm #3

It seems that all the discussion previous about home made filters or bought filters had both a HEPA for particulates and an activated charcoal for vapors. I understand that it is all a definition of particle size and I am not familiar with all the technical terms for what you would call the exhaust of the Glowforge. But it does seem that these are two essentials for a laser exhaust filter.

so you recommend this one and do you got have one

I’m also interested in a 3rd party air filter. Considering the 6+ month delay on Glowforge’s filter would be awesome to get an official recommendation on a 3rd party substitute.

Here’s what I’ve found so far…

The BlueDri seems to have all the important components: pre-filter, carbon filter (optional), HEPA filter, 250-500 cfm airflow.
With all the necessary filters, cost is close to $1,000.

The FSL100 is purpose-built for a laser cutter (albeit a different brand)
http://www.rockler.com/small-fume-extractor-for-full-spectrum-lasers
It’s got the pre-filter, carbon filter, HEPA, and 210 cfm airflow.
Cost is $1,100.

BOFA has a good reputation, but from what I can gather, their filters are closer to $2000.

Anybody out there have experience with any of these options? or other recommendations? thanks in advance!

I bought one and they are a lot bigger than they appear in the picture we will see if I can make it work.

Did it work? How’s the fan noise?

I still have not worked up something that can hook directly to the Glowforge exhaust so I shoved the exhaust out an open window and turned the filter on for general cleaning against whatever leaks, or blows back in the open window, but not connected to anything.

It certainly does a job as if not on there is a lot of smell and the noise is tolerable and not a lot more than the Glowforge itself but I leave it running till well after the Glowforge finishes, and between pews when I expect to be firing again, so it is the main sound and the Glowforge is episodic.

I need to do something about a filter sooner than later. My neighbor is gonna hate me after this upcoming week - I’m going to be cutting black and mirrored acrylic almost exclusively until early next week, and those both smell horrible.

I talked with Johnson Plastics about a BOFA Access, but they seemed to think it’d be undersized. Unfortunately the size that’s a step up from that is almost $3k.

I bought the one in the OP and while figuring a direct connection from 4" to 10" has not been accomplished I leave it running in the room and It does the job fairly well. I have a goof grade arrangement to shuffle much outside, but a lot of it does not make it.

For one-time use (at a Maker Faire, where I couldn’t vent) I used an agricultural filter. They’re pretty cheap (under $100 on Amazon) and while I’m sure they’re not very good compared to a serious filter like the ones posted above, it was good enough that the people around me didn’t complain about the smell from the laser cutter.

I wouldn’t use it for in my house - I don’t think it’s that good.

Go figure - just as this has been at the front of my mind lately, last night our neighbor complained about the smell. Not surprised though as I was cutting black acrylic for 8+ hours over the course of weekend. (that stuff stinks!)

I was looking at the smallest BOFA filter which is $1500 from Johnson Plastics, but it seems like it might be undersized for as much as I’m lasering all the things and I’d be burning through filter media, which isn’t cheap. BOFA is suggesting their Advantage 1 filter, which is upwards of $2800, but the nice part is that it’s meant to be a base for a laser so the GF could sit on it. I got a quote from Fumex for one of their units and that was $2800 as well, plus it’s just a tall unit. I’m space-constrained so there’s some value in using it as a base and not having to find a location for an extra mini-fridge sized piece of equipment.

The filter in the OP is not cheap at $639.00 & free shipping. but it is compared to $2,800, and it works with the intake to the side or facing up with a 6" exhaust and 10" intake that has been my biggest problem to make that connection. Facing up it would fit under the Glowforge if under the table or something, Meanwhile, the Glowforge exhausts badly to the outside, and there is considerable smell and some smoke that gets inside, but not so much with the filter just sitting there drawing air from the whole room, There is some noise particularly at 500 cfm but more like white sound that you notice most when it is turned off, At low speed it is about as loud as an idle Glowforge.

Since I am venting out of window and only using my GF once in a while, i am goin g to try the agricultural filter and see if it will be enough to have my neighbors not hate me for lasercutting

I am venting out of window

Since out-of-doors tends to be much larger than indoors, it takes a lot more stink or smoke to even notice in most cases; but only a carbon filter will deal with the stink that would be most noticed . Even then unless you were cutting leather or Acrylic I have not seen much to notice most of the time.

Did anyone have an update to their 3rd party air filter? My neighbor has complained about the smallest wood projects I am cutting. Glowforge told me it will be a few more months for theirs. I am looking at these on Amazon: 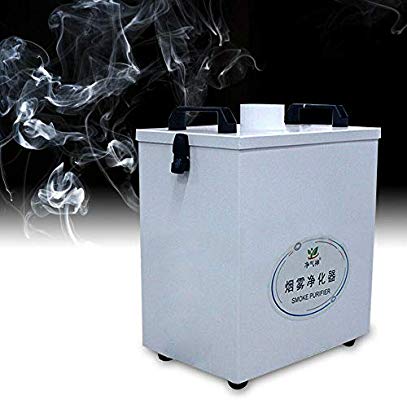 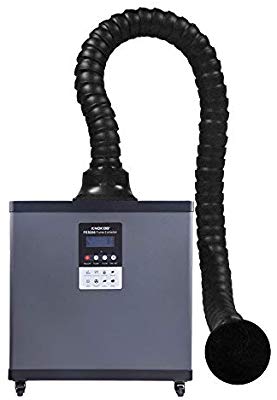 ANY help is SO SO SO much appreciated.

I’ve gone 3rd party at this point. It wasn’t that the Compact Filter was bad, it actually worked quite well, but the cost per minute was too high compared to larger units. The CF is great for the occasional project or taking the unit to a maker faire, but not 30-40hrs of cutting a week.

I did a lot of research and am now using the BOFA Oracle IQ. It’s roughtly 1/2 to 1/3rd the cost per minute despite the cartridges being 2x the total cost. All of the small units like you listed tend to have high priced cartridges for what is in them, many higher priced than the Compact Filter.

People also kick around the idea of things like the Blu-Dri systems, but those don’t really have the 10+lbs of carbon you need to filter the fumes.

We were told by several companies such as BOFA and Purex that air flow is to do with bed size and the Glowforge needs 350-400 m3/hr.

We have bought a Purex Alpha 400 for our Glowforge Pro. The reason we went with the Purex machine is that the only difference is the machine is analogue/manual vs being digital/automatic so you have to check the filters once a week to make sure they aren’t clogged instead of the machine telling you this. Besides this there is no difference, this is even what the engineer at Purex had confirmed about the machines.

I also was told by customer service that the Purex 400i is what they used to test filter units on the machines before they had the compact filter units.

Hope this information can help someone

I was thinking about that and that would be about right for an exhaust fan. Then it occured to me that the filter will pull its declared volume when brand new clean, but the volume will drop as the filter fills so even if it pulls 1000 m3/hr at first it will be pulling 300 m3/h by the time you break down and spend a few hundred dollars on the new HEPA filter.

Yeah that is true, that definitely is the case. Think the breakdown depends on material use in the machine also. So we don’t use MDF for example as this clogs filters far quicker than wood or even plywood.