I want to create something out of 1/4" solid mahogany. From a quick search on here, it seems that mahogany seems to flare up and catch fire. Any tips on settings and passes? Or should I just pick a different wood?

The support team can’t give recommendations on non-Proofgrade material settings, so I’ll move this to the Beyond the Manual section for you so any customers who might know the settings can give them to you. (I’ve never tried it, but I’ll bet someone has.)

It’s been a while since I tried, but the 1/4" mahogany that I had just didn’t want to be cut…

You’re going to need a lot of passes (over 20, most likely) at high speed and possibly reduced power to avoid a charred mess. I’m going through the same thing right now with 1/4" zebrawood. My first try, with 15 passes, resembled charcoal by the time I got all the way through. My second attempt, with 21 passes, is slightly better, but I’m trying again with 30 passes (and lower power) tomorrow.

Snapmark is proving useful. It allows me to take the piece out, examine it to see how far it’s cut through, and then put it back in the machine for the next set of passes. It does take a while to re-align it to the Snapmarks each time, but it’s worth it.

I have just today run several tests on both Mahogany and Zebrawood, On the piece from Ace Hardware, one pass at full power 160 zooms it cut in one pass, The other two pieces did not cut through but burned. Given that Mahogany will burn when heated, and a little char will lead to more, having a great many passes IMHO is a losing game. I am not sure you can keep the smoke from burning as even at 300 zooms it will flare. what you can do is reduce the effect of that flare at burning where you are not cutting, as once a coal gets started it tends to continue,

One way to do that is a strong masking that will keep the flare away. If you are engraving however that does not work. In that case, I did multiple engraves (like 4) but soaking the wood with water before each pass. As long as the wood is wet the flare will not burn it, but the cutting point is so high it has only the slightest effect on the cut.

I have long thought that if it came down to it dry ice in the crumb tray would lower the oxygen content and prevent burning, but I have not been desperate enough to try that yet. When I use up the mahogany I have I don’t think I will be buying more. Zebawood is similar but not quite as bad.

Or should I just pick a different wood?

My mind keeps playing crazy editor Like " Engrave and Cut 1/4" Mahog. Any tips?"

My results on 1/4" zebra wood, which I believe is a somewhat similar challenge to mahogany (although perhaps not quite as bad):

Note: this is on a Pro, so Full is more powerful than Full on a basic.

Those were the two that I referred to as charcoal yesterday but they actually ended up cleaning up well. And I hadn’t yet seen how much worse they could be.

Note: remaining tests had a sacrificial piece of chipboard under the wood, to minimize the flashback which appeared to be responsible for some of the char.

At this point I decided to work on a two-sided cut using Snapmark alignment.

That last attempt is a real winner. Not too many passes and manageable charring. Plus the profile is more like (_____) whereas the single-sided cutting produced a cross section like this: /_____\ (The difference is subtle, though, so probably not important in most cases.)

I’ll be trying it out for real on a project next week (and perhapsI’ll try to write up a tutorial for 2-sided cutting using Snapmark) but I’m feeling a lot more confident about my success now.

It’s only had minimal cleanup and could certainly still use some more work. Here you can see how much darker it is than the un-lasered wood: 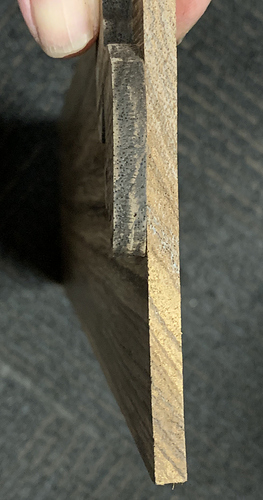 Anyway, this isn’t mahogany so it might not be helpful. But I will say that I’d probably try more lower-power passes rather than a few really strong ones.

This is the test I run on every new wood species and often on several to test what I want to actually use. but this first test runs the engraves at twice the number noted and then comes back and makes the cuts at the numbers noted and then cuts off the piece at two passes at 125 all full power.

Watching closely while it is done allows me to put a wet cloth on after it cuts in the case where it starts to make charcoal,this is the Zebrawood piece after sanding it as the cut is deeper and burns more where it hits previously cut places (in any case, not just this wood)… 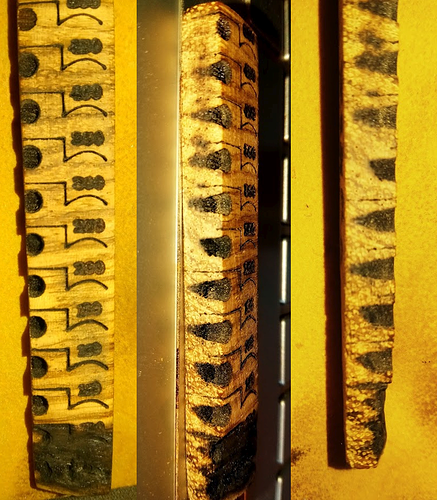 I ran another test on an unknown wood I suspected was Zebrawood but I re-arranged the cut sequence to do the engrave first and then the cut for each different setting and doing the final cut before the last two. in this way, there was less time for the charcoals to burn,

Of perhaps more interest by cutting across the engraves first, it hardened the wood on each side and the engrave only cut 1/3 of the total distance for fresh wood!
This could be why multiple passes are not as effective at cutting as the first pass. 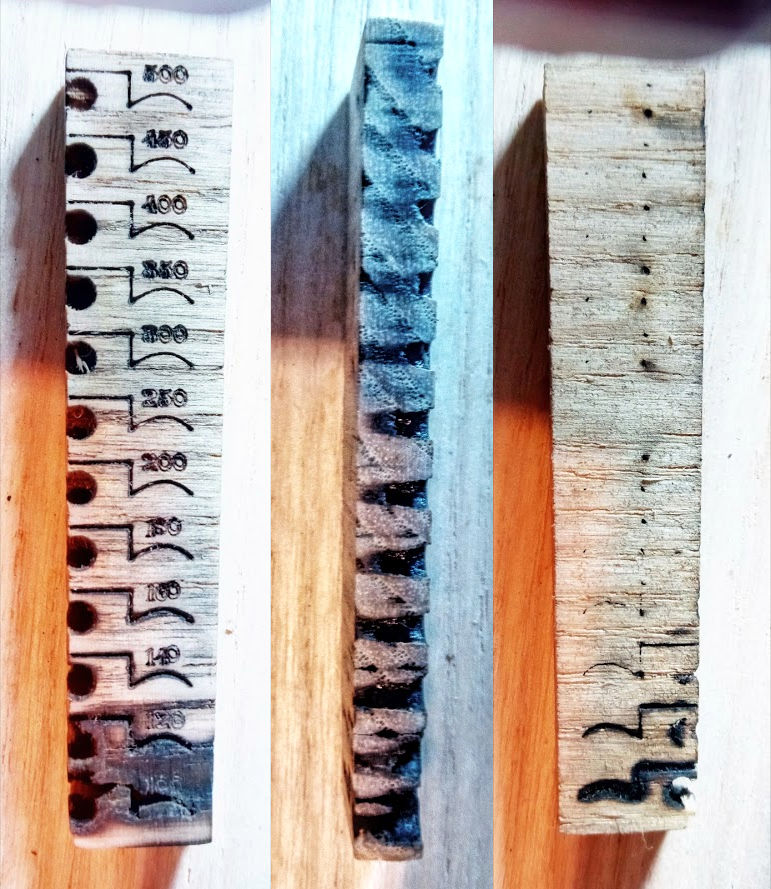 Or should I just pick a different wood?

Good news ! I just ran the test on Half inch Walnut and 100 almost got through and three passes at 125 cut it with a minimum of charcoal. So that means the Paduk and Walnut are ideal woods and from my tests I think Maple might be there too! 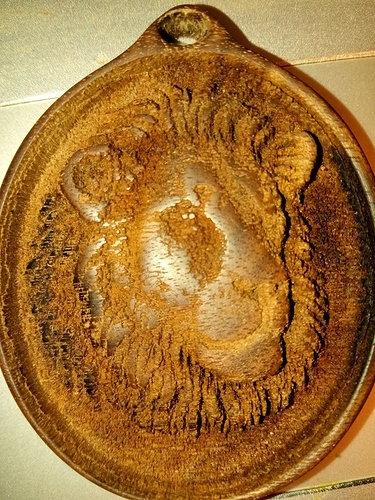