I ordered a box of extras from Green Valley. All are 3"x12" and almost half of them are in the 0.35" to 0.40" range and none of them are thinner than 0.2" with one at 0.48" no exotics but many I am not sure what they are and of course a lot of knots and blemishes as expected even termite damage that was not expected.

I figured much would be experimental and scrap but with half near 0.40 I would like to be able to use it. Has anyone else been the guinea pig in this or do I get to be the first explorer?

It’ll depend entirely on the species. Poplar and maple will probably cut pretty well at that thickness, but purpleheart and zebrawood are going to give you a hard time.

Do you know the species?

What @evansd2 said.
I’ve cut through 0.5" of Pine relatively easily. For Sapele, I was barley able to cut ~0.25" deep after numerous passes.

Yeah Sapele is a straight up jerk.

Do you know the species?

All are American Wood no exotics. Maple, Cherry, Walnut, Oak,I recognise Hickory, Poplar,and Basswood not so much What I thought was Poplar, looking hard I think is Maple, but nothing like Purpleheart or any tropical woods.

You’re just going to have to test. I recommend writing the settings that work on a piece of masking tape and sticking it to the pieces (or at least labeling them so you can refer to the settings on some master list. I do both). It’s hard to keep track otherwise. I use re-stickable dots (chromadots) to label my woods. My collection is a bit out of hand, and I don’t know how I would remember anything if I didn’t label carefully.

You’re just going to have to test.

Yes, as all are so small, testing a piece will provide the answer for that piece, and leave it without enough to actually make something from it, A lot of the 12x24 pieces work out well as I cut then to 19.5 " long and have an end piece ti test on. When ordering specific species it makes it easier to tell which species it is, but on many of these white wood with some brown streaks is all you can see, or darker wood with a flamey grain, unsanded and not oak would be??? The Cherry is pretty distinct but even the Maple and Walnut could be something else.

Perhaps cutting out knots will reveal the best settings, but it will be only good for that piece with little of it left. however it will give me a sense of the range of the rest.

the first test worked out pretty well. the piece is 2.8"x 2" x 0,38 near the top of the head, but it took about 9 passesand overcut some with flashback and was 1/16 or so thick at the worst places and I ended up cutting it out with a saw. 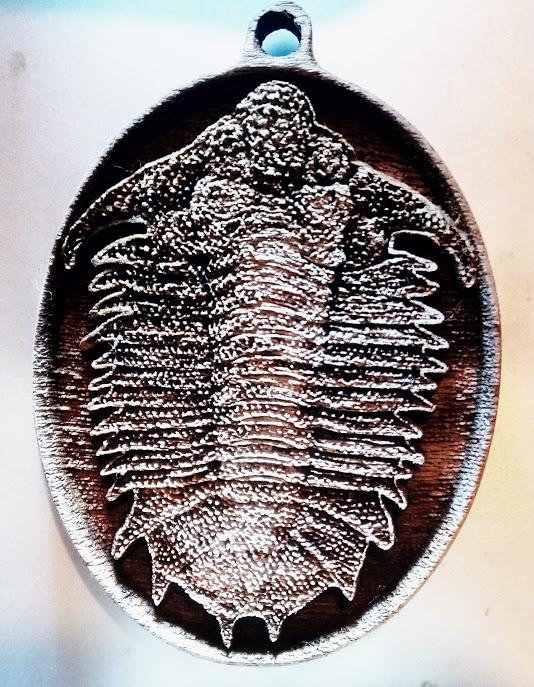 I use this shape to do so (SVG attached):

I made a few changes. But left in the GFUI you should have to set it up only once. the engraved circles should be twice the speed indicated for a full range and all at full power or other [power specific to the piece.

Nice changes, I’m sure it’ll work well for you. Hopefully you can figure out your wood samples and lose only the minimum useful material.

Thank you to both of you for this nice tool to add to my test kit.

Does someone mind telling a newbie exactly what to do with that file? I’m guessing there is more than just loading it and hitting ‘go’ LOL. Do I need to set up my GF for each color to represent a certain speed or power? This ‘little’ fact seems to elude me with files such as this.

When you load it, each color / operation will have its own little thumbnail on the left side of the window.

You can then go back to the home screen and make a copy of the pattern, and change the power to 50% for the lines and dots. That gives you two tests to run. As you get to where you want to fine tune it more, you can save additional copies at different power settings that you can use for thinner/softer/harder/thicker materials. You’ll get a feel for where to start pretty quickly.

Thank you so much. You explained that so well! Will definitely tackle that in the next few days! I have learned so much here. Pretty much have just been stuck on understanding this part AND haven’t been able to engrave a photo yet. Soon though!

can you resend attachment?

It’s already uploaded in my post above. Here’s a link in case you don’t know how to do the right-click trick on an image…

Hilariously, clicking on that makes it look like your screen is blank. It’s a big svg, you have to scroll down. Just save it from the browser with control-s (cmd-s on mac) once you have it open.

thanks- did not know that trick!

I have the cutting ok now- but can’t figure out alignment on passthrough slot. I am just trying to cut circles and have them line up in rows and when I try and line it up on the screen it cuts in a different place.
Any tips that aren’t too technical?

Two things. First run the Calibration so the specific match of what the lid camera sees matches actual places. Then you want to use the set focus so the exact place and height are measured relative to a specific place. This should get the result within a millimeter or so.